Ask a group of urbanists what makes a successful city, and they will agree on one thing – getting people out on the street, to inhabit public space and mix with their neighbours.

In Canada, there’s one problem with that: The weather. During the winter, Canadians are not very good at gathering in public. We may head to the rink or the ski slopes, but not onto the streets where we live. Our parks and public spaces are built for the warmer months and too often lie fallow when the snow falls.

The exception is Quebec, where celebrating winter is a venerable practice. The province’s winter calendar is ruled by the Carnaval de Québec, which begins this week, and newer festivals including next month’s Montréal en Lumière. Today, Quebeckers’ embrace of the cold is inspiring a change in urbanism in the rest of Canada – a move toward “winter cities,” a shift in attitude that champions changes to the city’s form and events that transform our cultural sense of the cold months. 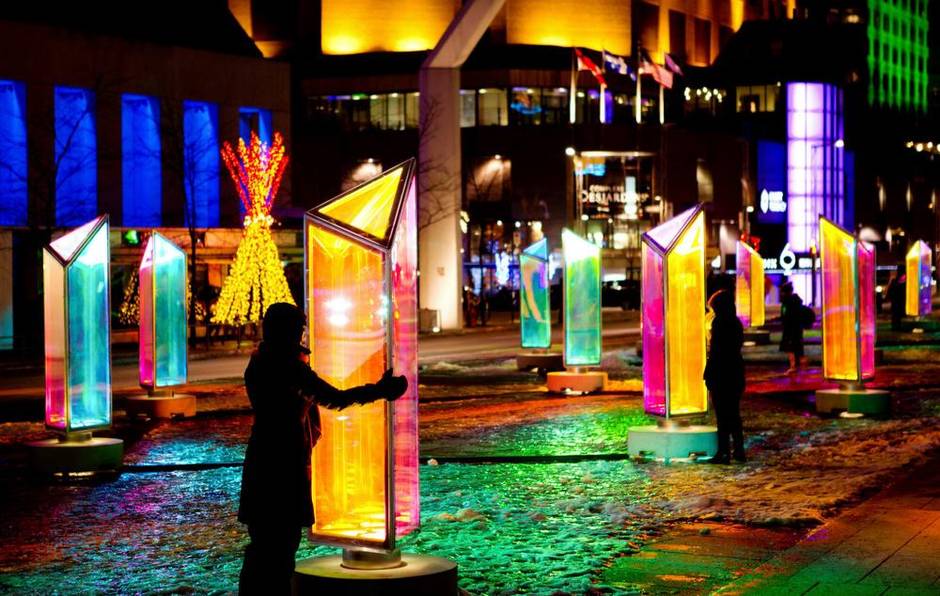 In Montreal, where there is a tradition of vibrant public spaces, the city is employing contemporary art and design as tools to build community in the colder months. Luminothérapie, an exhibition of interactive public art, has livened up the Quartier des Spectacles cultural district for five winters running. This year’s version includes two installations, chosen through an international competition. One is Fascinoscope, a collection of interactive games and video projections with a carnival theme designed by Montreal’s Luz Studio; and in the area’s main square, Place des Festivals, is an installation called Prismatica by Toronto’s RAW Design. 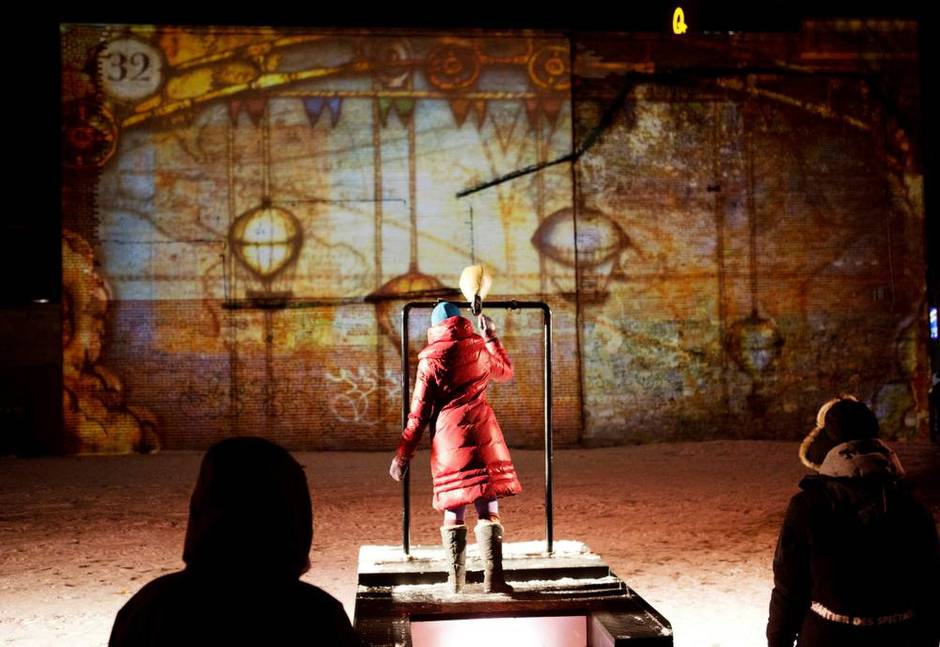 The latter fills the plaza with 50 “prisms” – translucent columns lit from within and coated with a special film that refracts light in a changeable manner, emitting a constantly shifting array of colours as you move past them.

They’re set on rotating bases so visitors can spin them around, sending rainbows across the Place des Festivals, and are accompanied by ambient sound effects.

The project, designed in collaboration with Atomic3, Jean-François Piché and Dix au carré, has had the desired effect. Toronto architect Roland Rom Colthoff, who leads RAW Design, found himself inspired by the sight. “It’s full of people at all times,” he says, “even on the really cold days.”

Capturing that effect (and the sophisticated year-round design of the Quartier) is a goal for urbanists across Canada. In Edmonton, a conference this week will bring civic leaders, activists and planners to share ideas and wisdom on building winter cities.

It’s Susan Holdsworth’s job as Edmonton’s WinterCity co-ordinator to persuade her neighbours to get out in the cold, a process she understands requires a change in viewpoint. When she moved from Toronto to Edmonton, people warned her about the weather in a city where the cold lasts 150 days. “Over and over, I was told how horrible winter was,” she recalls.

In truth, she says, it’s not that bad (Edmonton is relatively sunny and dry; humidity has an important impact on how we perceive cold). But the WinterCity strategy aims to take the perceived challenge of the city’s climate and make it into an asset. As Holdsworth explains, Edmonton is trying to change the physical design of its streets and public spaces through new guidelines (see sidebar). But the more immediate, and arguably more slippery, problem is to make people love winter. For local businesses, that would mean more patrons; for citizens it would mean a better quality of life than one can get snuggling inside under a blanket. The biggest obstacle, Holdsworth says, “is attitude. For Canadians, not just Edmontonians, the approach has been to hide inside and use things like pedways.”

Those elevated walkways that connect buildings in downtown Edmonton, like the Plus 15 system in Calgary, are emblematic of the way architecture and planning in the 20th century tried to approach nature: by closing it off and securing everyone in climate-controlled comfort (think parking garages). “A lot of the design approaches were to take you away from the weather and to protect you from it,” Holdsworth says. It’s a remarkable blind spot for a people whose national identity is so bound up with the north. 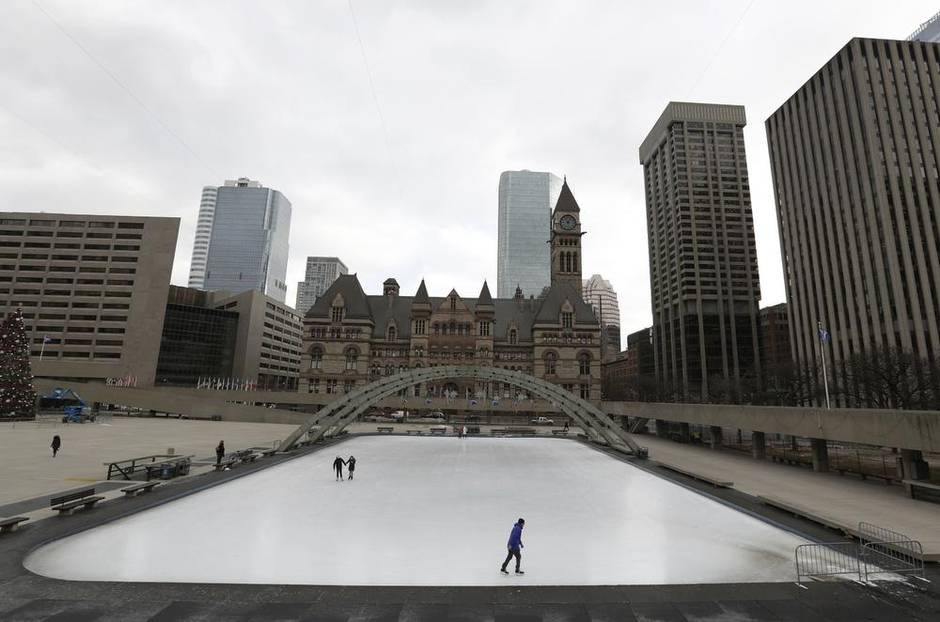 : Nathan Phillips Square in downtown Toronto in winter. Parks and public spaces are often more inviting in the warmer months.

RAW Design is hoping to warm up frosty Toronto with a project, Winter Stations, which opens next month and promises to animate the beaches along Lake Ontario east of the city’s downtown. RAW (together with public art consultants Curio and landscape architects Ferris and Associates) took five lifeguard stations that dot the beach as their starting points and launched an international design competition. The winning submissions will wrap the lifeguard stations in creative constructions.

Colthoff of RAW Design hopes this will draw curious people to the water’s edge – which is largely empty for months each year. “It really is a remarkable landscape, even in winter, the lake and the beach and the ice – and people don’t go down there a lot,” Colthoff says. “The thought was, how can we warm this up, at least symbolically if not physically?” The lifeguard stations will also serve as works of conceptual architecture that get seen by a broad audience. 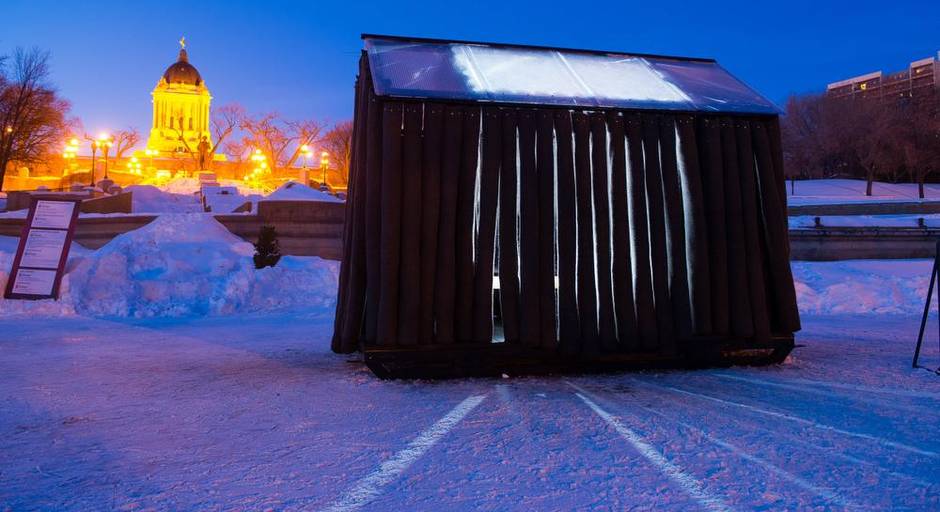 The warming hut competition was launched to help create a place for people to warm up while skating. (Dan Harper)

Another hot spot, in this respect, is Winnipeg. In that city, the Warming Huts at the Forks has been an unlikely rallying point for the local design community, and Winnipeggers at large, since 2010. Local architect Peter Hargraves kicked the project off with some friends who had modest intentions: create a well-designed place for people to warm up while skating on the river. Before long the competition was drawing hundreds of international entries and global publicity.

Each winter, the skating trail at the Forks is a popular local attraction that’s served by the huts and by RAW:almond, a restaurant housed in a temporary structure. “I think 10 years ago, people would have thought you were crazy if you told them there would be a restaurant on the ice,” Hargraves says. “Now it’s something that people expect.” 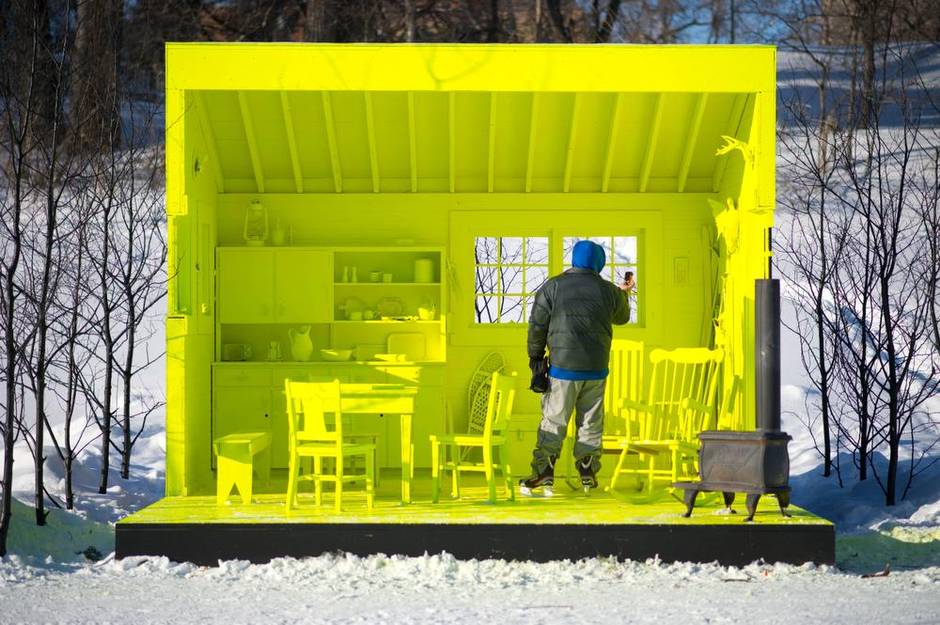 In Winnipeg, the Warming Huts at the Forks competition has evolved into an unlikely rallying point for the local design community.(Dan Harper)

Not surprisingly, Hargraves lived and worked in Quebec for six years, and both aspects of the warming huts – the open architectural competition and the openness to winter – reflect his experience there. Yet, he argues strongly that such efforts can and should travel. “Every Canadian city has its own unique wintertime features. I think it’s amazing to see a place like Winnipeg taking on the feeling that there’s something here that is special to us.”

In Edmonton, Holdsworth says, the process of public consultation has begun to create a similar sense. “We are a winter city,” she says. “It’s about making the most of that in every aspect: for tourists, for people here to enjoy wintertime, and making the most out of the place we have.” Street festivals in February can be wonderful, she says – but don’t forget to dress warmly.

Winter in the city

Sunshine
Buildings and city blocks should be arranged to maintain exposure to direct sun, especially from the south.

Shelter from the wind
Short blocks, with staggered corners and mid-block courtyards, reduce the impact of wind.

Colour and light
Architecture, as well as public art, should use bright colours to provide visual interest.

Fire
Open fires – as in gas-fed fire pits – can psychologically and physically warm a place up.