The bottom of a highway overpass. An empty field under a rail line. A parking lot next to a bus stop. If you’re going to transform the contemporary city, these spots are not obvious places to begin. And yet a recent ideas competition turned the attention of almost 300 designers to just such marginal places.

“These are the kind of spaces in between that are often overlooked,” explains Amery Calvelli, a co-founder of the non-profit d.talks, which ran the Calgary-based Lost Spaces Found competition. By focusing on these fragments of public space, the effort suggests that small-scale changes really can make large impacts on the culture and ecology of a space. “The idea was to really stretch how we think about the city,” Calvelli says.

This was an ideas competition. The winning ideas are not necessarily practical – but they have germs of achievable concepts that may help change how Calgary considers its public spaces.

It reflects an approach that is beginning to change the fabric of North America’s cities.

As downtowns have become more densely populated, walking and cycling have become increasingly present on streets that used to be dominated by cars. This has turned the attention of professional urbanists, landscape architects and architects toward repairing the pedestrian realm. The wisdom of Jane Jacobs – who argued for a dense, intricate city where people had the ability to walk and reasons to be on the street – now occupies the mainstream of urban planning. New York pushed this agenda hard over the past decade, turning road space into public plazas and then making them permanent.

But impatient citizens have also taken their own DIY actions – improvising “parklets” out of street parking spaces in San Francisco, or in the case of the group StopGap in Toronto, building ramps that allow people with mobility issues full access to storefronts. These efforts are often called tactical urbanism, a term coined by the planners Mike Lydon and Anthony Garcia, and that startup model – of small change done fast and without worrying about bureaucracy – resonates with many youthful city-dwellers.

Calgary, despite the local importance of the oil and gas industry and its car-centric urban form, may be receptive to such change. The city is developing a sustainability plan that includes a strategy to encourage walking. Lost Spaces Found speaks to this context: “When we’re trying to build more excitement in the public realm,” Calvelli says, “these spaces offer an opportunity for that.”

The winning range of projects “was vast,” she says, “from greeting cards, or play interventions, to a railway that will change over decades.” Here are three of the winners, from the broad-brush to the fine-grained. 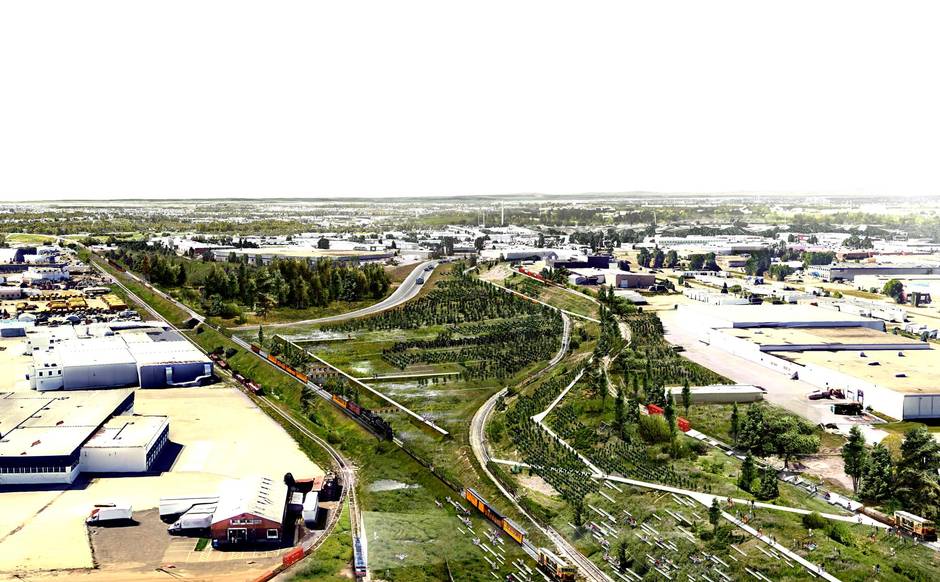 The first-prize winner in the competition is the brainchild of the Colombian design office LAP, and the plan thinks decades into the future – like many works of landscape architecture today, it imagines parkland that will mature slowly over decades, providing different experiences along the way. Lost Railway looks at three sets of spaces that cut through Calgary: the Bow River’s floodplain and slopes, the Deerfoot Trail and disused rail lines. LAP imagines naturalizing these areas, to start: planting rail corridors with seedling trees, in large numbers, and introducing new wetlands along the river. In time, the seedlings could be transplanted to the highway corridors, cultivated in place and then, once they mature, some of the wood could be harvested to build boardwalks, benches and other structures. “In a way, the park will be creating itself over time, drawing on its own resources,” says architect Edgar Mazo of LAP.

At the same time, the park would turn old rail lines on both sides of the Bow River into linear parks, repurposing boxcars and flatbed cars into new park uses – as giant planters, as pavilions, as café space. (This is a familiar trope in park design today; since the blockbuster success of New York’s evocative High Line, a number of North American cities have tried to turn their own rail networks into park space.) In Calgary those rail cars, familiar objects, would help to bring an identity to a series of spaces scattered across the area. The goal, Mazo says, is “breathing new potential into what’s been abandoned – into what no longer has an obvious function. Reusing the train cars allows us to do two things at once; it’s injecting a new use into something … and it allows us to give a unity and a very strong visual identity to the park.”

Central Calgary has many highway overpasses; this public-art proposal, from the young Spanish architects Jorge Sanfulgencio and Julio Romero, imagines taking advantage of the space underneath them. The two designers imagine a “constellation” of parks in the space under these underpasses – with uniform, hardy plantings on the ground, and artwork above. The art would be depictions of the night sky, a smooth membrane pierced by points of LED lighting to mark the constellations. The designers imagine them scattered across the downtown, with a large cluster around the Langevin Bridge that would link naturally with the Bow River pathway – places for contemplation and also landmarks for meeting up. It’s a smart and workable idea that echoes similar projects across the world; one of the best is Toronto’s Underpass Park, which shows how a little bit of lighting, a bit of art and the right sort of activity can activate this sort of dead space. 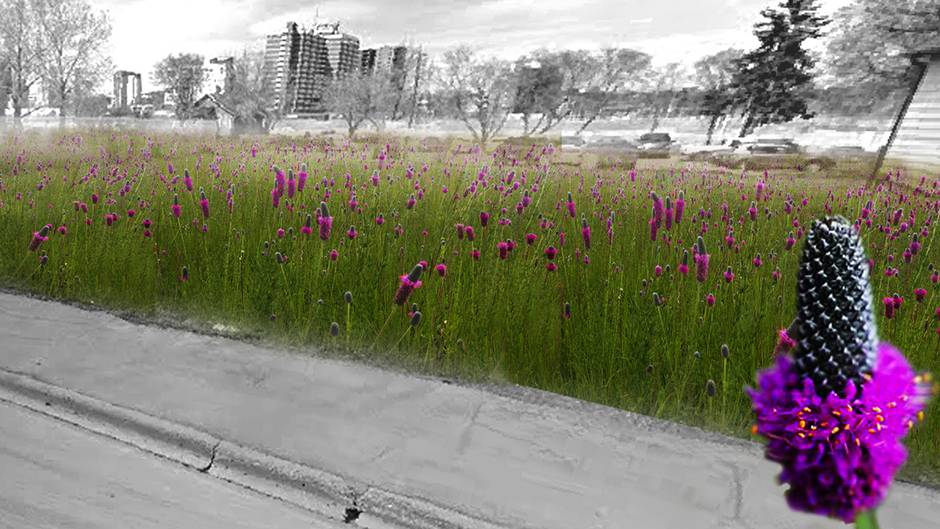 This project would look to the city’s ecology and its past – planting local plants to evoke the landscape before settlement and the peoples, such as the Sarcee and the Stoney, who lived within that landscape. Stands of grasses (such as the perennial blue grama) and flowering plants such as the low-growing scarlet globemallow, would occupy boulevards and medians along the crosstown route of Calgary Transit’s 412 bus. “These plants once blanketed the land where the city now stands, and played a pivotal role in the culture and ecology of native communities,” designer Casey Collins writes, “yet any reference to this original landscape seems to have been lost in the transition from rural to urban.” Those particular species had cultural resonance to peoples in the area – blue grama was used to forecast the severity of the coming winter.

Collins and partner Judit Urgelles also imagine a mural that depicts the strength of prairie grasses, with their deep and wide-ranging root systems, painted onto an underpass that the bus rolls through each day. Collins suggests that the project would invite commuters “to engage a little more with the environment around them. The same way everyone gets excited when a tree starts to leaf up or that first crocus emerges to signify spring – we believe our project can weave dynamic and exciting elements into an otherwise banal daily journey.”

That is a modest goal – but it shouldn’t be overlooked. Such small moves can help create a sense of place, which is invaluable. Lost Spaces Found will succeed if it helps encourage a sense of Calgary as a walkable, permeable landscape full of possibility. “There’s more awareness, among the public, of opportunities within our cities,” Calvelli says, “of how simple things can make a difference.”

The winning entries to Lost Spaces Found are being exhibited at the Contemporary Calgary/C2 at Calgary City Hall, May 7 to 23.