If these walls could talk…

These ones do, sort of: Resembling geological strata, within each layer there lurks a story. That darker band calls to mind a sunny day filled with birdsong; above it, a lighter one recalls a rainy day; and that one, there, contains the memory of a great conversation that took place on the construction site.

That's what living in a rammed earth home is like. And, better still, combined with those fossilized memories is the warm yet unexplainable feeling of security and peacefulness that comes from surrounding oneself with this ancient building method. Is it a vestigial emotion from our cave-dwelling days, similar to the feeling we get from watching a bonfire? Or something else entirely?

In Ontario, only retired high school teachers Sylvia Cook and Stephen Cavalier know for sure.

This 50-something couple is not merely the proud new owner of the province's first rammed earth home, however. Their new company, Aerecura, also built it: "It's the most sustainable system that I came up with," says Ms. Cook of her extensive research, "and because of that, I had, right from the start, the idea that this was going to be the model home for the business."

To ensure it would be an appealing showcase for potential clients, Aerecura hired award-winning, sustainable architect Terrell Wong for some "wow factor." And while that wow is biggest in the living room, where a wavy-patterned feature wall stretches to the ceiling (and yes, the couple can tells stories about the day each layer was created), this is a home that can back up the sexy with substance. From high-tech, triple-glazed German windows and low-tech passive solar, to minimal maintenance and energy savings like you've never seen, there is much to tell about this two-and-a-half-storey home.

But first, a quick overview of the rammed earth process. Evidence of rammed earth has been found as far back as the Neolithic age, and it gained popularity in North America in the 1800s. Little has changed in the construction process since then. A mixture of slightly moistened sand and gravel is shoveled, a little at a time, into wooden formwork, which is then compressed (or tamped) using tools. Different coloured layers in completed walls – now as solid as stone – mark when new batches of mix were poured. While early builders used a little clay for stability, today it's a small percentage of Portland cement (the Cook/Cavalier home used 5 per cent); similarly, pneumatic dampers have replaced hand tools. Waterproofing agents can be added to the mix, as can tints for visual variety. Builders stand, literally, inside the formwork and tamp their way out; this can be difficult when rebar is added for further stability. In colder climates, insulation is placed directly inside the walls: the Cook/Cavalier home boasts six-inches of Polyiso between two six-inch layers of rammed earth.

The result is a home that needs no exterior or interior cladding, is quiet, maintenance-free, and naturally keeps temperature and humidity levels relatively constant regardless of external weather.

A few years ago, Ms. Wong met with the couple at their then-empty site near Colborne, Ontario. The three sat in the meadow to discuss what could be done; since rammed earth is already so energy efficient, the group decided to aim for the Passive House Standard – a rigorous standard first developed in Germany – using modeling software (Ms. Wong is the president of the non-profit organization Passive Buildings Canada).

Problem was, the best views on the sloping site are to the east, and south-facing windows work best to trap heat in the walls (although there is a small radiant floor system on the main floor, the sun is the primary heating system: heat is absorbed into the walls and then disperses, slowly, throughout the day). Ms. Wong's solution was to aim the building to the east, but "wrench" the walls outward – turning rectangle into trapezoid – so they'd soak up some of that precious south light.

On the south wall, above the home's library mezzanine, a checkerboard of large windows directs sunlight onto the large feature wall. It's elementary building science at its finest: "That's my favourite subject – isn't it frightening?" laughs Ms. Wong. "Design is very important to me but building science, I don't know, they've got to both be there or it's not worth my while."

The result: In a year, the Cook/Cavalier home consumes less than 120 kilowatt hours per square metre, which is eight to ten times less than an average building.

It's hoped that this stunning sustainable fact, combined with the home's durability and natural beauty, will motivate customers to work with Aerecura. "My best vision for the future," finishes Ms. Cook, "is that when all of the stick-frame subdivisions are falling apart – which they will, we know, in 20 to 30 years – we, as a company, and I hope other companies, are poised to replace that housing stock with rammed earth."

And the more layers, the more stories.

Harbourfront exhibit asks, How much space do we really need?
February 9, 2012 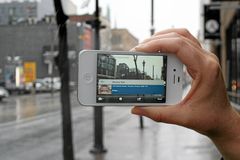 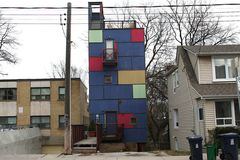 See the cozy confines of a dirt-built home
Gallery
February 15, 2012 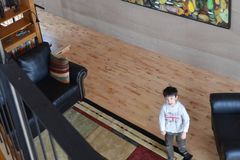