Toronto's Little Portugal is an old downtown residential neighbourhood that's gradually gentrifying, hence becoming less distinctively Portuguese (and Brazilian) all the time. But the demographic shift isn't the only change the district is destined to undergo. The rather tired low-rise stretch of Dundas Street West that runs through the area's heart is ideal for the new mid-rise housing that city planners want to see on our arterial routes. Architectural transformation is afoot in Little Portugal.

The 600,000 new citizens we're expecting to show up here over the next 20 years, so official reasoning goes, must have safe, comfortable places to live. If these people are not going to be pushed out into suburbia – an unworkable option for all kinds of reasons – room must be made for them in the central city. Very little undeveloped land is available for new homes in downtown Toronto, which means main streets traditionally lined with low-rise buildings (such as Dundas Street West in Little Portugal) will have to be redeveloped and intensified. It's not a perfect scheme. But if anybody is proposing a more hospitable or sensible way for the city to accommodate our new neighbours, I haven't seen it.

You can get a rough sense of how the refashioned streetscape of Little Portugal could appear some day by glancing at artists' impressions of the new residential development called Abacus Lofts, slated to rise on Dundas Street, just west of Ossington Avenue. (To see the renderings I have in mind, click on www.abacuslofts.com.)

Ignore, for a moment, the unusual form of the Abacus façade – I'll get to that presently – and pay attention to the built forms you find arrayed along the street.

There are some old, short structures still standing, their traditional glass storefronts pressed up against the sidewalk. Nobody, as far as I know, is proposing that the low-rise buildings so characteristic of Toronto's principal avenues be swept away entirely. In fact, the glassy ground floor of Abacus reinforces the traditional hard edge where main-street urban fabric meets the pedestrian and traffic corridor. What's new here, of course, is the sudden jump in scale from a two- and three-storey roofline up to a chunk of architecture eight storeys tall.

As the city's thinking about our wider avenues becomes reality over the next several years, such mixtures of scale will become commonplace. That doesn't mean we will like them right away. It will surely take a while for us to get accustomed to seeing larger residential stacks on formerly low-rise streets. But the architects of mid-rise buildings won't be doing Torontonians any favours if they try to mute the strong rhythm of the coming streetscape – by, let's say, making their structures as timid and inconspicuous as possible.

What's needed, instead, are bold celebrations of the difference between the small Canadian city we inherited from our Victorian forebears and the continental metropolis that is emerging in the 21st century. Because I believe this, I welcome the dramatic face that Abacus Lofts intends to turn toward the public realm of sidewalk and street.

Crafted for developer Antonio Azevedo by Richard Witt, partner in the Toronto architectural firm of RAW Design, this condominium project is no bully, but it knows it's younger and bigger than the old-timers on the block. It makes no bones about the fact that it's different. (On Monday, Mr. Witt goes to work as a principal in Quadrangle Architects.)

Instead of keeping to itself and remaining tamely parallel to the nearby traffic lanes, for example, the façade breaks wide open, its upper levels swinging out laterally and variously toward the street from a hinge on the building's north-eastern corner. And instead of trying to make his structure's surfaces blend in with the antique brickwork round about – in homage to the "contextualism" in vogue at city hall – Mr. Witt has emphasized the contrast between new and old by cladding the jutting volumes of Abacus in charcoal grey concrete panels.

We can hope that the other designers called on to create Toronto's next generation of mid-rise facades will follow Mr. Witt's lead. But is it too much to ask that developers inject more inventiveness into the product lying behind the façades?

Like almost every other new mid-priced condo project in this city, Abacus Lofts is chiefly suitable for singles, young childless couples or empty-nesters. (Sizes range from 469-square-foot one-bedroom units to two-bedroom-plus-den suites at 1,284 square feet.) Would-be homeowners of modest means who love apartment living, don't want a house, but want to bring a few kids into the world have virtually no place to do so in this town.

This fact about the Toronto housing market will probably never change. But as the Abacus complex in Little Portugal reminds us, the architects of our mid-rise future can help shape the image of the city in fresh, bracing ways.

Editor's note: This online version has been changed to correct the title of Richard Witt, partner in the Toronto architectural firm of RAW Design. 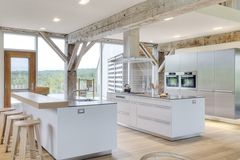 The next generation semi-detached
January 19, 2012 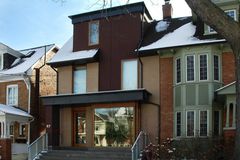 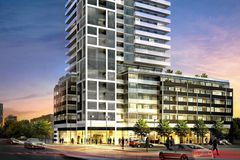