Skip to main content
WILL JONES
Special to The Globe and Mail
Published November 13, 2014

How often have you sat in a cottage by a lake and dreamed of building your own perfect house right in that spot? The ideas are quick to flow and the wish list quick to grow but taking these daydreams any further is a big step and one that soon gets forgotten on the drive back to the city. This was not the case for Chris Meiorin, though. Visits to his sister’s cottage on Drag Lake in the Haliburton Highlands were treasured family time and he knew that one day he’d build his own cottage on that very same lake.

For 10 years Mr. Meiorin, his wife Susan and two daughters, Rachel and Taylor, visited the Viceroy home that his sister owned. They lived out many of their summers at the cottage and his children grew up on Drag Lake. During that decade, and during the many journeys back to his north Toronto home, the plan to have a house designed and built on an as yet unfound property on the lake slowly formulated in Mr. Meiorin’s mind. 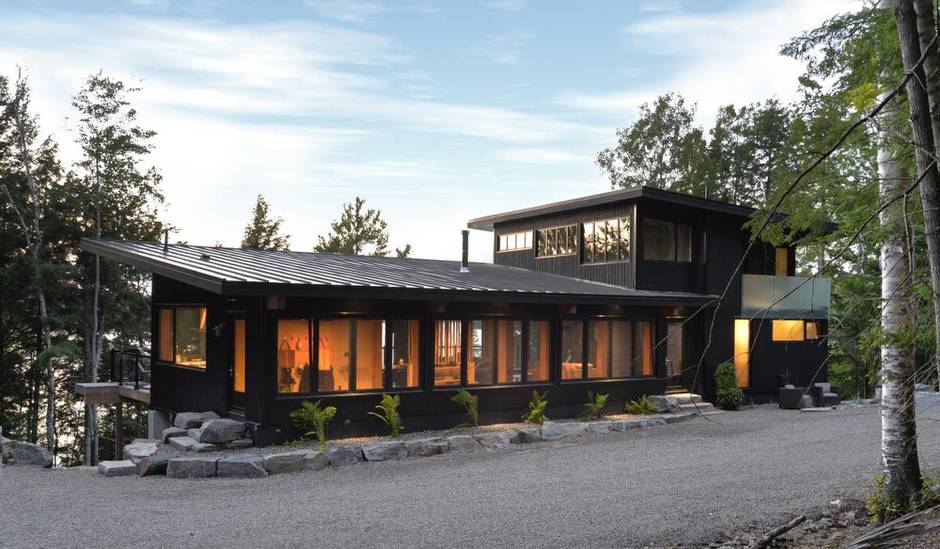 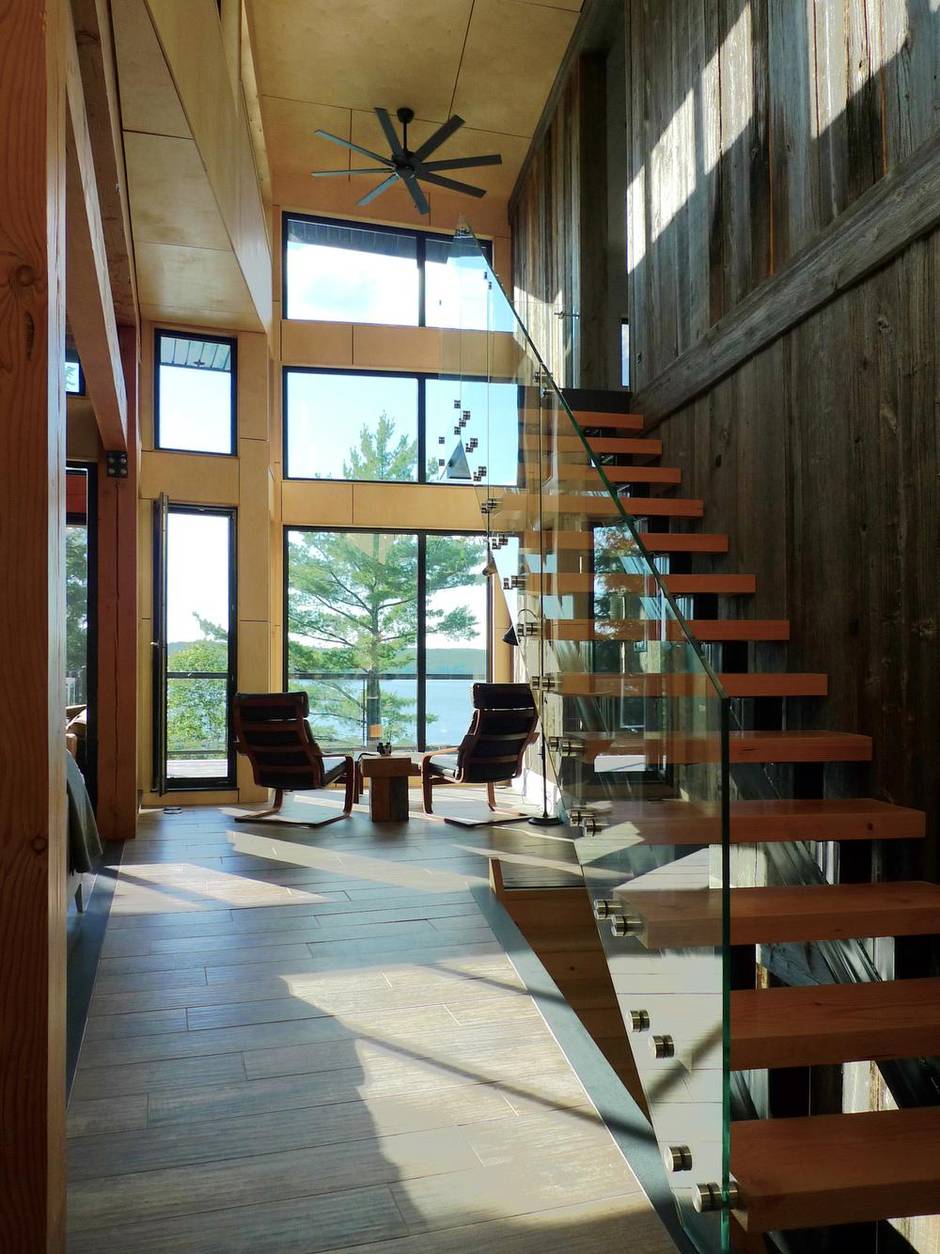 “The time spent at my sister’s cottage was invaluable,” says Mr. Meiorin. “I was learning what I wanted for my house by living in that one. I got to experience the good and the bad of that cottage and then build in the highlights or iron out the kinks in what was then the hypothetical design for my own cottage.”

Bringing an architect on board upped the ante for Mr. Meiorin. Brad Netkin, of Stamp Architecture, was a friend. He was invited to stay at the Viceroy “to begin to understand my ideas and aspirations,” says Mr Meiorin, and the duo began a five-year journey that would result in Blackbirch, the stunning 2,400-square-foot contemporary cottage that stands on the southeast shore of Drag Lake today.

We have teenage children and I know that they don’t always want to be sat with mom and dad, especially when they have friends to stay. … They can be partying in the Muskoka room while we’re hanging out in the kitchen.
Homeowner Chris Meiorin

Cloaked in black, the building reads as two distinct volumes. The main living areas are single storey and clad in corrugated steel, while the more private sleeping quarters range over two floors, which are sided in timber board and battens: The former is lined with large windows on all three of its exterior walls, the latter more enclosed, windows punctuating the vertical striations of the facade.

“Separating the living and sleeping spaces was at the forefront of my mind,” Mr. Meiorin says. “The Viceroy had bedrooms laid out around one main living room and I know from experience that you didn’t get much sleep if there was a party going on in the next room!” 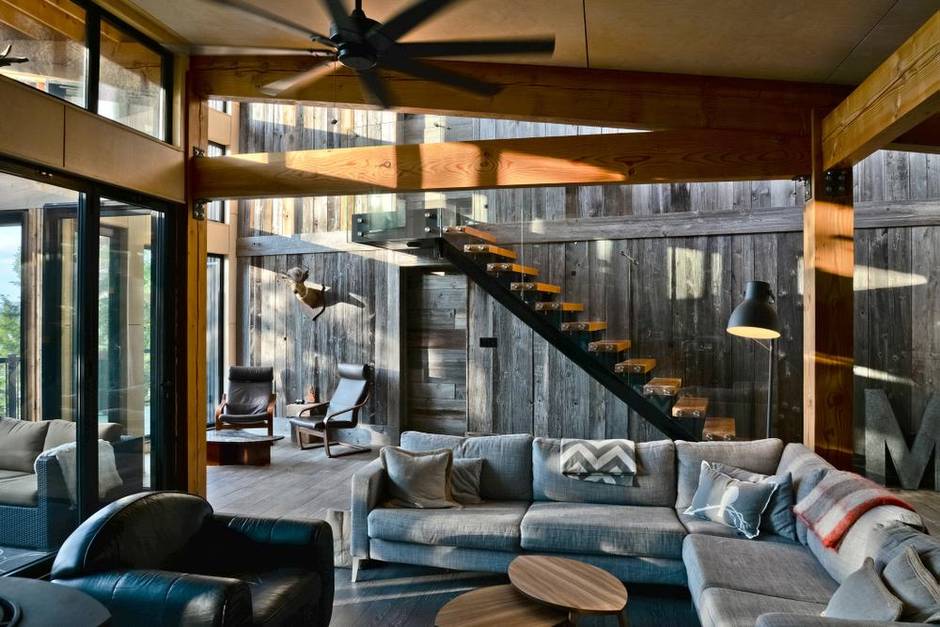 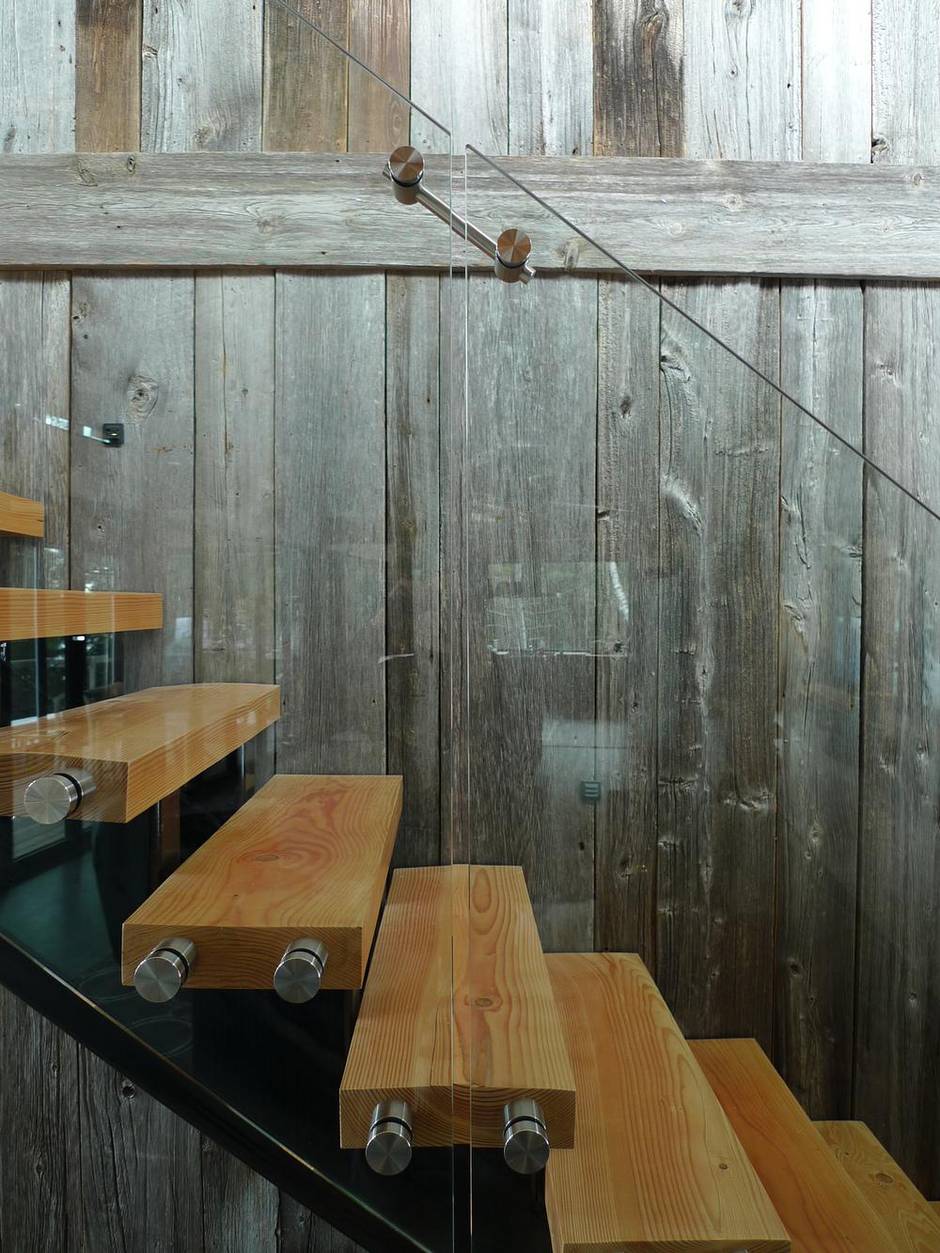 Within Blackbirch, a monumental, two-storey barn board wall is one of the talking points of the home. It is also the separation of living and sleeping quarters, and, acoustically insulated, it is a buffer between the two areas.

Bedrooms for the kids and guests are on the main floor. They are cozy, the compact rooms designed efficiently to include storage space. Upstairs is the more expansive master suite, which includes bedroom and bathroom, plus a secondary living space for times when the owner or his wife feel the need for a little privacy. All rooms have wonderful views of the surrounding forest, through windows that are tinted to reduce the solar influx and create a calming atmosphere. 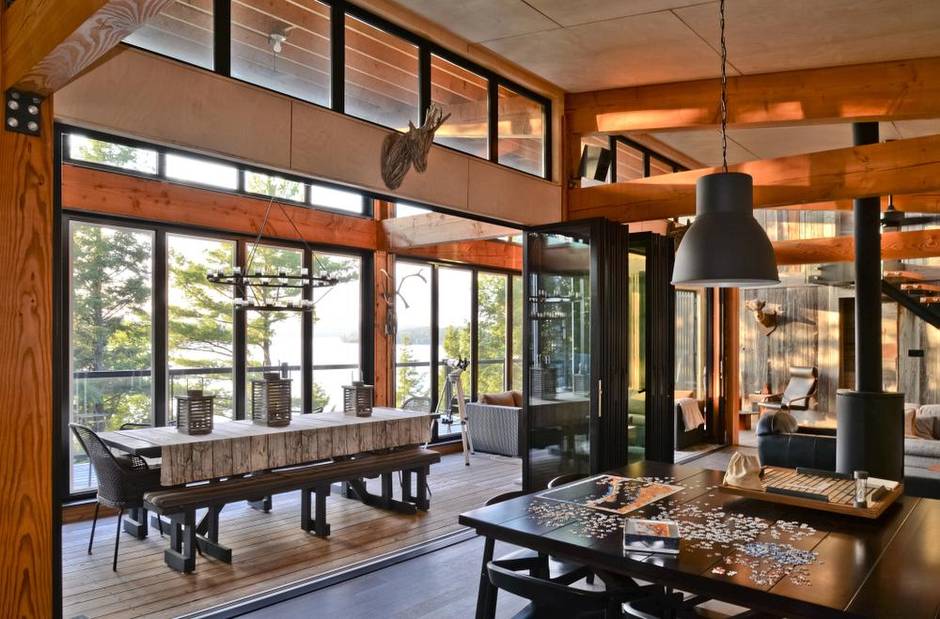 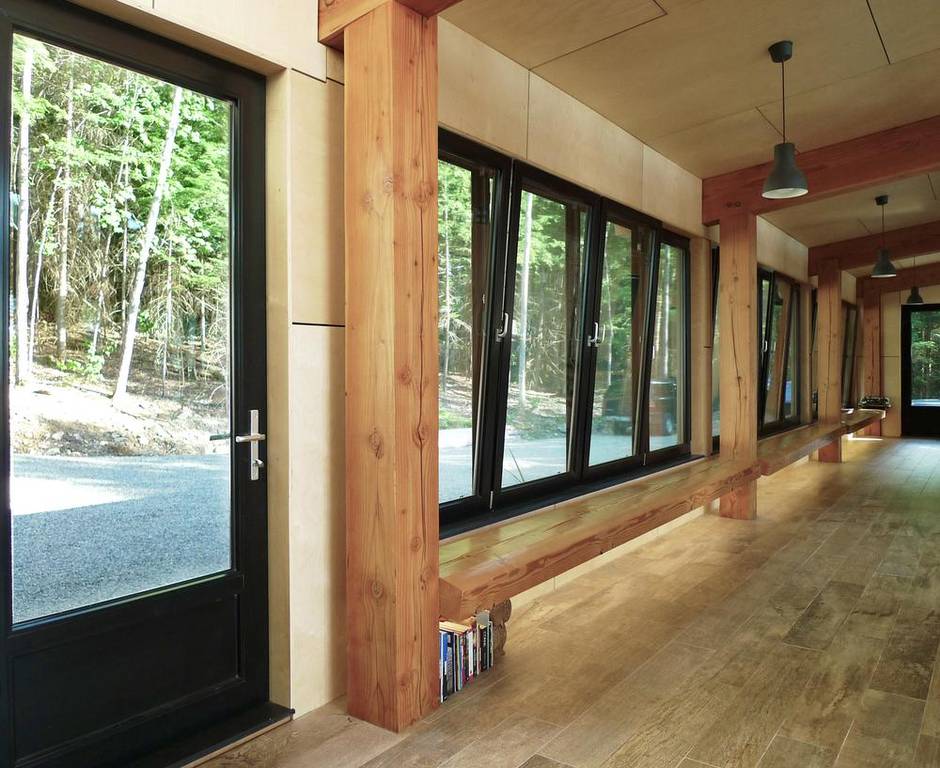 The main living space is itself split into numerous areas, which Mr. Meiorin likes to refer to as congregation spaces. All linked visually but denoted by furniture or glazed walls, the kitchen, dining, living room and Muskoka room offer space for the family and friends to spread out while still being together. The clever, open-plan layout offers different groups the chance to do their own thing without interfering with each other.

“We have teenage children and I know that they don’t always want to be sat with mom and dad, especially when they have friends to stay,” says Mr. Meiorin. “They can go chat, do their thing while we do ours. However, I enjoy being with my kids and so having them present, even if not directly in the same space as me, is always a joy. They can be partying in the Muskoka room while we’re hanging out in the kitchen.” 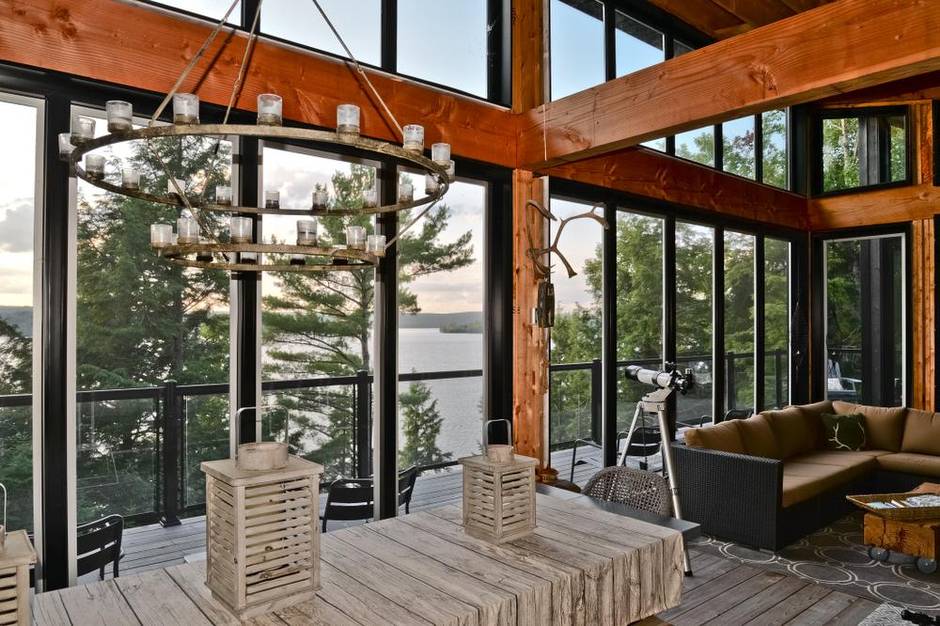 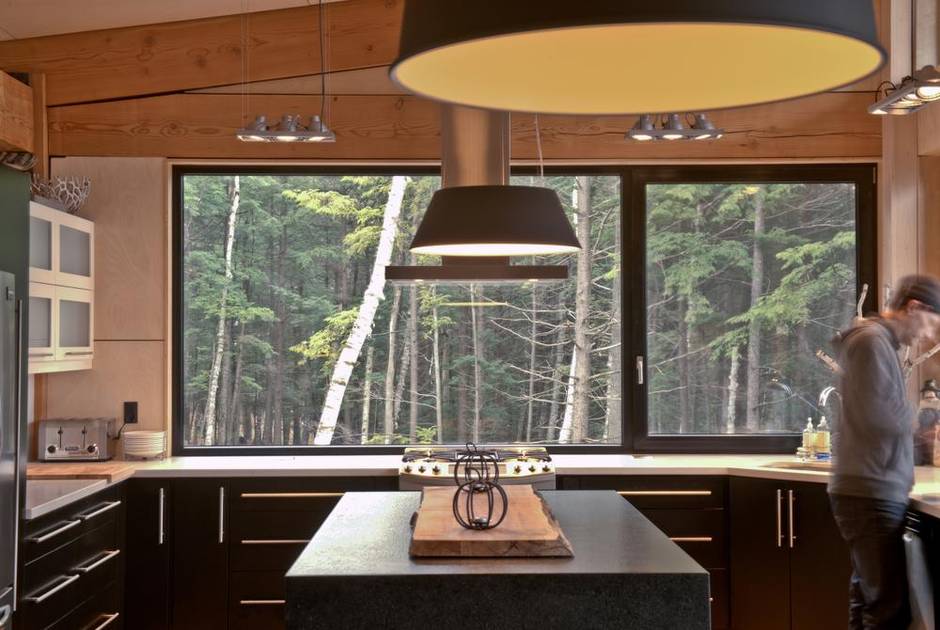 Connection to family and friends is vitally important to Mr. Meiorin. The expansive kitchen, with its wonderful picture windows offering views out to the lake and forest, is a favourite place to congregate. There’s a record deck set up in the hall space ready to spin vinyl at the slightest hint of a party. Board games and packs of cards are always at hand, and there is plenty of space to hang coats and a long bench – some 40 feet long – to collapse onto and scrabble out of snow pants and boots.

“We love company and we’re always inviting people back to the house, so it made sense to have a big space for them to get in and out of their outdoor gear,” he says, adding with a laugh “just another thing that I learned from the Viceroy and stumbling over piles of boots and coats in its tiny mud room.”

Blackbirch is a lesson in contemporary cottage living. It takes the fun times and frustrations from the traditional cottage experience that almost every Ontarian remembers and reworks them to suit the busy lifestyle of a 21st century family and their friends. 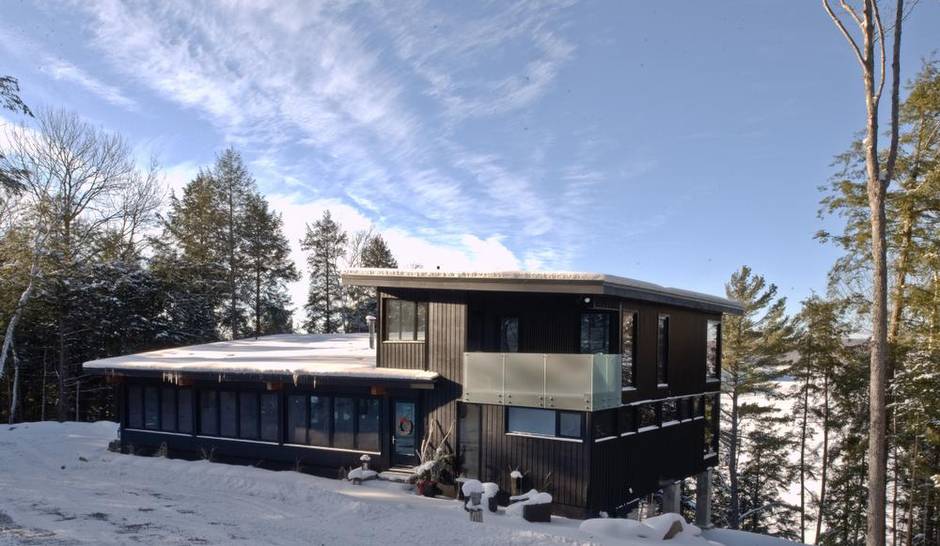 It is a dream come true for Mr. Meiorin; one that has been 10 years in the making but which was well worth waiting for.