What would an ideal new urban neighbourhood look like? It would be near the centre of a city, easily accessible by transit, by bike and on foot. It would mix residences and workplaces. It would be sensitive to its historical context, have short blocks and buildings that are sustainable, suited to the local climate and just big enough.

In short, it would look more or less like Zibi, the development emerging on the Ottawa River.

And yet, according to some First Nations leaders and activists, Zibi should not be allowed to proceed. Is this dead, polluted land, or sacred ground? Or both? Is it a new district that will help animate the core of the Ottawa region, or a land grab?

It depends how you look at it. Here is where contemporary city-building meets Canada's founding injustice – and where the symbolic duties of the capital run into the growth of a living city.

The project, by Ottawa-based Windmill in partnership with Dream Unlimited Corp., spans two provinces and 37 acres, on the Gatineau waterfront and two islands. It would eventually bring 1,200 condo apartments, office space, retail and a substantial amount of new park space to this place, just two kilometres from Parliament Hill. Along the way, the developers are committing to the One Planet Action Plan, a set of sustainability goals that is far more ambitious than the industry's standard LEED rating system. 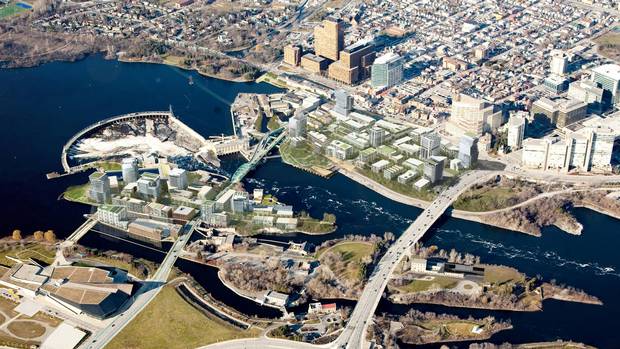 Industrial uses at the site on the Gatineau began in the early 1800s but native people say their ties to the waters and lands go back thousands of years.

The name of the development comes from the Algonquin word for “river,” but the place is best known locally as the Domtar lands, after the paper company that owned the site from 1998 to 2013. A few weeks ago, I walked through the buildings on the Gatineau shore. The complex of mills, now stripped of most equipment, is in a picturesque state of decay: 1920s brick-and-beam buildings littered with fifties filing cabinets, striped with sixties green paint, studded with eighties fluorescent lights and wrapped in a century’s worth of graffiti from the people who worked there.

The city of Ottawa was, in a sense, born right here: Since 1806, when Philemon Wright built the first mill there, these islands are where the forests of the region have been milled, ground and pressed into timber, lumber and paper. “This was the heart of the region,” said Jeff Westeinde, chairman of Windmill Developments, “and the industrial components of that history have been locked off for more than a century now.”

Right out the windows were the ring-shaped Chaudière Falls. Few people have seen them up close in the past 100 years, since the falls were dammed in 1908 to provide hydroelectric power.

If the Zibi development proceeds as planned, that will change; the master plan, by the architect and green-building leader Peter Busby of Perkins+ Will, calls for 22 per cent of the site to be open space. Together with a $150-million project by Hydro Ottawa that will bury turbines and provide a viewing platform, the falls themselves will be accessible for the first time in more than a century. “One of the key components of our planning strategy is to provide access back to the water,” Westeinde says.

That plan, developed with oversight from Ottawa, Gatineau and the National Capital Commission, emphasizes four- to eight-storey mid-rise residential buildings, with a scattering of high-rises and two new office buildings. The buildings will be designed by a variety of architects, Windmill says, to bring a diversity of approaches. The details of the plan are exemplary, from the arrangement of the streets – many of them pedestrian-first woonerfs – to the use of narrow, tall storefronts to provide varied and pleasant street life.

It would be analogous to what has happened in many North American and European cities: Dead industrial sites, which had been closing off the waterfront, are replaced by new, carefully designed mixed-use neighbourhoods and public space. Polluted ground is cleaned up. Rivers, lakes and oceans play a renewed place in the city. This is precisely what Windmill promises to do. “Our site is one of the very few opportunities Ottawa-Gatineau has to get reacquainted with our waterfront, and to have an urban and vibrant waterfront,” he says. 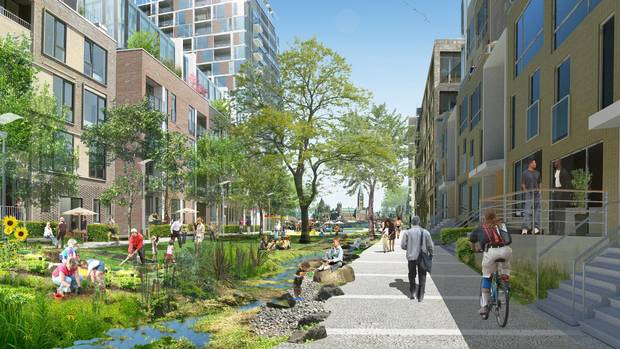 From a regional planning perspective, it makes good sense. Ottawa and the LCC are now studying redevelopment options for the adjacent Lebreton Flats. What is now a dead zone at the heart of the region could become genuinely urban.

But First Nations opponents of the project say that an urban waterfront is the last thing this place deserves.

“The falls are like our Mecca or our Jerusalem, or St. Peter’s Square,” says Douglas Cardinal, the architect of the Canadian Museum of History and one of several people to challenge the project’s zoning. “For 10,000 years, people have come there for spiritual ceremonies, and it was only taken over by force. Now, we don’t do things that way. We are supposed to treat each other with respect.

“Would they build condos on St. Peter’s Square? No. But here, it’s a bunch of Indians.”

Cardinal, an Ottawa resident who has Blackfoot and Métis ancestry, has long supported the vision of the late Algonquin Chief William Commanda for an indigenous cultural centre on the islands. But the Harper government opened the door to Windmill’s purchase of the Domtar site; the National Capital Commission is still considering what to do with nearby Victoria Island, which it owns.

Cardinal launched one of four appeals of Zibi’s zoning to the Ontario Municipal Board (OMB) – the body that oversees municipal decisions in Ontario. In November, the board dismissed those appeals and ground was broken for Zibi in December. Cardinal has appealed that OMB decision to the Ontario Superior Court of Justice, which will hear the case in February.

Cardinal is joined in his opposition to the project by some, although not all, Anishanabe elders and nations, including the Assembly of First Nations Quebec-Labrador. The site is unceded Algonquin territory, part of a 36,000-square-kilometre area including the entire National Capital Region. Windmill has the support of the Algonquins of Ontario, the coalition that is negotiating the land claims treaty.

The developers have, meanwhile, worked to include Anishanabe people in the creation of the development and in its final state. Windmill has an alliance with the Algonquins of Ontario; it is committing to employ aboriginal tradespeople in the construction of the area and to include an aboriginal presence on the site, including public art and potentially a cultural centre. The developers have committed to posting major street signs in English, French and Algonquin. Is that cynical tokenism? Cardinal believes it is.

But it is also more than the developers were required to do, and assuming the neighbourhood goes ahead, it will have lasting effects. It would be wrong to underestimate the power of such symbolism. I spoke this week with Josee Bourgeois, one of several First Nations women working to advise Windmill on the cultural significance of the site. Bourgeois is from the Pikwakanagan reserve outside Ottawa, but grew up in Toronto.

“I know for a fact I needed to see something like Zibi – in my young adult life – to understand who I was. That is a starting point, but it’s way overdue.”