The Grenfell Tower fire in London last week was an unprecedented disaster: A newly refurbished apartment tower turned into a death trap.

Now one prominent architect is asking how Canada – which has thousands of towers similar to the one that burned in London, and that need work – can make sure such a fire never happens here?

"This requires a careful review of building codes, of approved materials," said Graeme Stewart of ERA Architects, a specialist in the renewal of modern apartment towers. "After this incident, we all have to be extra diligent about how we approach retrofits."

In the coming decades, the retrofitting of apartment towers, usually through the sort of "overcladding" that took place at Grenfell, will affect the lives and the safety of more than a million Canadians. The country's cities have thousands of aging high-rise apartment buildings, the bulk of them built between 1950 and 1980. There is a growing effort to refit these buildings to achieve better energy-efficiency and more comfort for the residents.

Among specialists in this area, "the question of fire safety came out of left field," Stewart explains.

On Friday in Toronto, Mayor John Tory met with the city's fire chief and asked him to review the city's emergency procedures; news outlets reported that the city's fire service is reviewing its response plan and the way it deploys resources to high-rise buildings.

For architects, engineers, and construction professionals, Stewart argues, it is equally time to rethink their approach to fire safety while refitting towers.  "We assume that building codes have locked this down," he said. Now there needs to be a careful look at how we build."

Investigations into the causes of the London fire – which spread rapidly through the 24-storey tower, killing at least 79 people – have found a faulty freezer is to blame. The cladding system, which was applied to the outside of the tower during a renovation between 2014 and 2016, is charged with allowing the fire to spread. Tests on 600 British buildings have, so far, found six buildings with flammable cladding.

Stewart's concern relates to Canadian towers, which are owned largely by private landlords. Grenfell Tower was built in 1974, with structure and exterior walls of concrete; there are many Canadian buildings of a similar vintage that are constructed with similar techniques. The "overcladding" of such structures to repair façade systems that are failing has already begun, and it will be a common practice in the next 20 years.

In this context, Stewart argues, a careful re-examination of materials and building techniques is important. "We'd strongly encourage the Canadian Standards Association to look at what it classes as 'non-combustible' materials," Stewart argues. "Are our [building] codes up to snuff? There needs to be due diligence to make sure they are in good shape."

The specific genre of façade panels used at Grenfell, which combine aluminum with a combustible foam insulation, is permitted in at least some Canadian jurisdictions; however, they would only be permitted on low-rise buildings. "The Ontario Building Code does not permit this type of cladding on buildings over six storeys in height," said a spokesperson for Ontario's Ministry of Municipal Affairs. "In addition, it's not permitted on buildings over three storeys if the building is not equipped with automatic sprinkler protection."

The type of material typically used for "overcladding" towers in Canada is EIFS, which combines polystyrene foam and stucco. Properly used, it provides fire safety, but its foam component can be combustible. According to Ted Kesik, a professor of building science at the University of Toronto, the Canadian use of such materials offers no cause for alarm. Where the cladding at Grenfell was installed with an airspace behind it, allowing the fire to be ventilated and spread, in Canada such components "are all fully adhered or mechanically fastened with no airspace," he said. "Evidence from real fires does not support banning these materials as they are deployed in Canadian practice."

However, Kesik added, there are now a large number of commercial products for wrapping buildings, and these should be examined carefully. "The wave of innovation in cladding materials and systems does justify a review of our current codes and standards to ensure they are an effective public safety net that can catch any potential risks."

Stewart, who also works with the non-profit Centre for Urban Growth and Renewal, is one of Canada's leading authorities on this type of project. He and colleague Ya'el Santopinto were in England when the Grenfell fire broke out, speaking about their work.

"Tower Renewal," as it is called, takes a broad approach to the construction, zoning and planning of tower sites and tower neighbourhoods, which supply a large portion of Canada's purpose-built rental housing.

The effort began in Toronto a decade ago and will be the subject of an international symposium in October in partnership with the United Way and other organizations. The best examples for such projects, Stewart says, are typically in Germany and in Britain. "It's in its infancy in Canada," he says. "As this work is just beginning, how do we make sure that nothing like [Grenfell] can ever happen?

In short, by making sure that building components, engineering and the inspection of building sites do not allow for loopholes.

Now, the need for such diligence is very clear. This week, Stewart was touring Windrush Tower, a publicly owned tower block in Oxford, England, which has recently been – safely – reclad and to which fire sprinklers have been added. "We met one tenant, who told us she's been annoyed to see these ugly sprinkler heads installed on her living room ceiling," Stewart said. "And now, she said, she gets it. Everyone understands the gravity of this now, and I hope that will continue." 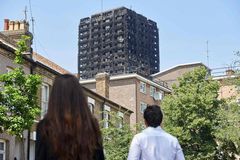 Presumed death toll in London fire rises to 79
June 19, 2017
Follow Alex Bozikovic on Twitter @alexbozikovic
Report an error Editorial code of conduct
Due to technical reasons, we have temporarily removed commenting from our articles. We hope to have this fixed soon. Thank you for your patience. If you are looking to give feedback on our new site, please send it along to feedback@globeandmail.com. If you want to write a letter to the editor, please forward to letters@globeandmail.com.
Comments