Among people who think and care about Toronto – or at least those who (like me) scribble away on the Web and in the daily press – this week's hottest topic has been the proposed demolition of some elderly King Street industrial buildings (and a relatively new theatre) by impresario David Mirvish, and their replacement by three very tall condominium towers designed by Frank Gehry. At stake, according to some commentators, is the very future of the inner city. Is Toronto's downtown core doomed to lose every trace of its traditional mid-rise, industrial-era character? Is every downtown street destined to be crowded and shadowed by huge stacks of condos?

One could be forgiven for thinking that such questions had been settled, at least in principle, a long time ago. It's been some 60 years, after all, since our post-war political, cultural and economic elite decided that Toronto should turn from a big colonial town into a full-dress North American metropolis. Some early results of this proposed transformation in urban attitude were the razing of an entire neighbourhood to make way for Viljo Revell's new City Hall and the levelling of a downtown block to carve out territory for the Toronto Dominion Centre, Ludwig Mies van der Rohe's magnificent ensemble of buildings and spaces.

Public enthusiasm for such mega-projects, such as it was, waned after the TD Centre went up. But the idea of the city centre as a high-density residential, commercial and cultural powerhouse never died, and in fact has revived and thrived since the onset of the current real-estate boom. David Mirvish's scheme is only the biggest and most ambitious architectural manifestation of this idea to come along in the last 20 years. While critics are correct when they point out the unusual height of the towers, and the rambunctiously anti-traditional styling of Mr. Gehry's architecture, they should remember that this proposal has come forward, not out of the blue, but from the significant history of Toronto's long-term modernizing (and Americanizing) of itself.

Following this course is not inevitable, of course. We can always change our minds – but we likely won't. In one of the most thoughtful responses to Mr. Mirvish's project I've seen – it ran in The Globe and Mail earlier this week – planner and urbanist Ken Greenberg observed that, "like it or not, Toronto is becoming a different city. It's now clear that it's transitioning to a city with a vastly different level of intensity. There's an echo of Manhattan in the mid-20th century, when wave after wave of building radically altered the form of New York and produced the kind of hyper-dense, hyper-animated environment that makes that city unique."

That said, Mr. Greenberg is swift to note certain differences between mid-century Manhattan and us – differences we should think about carefully before cheering for Mr. Mirvish's proposal. For one thing, New York had an excellent, dense transportation infrastructure to support the new population density, and we don't. "We have failed to make the investments in public transit that are urgently needed. Our narrow sidewalks and poorly designed streets are already jammed. We will need to invest in public services to accommodate the major increases in population. Our public spaces are meagre and poorly equipped and maintained."

But as important as urban hardware surely is, the thoughtful, orderly roll-out of intensification is absolutely necessary. Where should the new tall buildings go? "Clearly not everywhere and not indiscriminately," Mr. Greenberg wrote. "Yet, Toronto's planning regime seems to lack the ability to make distinctions. One tower leads to another. No one wants to see this phenomenon marching up and down all the nearby streets in the neighbourhoods surrounding downtown. What about the heritage legacy? What is the city going to protect? Can it protect areas where this isn't appropriate and direct this growth to the right places?"

City Hall's answers to these questions will be forthcoming, one can hope, when the massive King Street proposal starts to wind its way through the public approvals process. But we shouldn't have to wait so long before hearing much more about Mr. Mirvish's reasons for believing that Toronto's public good will be served by the knock-down of a perfectly good theatre and a number of solid buildings, the radical rezoning of his property to allow the skyscraper height he's after, and the construction of three super-tall condo structures at exactly this place in the urban fabric.

Torontonians, it seems, are supposed to be so impressed by the Gehry brand, and by the prospect of having the world's most famous architect do something new and big in our town, that we won't demand hard answers to these and other questions raised by this project. I, for one, am certainly excited by both the brand and the prospect. We might even be on the verge of getting another large, late-career masterpiece on the order of Mies's TD Centre. But if all works out as it could, and as Ken Greenberg and other knowledgeable observers think it should, Mr. Gehry's towers will not be built without a trial by fire, or without a vigorous, fresh, irreverent public debate about Toronto's metropolitan future.

A Toronto home that explores the new geometry of a glass box
September 20, 2012 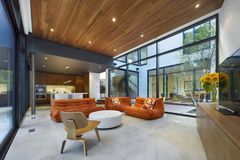 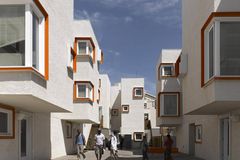 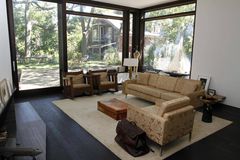