On an unsuspecting part of West 21st Avenue, a few blocks from Vancouver's Endowment Lands, Western Canada's first LEED Platinum-certified house basks in the spring sunshine. But the custom-built green home, designed by Frits de Vries for Natural Balance Home Builders founder Nick Kerchum, radiates an understated beauty. It's clean modernist lines distinguish it from surrounding arts-and-crafts style homes with their pitched roofs and gables, and yet with its perfectly proportioned massing and scale, it feels right at home in the Dunbar neighbourhood.

The house has won multiple awards including the Royal Architectural Institute of Canada (RAIC), Award of Excellence, Green Building, Honourable Mention; it was the 2010 National SAM Award winner, Green Home Category (Awarded by the Canadian Home Builder's Association) and the 2010 Georgie Award Finalist in three categories (nominated by the Canadian Home Builder's Association of British Columbia).

But for the 32-year-old Kerchum, it functions as a home office, a show home for his company, as well as the first residence for his young family. It's also a model for many young people like Mr. Kerchum, who grew up in the neighbourhood, and want to come home again, not to fusty 80-year-old houses full of nooks and crannies, but to open, modern spaces.

"It's a funny thing," muses Mr. de Vries, who emigrated from Holland several decades ago to marry a Canadian, "that in Vancouver people are accustomed to modernist design downtown, but when they come home, their expectation is for traditional arts and crafts style homes."

But what Mr. de Vries and Mr. Kerchum have created here is a beautifully crafted home whose open, flexible and streamlined spaces are well suited to the modern family. "Some people think that building green means giving up on style and design, and living in a box" says Mr. Kerchum, who became a builder after studying international relations at UBC and marrying a fellow student from Uzbekistan. "But our whole approach is about harmony between form and function. In the end, its about experiencing the space."

The house is inviting as you approach the entrance, the slightly graded site offering a welcoming path inside and introducing the subtle interplay of textures and levels that permeates the design. The front façade is a mix of reclaimed granite from an old Thirties-era downtown bank, stained cedar soffits that allow light in during the winter and provide shade in the summer, stucco, and aluminum-clad wood framed glazing. Solar hot water heating tubes peek out from an upper-floor balcony, and everything is oriented and designed for passive solar usage. Everywhere landscaping (irrigated by collected rainwater and designed by Claire Kennedy) blends native, drought resistant plants and long grasses with pine and Japanese maple trees that offer shading and privacy to the triple glazed high performance windows.

The first floor is dominated by a large living/dining area, offset by a front room that could function as a home office space or guest room.

The indoor/outdoor aesthetic is key here as north-facing, 12-foot glazing brings in views of the backyard, garden and mountains, while south-facing windows bring in light. To achieve the seamless effect - a blending of indoor and outdoor space and materials like walnut flooring morphing into heat absorbing basalt tiles - was no mean feat, explains Mr. De Vries. "Designing modern spaces means that everything has to be perfectly aligned - if not mistakes are more glaring than in a more traditional design where you can hide them with ornament or mouldings," he says.

But the overall effect is one of intimacy. "Having one big space, rather than separate rooms or alcoves" Mr. Kerchum says, "means the family comes together more. "And flexibility is key - especially since the original plans did not anticipate the birth of Kerchum's one-year-old daughter. Yet her large playpen filled with stuffed animals now delineates the dining and living areas quite naturally.

Some safety features - like glazing in the open light filled floating stairwells leading to the upper levels - were necessary, of course. And an upstairs room overlooking the backyard - originally envisioned as an Uzbek-style room full of floor cushions - was quickly converted to a changing table/nap area. Otherwise, the open spaces and flat surfaces, not to mention the natural non-toxic materials, make this the perfect baby-makes-three abode.

Mr. De Vries' clever interplay of levels - the west side of the house has three floors while the east side has four - creates a dynamic sense of movement. It also allows for a stunning roof deck on the west side, that takes in views of the surrounding forest and a more distant one of the city. Throughout, he juxtaposes open and airy spaces with more private areas, connected by the central stairwell.

A basement with a separate entrance - which could eventually become a tenanted apartment since neighbourhood bylaws have recently changed - now functions as the HQ of Natural Balance. It feels much bigger than its 800 square feet, partly because a south-facing, deep-set patio brings in light and absorbs heat with a Mediterranean flair.

But it's the north-facing elevation that really brings it all together. Here, a zigzagging effect is created by the split levels, framed by the interplay of steel and stucco and given textural body by three roof gardens. Although the house is grounded in the local by West Coast elements like cedar and indigenous greenery, it has the feel of an international modernist villa, whose flexible spaces could work in many different environments.

"What we're trying to do here," says Mr. Kerchum, who is working on a number of projects with Mr. de Vries, "is lead by example." The two anticipated that bylaws would change on secondary suites, for instance, when building the basement, and the roof gardens, only recently allowed by city planners, required careful negotiation.

"We're trying to be on the cutting edge," explains Mr. Kerchum. And in design conservative yet naturally beautiful Dunbar, the two have done an impeccable job of creating a residence that is both ingeniously green and surprisingly stylish. 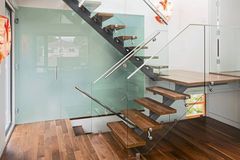 An exercise in forms and space
December 3, 2010 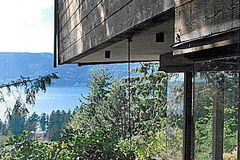