At the corner of Villeneuve and Hôtel-de-Ville in the Mile End, a brand new white-varnished-brick building cantilevers over a traditional, restored red clay brick building. Together, the buildings comprise a new eight-unit housing project, the Hôtel-de-Ville Residence, designed by Montreal’s ACDF Architecture specifically to appeal to families.

The residence, located in a central and popular Montreal neighbourhood, is surrounded by an eclectic mix of other buildings: a car repair garage with a corrugated metal fence; high-end duplex and triplex conversions; a painted-brick housing co-op; and the concrete-wrapped Conservatoire de musique et d’art dramatique de Québec. 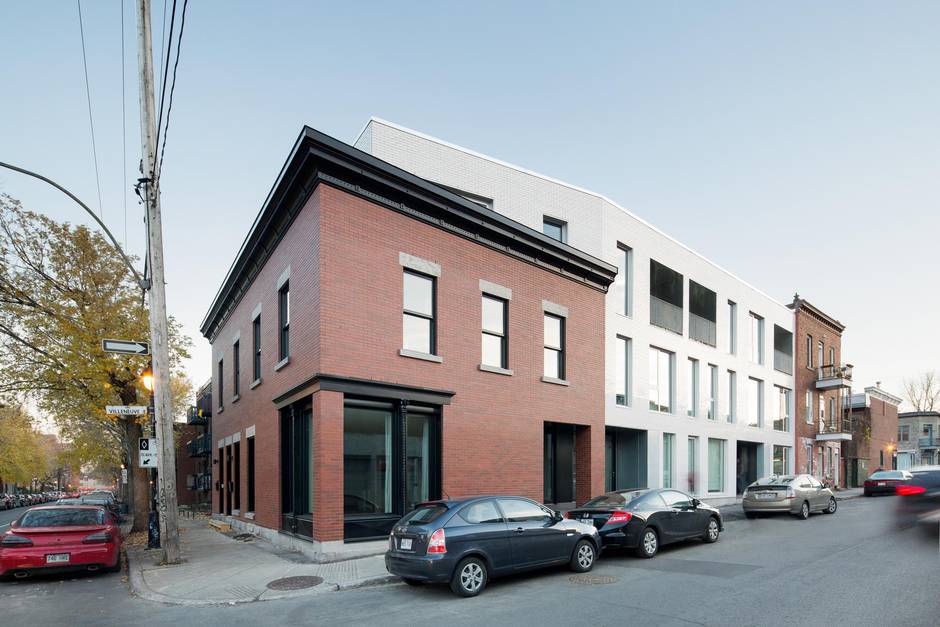 The white-clad Hôtel-de-Ville Residence has a car-repair garage, other housing developments and a concrete-wrapped music and art conservatory for neighbours. (Adrien Williams)

“Normally, the reflex of the architect and the city would be, well, let’s try to integrate ourselves as best as we can, and keep the same type of architecture and bricks,” ACDF architect Maxime-Alexis Frappier says. “But that’s not how Plateau-Mont Royal is designed and built. It’s all different. So for us it was important to keep that notion of being eclectic, bringing in another material, but not being complex as well.”

Mr. Frappier says that the glossy, white-varnished brick was used as a building material quite often in the fifties and sixties in Montreal. Its use for this project recalls the city’s architectural history, and also forefronts the importance of quality material. “When you walk, you get the reflection of the light, changing as you move down the street,” he says.

Nik Luka, an architecture and urban planning professor at McGill University, says that the Hôtel-de-Ville project is remarkable for two reasons. “As an architecture project, it really is exciting in terms of how it plays with the morphology of the block. It’s adding more architectural space to the city without creating a burden, without transforming the basic visual landscape.”

Second, he says that the project provides a good example of how to create living space for families in urban settings. “It’s got a range of different unit types and they’re spread across different floors,” he says, “so you know they’re paying attention to separation of day and night spaces, so noisy and quiet spaces, within the units and from one unit from the next.” 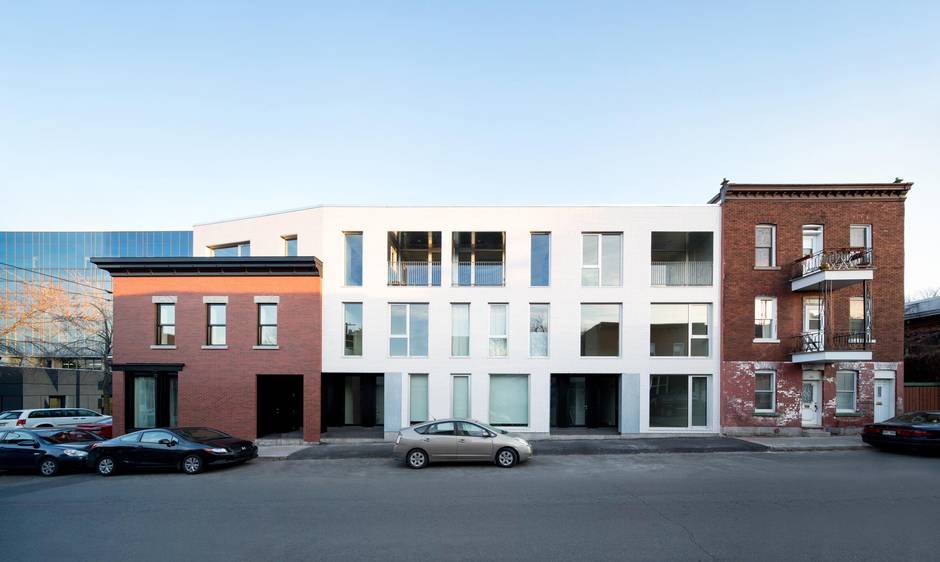 Urban planning professor Nik Luka says"it really is exciting in terms of how [the Hotel-de-Ville Residence] plays with the morphology of the block." (Adrien Williams)

Staying in the city – or returning to it – to raise a family is a growing trend in Canada. Dr. Luka studies the phenomenon, called “reurbanization;” he says that the trend has been clear since the 1970s, and “really dramatic” since the early 1990s in most cities, especially Montreal, Toronto and Vancouver.

“It’s now considered kind of gauche to live in the suburbs,” Dr. Luka says. “Suburbs become more and more part of a stereotype of boringness or middle-age surrender of any kind of idealism.”

Mr. Frappier agrees. As we stand on the corner talking, a group of young children wearing matching vests and holding onto a long string are guided down the street by three daycare workers. Mr. Frappier points to a swing hanging from the ceiling of one of Hôtel-de-Ville’s units. “More and more, parents want to live here,” he says. “It’s a cool, heterogenous neighbourhood. People want to live in the city.” 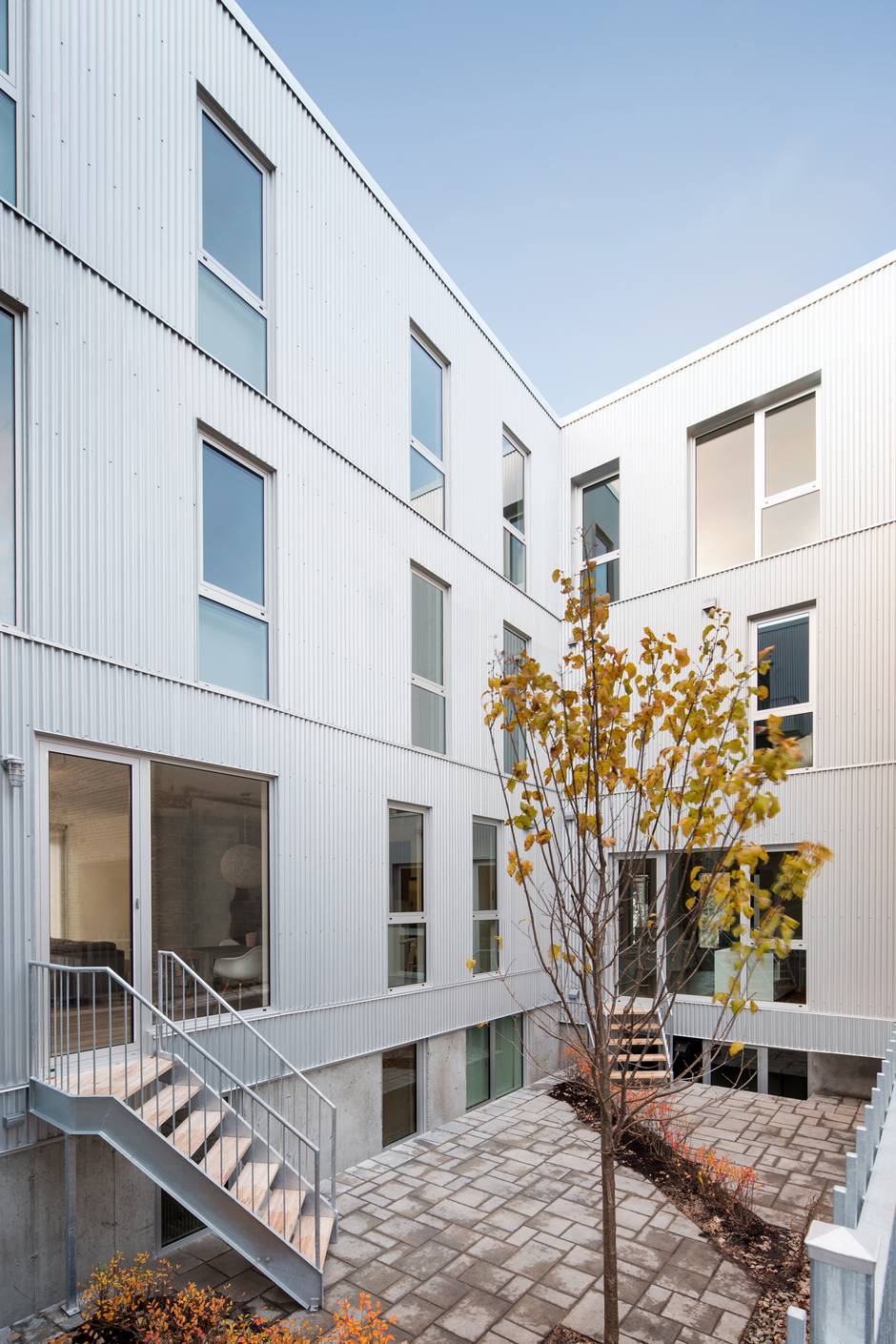 The Hôtel-de-Ville project incorporates several different elements and approaches to appeal to families, including good transversal ventilation, courtyard space and multilevel units. As well, each unit has a separate entrance, which Mr. Frappier says affords privacy. “You want to bring your kid to go to a swimming pool at 7:30 on a Saturday and not wake up the neighbours,” he says.

Raphael Fischler, director of McGill’s School of Urban Planning, points out that private entrances are a Montreal tradition. “That’s why we have these triplexes and duplexes. We do not go into a triplex through a common apartment doorway with a common staircase. The bottom unit has its own front door, and the second and third floor units have their own front door also with their own, often external, staircases.” 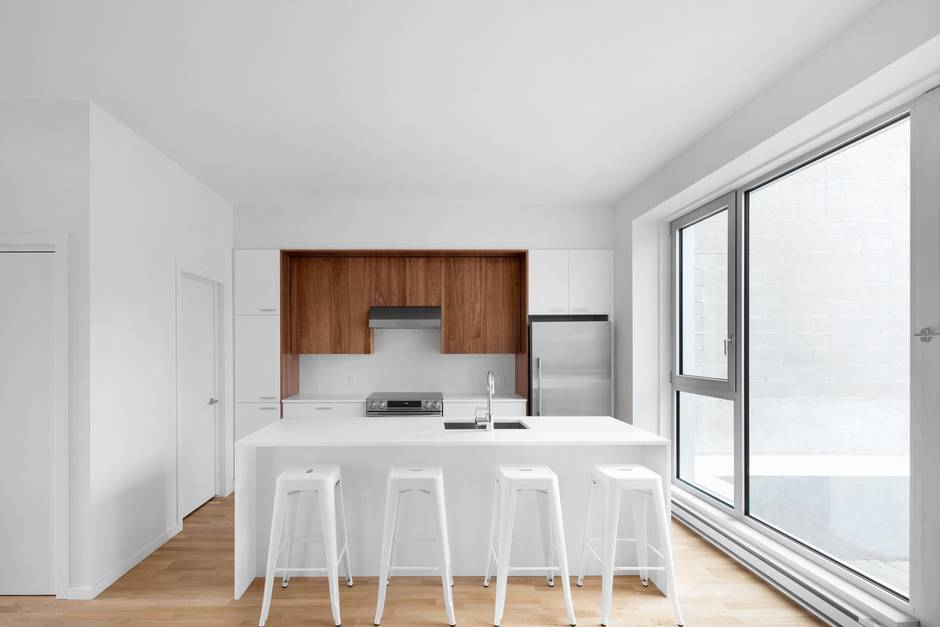 Mr. Frappier says the cultural vibrancy of the Mile End makes up for the tighter space. (Adrien Williams)

Mr. Frappier says that Hôtel-de-Ville’s units are smaller, as far as square footage goes, than what an equivalent amount of money would fetch in a less-central neighbourhood, the cultural vibrancy of the Mile End makes up for the tighter space. “The strategy for living in Montreal is the ‘plus one’ strategy,” he says. “So if you live in a two-bedroom, you live in a two-bedroom plus one. What’s the plus one? The plus one now is Café [Olimpico] on Saint-Viateur, it’s the urban piano on the street.”

The project is interesting not only for what it includes, but what it lacks. While there’s a bike storage room, there’s no on-site parking. This is another sign that urban living styles – with their focus on biking, walking, and public transit – are becoming part of the habitus of the upper-middle-class. 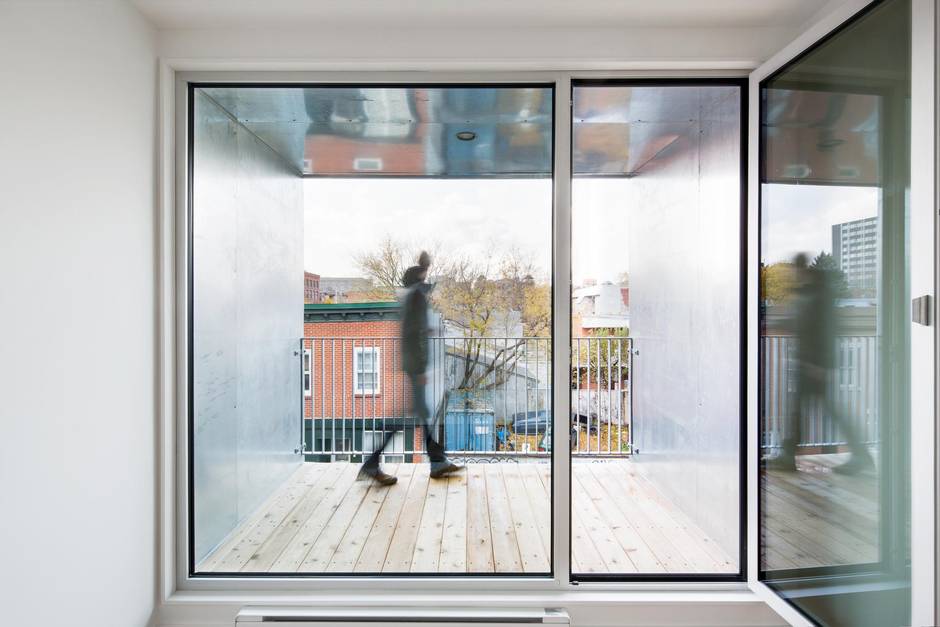 Dr. Luka cautions that while the project can be celebrated for its architectural and family design achievements, it shouldn’t be viewed as a pilot project. (Adrien Williams)

Dr. Luka cautions that while the project can be celebrated for its architectural and family design achievements, it shouldn’t be viewed as a pilot project. “It’s not a precedent setter in terms of demonstrating that family-friendly housing is possible in the run-of-the-mill setting,” he says, “because the Mile End has become sort of the cream-filled doughnut of Montreal, a gentrified core neighbourhood that has become almost impossible to get into.”

“It’s nice when you don’t have to have two cars as a household with children, or you can get by without a car,” Dr. Luka says. “But it’s becoming a luxury. One of the challenges with creating this kind of housing is, how do we scale up?”