If the planning mandarins at city hall get their way, and if Mayor Rob Ford doesn't wreck the house in the meantime, Toronto will be ready for the 600,000 new people expected to arrive here during the next couple of decades.

Developers will help make room for this welcome influx – such is the dream, in any case – by putting up mid-rise residential blocks along arterial streets throughout the city. They will also construct tall stacks of condominiums at important intersections, on the biggest thoroughfares (especially in the core) and near key transportation nodes, such as subway stations.

Heavy public-sector investment in an increasingly effective, sophisticated regional transit network will support the intensification. Main streets that are currently run-down will be rejuvenated and the gobbling down of Ontario farmland by suburban sprawl will be halted.

And, before you ask, I should say that, no, Hogtown's streets will not be paved with gold. In fact, unless there's a sharp upswing in public-spirited hospitality in this city, none of the good things in the official plan for our urban future may come to pass. Nor do Torontonians seem convinced that, if the changes proposed for our avenues come about, we will really like the resulting mix of low-rise houses, European-scaled mid-rises and glassy North American towers.

For my own part, and despite some reservations about the details, I haven't seen a comprehensive revitalization scheme that looks better than the one that's percolating at city hall these days. But don't take my word for it. In just a few years from now, we will all be able to see a sample of what a lot more of Toronto could be like in, say, 2040.

The place I have in mind is the long stretch of St. Clair Avenue West between Bathurst Street and Keele Street. Sparkling in some spots – there are wonderful Italian restaurants and ice-cream parlours west of Dufferin Street – but mostly dowdy and tired, this zone has been targeted by the city for the kind of regeneration described above.

At the eastern limit of the designated area, where St. Clair crosses Bathurst on its way to Yonge Street, the official plan has foreseen a cluster of high-rises. This feature, perched on the high shoreline of ancient Lake Iroquois and overlooking Toronto's downtown towers, was intended, it appears, to mark the significant intersection as the gateway between the upscale Forest Hill neighbourhood to the east, and the redevelopment region lying along St. Clair Avenue to the west.

Something monumental and special was called for – a tight group of distinguished tall buildings that embodied the new vitality and urban energy about to surge westward along St. Clair toward Keele Street.

If creating such a place was indeed the objective of the plan, the gesture has so far fizzled badly. The mixed-use tower that recently opened on the northwest corner of the intersection, a joint project by the Goldman Group and Lash Developments, is a hulking architectural bore; and its sister-tower, developed by the same business partnership and now under construction next door, promises to be no better.

There may yet be an interesting landmark at this important crossing, however, if the newly-launched Rise condominium building, on the southeast corner, lives up to its renderings.

Designed by Toronto architect Enzo Corazza, founding partner in the firm of Graziani + Corazza, for Reserve Properties Ltd., this 25-storey structure is, in most respects, much like any other new condo building in central Toronto. It has the usual amenities. The prices (around $550 a foot) and suite-sizes are reasonable in this market. And the project is pitched to the buyer every developer hankers after nowadays: Either young or retired, kid-free in any case, affluent and urbane. The block will not attract families into the condo lifestyle.

But Rise does have one element that sets it apart from the usual run of new condominium towers. It's a kind of architectural exclamation point. To make an unmistakable statement about his structure's situation at St. Clair and Bathurst, Mr. Corazza has sculpted the tower's most conspicuous corner into a bold, syncopated abstract composition in black and white that soars straight up from grade to the summit.

The skeptic in me would like to write off this dramatic move as just a marketing ploy – and, were the building anywhere else, I would probably do just that. Here, however, this corner treatment works. It will likely make the building stand out very boldly, exactly as it should. As the makers of the new St. Clair Avenue west of Bathurst redo the streetscape in preparation for some of those 600,000 newcomers, they will soon be able to look east and get an attractive jolt of visual electricity from what Mr. Corazza has done. 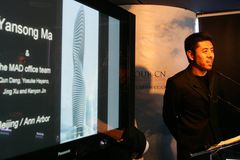 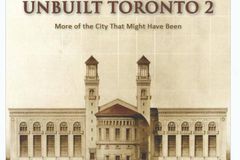 It's not easy going green, but it can spark creativity
December 22, 2011 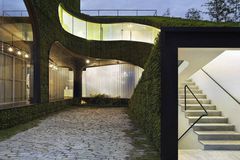