Can you build a community with a box of books?

In Newmarket, Ont., the answer is yes. But the box is a special one – a wooden pavilion, lined with rich mahogany and stacked with volumes brought in by people of the town. Just eight by eight feet, the Story Pod, as it's called, is a takeoff on the free book exchanges known as Little Free Libraries that are popping up on front lawns across North America. This idea has been given an elegant architectural expression by Toronto architects Atelier Kastelic Buffey (AKB). But the modest, modern little building reflects a larger vision: to draw people to the park in which it sits, to the nearby Holland River, and to the town's original downtown. It is to create a centre.

"For years, a lot of people here were busy commuting and on the weekend there was no place to gather," says Newmarket's Mayor Tony Van Bynen. The park, called Riverwalk Commons, opened in 2011. "This gave them a place," Van Bynen says, "to come together and meet their neighbours."

For decades, the main spot to find your neighbours in Newmarket was at the mall. This town of about 86,000, just 50 kilometres from Toronto, saw the same pattern of car-oriented growth that gutted many of Canada's Victorian streetscapes. Upper Canada Mall, which opened in 1974, prospered; the dense, handsome Main Street, which dates back to the 1850s, was full of vacant stores. Now, the town's leadership sees a need for change, trying to create public spaces where citizens – both millennial parents and youthful retired boomers – will want to hang out together.

This is where the books come in, together with some new thoughtful urban design, landscape architecture and architecture. The town's effort is still a work in progress, but it is a textbook example of how to create a centre and a sense of place, the task that so many Canadian towns and cities are trying to confront.

Back in 2001, Newmarket commissioned a strategy to revitalize its Main Street, which is a well-preserved row of Victorian shops and apartments. What did it need? A survey found that locals wanted to see more and better restaurants and cafés, and also a place that was simply more attractive.

Accordingly, the town decided to turn an eight-acre site next to Main Street, including a parking lot and an arena, into a new park – and they hired Toronto's Janet Rosenberg and Associates, one of Canada's leading landscape architecture firms, to design it. "The town had no hub," principal Janet Rosenberg says. "The river was, historically, at the heart of the place, and there was so much potential to make something special out of it."

Despite some skepticism from the public about the vision – "at the public meetings, some people said the best thing about Newmarket was that it's always easy to find parking," Rosenberg recalls – the project moved ahead. Called Riverwalk Commons, it is a beautiful place and well-used. There is a handsome square built around a wading pool and skating rink; an outdoor stage for events; new riverside walking paths, terraces and seating that link the site to a 10.6-kilometre walking trail that spans the town and winds up at the commuter-rail station.

None of this came cheap. The new trees are large, and the landscape is built from quality materials – when you sit, it is on benches made of a hardy tropical wood called ipe. To clean up a community centre that sits outdoors, Rosenberg's office brought in the architects Superkul, who added a canopy, more ipe and a handsome new cloak of multicoloured steel siding. "We realize when you build public space, quality is important," Van Bynen says; the park has cost $10.1-million. (The Story Pod was built by staff and materials were bought by a sponsor.)

To keep the place busy, the town programs it actively. A farmers' market takes place here each week; in the warm months, a variety of other public events (a pet fair called Newbarket, a cultural festival called Urban Alley) give people specific reasons to come.

All of this is heavily pedestrian-centric; while there is still plenty of parking, the goal is to get people out of their vehicles and face-to-face. "I think downtown is the heart of a community," Van Bynen says. "This was a parking lot; not a lot of conversations take part in a parking lot, unless you're having a fender-bender."

This all reflects the influence of the planning movement known as placemaking, which is devoted to restoring an active civic life to suburban and urban streets. But while the leading proponent of placemaking, the American non-profit Project for Public Spaces, often argues for a "traditional" architectural language, the Newmarket work is modernist in character. Rosenberg, Superkul and now AKB have each worked with materials, details and forms that are free of historic references.

Many visitors won't notice or care; but the mayor believes that this language sends a subtle message to younger people, whom the town is eager to attract. "We are showing the Newmarket of the future," he says.

The Story Pod, installed in August, is the latest signal of this agenda. It sits in a quiet end of the park as a black box, harmoniously proportioned and precisely detailed, wrapped in a rhythmic screen of wooden slats. Its two hinged wings close up at night, leaving a glowing, translucent window to suggest what's inside; during the day it swings open like a dollhouse to reveal mahogany benches on each side, comfortable places to sit and browse through the titles on offer. The pod, built by town parks staff, speaks of craft and quality.

The architects, AKB, are ambitious and skilled designers who rank among Ontario's best small firms; through a friendship with a town employee, AKB's Aaron Finbow learned of the project and easily convinced principals Kelly Buffey and Rob Kastelic that they should do the work pro bono. "We were inspired by the agenda of literacy," Buffey says, "and also we were excited to create a place of exchange – of books and of ideas." People can take the books and sit down by the river, or take them home.

And they do; a town staffer told me that each of the pod's original books had been replaced at least once in the first six weeks. The city's director of parks and recreation, Colin Service, said he often brings his children here for the weekly evening storytime.

"It's amazing," Buffey muses, "that such a small project could have such a broad reach." Sometimes it is exactly the little things that bring people together. 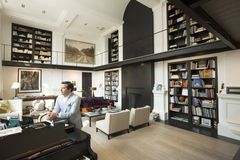 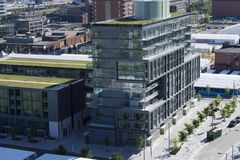