One of the telltale features of a freshly finished, just-built home isn’t the gleaming appliances or unscuffed, piano-gloss floors. It’s the heady, intoxicating, dizzyingly clean smell.

It’s an odour that architect Meg Graham is intimately familiar with, as the principal of Toronto’s Superkul, an award-winning studio that has built many top-quality houses. But in a home she recently completed in Mulmur, Ont. – a beautiful, waterside bungalow with sunbathed interiors and a rich, woodsy palette – “there was no new-home smell,” she says. Not because anything was amiss, but because everything had gone according to plan.

Graham’s goal was to create an abode with no noxious chemicals – the glues, formaldehyde and sealants that hold together, preserve and finish most modern homes. (And that give them that pungent, never-used whiff.) But also compromising indoor air quality, and, with some people, causing irksome reactions like itchy eyes, sore throats and wheezing (a set of symptoms often called Sick Home Syndrome).

It’s a particular concern because, according Health Canada, we spend up to 90 per cent of our time indoors. And yet, according to writer Adria Vasil, author of Ecoholic Home and environmental columnist for Now magazine, “the air in our homes can often be more polluted than the air outside.”

In the past, avoiding harmful building materials was difficult. Paints with VOCs (volatile organic compounds) and cheap, glue-filled chipboard cabinets were standard; the alternatives were hard-to-find, expensive and not particularly attractive. Now, because of increased awareness, and the work of both custom designers like Graham (“this is something that’s long overdue,” she notes), and mass-market retailers like Ikea, a beautiful home can also, increasingly, be a healthy home. 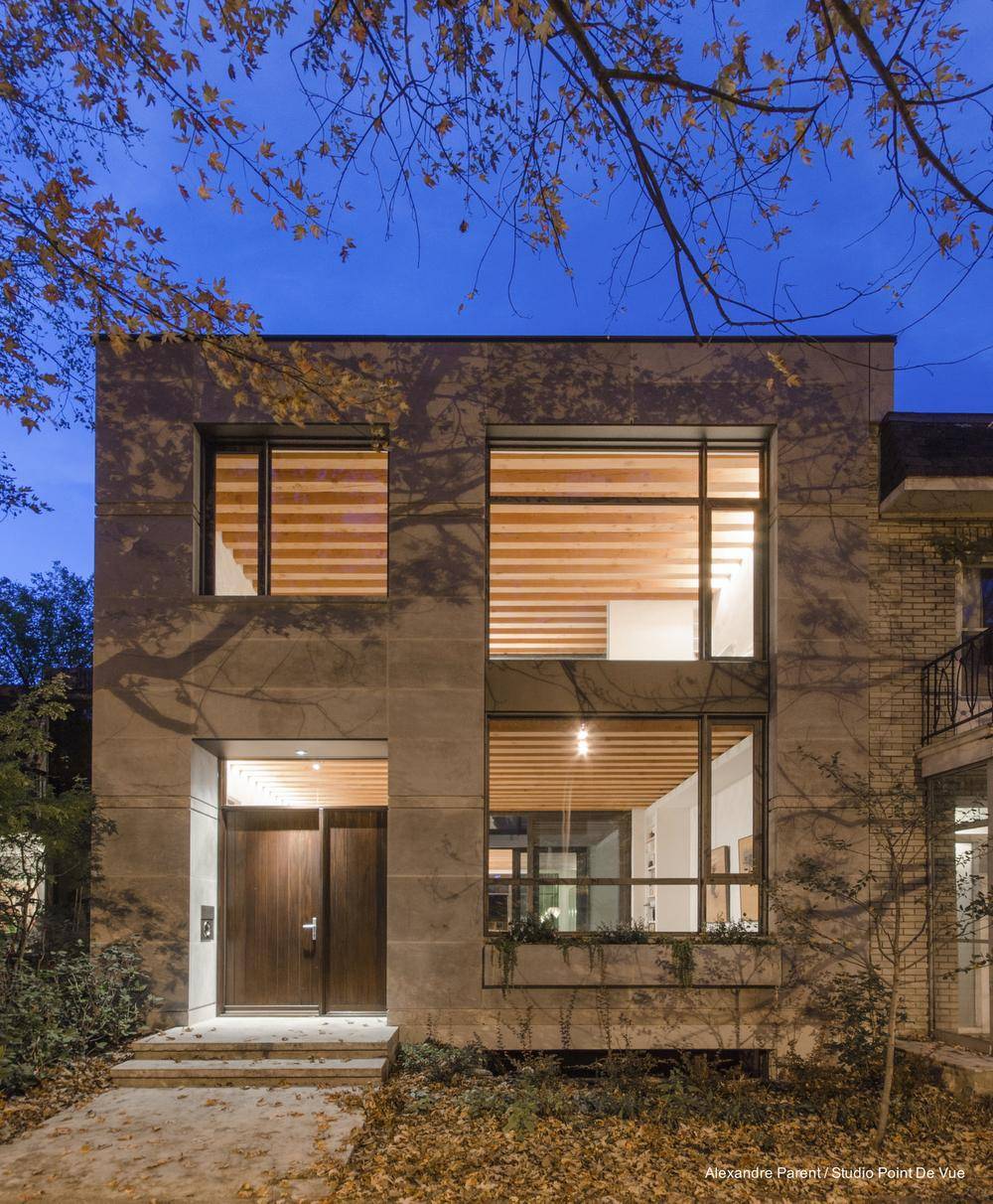 Montreal-based actor Sabine Karsenti lives in one such space with her husband, a contractor and artist who simply goes by the letter F, and their two small children. When she first moved into the three-bedroom, 2,700-square-foot place a year-and-a-half ago, there was “no new-car smell,” she says. And she was thrilled.

Karsenti spent a year and a half working with architect Gervais Fortin and researching materials. Drywall, for example, was out. It’s vulnerable to mould and can leach harmful gasses like sulfur dioxide (a problem specifically when it’s manufactured in China). So were sealants like polyurethane.

Instead, she used as many all-natural components as possible. The locally sourced wood floors are finished in organic oils, for example. And the walls are formed from a composite of hemp, crushed limestone and sand. The results have a striking texture with a soft grey colour so they don’t need to be painted. And they have acoustic properties that help dampen the sound in the house (“it never gets echoe-y in here,” says Karsenti, “even though we don’t have that much furniture.”) 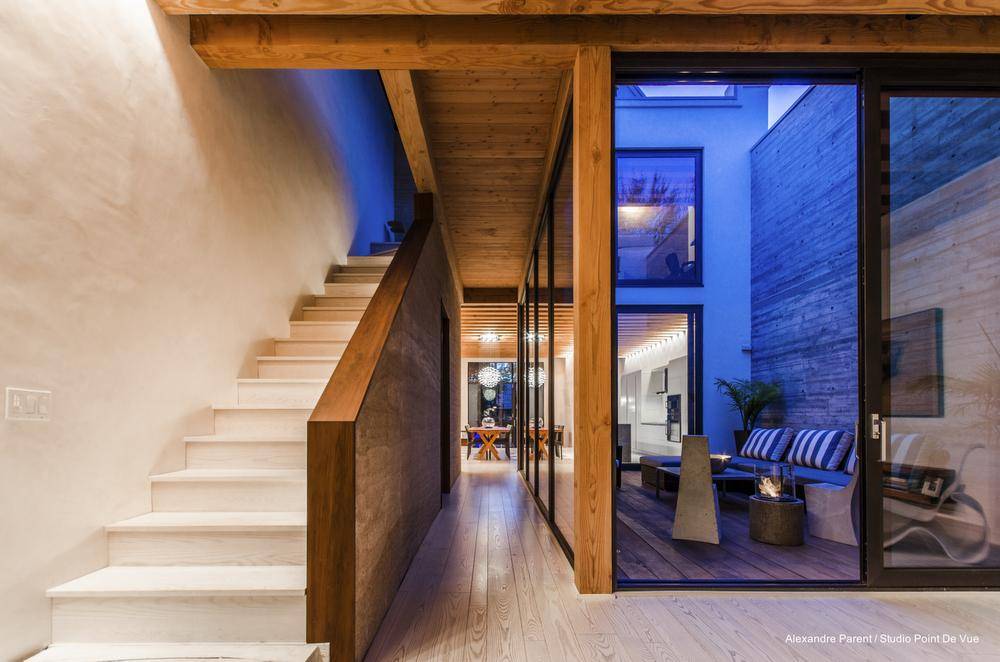 Not every home needs to be rebuilt from the ground up or gut reno’d. Christine Lolley is a LEED-certified architect and principal of Toronto-based, sustainably focused design firm Solares.

She suggests that people be mindful of buying furniture and fabrics that have a lot of glues or chemicals (“it’s an issue with brand-new bedsheets,” she says, “because they are treated to make sure they don’t wrinkle.”), but it isn’t as hard as it used to be (“Ikea makes kitchens that are formaldehyde-free,” she points out). Beyond that, Lolley recommends focusing on insulation and ventilation. “It’s important to seal it tight and ventilate right,” she says.

Having well-insulated, airtight walls is important because when air seeps in from the outside, it can pull in allergens or pollutants. On top of that, having an effective ventilation system in place, like a mechanical heat recovery ventilator, is essential to purifying the air. “It filters out the most pollutant-prone areas like the laundry room, bathroom and kitchen,” explains Lolley, “and brings in fresh air into the living spaces and bedrooms.” It’s like the house is breathing, exhaling the bad and inhaling the good. 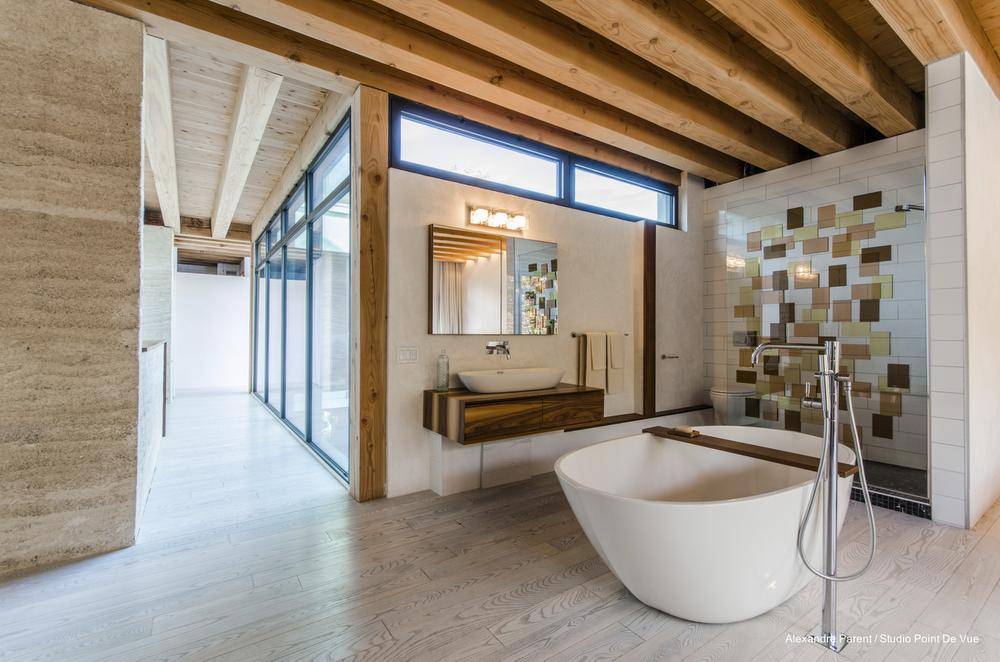 Jennifer Van Evra is a Vancouver-based design writer and columnist for Allergic Living magazine. She agrees that attaining a clean-aired abode doesn’t always mean replacing everything you own (house included) – in fact, sometimes what’s already there is better than any possible alternative.

“A lot of people approach it like new is better,” she says. “They will have a new baby, so they want an all-new everything.” But maybe the existing floor was installed at a time when there were no VOCs, so is that really going to be an issue? Or maybe pulling up the old floor unsettles harmful dust and long-settled toxins?

And although clean materials are becoming more commonplace, Van Evra cautions homeowners not to confuse healthy items with environmentally-friendly ones. Bamboo, for example, is often touted as a sustainable material for floorboards, but it is often treated with pesticides that slowly off-gas into the home.

She also points out that clean and healthy doesn’t, in any way, mean dowdy or dull. “It’s like how people used to think that healthy eating was all brown rice and broccoli,” she says, “and now we know healthy food encompasses many delicious things.” Likewise, a healthy home can be delicious to look at. 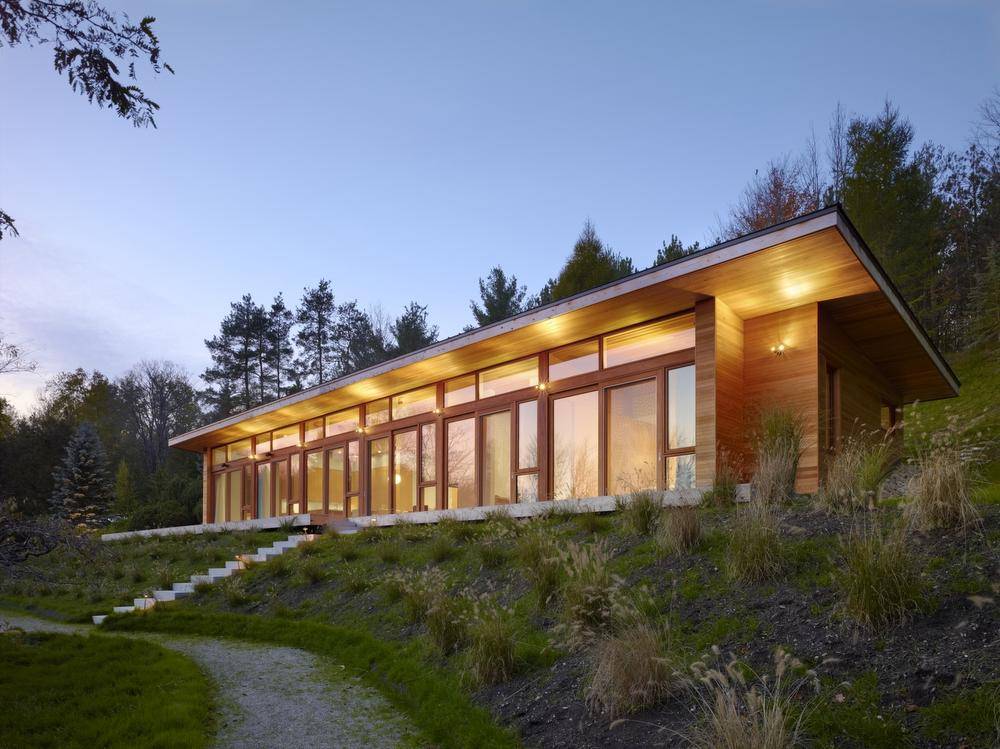 Such is the case with Meg Graham’s space in Mulmur.

The homeowner is sensitive to dust, pollen and a litany of construction materials. Accordingly, all the elements of her new house had to be carefully researched and screened – including a touch test. “We tried over 40 substrates for the floor to find the right one,” says Graham.

But nothing was compromised on the look. In fact, many elements of the architecture are enhanced – not diminished – because they are composed of unique materials. The walls, for example, are plastered in American clay, which has a tactile quality, in addition to being a fungus-fighter and natural room-humidifier. 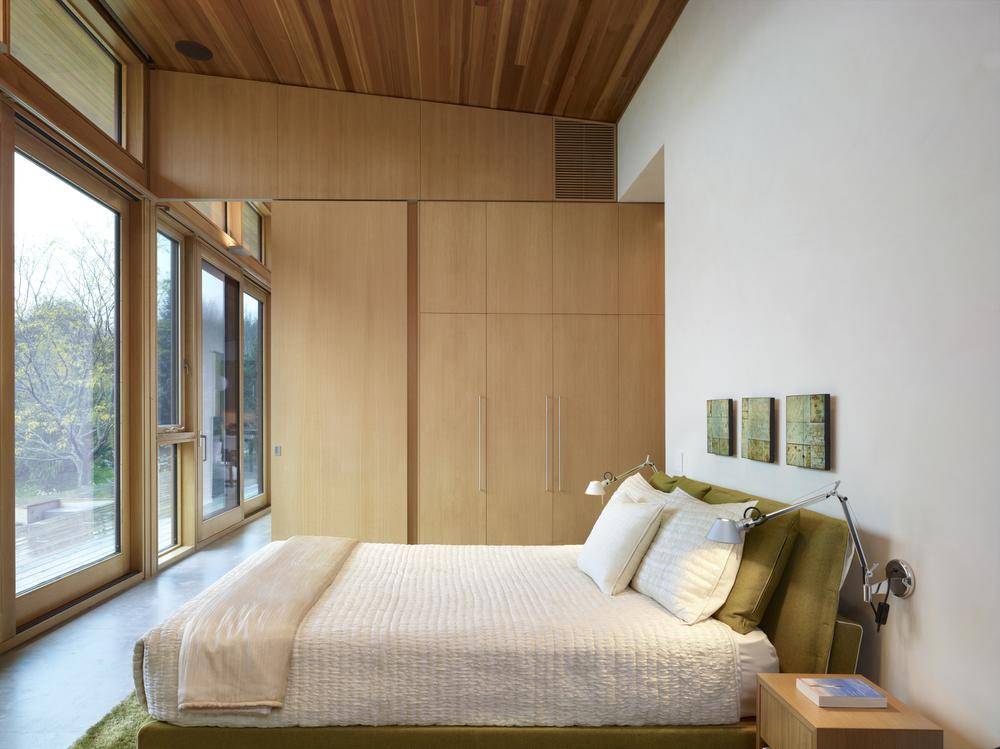 That said, although the architecture is sublime, the stipulations of the project made for a more challenging construction. The contractor had to be extra careful not to bring any VOCs or toxic finishes to the construction site, and the workers were banned from smoking on the job. And because the project reaches a nearly unprecedented level of purity, it wasn’t clear that all the extra measures would be effective for the homeowner.

“When it was finished, we were all on tenterhooks to know whether it all came together,” says Graham. “But when my client walked in, she said ‘it’s amazing, I can breathe really easily.’ ” 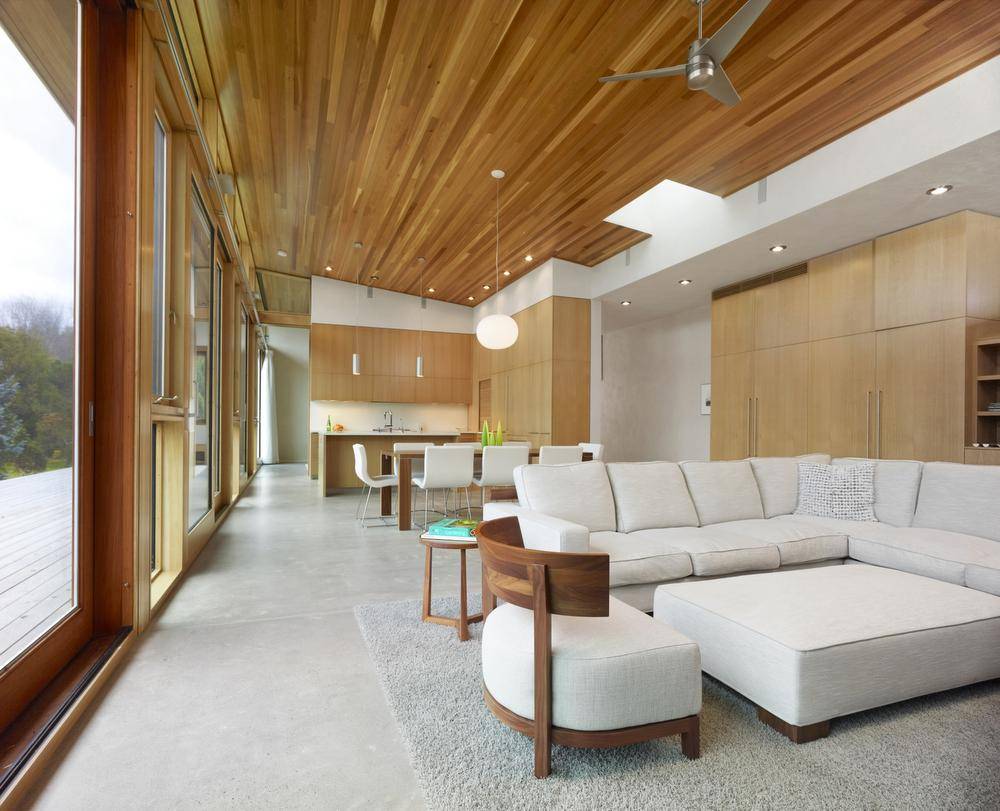