One bright, serene afternoon last week, I sat before the fireplace in a sprightly new dwelling perched atop an old, small apartment complex at 34 Rowanwood Avenue, in Toronto’s Rosedale neighbourhood. Gentle winter sunshine seeped through the suite’s south-facing walls of glass, gilding the interior. The wide view out these glassy expanses and off the spacious terrace beyond them opened over the shingles of large family homes, over the urban forest, toward the towers at the corner of Yonge and Bloor streets. That bustling intersection, which has long been important in Toronto’s imagination of itself, was physically quite close, but felt a hundred miles distant from quiet, stately Rowanwood. 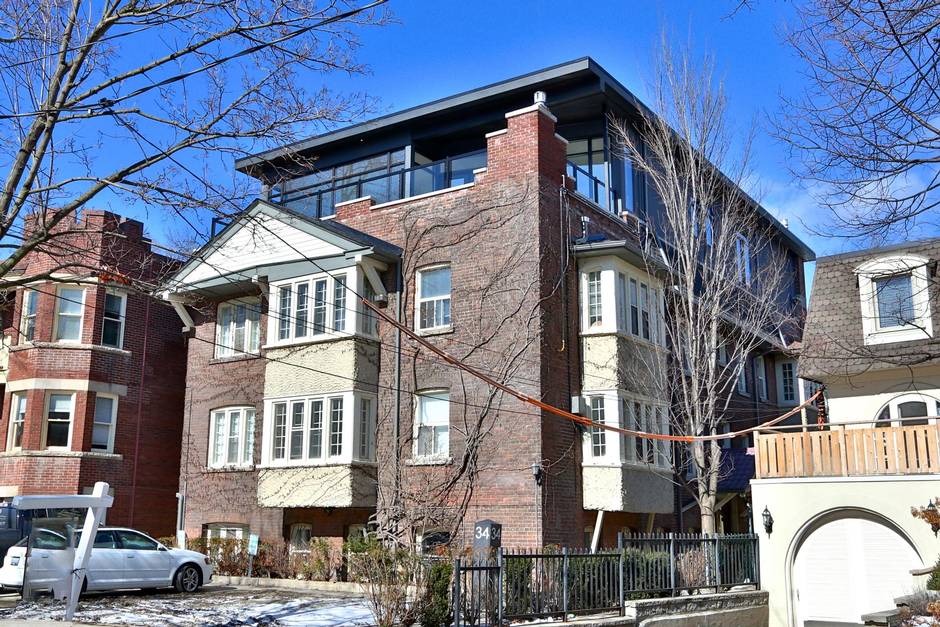 The apartment at 34 Rowanwood Ave., upon which a new modern condo has been built. (Unique Urban Homes)

Both the lovely light and skyline view were unobstructed by drapes or blinds. In fact, there was little furnishing of any sort in the two-bedroom residence, apart from elegant bathroom fixtures, the appliances in the kitchen, and three office chairs in front of the marble-framed fireplace. Realtor Paul Johnston said that the unit was due to be outfitted for display purposes the next day.

I’m glad I got there early. The homes reviewed in this column, after all, are almost always dressed and decorated by the time I see them. Which is okay – although it’s nice, once in a while, to visit a place before someone has hung art on the walls or cluttered up the space with furniture and clothes and other belongings. You get to see the bones of the structure, and to imagine freely how the house can be transfigured into a home. 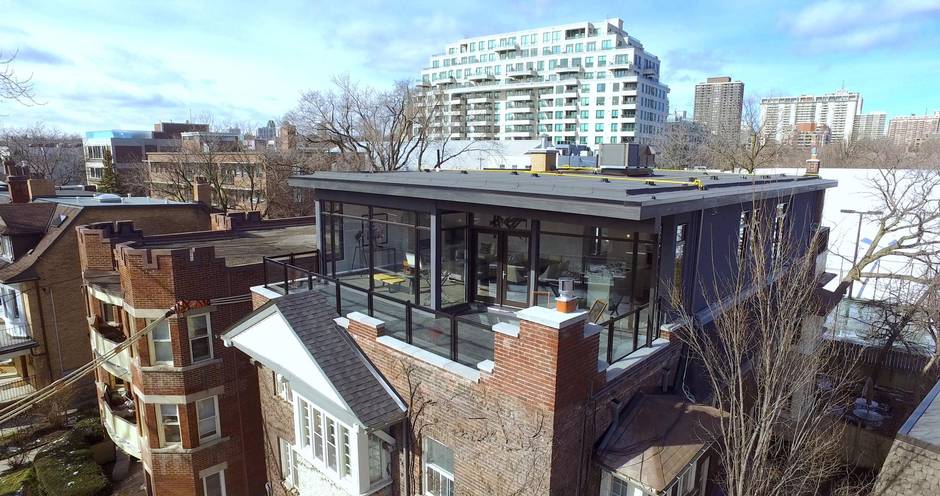 The skyline view is currently unobstructed by drapes or blinds. (Unique Urban Homes)

Given their final shape by Toronto architectural designer Enzo Loccisano, the bones of 34 Rowanwood are good. Of course, the eventual owners of the residence – it is on the market for about $2.6-million – could fix up the whole place in High Versailles, with flounces and cherubs everywhere. But doing so would cut across the grain of the place’s basic artistic logic, which is clean and modern.

The layout of space, for example, is unfussy. The master bedroom ensemble, with its ample walk-in closet and contemporary bathroom, is on the north end of a corridor bisecting the unit. This bedroom is joined to a deck that overlooks the courts and inflatable building of a tennis club, so there should be much privacy and very little noise except the light summertime clatter of balls and racquets. 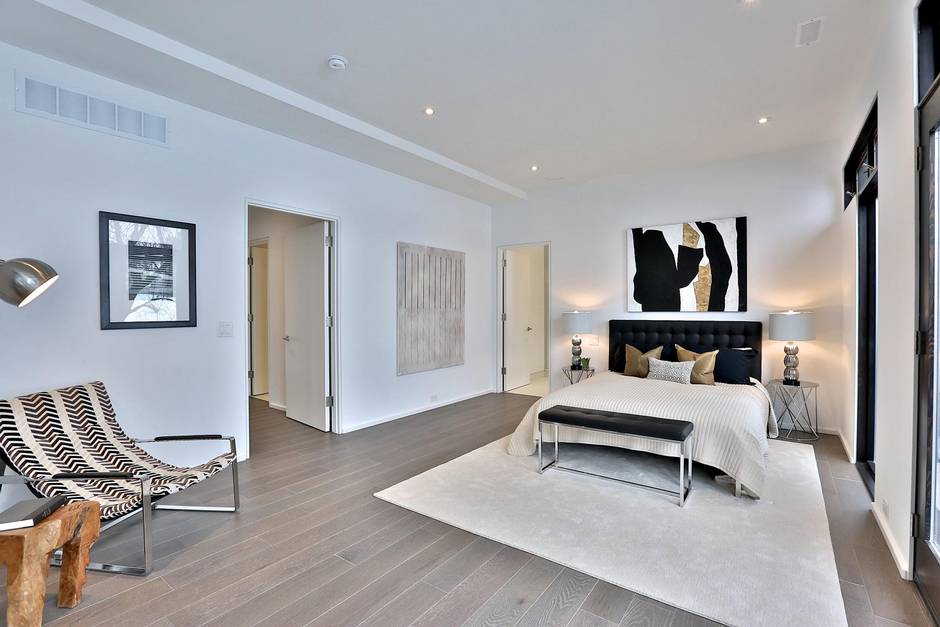 On the south end of the passageway is the open-plan living and dining areas, and the kitchen off to one side. Ceiling heights in the bedrooms and in this expansive southerly common room measure 9 1/2 feet, creating an atmosphere of loft-like openness reinforced by refined proportions. The broad, tall walls on either side of the fireplace seem to invite large paintings, probably abstract, and the overall sense of the place suggests that it could be quite suitably furnished with a few chairs and tables crafted in minimalist style.

Who will want to live here? A well-heeled couple or single, I suspect, with a yen to downsize from a house in Rosedale or some other deluxe Toronto district, but with no inclination to live in a downtown tower. With an area of just over 1,800 square feet, this unit is larger than a typical two-bedroom condo in a stack, but it comes equipped with several features of the kind that make condo dwelling an attractive proposition. 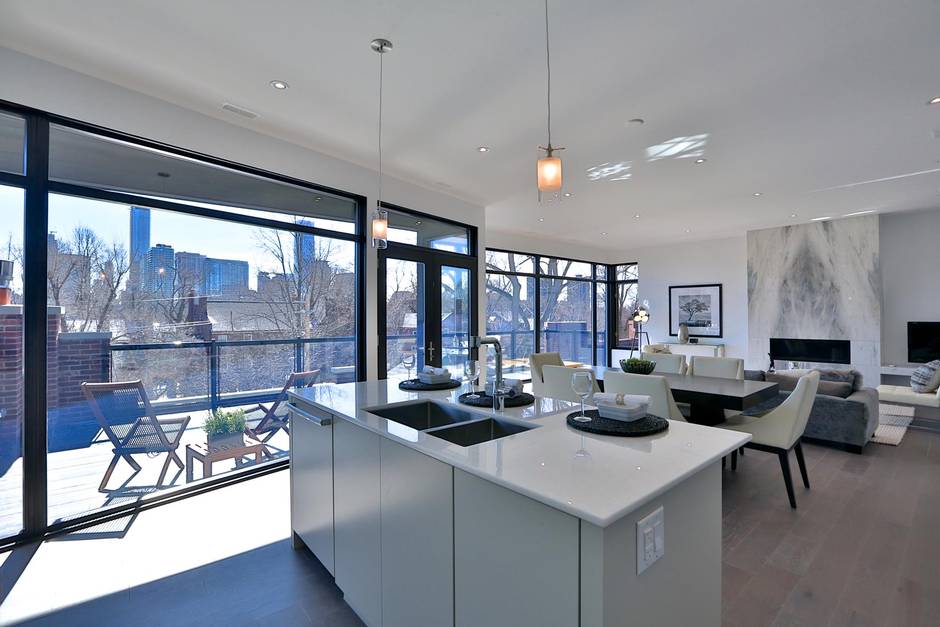 The main living area of the condo at 34 Rowanwood. (Unique Urban Homes)

One of them is an elevator. Its sole destination is the residence, and its ground-level entrance is conveniently situated only a few steps from the outdoor parking pad. (Hardy residents and their guests might prefer to climb the building’s common staircase, or make their way up the exterior emergency stair, which plunges dramatically toward the ground between handsome blue walls.) Another attractive feature is the compact, efficient kitchen, in which developer Ronald Mann has installed a microwave, fridge and dishwasher, and an oven, all by the high-end European manufacturer Bosch. 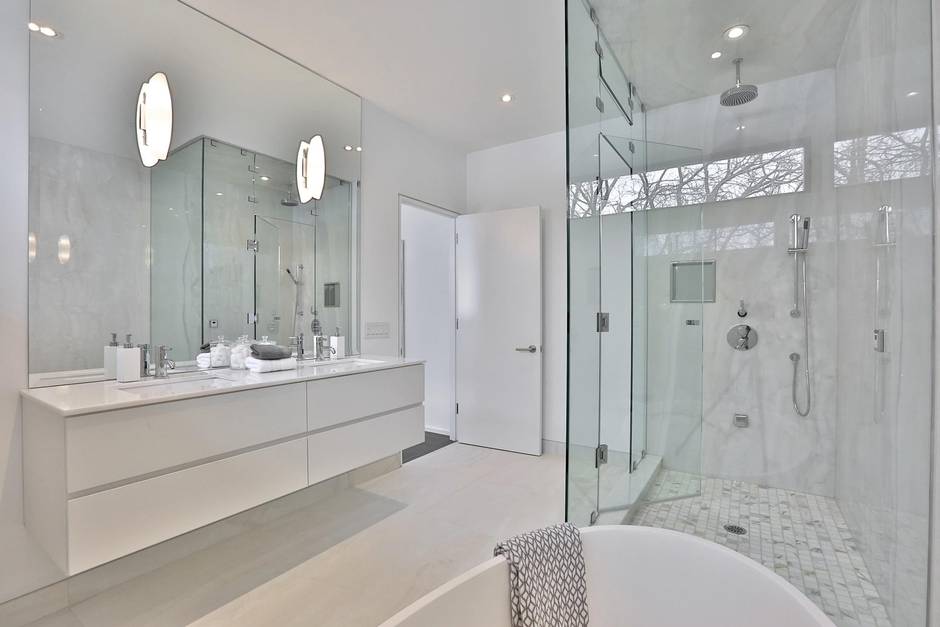 When all is said and done, however, this residence is somewhat out of the ordinary. I don’t mean to suggest there is anything unusual about the interior or the appointments, which are all straightforward and fine. But, as Mr. Mann said, dropping a single condominium unit on the top of an elderly apartment block is “not an everyday occurrence.” 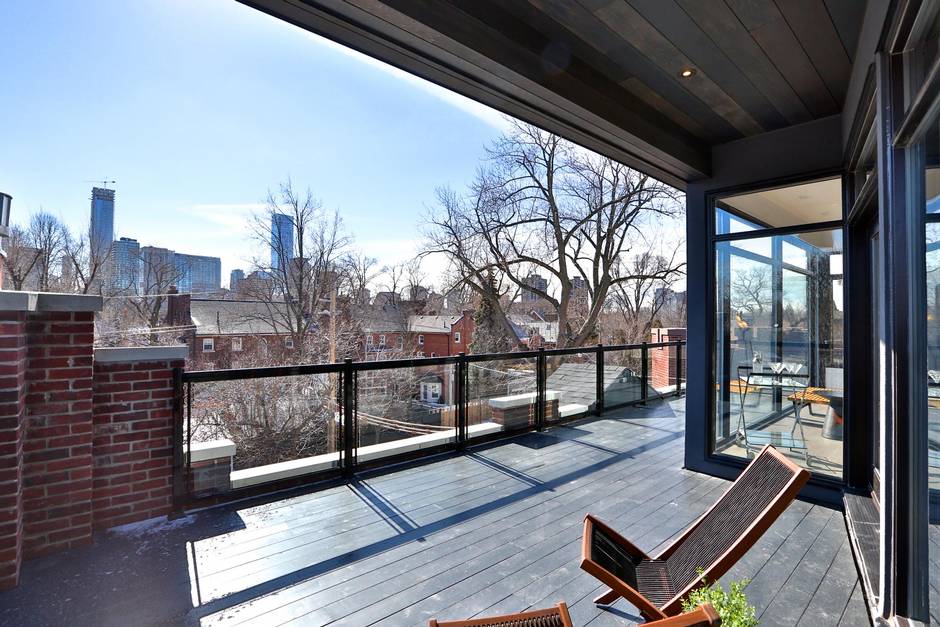 The skyline view from the condo at 34 Rowanwood, in Rosedale. (Unique Urban Homes)

Since 2009, when the developer began planning this addition to the Edwardian building, the project has been locally controversial. Rosedale neighbours, apprehensive lest the upward extension become a precedent in terms of height, tried to stop it. The heritage people at city hall opposed it. (They came around when certain changes were made to the plans.) Financiers were reluctant to back a real-estate scheme so different from anything they’d heard of.

But Mr. Mann, who describes himself as “tenacious,” persisted. The result of his labour is a little, slightly off-beat instance of downtown intensification, and, indeed, a beautiful one.