How do you make a building disappear?

This was Ian MacDonald’s task when he designed a new cottage for his family. The site is an island in Ontario’s Georgian Bay: blue water and rocky shore, one of the iconic Canadian landscapes.

“It’s tough and beautiful, but you are very exposed,” MacDonald says. “Sometimes, it’s hard to find a place to hide.”

So while his family’s old cottage needed repairs, he was torn between an architect’s desire to build new and a cottager’s desire not to mess up nature.

He succeeded at both. The 1,400-square-foot building is an ideal contemporary cottage: not big but comfortable, well sited and connected to the place where it sits. At a time when big, showy buildings are going up in the cottage country of central Ontario – and many other places in Canada – it brings back an older tradition, of occupying the waterfront modestly and quietly. 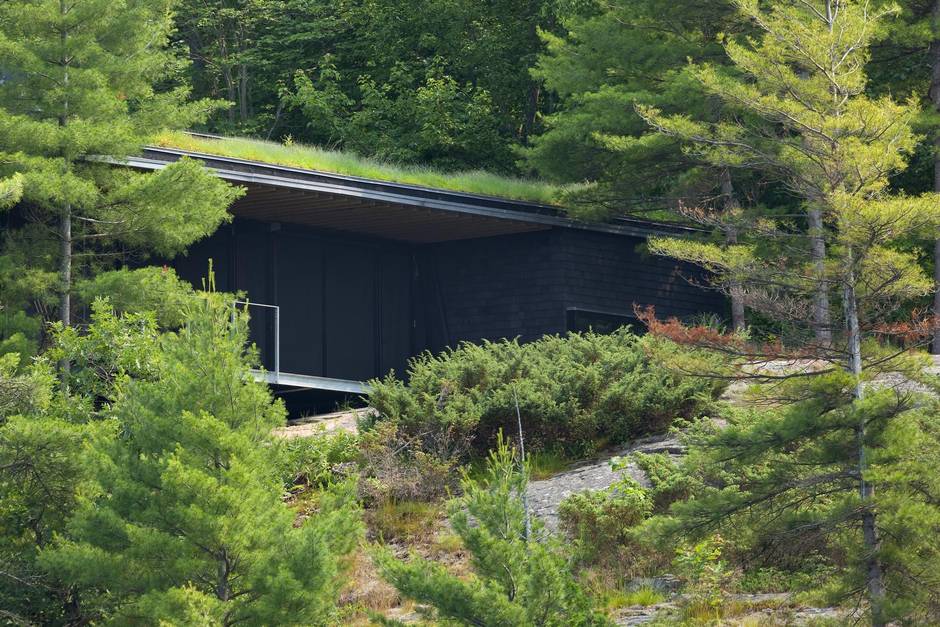 Ian MacDonald designed his cottage on Ontario’s Georgian Bay to be in sync with its surroundings. (Photos by Tom Arban)

So where is the place? As you complete a 29-kilometre boat trip from the town of Honey Harbour, the building hardly shows itself at all. From the water, it’s a black smudge in the shadows on a treed hillside; if you land and climb the pink rock, the cottage reveals itself as a sedate box of dark wood and glass, cached behind junipers and topped with an overhanging roof planted with grasses and wildflowers.

On the interior, MacDonald’s hand shows itself more fully. He has won numerous awards, including three Governor-General’s Medals for Architecture, on the strength of his house designs, which express a rigorous luxury of subtly modulated spaces and rich natural materials.

So, when he says the 1,400-square-foot cottage is “just a simple box,” this is not the whole story. Yes, it is simple in its ingredients – a narrow kitchen, an open living room and three bedrooms squared away; a small reading nook.

Yet, the spaces carefully shape your experience. You enter from the forested high ground, then walk through the narrow kitchen before you turn the corner and face the waterfront landscape: two walls of windows look out and down on an inlet dotted with granite outcrops, firs and pines. 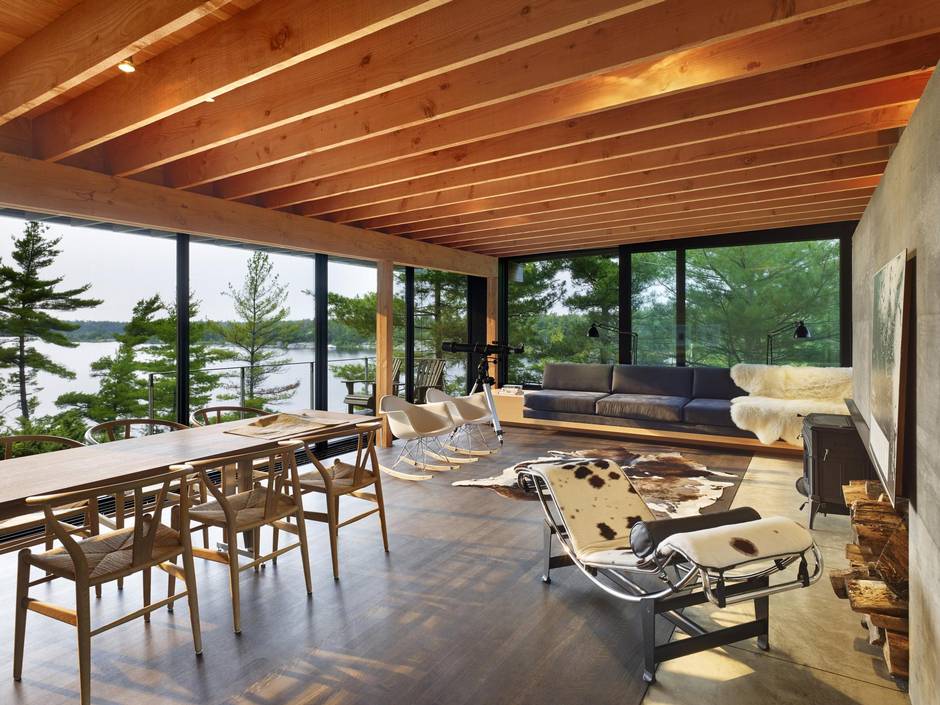 MacDonald says his cottage is ‘just a simple box,’ but the spaces carefully shape your experience.

MacDonald’s cottage sits on Go Home Bay, a region protected by the local township as part of a cultural heritage landscape; A.Y. Jackson captured the area on canvas in 1913.

“You go here to be in nature,” MacDonald says simply.

MacDonald, his wife Diane MacDiarmid and their two twentysomething sons love this part of the world. They have been coming to this spot for more than 20 years to swim, canoe, sail and hike. They also carry on the practice of roughing it even when it’s not exactly necessary. In winter, MacDonald sometimes skies in across the ice, pulling supplies on a toboggan. In summer, there are more projects for the family to work on together: Right now, they are building a boathouse.

The cottage itself, however, is highly polished. There is craftsmanship and consideration in each joint. Underfoot, white oak boards meet precisely cut slate and a jute mat that is embedded into the floor; the few walls include custom fir cabinets and two sleek built-in sofas, set low so as not to obscure the view. The furniture in the cottage is a greatest hits of Modernist design: chairs by Eames, le Corbusier and Hans Wegner. 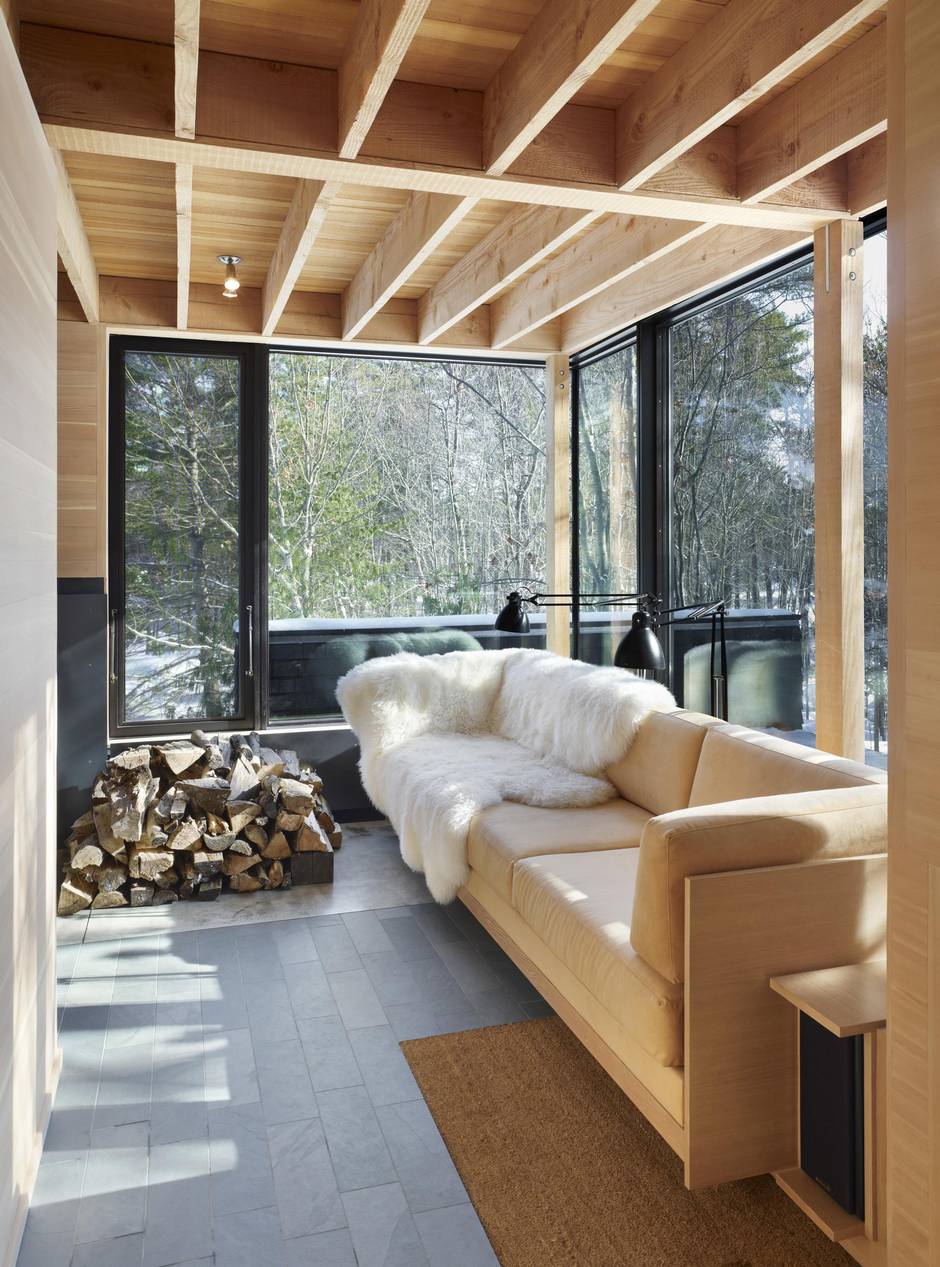 The ceiling is capped by open joists of rough-sawn fir, which speak to the tall, tough conifers that surround the place on three sides.

Still, they are comfortable there, MacDonald says. And why not? Inside, you are surrounded by warm, natural materials. In the living room, the ceiling is capped by open joists of rough-sawn fir, which speak to the tall, tough conifers that surround the place on three sides. The implicit message is clear: You are in an architect’s hands, but nature is in charge.

MacDonald’s connection to this landscape is deeply felt – he has been coming here for much of his life – and he has also been inspired by Georgian Bay’s architectural history. The cottages that were built here between 1900 and about 1970 had “a low profile and a recessive, quiet character,” he says. “They deferred to the landscape, making sure it was the natural setting that your eye went to first.”

The cottages were (some still are) small, one-storey structures with gabled roofs; usually painted in a dark colour, with few windows and surrounded by porches. Those porches are comfortable to hang out on summer days, but they also have a visual effect: They create an unusual shape, not quite like a house but something more abstract, and your eye can’t tell how large it is. 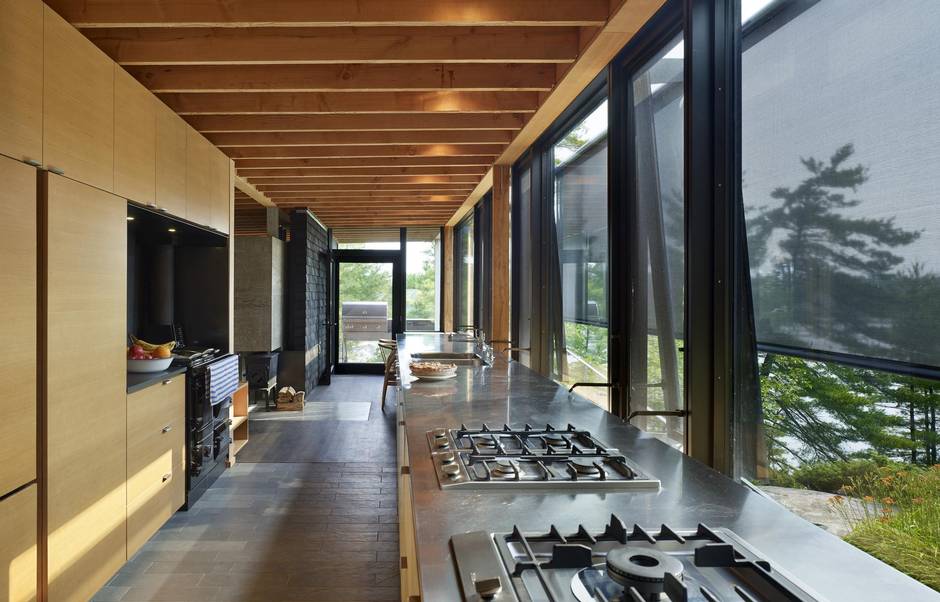 This is a tradition – what architects call a “vernacular” – that captures a culture of modesty and love of nature. The ideal was enforced in part through a desire to make peace with the neighbours. “Traditionally, neighbours would consult with anyone within visual distance when they built,” MacDonald says. “There was a sense of community and it was driven by a desire to do the right thing.”

Today, new buildings are regulated by the Township of Georgian Bay; and MacDonald, who wrote some of the township’s official plan, speaks with disappointment about the way insensitive new buildings – some with neoclassical details that have nothing to with any local tradition – can be seen from kilometres away. On the boat ride in, there is a panorama of low, distant islands. Like the old cottages, they defeat the eye: Are they near or far, small or massive? This view “is a symbol of nature’s power and authority,” MacDonald says. And, in the past few years, someone has built a cottage, with a sort of lookout tower, that pierces the treeline. To those with a sensitive eye, something powerful has been lost.

Go Home Bay is about two hours north of Toronto and the area was relatively remote until recently. To the east, closer to Toronto, a railway and steamboats busied the lakes of the Muskoka region from the 1880s on. Today, Muskoka is a playground for the rich, and new development there means multimillion-dollar houses, suburban neoclassical design and big boats.

MacDonald was inspired by Georgian Bay’s architectural history. The cottages that were built here between 1900 and about 1970 had 'a low profile and a recessive, quiet character,' he says.

MacDonald sees the same thing coming to his beloved region. Rising property prices, more people in the Toronto region and the 2011 improvement of nearby Highway 400 are all coaxing more cottagers – many with considerable means – toward Georgian Bay.

MacDonald has no malice for those who choose to build insensitively. “People aren’t thinking about the effect their place is having on everyone else,” he says. But it’s clear that he would like his place to set an example.

“I hope people can understand that you can build something of quality and something comfortable,” he says, “but you can do it without changing the landscape.”

That is a valuable lesson anywhere, and especially here.