For decades, two sentries guarded the gateway to midtown at Yonge and Bloor: the bronzy CIBC building at 2 Bloor West, and the Hudson’s Bay building at 2 Bloor East. Today, a forest of towers – some complete, some creeping skyward via crane – all vie for attention at this busy intersection.

But CIBC was first, and the architect-developer behind its construction, Peter Henry Caspari (1908-1999), was a towering figure on the Toronto landscape.

“He was always looking for the next turn in the road, he was always looking for the next question after the answer,” says his son, Dr. David Caspari. “And it served him in good stead – for instance, he took the approach that development would follow the subway lines, and that was way before anybody else took that point of view.” Indeed, connected to 2 Bloor West and following the Bloor line was “The nicest way from Yonge to Bay,” Cumberland Terrace. 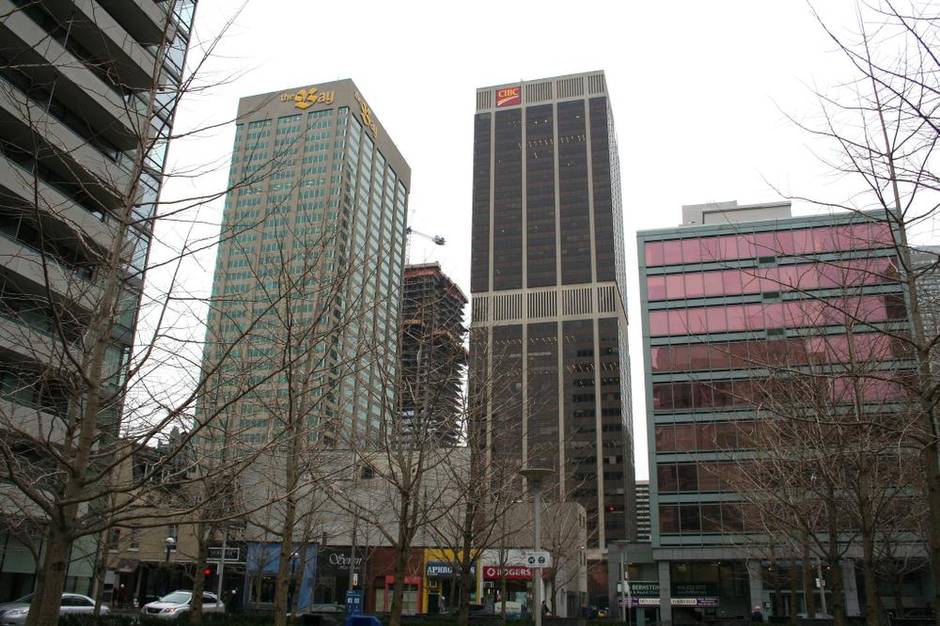 The CIBC building at 2 Bloor St. W., Peter Caspari’s last major work in Toronto. Photo by Dave LeBlanc for The Globe and Mail 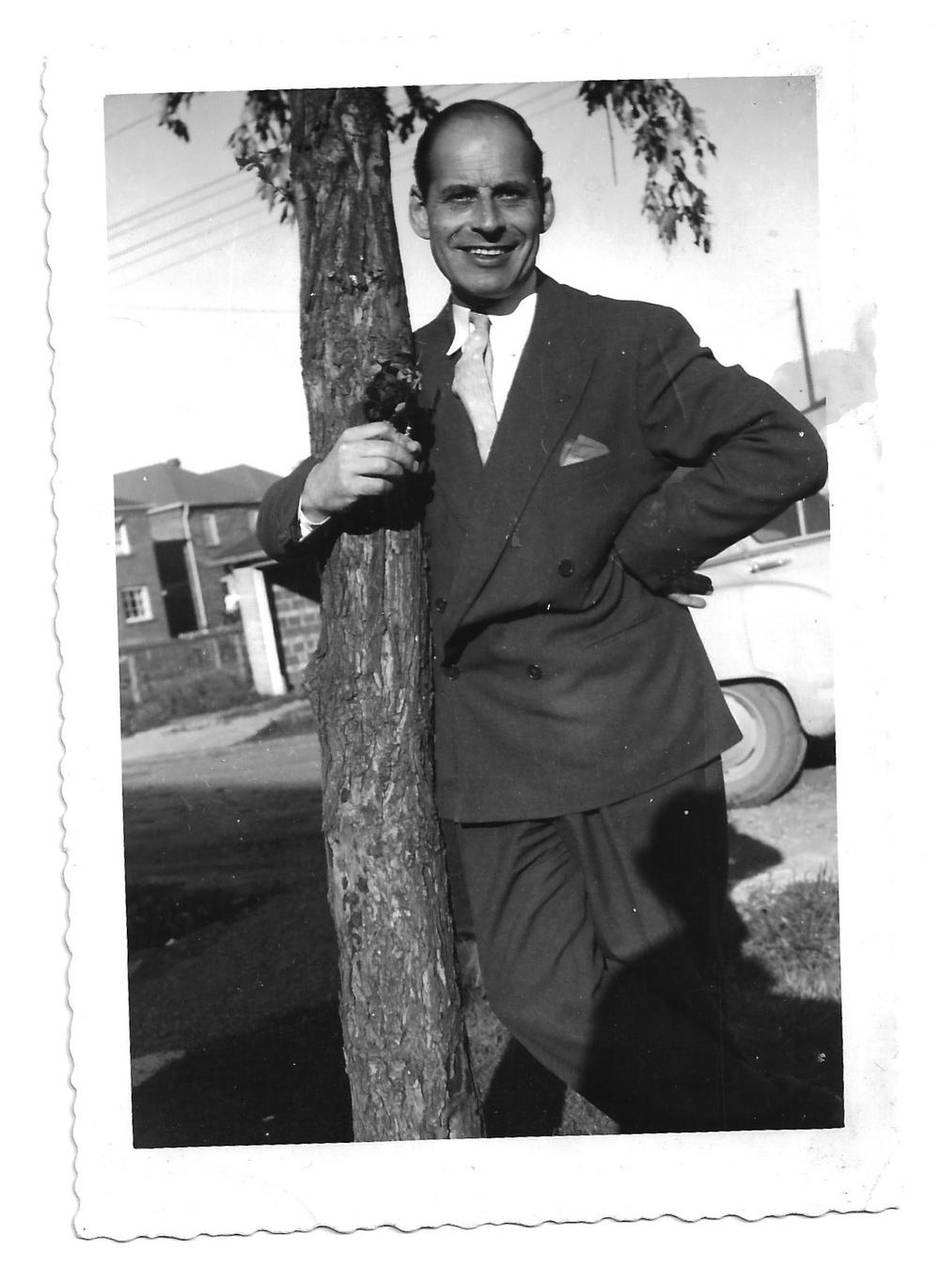 As with any good idea, however, others followed in his footsteps: an October, 1973, Globe photograph shows both towers under construction, with Mr. Caspari’s tower (with Ogus & Fisher) edging out Crang & Boake’s HBC tower by about nine floors.

Of course, being ahead of the curve meant he often locked horns with city bureaucrats. In fact, as the 34-storey tower was nearing completion in December, 1973, Mr. Caspari said he was “through with major design and development in Toronto – at least until City Hall makes up its mind on what it wants.”

Perhaps he was thinking back to a battle he’d fought more than two decades earlier, when he lobbied for an apartment complex behind Maple Leaf Gardens, or forward to a megaproject then a few years in the future, Sheppard Centre. “He didn’t tolerate resistance or objection terribly well,” confirms Dr. Caspari with a laugh.

In any case, by the early 1980s when he retired, the German-born architect had left an incredible bricks-and-mortar legacy to his adopted city, and all created well after he’d celebrated his 40th birthday.

Raised by affluent Jewish parents, young Peter Caspari attended the Berlin Building College to study building and architecture. By 1933, the six-foot-tall, black-haired, “imposing” young man was married to medical student Erika Lichtenfeld (1912-1998) and a member of a Jewish youth group in opposition to the rising National Socialist Party. When the family chauffeur/mechanic “tipped him off to the fact that the Nazis had him on the list to pick him up,” says Dr. Caspari, “he and my mother got in a train and left for Switzerland.”

From there, the couple went to London, where Mr. Caspari learned English quickly in order to secure work. That came quickly also: According to English-heritage.org.uk, Mr. Caspari’s first effort, Kingsley Court (1933-34), a Z-shaped, six-storey apartment building for Davis Estates, was “one of the first blocks of flats in an expressionist style in England.” The website also states Mr. Caspari was a “former assistant of Erich Mendelsohn,” a pioneer of the art-deco style and an associate of Ludwig Mies van der Rohe and Walter Gropius. 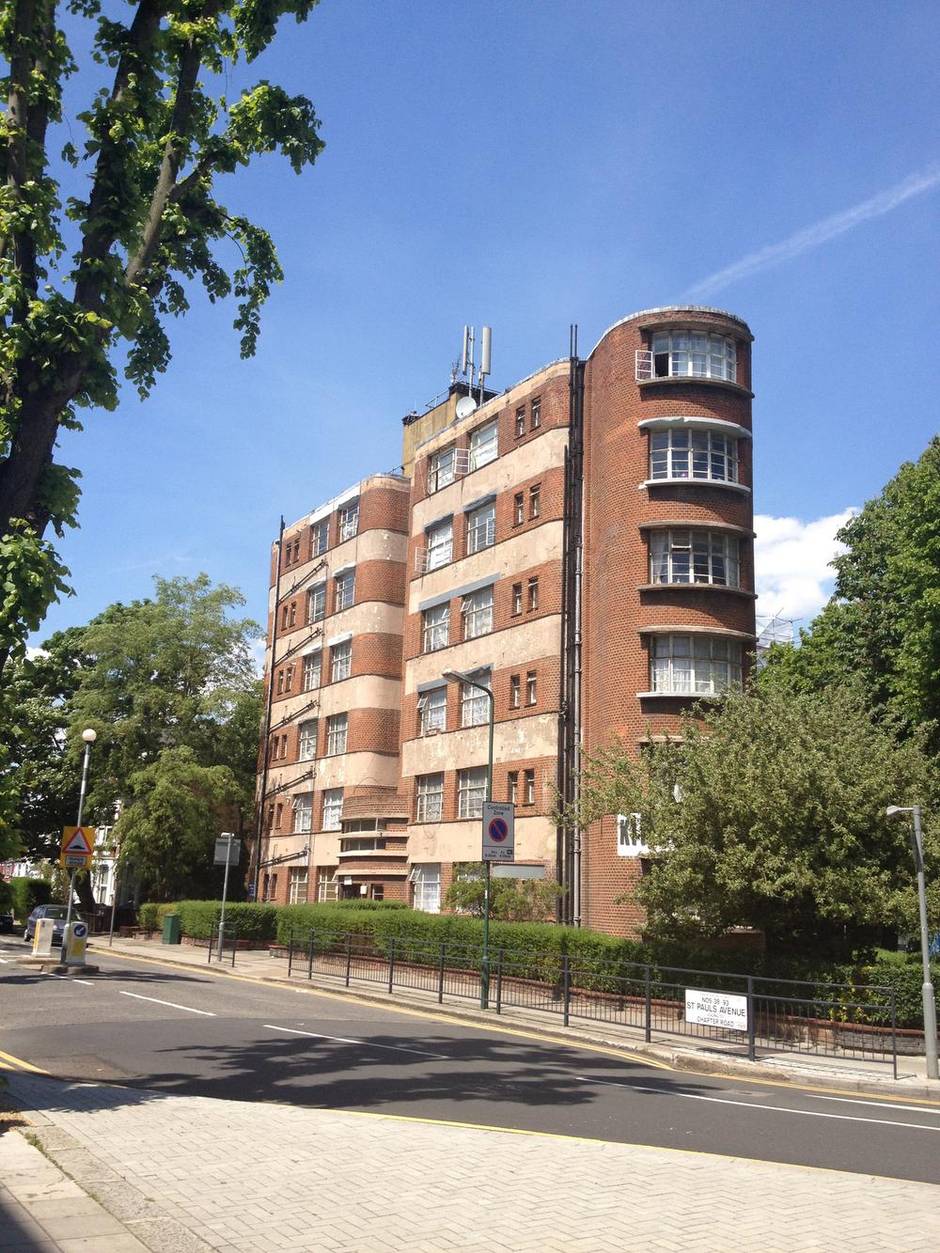 Kingsley Court in the London borough of Brent. Photo by Claire Bennie.

This led to the design of more apartment houses in the Streamline Moderne style. Eventually, the curving walls and banded brick would give way to the angular lines of the International Style; by 1939, his no-nonsense Coleman Court on London’s Kimber Road would foreshadow the first buildings he’d design in Toronto.

But why did he choose Canada’s then-second-largest city? Why not Montreal, or New York?

“If you asked him, he would’ve said that there’s lots of opportunity in Toronto, but why more here than [there], who knows?” asks Dr. Caspari, who was born in England in 1948 but moved to Toronto at age three after his father had made a number of scouting trips. Perhaps his father’s “many connections to European money” considered English Canada a safe place to invest; indeed, shortly after settling in and developing/building the “small-m” modern Vincent Court and Buckingham Court (both on Eglinton Avenue West near Spadina Road) in 1953-54, he was in Calgary working on Rideau Towers, a four-building complex that avenue magazine claims was the city’s “first post-Second World War luxury apartments.” 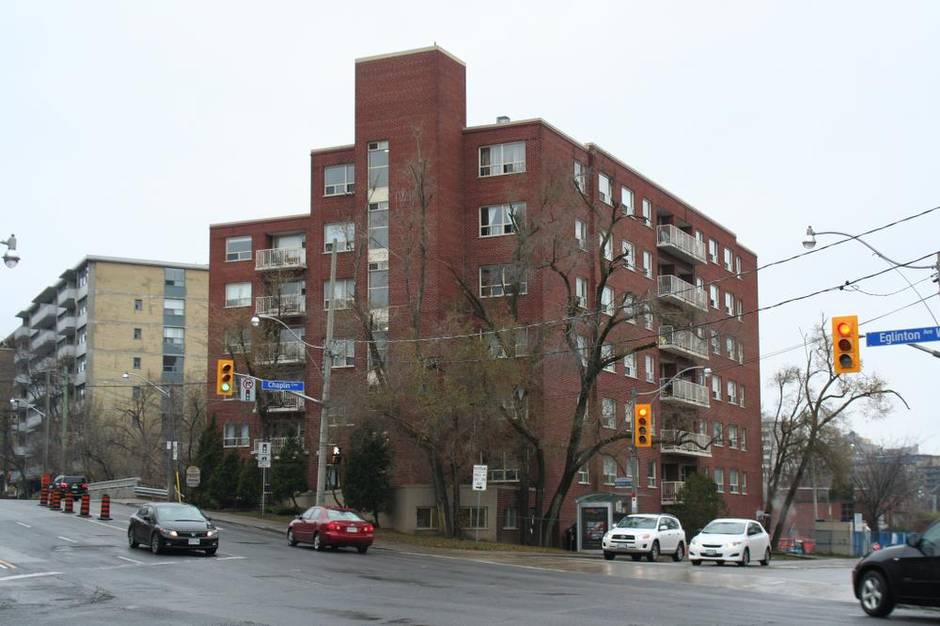 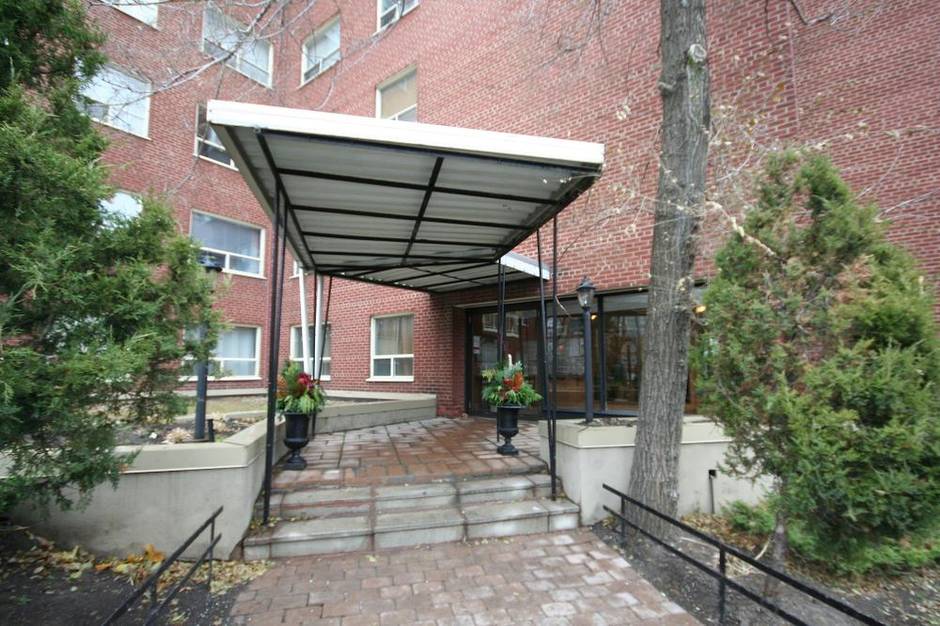 Photo by Dave LeBlanc for The Globe and Mail

In February, 1954, after a year of negotiation with the city, The Globe and Mail announced that Mr. Caspari and a group of Swiss investors had received the go-ahead to erect “the first major residential redevelopment in Toronto to be undertaken by private enterprise.” City Park would consist of three crisp, “capital-M” Modernist 14-storey towers tucked neatly into four acres bounded by Alexander Street to the north, Wood Street to the south, Church Street to the east and approaching Yonge Street to the west.

While most evidence crowns Peter Dickinson’s Benvenuto Place, which opened in stages beginning in 1953, as the “first” High Modern apartment building in Toronto, the domino-like trio containing 774 rental units nonetheless made a huge impact on the conservative city consciousness, as well as that of young David, who remembers climbing into his father’s chrome-laden Chrysler Imperial on Sunday afternoons to inspect the site: “That smell of wet concrete,” he laughs, “I remember it well.” 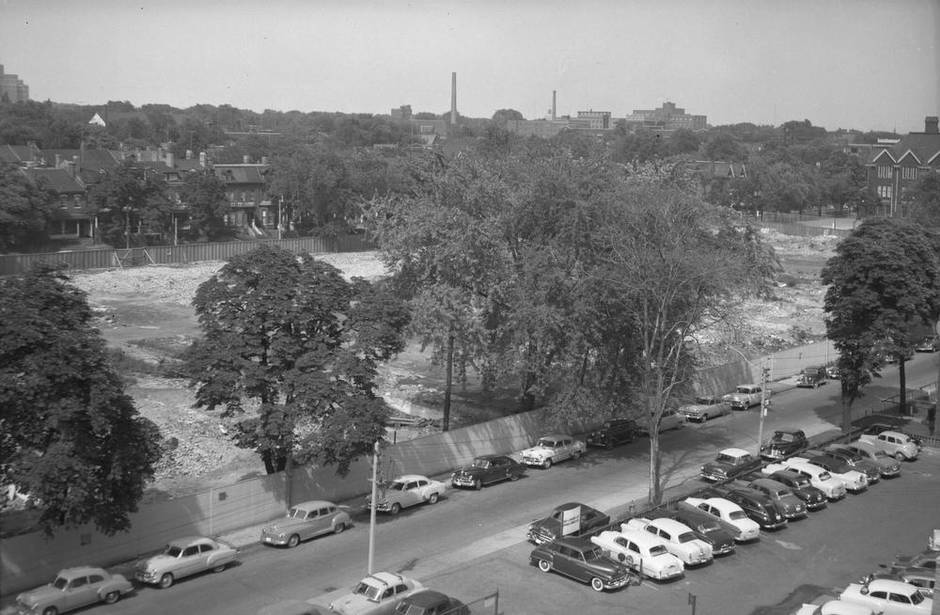 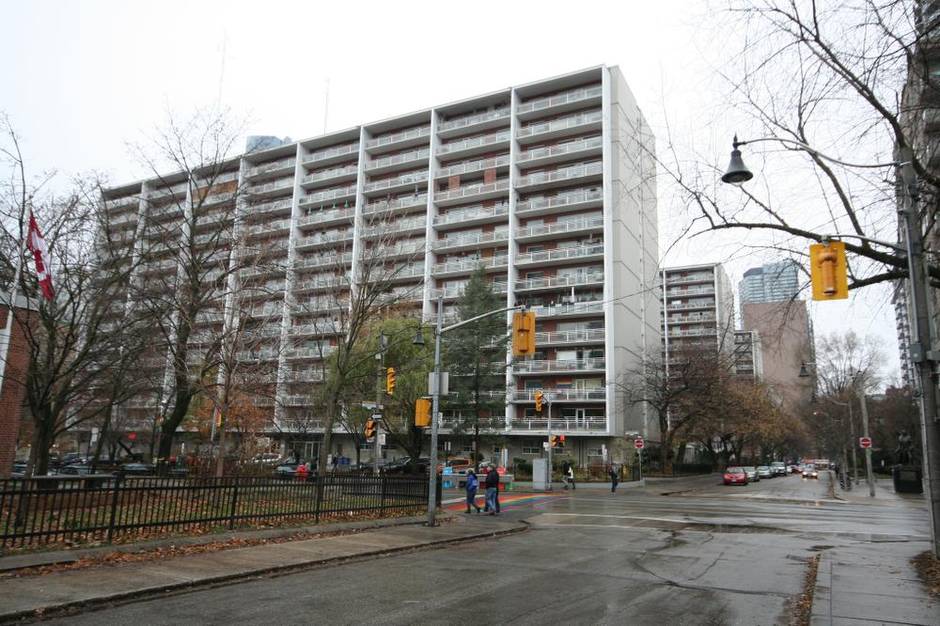 City Park today. Photo by Dave LeBlanc for The Globe and Mail

Still in surprisingly good repair, the City Park complex is, today, notable for its masterful manipulation of monumental scale with expansive, humanizing green spaces in between; use of travertine on lobby walls; and projecting concrete frames (containing balconies) that soften each tower by “floating” all that visual weight above street level. In East/West: A Guide to Where People Live in Toronto (Coach House, 2000), Douglas Young wrote that “waiting lists are long” for the buildings, which became non-profit co-operatives in the early 1990s, and concluded that the scheme is an example of “high-rise, high-density site planning at its best.”

And yet, Mr. Caspari’s name isn’t on the tip of our collective tongue (maybe it is on Sunnydene Crescent near Bayview Avenue and Blythwood Road, a street he created) like other mid-20-century Toronto architects. Perhaps, suggests Dr. Caspari, it’s because he wasn’t a “pure” architect such as John C. Parkin or Dickinson. He was a developer, too, “which was looked upon as being second-rate,” and despite certain refinements such as crisply tailored suits and an office at Mr. Mies van der Rohe’s TD Centre, he could be “moody” and behave like a “bull in a china shop.

“I don’t think he saw himself as the architect’s architect.”