Before you find out what’s on view at Pari Nadimi Gallery, the show’s title, Radiant City, snags your attention. Architecturally savvy folks will catch the reference: The 1933 book La Ville Radieuse, written, and dedicated “to Authority,” by the French-Swiss architect and theorist who, since 1920, had styled himself Le Corbusier.

For many people who care about the look and liveability of North American cities nowadays, the name raises hackles. Le Corbusier, on this view, was the last century’s leading conspirator against the organic, humane, casual city, and a wily intellectual who seduced whole generations of architects and urban planners with his utopian, suspiciously right-wing speculations.

The notorious (and never implemented) master-plan for Paris he devised in the 1920s, it has been said, provided key inspiration for the widespread postwar bulldozing of old urban neighbourhoods and the replacement of their fabric by monotonously repeated, presumably “soulless” residential brick and concrete high-rises. He is credited with inventing the mischievous idea of the “tower in the park,” now a notion in disgrace, but enormously influential among planners, suburban residential developers and public housing agencies everywhere in the decades between 1950 and 1980.

This is not the place to debate how much, if any, blame for the banality of Cold War architecture and urban design can be legitimately laid at Le Corbusier’s feet. In any case, many urbanists, architects and citizens without portfolios have made up their minds on the matter. But it’s good for our heads to keep puzzling over our heritage from the past. We might ask, for example: Was the postwar history of multifamily dwellings – the era and the field in which Le Corbusier’s disciples allegedly made a very big mark – really the wasteland it’s now made out to be? 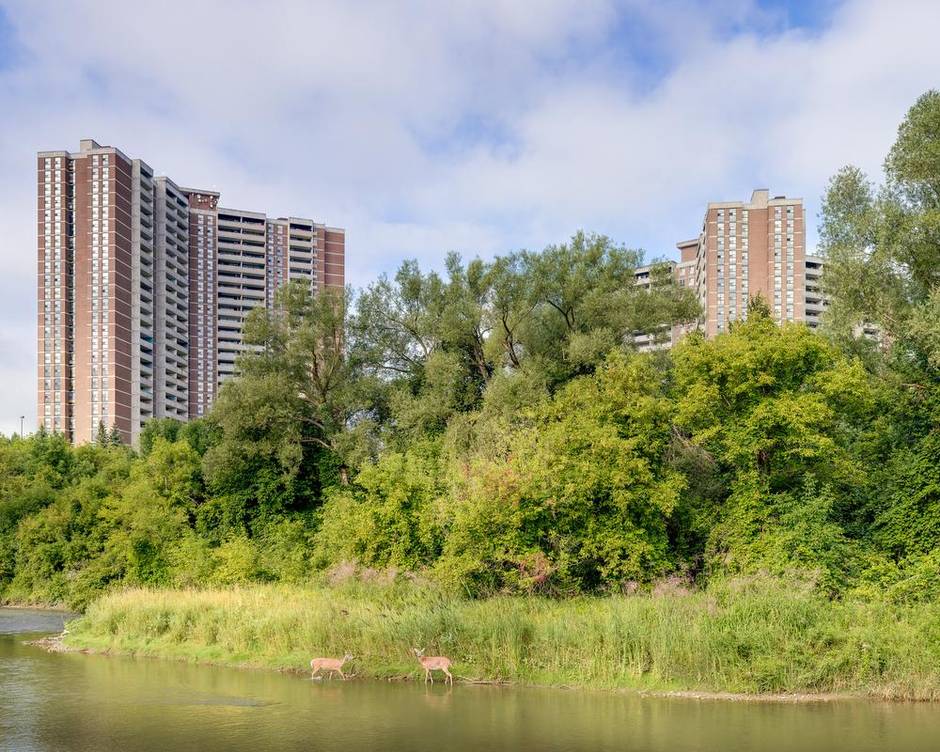 Riverside Apartments, Kipling Ave., with deer on the Humber River. All photos by Jesse Colin Jackson 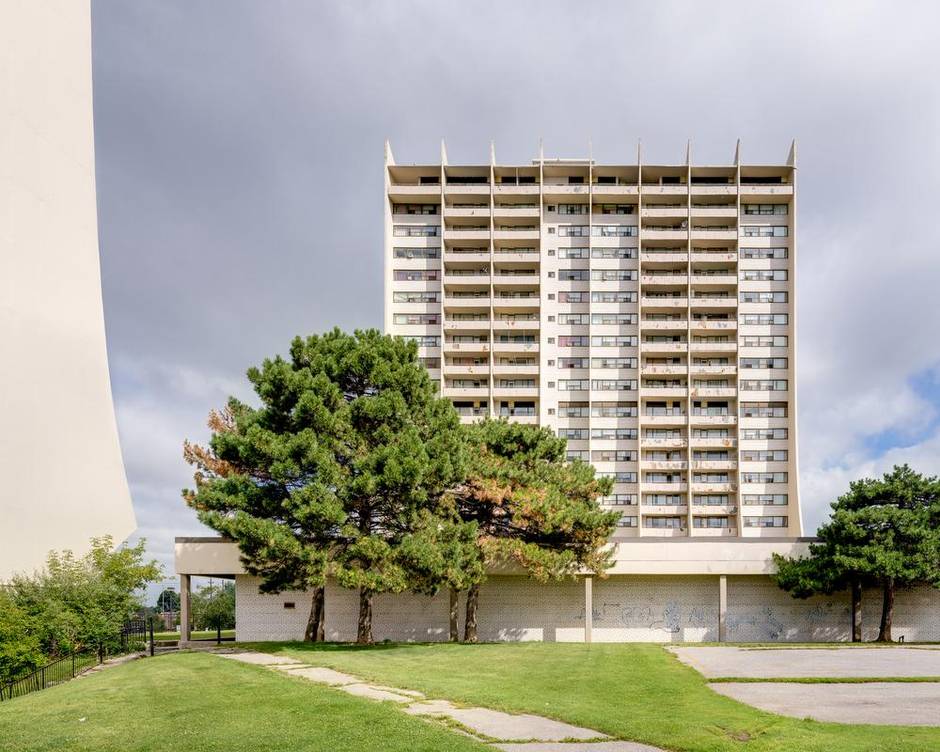 In Radiant City, Canadian artist Jesse Colin Jackson answers this question with a thumping No. Each of the nine large-format colour photographs in his show is an admiring portrait of a high-rise apartment block put up in suburban Toronto during the years of postwar commercial modernism’s noon (the 1960s) or of its gradual twilight in the 1970s.

At 36, Mr. Jackson is too young to remember the time when the buildings he documents were new. Distance from that moment, and resistance to the condescending opinion common in our own day, perhaps explain the resemblance of his image-making to the photography of themselves that elderly people often appreciate – frank about wrinkles and blemishes, but not ruthless; not a cover-up, but respectful. 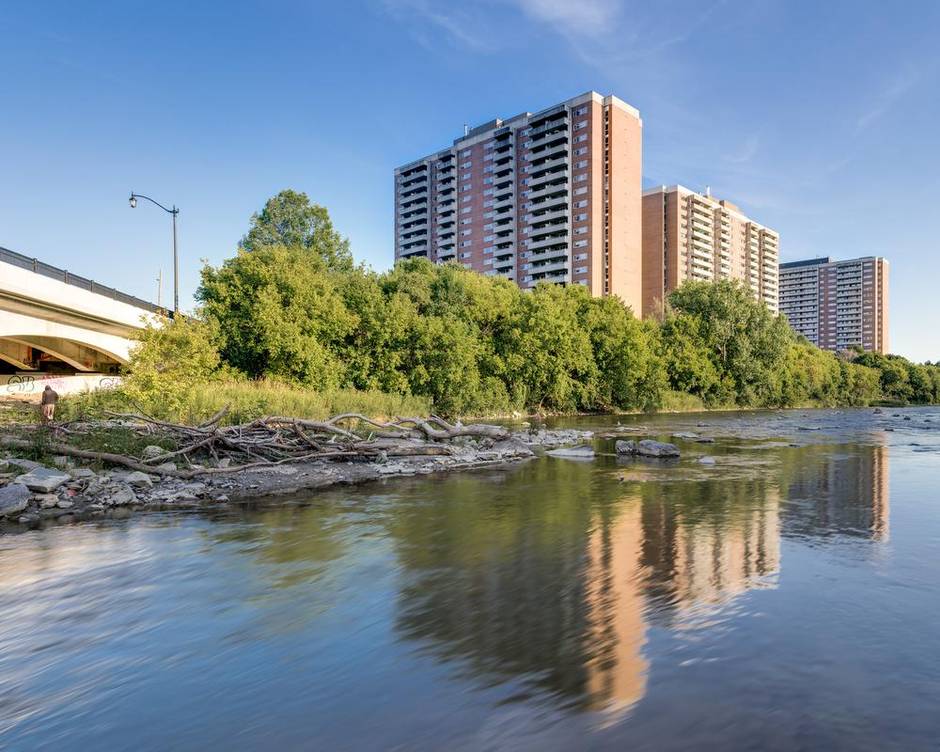 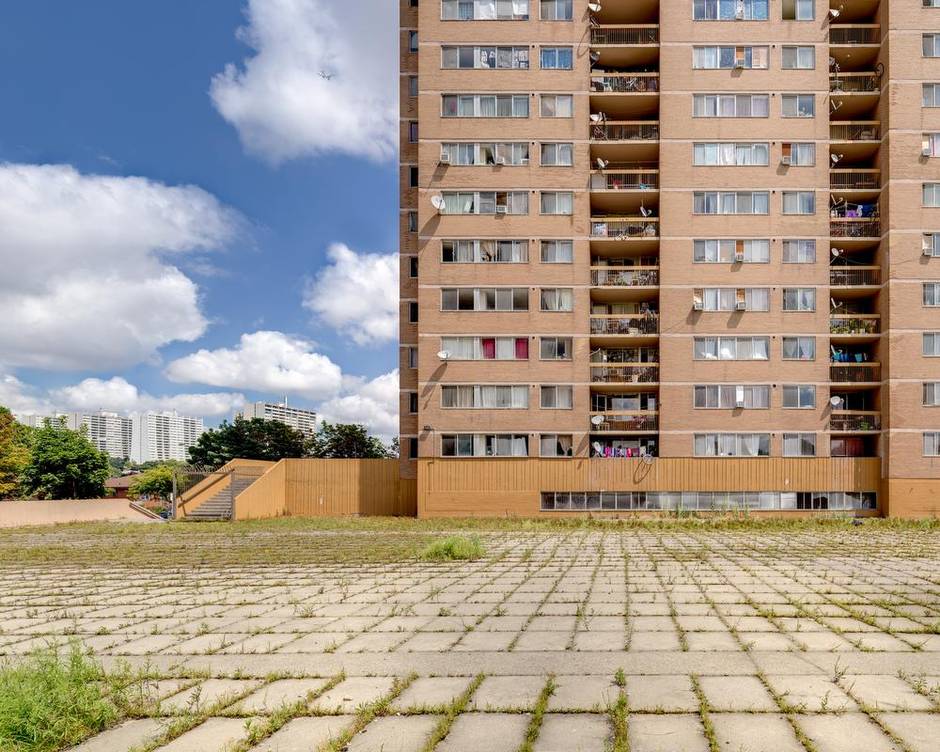 The topics of these pictures are, for the most part, indeed getting on in years, and Mr. Jackson makes no effort to conceal this fact. Façades are missing bricks, reinforced concrete surfaces are rain-stained, rust shows in metal balcony-fronts and window frames, and some decorative pine trees, planted a generation ago in the interval between the buildings and the lawns surrounding them, look decidedly parched and tired.

But however candid he manages to be – or has to be, given his medium, which ordinarily forgives little – Mr. Jackson has done all within his power to communicate the optimism, the promise of sunlight, fresh air and freedom, that the most mindful designers of these structures thought they were offering to the first tenants. The shiny, new tower rising in parkland was imagined by its theorists and promoters to be the cure for the evils of slums and crowding, a healthy mixture of dwelling and nature, a way to accommodate hundreds of people comfortably within a small footprint. 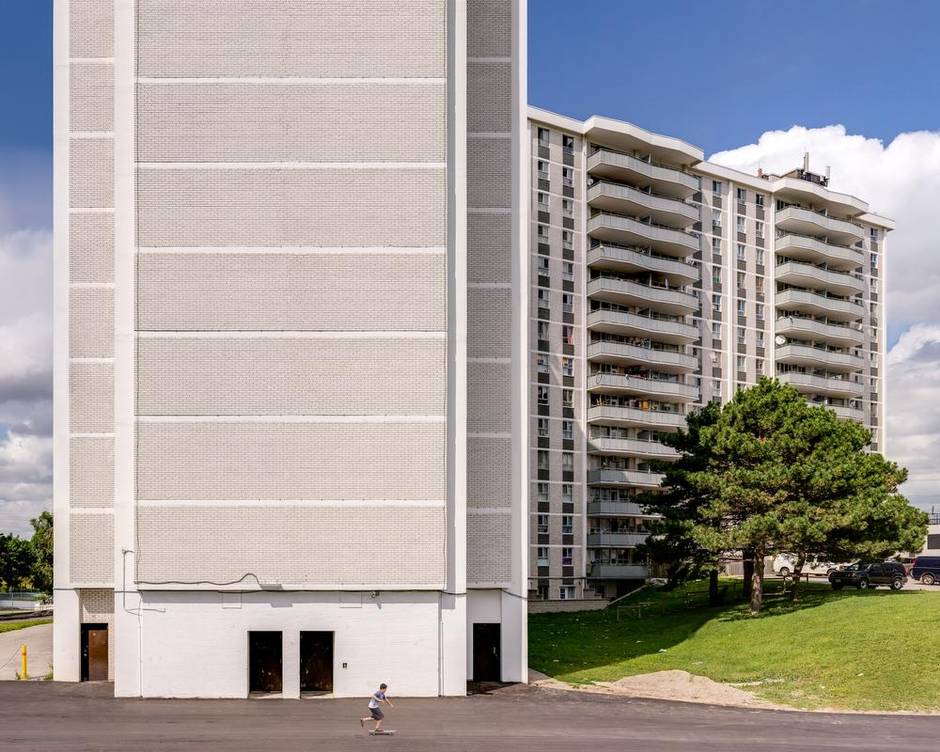 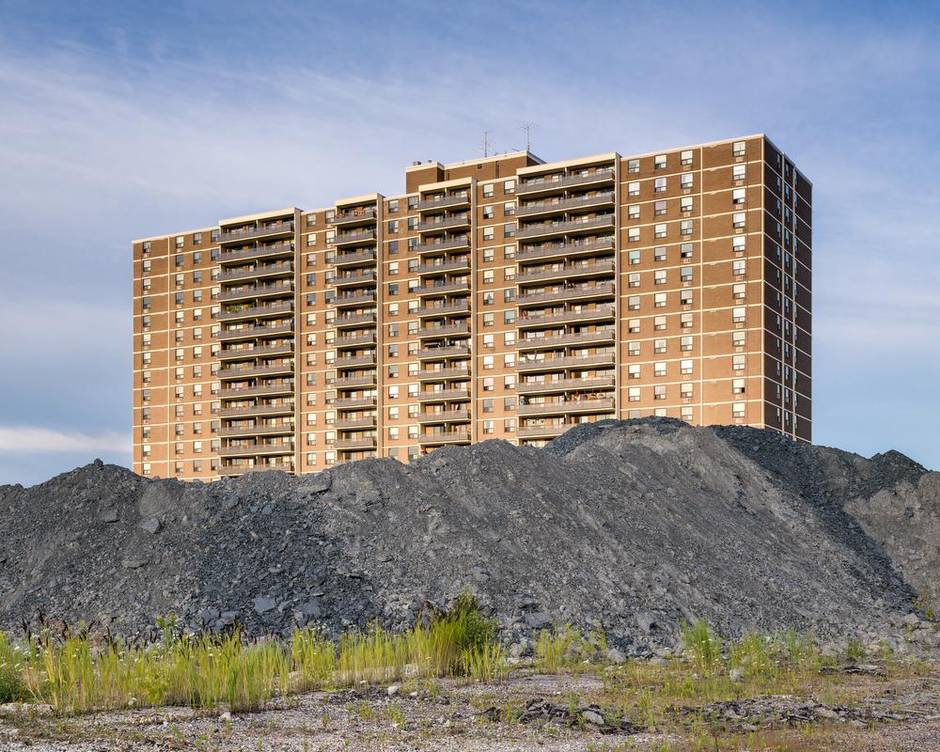 To evoke these idyllic visions, Mr. Jackson snaps a tower and its shimmering, summery reflection in a free-running stream. Another image depicts an apartment block, deep within the city, that looms over a river, beside which shy deer graze. In another, a kid zooms by the tall apartment building on a skateboard – a high-rise child apparently carefree, full of energy, surely well-loved.

Trained in the University of Toronto’s architecture school, and now a professor of art in the Los Angeles area, Mr. Jackson knows, of course, that things inside the towers haven’t turned out as Le Corbusier and their planners and architects intended.

A statement that accompanies the show admits the artist’s “ambivalence toward this progressive project in the face of the complexities these structures embody” – such “complexities” as their decay, the concentration of “much of Toronto’s urban poverty,” and their latter-day reputation as “products of modern ideologies gone awry.”

Little ambivalence, however, is detectable in the images themselves. The mood in Radiant City is upbeat, affirmative. The pictures portray their subjects, in the words of the statement, as “locations of past glory, current dynamism and future potential.” The show argues earnestly (but not, I think, altogether persuasively) that the time has come for a serious review of the currently orthodox (negative) regard for Le Corbusier’s teachings, and for the numerous ways his thought has shaped the contemporary city.