For most of the 50-odd years since the first modern metal cargo containers chugged out of a New Jersey port bound for Texas, the big, dumb boxes got no respect from anybody outside the transportation industry.

Then, starting in the 1990s, architects, artists and designers discovered them, and they became chic.

Proposals for snap-together houses, condos, schools and offices cobbled from these strong, simple building-blocks of globalism suddenly popped up in magazines across the world.

The vogue among the professionals didn’t last long. But it didn’t fade before creating a legacy of interesting architectural ideas with durable appeal. The best of these projects explored and exploited the hard-hat poetics of the shipping container – its inevitable associations with nomadism, placelessness, movement and disposability.

And the deployment of containers satisfied and helped shape a niche affection that persists to the present day. The American architect Wes Jones, an early advocate of container-based design, once told me that the aficionados include “Popular Mechanics folks – a subculture that is interested in containers for their cleverness side, as clever ways to do housing. Then there are the readers of Wired – techno-savvy, into the global mystique of the container … It’s about embracing mass consumption, in ideally a critical way.”

Judging from the unusual house he has proposed for an ordinary residential double-lot in inner-city Hamilton, you might say Toronto designer Jason Halter is attuned to both the Popular Mechanics and Wired tribes of container fans. His dwelling embodies a no-nonsense, lunch-bucket aesthetic – “Steeltown gets a steel building,” Mr. Halter said – and it has been crafted to suit a young man whose taste the designer calls “iconoclastic.” 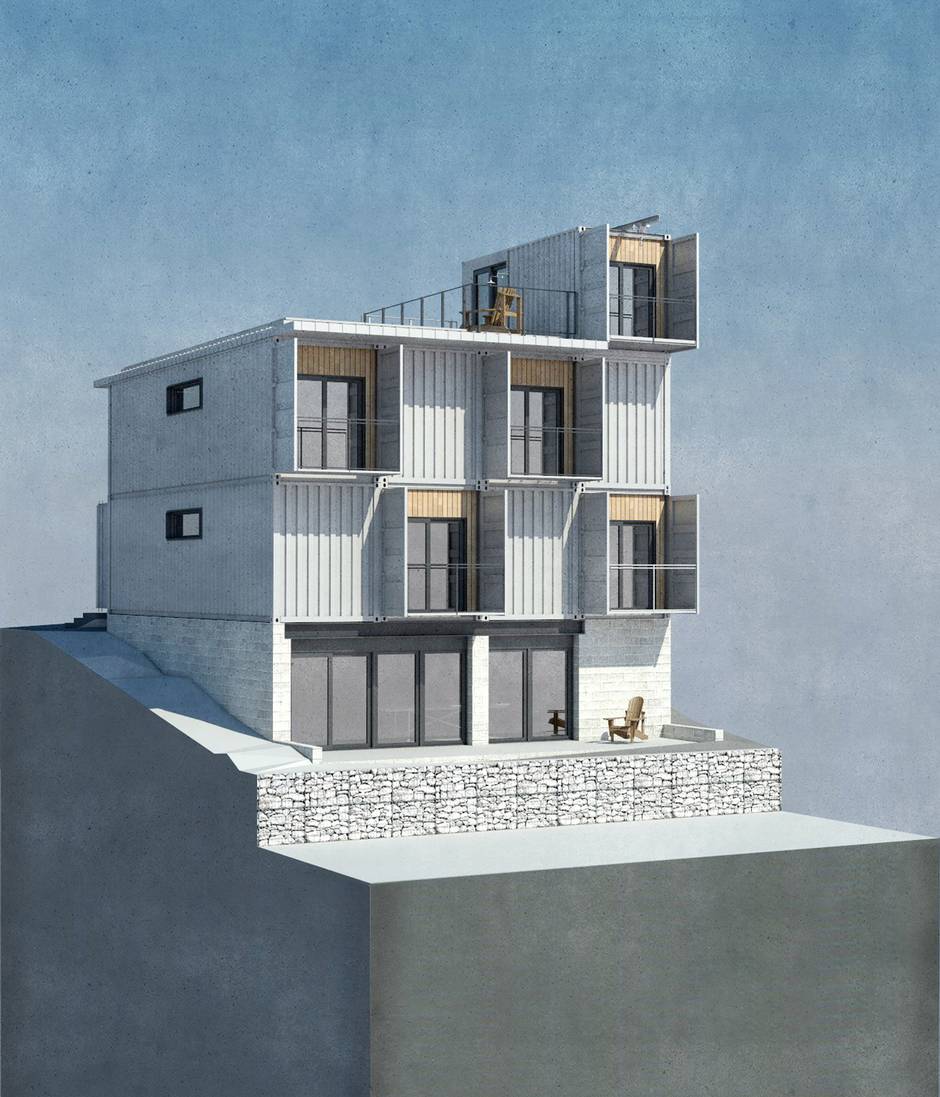 Rendering of a planned home in Hamilton, Ont. made from shipping containers (Jason Halter and Brent Schmidt / Wonder Inc.)

The two-level house will be constructed from eight 40-foot steel containers, each weighing 10,000 pounds and fabricated in China. They will be adapted for residential use at a factory in Etobicoke before being shipped to Hamilton. The stacking of the units will be staggered, to produce deep overhangs for shading and to lend rhythm to the exterior composition. The steel skins of the boxes will not be clad with siding. Instead, they will be surfaced with a kind of high-performance brick-red paint used in the aerospace industry. (Mr. Halter’s client chose the colour, which will probably help ease the way of the flat-roofed, otherwise modernist structure into its neighbourhood of Victorian Gothic residences.)

The roof will be planted with drought-resistant sedums and grasses.

The interior area, running to about 2,560 square feet, is divvied up into 10 rooms, with a large kitchen and living room. It will be separated from the weather by spray-foam insulation, faced on the inside with plywood. The flooring is also plywood, picked by the designer to reinforce the do-it-yourself sense of the place as a whole. 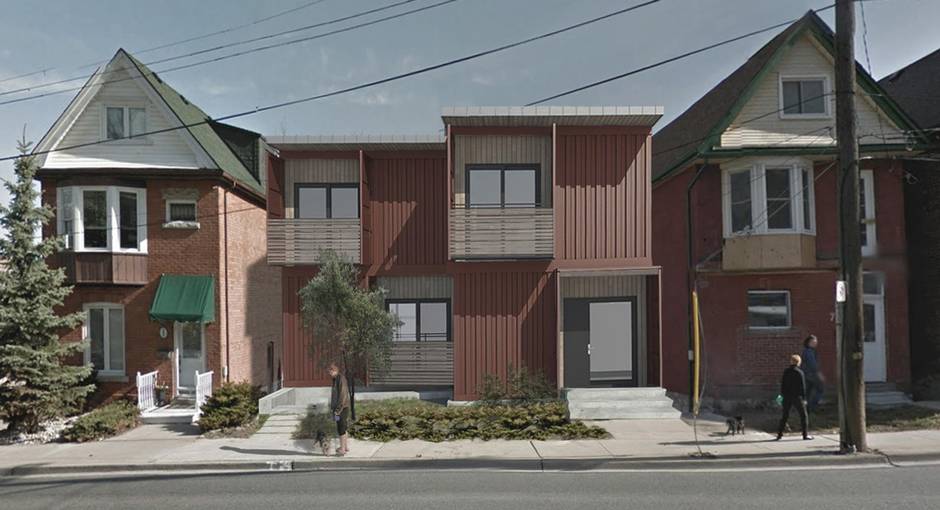 The shipping-containers home will be painted in a red brick colour to better blend with its Victorian neighbours. (Jason Halter and Brent Schmidt / Wonder Inc.)

If all goes according to plan, this house made of shipping containers will look as plain, muscular and industrial-strength as its components surely are. It will look inexpensive – but, in this respect, the casual observer could be misled. When people come shopping for container housing, Mr. Halter said, “they want an aesthetic, a lifestyle, and low cost. But it’s not necessarily cost-effective. If one has building experience, it’s possible to build economically. But you can’t put up a container house for $100 a square foot.”

While no cheaper than conventional new construction, however, container houses deliver dividends on the lifestyle side – if your idea of living well includes home-making in a prefabricated steel-sided compartment with a hip, here-today-gone-tomorrow feel about it.

“It’s extremely temporary,” Mr. Halter believes. “All architecture is temporary. No building looks good after 25 years.” Architects should be designing “weathering buildings that embrace the idea of dismantling, temporality.” So you tire of your container housing after a few years? “You just melt it down.”