Alex BozikovicArchitecture Critic
Special to The Globe and Mail
Published April 4, 2013 Updated May 11, 2018

Across the backyard, and past the kidney-shaped pool, is the hill: A rocky ridge juts upward to the sky, studded with the craggy roots and powerful trunks of some very old trees. It's a tremendous sight, even in winter, and one couple in the North York neighbourhood of Hoggs Hollow sees it from their back windows every day.

Happily, those windows are much bigger than they used to be. Toronto's Superkul architecture firm installed large glass doors as they renovated what used to be a staid Colonial-style 1960s house. The project, says Superkul's architect Andre D'Elia, was quite modest: To improve on a building that "wasn't being used very well," and make new connections to the landscape. This was a sensible approach: After all, what grand architectural statement could compete with this kind of vista?

Yet this house shows a subtle beauty of its own, thanks to Superkul's skillful touch. With very few changes to the form of the building, they've turned a forgettable, aging house into a modern and comfortable new home – with some surprises.

The owners' desire for a modest renovation made this possible. Right next door, you can see a case study of how the neighbours in this exclusive area are choosing to live: They tore down a 1960s house and replaced it with a stone-fronted quasi-chateau with seven gables. By contrast, "We know ourselves and we didn't need a really big house," says one of Superkul's clients, who is a doctor. He and his wife were expecting the first of their two kids, and, he says, the house's 2,500 square feet was more than adequate. "With a beautiful young child, you want to keep an eye on them," he says wryly.

Seeking a contemporary redesign, they Googled around and found Superkul. It was a good match: The firm has spent a decade building and renovating sophisticated houses in every situation Toronto has to offer, from a Kensington Market laneway to a leafy Rosedale lot.

In this case, Mr. D'Elia says, they were ready to take on a challenge. At one and a half storeys, with a hipped roof, bland finishes and an odd, cut-up floor plan, this house was a generic builder's house with historical pretensions and no historic value. "The hipped roof didn't scare us," says Mr. D'Elia. "We asked, 'How can we take advantage of all this?'" Indeed, Mr. D'Elia and his partner Meg Graham have learned about the pleasures of working with the constraints of renovation. "Sometimes you get quirky spaces," he says, "and they're spaces you wouldn't deliberately design. But you work with them and you can give them an interesting twist."

Twist No. 1: They joined the garage and the house, which had been separated by a small outdoor breezeway. The resulting space is a tightly proportioned mudroom. But where there used to be an exterior door, Superkul called for a massive new window that opens up views to the driveway and the street. Thus this little room – the first one you enter if you're coming from a car – surprises you. "They make great use of natural light and windows," the client says approvingly of Superkul.

Inside, the kitchen cabinets have been replaced with a Poggenpohl system. Floors of white oak extend through the dining area and living room, and two pieces of custom cabinetry – beautifully made of white oak by the mill workers KGA – provide discreet storage and texture. Here too are some important design choices: The architects demolished some interior walls to make this area entirely open, and then added two large floor-to-ceiling window openings and doors. This is where you can get a good look at the yard, a rock garden created by a previous owner and that rugged hillside beyond. Here, the architects removed a high bay window, replacing it with a simpler opening. The house's master bedroom was located on the main floor. Now that room has been converted into a home office, with more custom cabinetry in white oak.

Those cabinets are among the few signs of conspicuous consumption in the house. Another is the wine cellar in the basement – the husband of the house is a "reasonably serious" wine hobbyist, and his cellar got some handsome cabinetry to match the rest of the house.

However, most of the interior has been rearranged – a complex task, accomplished neatly by the builder Derek Nicholson. This is especially true upstairs. It's tough to summarize what was done here, but the math is compelling: There were three bedrooms and a bathroom, and they all remain, but there is also a large walk-in closet and a second bathroom. This was accomplished partly through an efficient floor plan and partly through found space by knocking open interior walls and going into the eaves. There was a lot of room there, which has been used to expand a bathroom and add storage. Plus, the main hallway here is now opened up to the roof line – making for a six-foot-wide grand corridor with a couple of skylights. One day the kids will have desks here, the owner says; for now it's a bonus, a quirk that pays off in space and light.

Other houses on the street are changing hands, and the owner guesses that they're destined for tear-downs. But maybe new buyers will notice this newly handsome house, with its yellow brick, sober grey siding, tailored aluminum windows, and wonder whether it might be better to do something more modest. "We could have built a house that was much larger, like the one next door," the owner says. "But it's much more beautiful just to look at an amazing landscape."

Childcare centre a masterful mix of steel, glass and aromatic wood
May 11, 2018 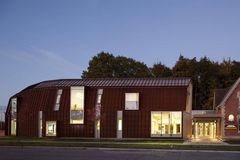 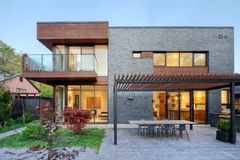 Cottage industry: Architect’s stripped down approach to a lakeside retreat
May 11, 2018 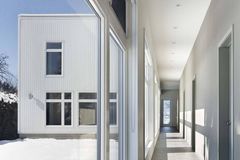