You have to wonder sometimes where carriage-trade interior decorators get their awful notions.

The thought occurred to me (not for the first time since I’ve been writing this column) during a recent visit to a beautifully overhauled townhouse in Toronto’s exclusive Deer Park neighbourhood. I went in the company of architect Ian MacDonald, who had done the renovation for the unit’s current owners, two down-sizers from Moore Park. Toward the end of our conversation, Mr. MacDonald showed me photographs of what the place looked like in the era of its previous owners – before, that is, he got his hands on the place.

He didn’t say a critical word. He didn’t need to. The photos spoke eloquently about the tsunami of expensive bad ideas that a designer had unleashed on the home in its former incarnation. A sentimental, rhapsodic staircase wound its way up a cramped stairwell, past expanses of wallpaper hectic enough to induce the heebie-jeebies. Pseudo-antiquery and swags prevailed.

The decorative appointments, however, weren’t the only things wrong with the structure. 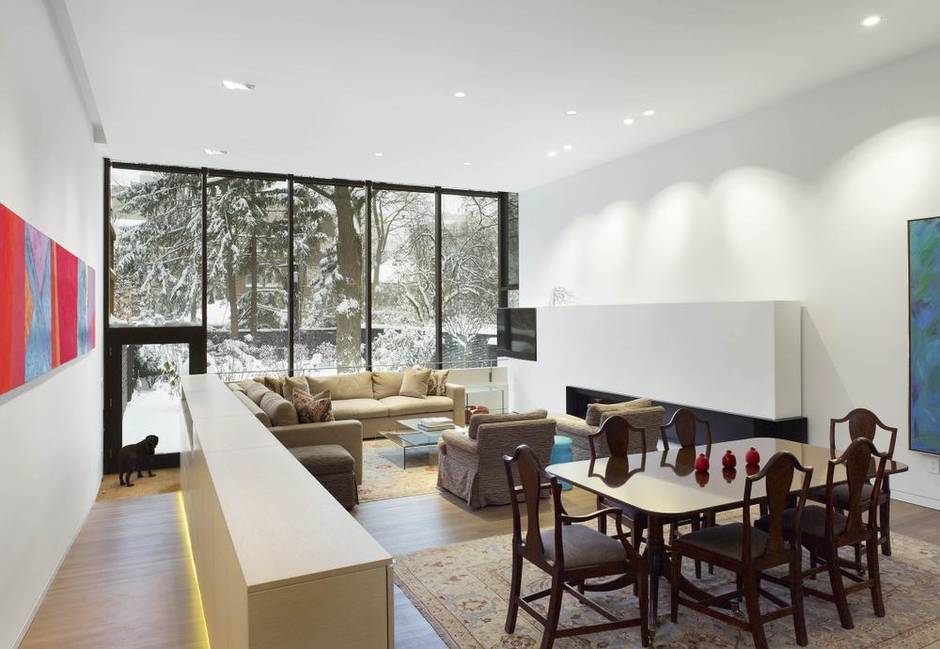 All photos by Tom Arban 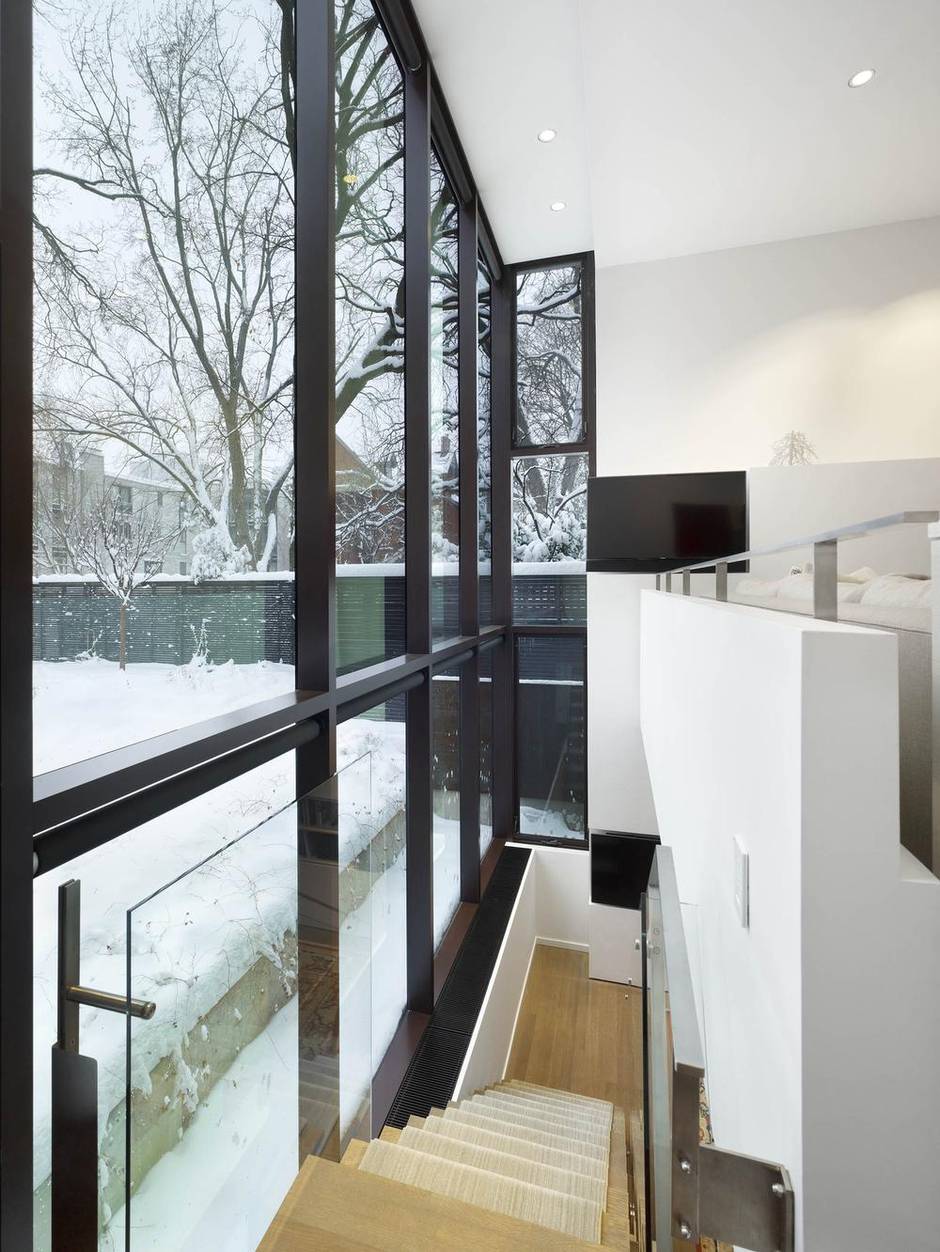 Built in the 1970s, when architects should have known better, the 22.5-foot-wide building was walled off from its spacious rear garden by a kitchen with a little window, and with only a mean door to the outside. To beef up the gross square footage of the house, the original developer had made a so-called “ground floor” out of what was really the basement, which had the effect of raising the living room floor too high above the garden. The entire arrangement of interior space, in other words, was awkward and off.

So it was that Mr. MacDonald decided to rework the inside almost completely from scratch. (He kept the central light-well, one of the few interesting features in the clunky original scheme.)

The bottom level has been sunk, turning it into a proper basement and making the living-dining area above it more open, airy. A neat, elegantly modern wooden staircase, crowned by the large skylight, provides vertical circulation among the three upper levels of the house, whose total area, including the basement, is 4,500 square feet. The kitchen has been moved from the back to the middle, to catch the sunlight filtering down from high overhead, and the kitchen’s place at the rear has been taken by an ensemble of casual, contemporary couches and chairs. This living-room setting overlooks the landscaped shade garden, which has become visible since the replacement of the opaque back wall with a transparent curtain of high-performance glass. 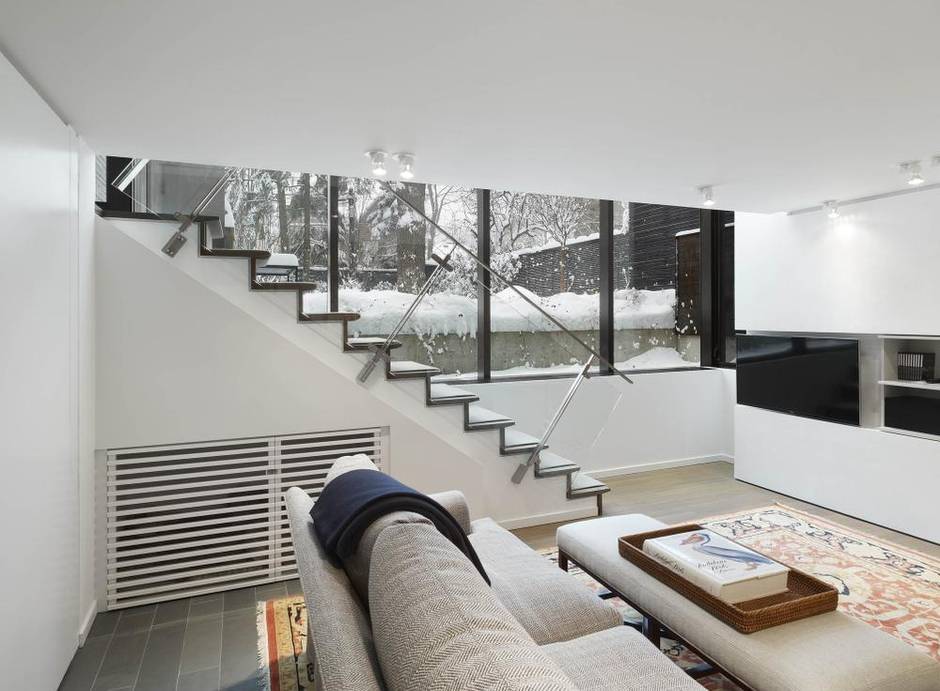 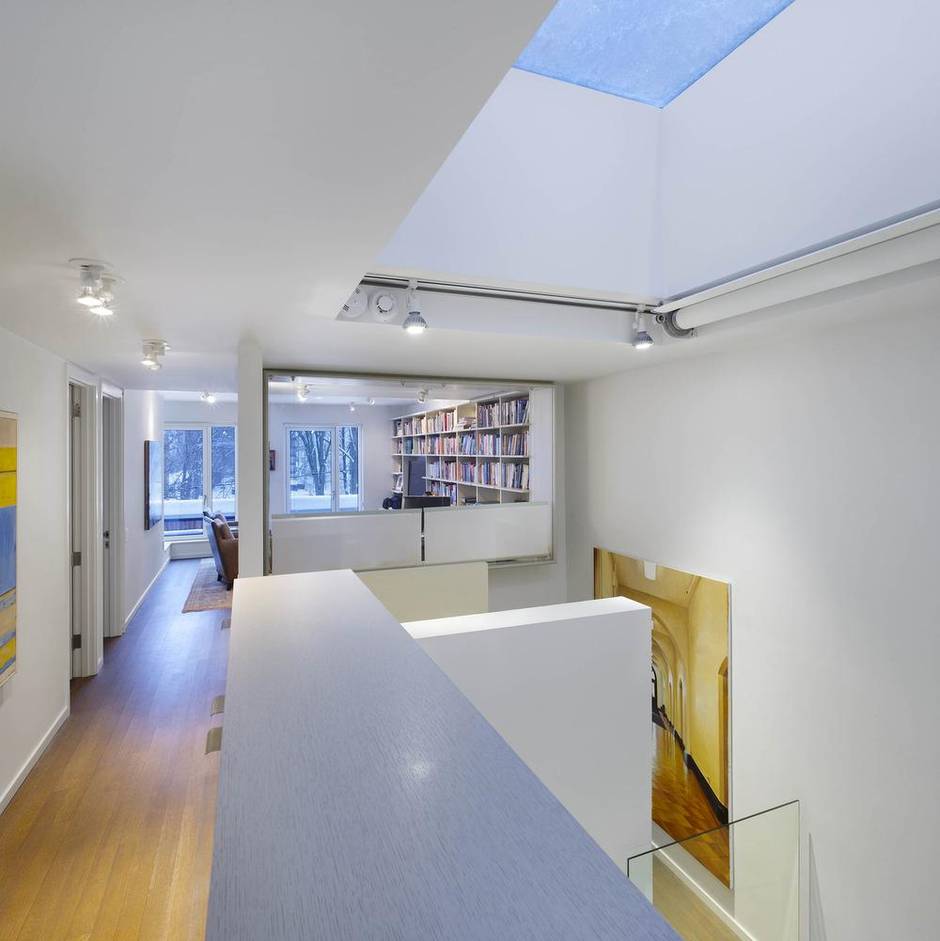 The clients intend to live out their days here so much has been done to make the environment simple to navigate. There is an elevator, although so deftly stitched into the house’s fabric that a stranger would hardly know it exists. An interior ramp connects the main floor to the deck outside, and another ramp leads down (almost) to the garden floor. (The garden ramp can easily be extended the full way, should the need arise.)

The moments of darkness in the scheme – the firebox and large television screen in the living room, the dark steel framework of the curtain wall at the rear, the old-fashioned dining table imported by the owners from their former, traditional dwelling – call attention to just how white or pale almost everything else is, from walls and ceilings to kitchen counter-tops and the white-oak flooring.

Indeed, this pervasive lightness might be too much of a good thing, were it not punctuated everywhere by the owners’ vivid pictures. Their collection of paintings, most of them by contemporary or modern Canadian artists, embraces both abstraction and expressive figuration – none of it particularly radical, all of it aesthetically attractive and lively, and solidly mainstream.

Museums and picture books have done a good job of convincing the art-buying public that such modernist painting is best displayed on white walls. It’s not always so, however, and collectors should be encouraged to experiment with different backgrounds – but art of the kind assembled by Mr. MacDonald’s clients is well served by its hanging on his broad white surfaces. 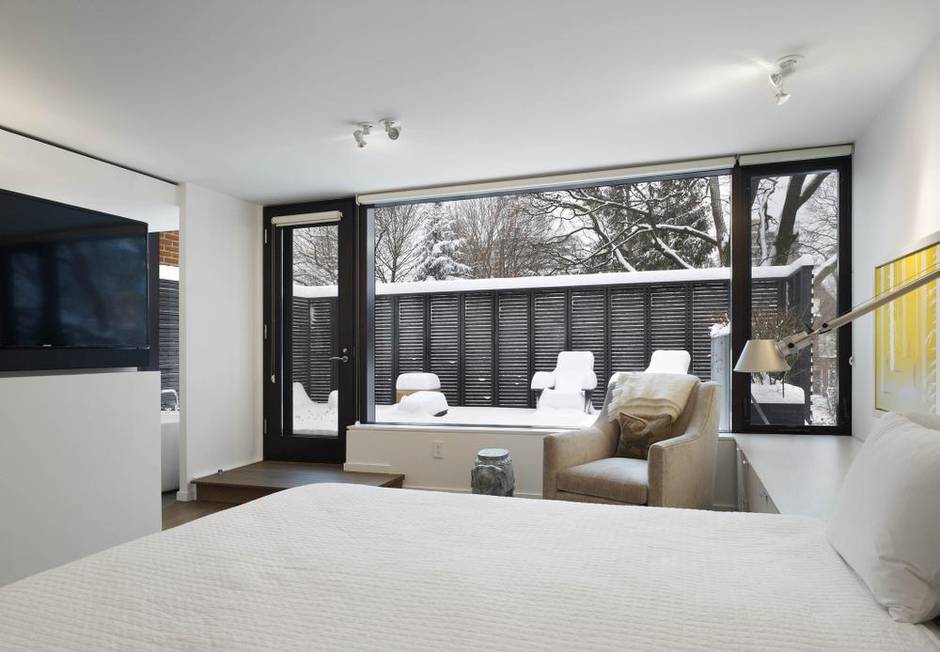 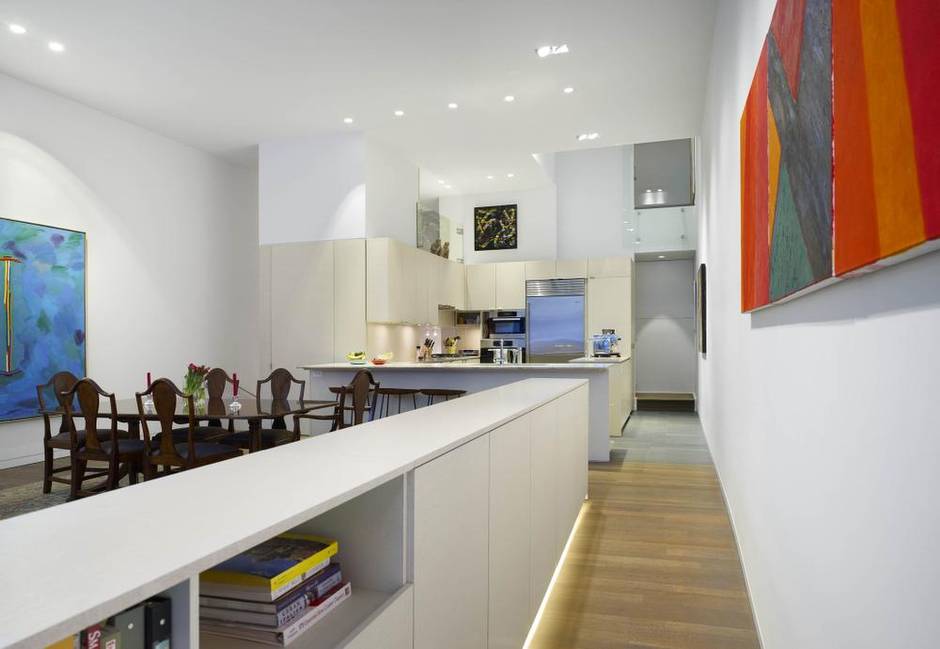 Like other residential interiors by Mr. MacDonald I’ve seen, this one is distinguished from the ordinary by intelligent, spare geometries, long and carefully thought-out sight lines, and by the odd surprise.

It’s hardly unusual to find a fireplace and a television set in the living room of a luxury home, for instance, the two fixtures often competing for centre stage. But they are rarely as sleekly knitted into the material fabric of the space as they are here. The fire-box and screen, icons of domesticity old and new, become black elements set with care in a boldly defined, white-plastered, boxy composition 18 feet long.

Like the renovation as a whole, this handsome black-and-white feature has about it the sense conveyed by certain minimal sculptures – an air of chic but serious tailoring, of winsome and not at all starchy formality, of welcome stillness. It embodies the strong abstract visual economy that has long been typical of Mr. MacDonald’s work, and, judging from this Deer Park renewal, continues to be.