Every year, Canada’s National Trust publishes a “Worst Losses” list – a heartbreaking enumeration of historic buildings wiped from our landscape. From lighthouses to churches to architecturally and culturally significant houses, most are neglected beyond repair, then demolished – often for condo development. And as the only G7 country without laws in place to protect federal-government-owned historic properties, Canada continues to accumulate new losses every year.

But many independent restaurateurs are willing to give old structures a new lease on life. And their restaurants, many of which are in buildings that sat empty for decades or were slated for demolition, have become some of the most alluring places to eat. When a restaurant owner takes on a building of historical interest, members of the public can enjoy that unique space for the price of dinner or drinks.

While the partners considered other locations, the unique character of their historic new digs was the deciding factor – it inspired a deeper commitment. 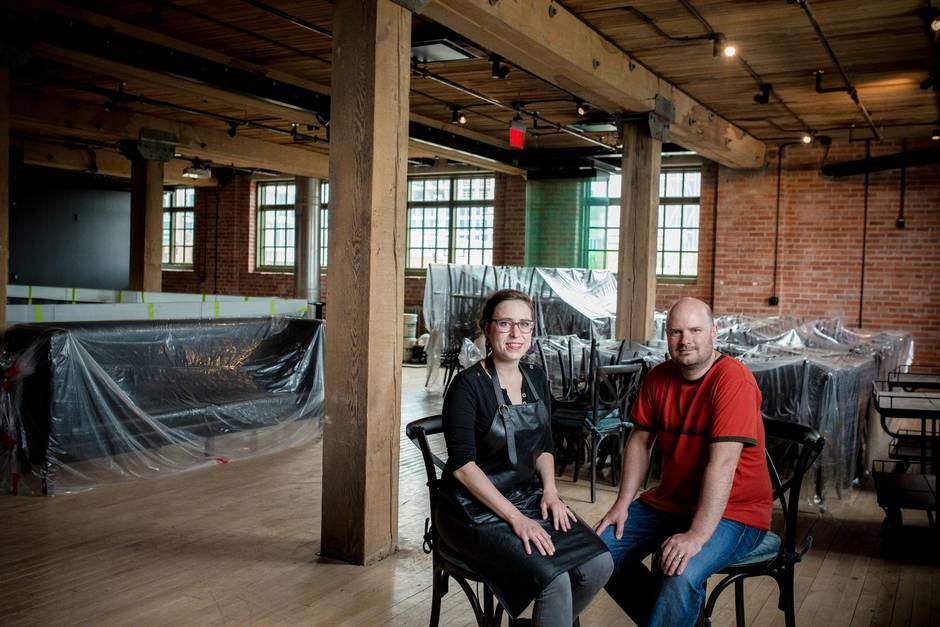 In Calgary, executive chef Jessica Pelland and co-owner John Jackson sit in Charbar. (Chris Bolin For the Globe and Mail)

“This is a forever thing to us,” says John Jackson, a co-owner of Charbar, an Argentine-inspired grilling restaurant. “We want our kids to be a part of it in years to come – there’s no other building like this in Calgary.”

The restoration was a collaboration between Calgary Municipal Land Corporation (CMLC) and the new tenants, who beat out more than 100 other applicants for the space.

“From the earliest discussions they were very engaged with what we were trying to create: a hyperlocal community where each one of our businesses was feeding off what the other ones do best,” says Jackson.

The three food-and-drink enterprises are committed to farm-to-table principles, such as knowing one’s producers and being able to tell customers where the flour in their pastries came from. Being able to share the story behind each pillar and beam in their new space seems like the next logical step in catering to a locavore clientele with socially conscious sensibilities.

The hospitality partners worked, in accordance with CLMC restoration guidelines, with architecture and design firm McKinley Burkart to create distinctive looks for each business. “It would’ve been cheaper to build a whole new building than restore this one, but we think what we’re creating here outweighs these costs,” says Jackson.

Every original feature tells a story. The giant chute above the private dining room, for example, was once an entry point for pillow feathers into the cavernous former storage space. While key elements such as the Simmons sign on the brick façade and 36 solid-fir pillars have been preserved, contemporary touches have been introduced, such as a glass elevator and rooftop patio. A shared wraparound bar means the roastery can serve postmeal espressos to Charbar diners and the restaurant can offer boozy nightcaps to Phil and Sebastian patrons.

“We’re not trying to duplicate the past or make the space an old museum – we’re reactivating the space,” says Jackson.

In Toronto, another restaurateur recently lured by a heritage property is Aras Azadian, who opened Barsa Taberna with his business partners in May, 2014. Azadian had been looking for a much bigger site for his first restaurant than the 3,000-square-foot vacant space he fell in love with near the St. Lawrence Market. 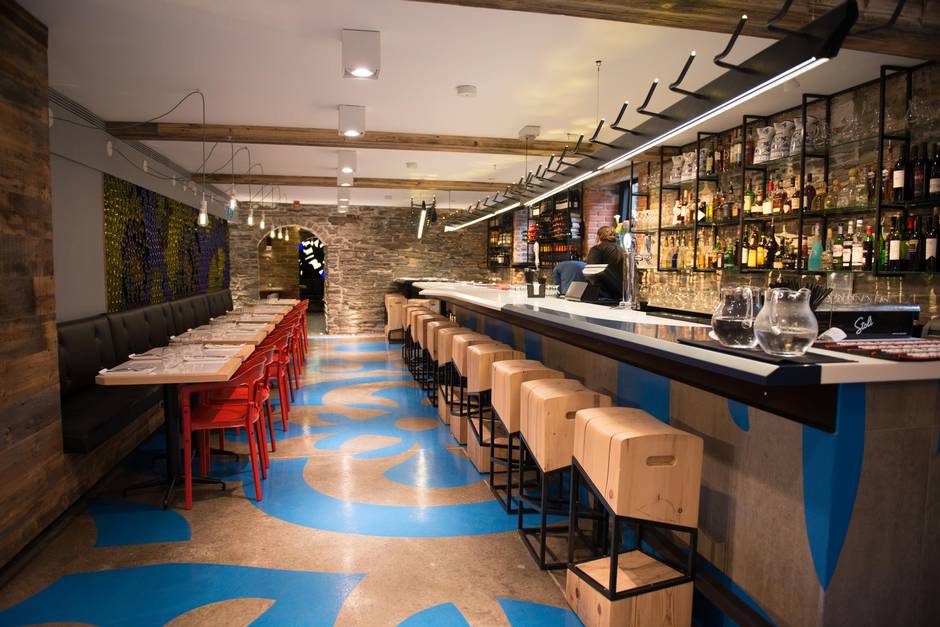 In Toronto, Barsa Taberna was once an RCMP stable.(Danielle Blancher)

After serving as an RCMP stable, then a wine warehouse, the property sat empty for two decades. Azadian followed his heart and signed the lease, seeing tremendous potential in its “disorganized and disproportional” masonry and heavy beams.

But the course of true love never did run smooth. Azadian anticipated spending four months on renovations to transform the heritage space into a Barcelona-inspired tapas restaurant. The launch finally happened after 11 months of surprises. “We kept having to put new announcement posters in the window,” he says, “and neighbours would come by and ask: ‘Are you guys ever actually going to open?’” Azadian explains: “We were dealing with 2014 building code and an 1800s building. Even just to get the electrics right, we ended up with 17 drawings.”

Barsa Taberna is one of six restaurants on the cobbled street owned by Woodcliffe developers, who had a vision for a row of eateries. The +tongtong-designed interior, with its original doors and windows and exposed-stone walls, now has a Gaudi-inspired tiled floor, back-lit bullfight-inspired mural and a mosaic created from 1,500 coloured-glass wine bottles.

“There’s always this moment when people walk in the front door for the first time and look around them and say, ‘Whoa!’ That’s what I love,” says Azadian.

Barsa Taberna is below street level on a short, off-the-beaten-path block, which reduces the chance of walk-ins, yet Azadian reports a strong first year: “Our opening night was fully booked, and we’ve had consistent weekend traffic from Day 1, even though Toronto just had the coldest winter on record.”

Restaurateurs are inherently suited to rising to the challenges of historic buildings, according to Todd Perrin, chef and co-owner of Mallard Cottage – a restaurant housed in an 18th-century Irish-Newfoundland vernacular-style wooden fisher’s cottage in St. John’s. “People interested in getting into the restaurant business are already not risk-adverse.”

In December, 2011, after years of admiring Mallard Cottage, back when it was a stuffed-to-the-gills antique store, Perrin, his wife, Kim Doyle, and sommelier Stephen Lee bought the property. It took two years – without generating revenue – to ready the place for its launch as a regionally focused restaurant, with the help of restoration specialists Sweet Lumber Enterprises. 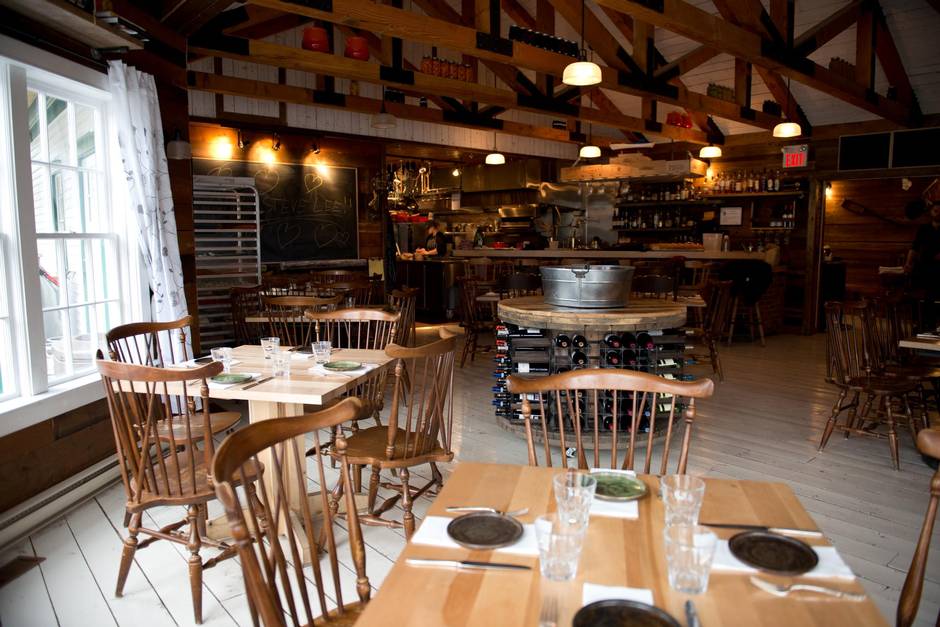 “The place was pretty dilapidated,” Perrin says. “We saved the bones, but had to take up all the floors and replace most of the exterior and the roof.” Today, the building combines traditional furnishings and a big fireplace with a modern, open-concept kitchen. There are chef gardens, chicken coops and facilities for smoking [meats] and grilling out back. “There’s nothing quite like working somewhere with as much personality as you and your staff,” says Perrin.

While the city of St. John’s didn’t offer financial support, it did offer restoration advice and leeway with development rules, such as allowing extra parking spaces. Perrin and his partners took almost seven months just to secure funds for a 12-month restoration. “Financing restaurants is already extremely difficult, but try financing a restaurant in a heritage building, when you’re likely going to multiply the costs by about 10.”

Perrin believes that in spite of the higher startup costs, the uniqueness of a historic building gives his restaurant a competitive edge. “It’s smart business in a way – people come to Mallard Cottage as much for the building as for the food and cocktails.”

During quiet moments of checking e-mails over coffee – before the staff and diners arrive – Perrin will often put down his mug and have a moment. “I’ll look around and say, ‘Wow, that’s what we did.’”

It’s a satisfaction bigger than that of creating a viable business in the restaurant industry – a feat in its own right. “We took an important heritage building near the end of its life, and we gave it a new one,” says Perrin. “And even if our restaurant fails next week, we’ll always have saved that building.”