In August, this space featured a 1960s apartment tower in the running for a 2015 Heritage Toronto William Greer Architectural Conservation and Craftsmanship Award. Today, a second candidate is presented below; in early October, we will present a third. Winners will be announced on Oct. 13 at the Heritage Toronto Awards gala.

Fifteen years ago, Toronto’s Corktown neighbourhood was a destination only to those who lived there. Many buildings were dilapidated, a few were vacant, and alleyways were littered with syringes and condoms. Shady characters on doorsteps steered nice folk into taking evening constitutionals elsewhere; besides, Corktown coffee came only in the lukewarm, greasy spoon variety.

But, as with most pockets of this booming city, gentrification soon came a-calling. However, because of Corktown’s physical makeup – much of it sits in the shadow of the Richmond Sreet overpass, and many streets are narrow culs-de-sac – and because authentic grit is so deeply rooted here, a quirky honesty remains rather than the crass commercialism that usually strangles a neighbourhood. 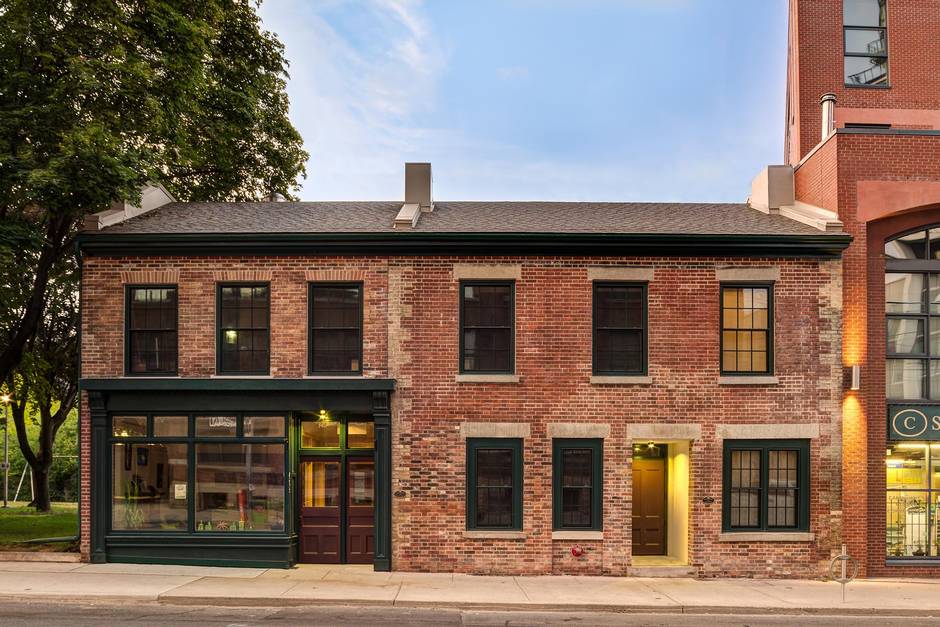 The Francis Beale Buildings, after restoration by DTAH. (Photo by Arnaud Marthouret)

“There’s a heritage conservation district coming in this area,” says architect Joe Lobko, a partner at DTAH, a firm known for sensitivity to heritage buildings and stunning landscape architecture.

An HCD, of course, will help mitigate the dreaded G-word and encourage other building owners to follow in the footsteps of Little Trinity Anglican Church, an organization that recently cut the ribbon on a full restoration of two commercial/residential Georgian buildings at the corner of King and Parliament streets.

“It used to end with [the store] Up Country, that was the end of civilization,” says lawyer John van Gent, who chaired the church committee that hired DTAH to oversee the project. “And now, you get over the bridge and you continue along Queen.” He points to fancy retailers in the restored building across the street at 334 King St. E. “This wasn’t here when we started the project, and none of the Streetcar Development [condo] buildings were done yet.”

It’s true. And, while demure, Little Trinity’s handsome townhouse duo adds big punch to this corner and, indeed, to the built history of this once working-class Irish neighbourhood.

While the original architect or architects of the pre-Confederation Francis Beale Buildings (as they were known) are unknown, the church has owned the semi-detached pair at Nos. 399–403 since the early 1900s. Up until the 1980s, they were “rented out … to shopkeepers and residents,” according to a 2011 City of Toronto report. Unfortunately, after that they were boarded up and left to fight the elements; Mr. van Gent says the church was “embarrassed” about that, “but there just wasn’t any money.” 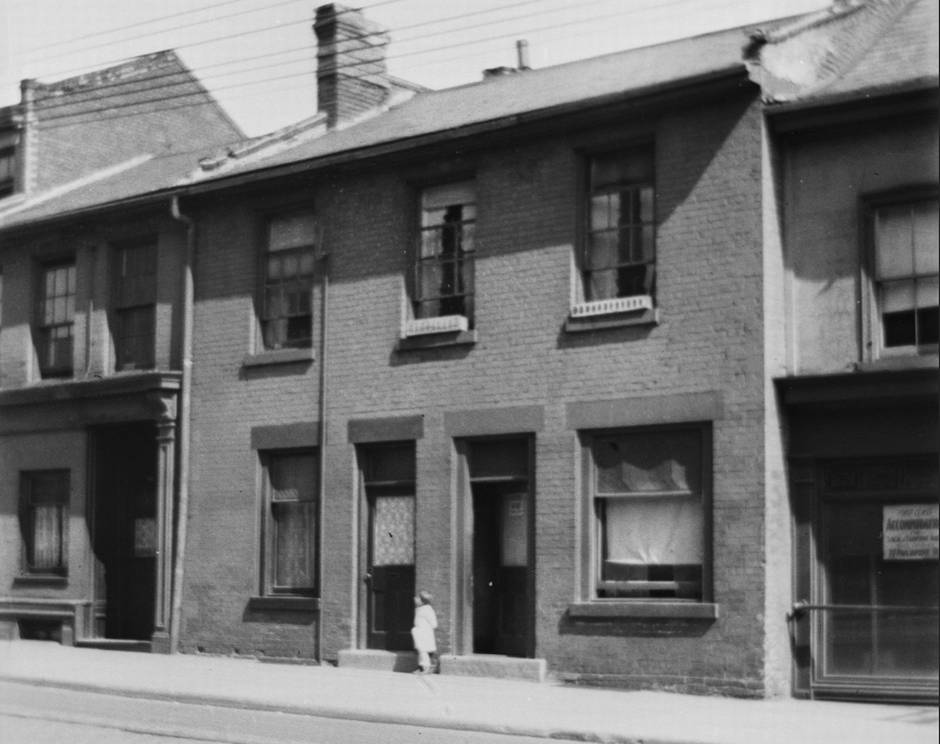 Early plans called for demolition and construction of affordable housing with a partner, but as the West Don Lands started to fill up with residential buildings (including 243 affordable housing units), the need for community services – with retention of the heritage buildings – seemed more logical.

So, the congregation began deliberating. An early rendering showed a large, new building behind the Georgians containing offices, lounges, a gym and a dining hall, among other things: “We threw it all in and said: ‘It’s eight million,’” Mr. van Gent recalls of the cost. That plan would also eat up the entire backyard.

Deemed impossible, a more realistic design that lacked the gym and large hall but contained community meeting spaces, a commercial kitchen, shower facilities for the homeless, offices and a youth lounge came in at a more realistic $5-million. The new plan also retained the backyard – which connects visually to the park next door – and included a massive renovation of the church basement. 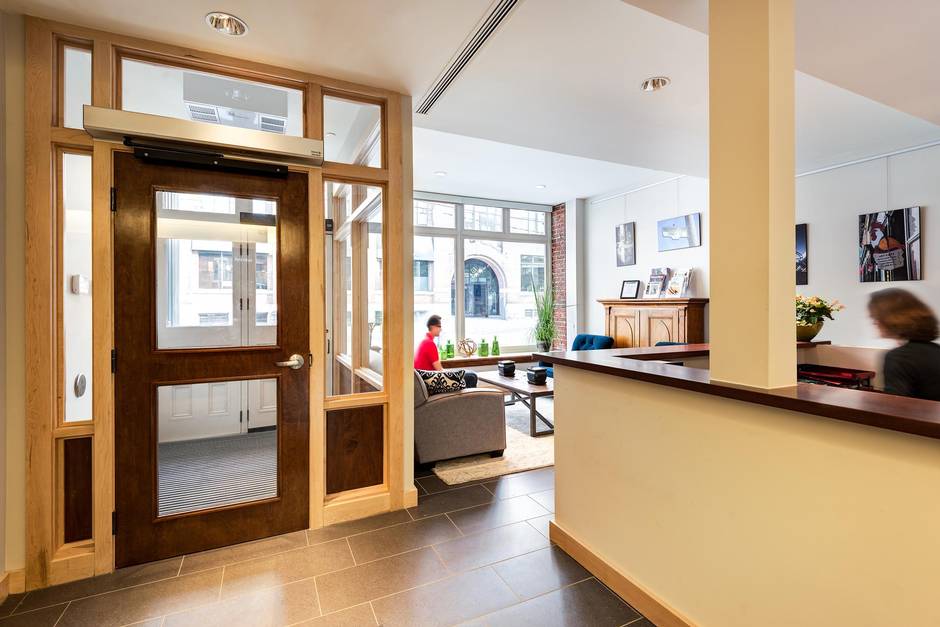 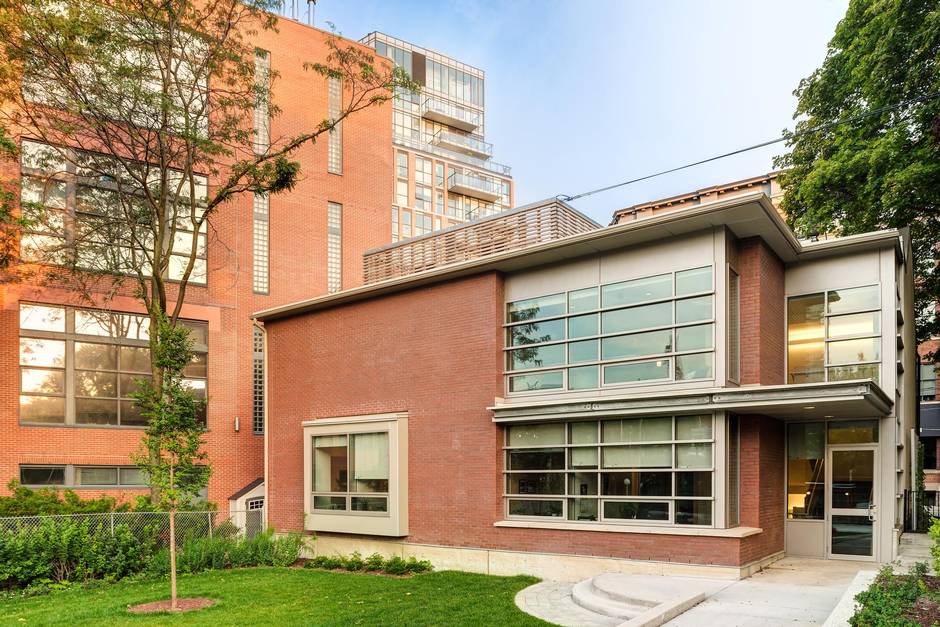 What did not impress was the structural condition of the townhouses. While the brick façades showed promise, the spaces behind them were “very dangerous to walk in,” Mr. Lobko says. In fact, since the exterior wall to the east had originally been an interior wall (the row of townhouses had continued), it displayed considerable spalling and weakness. Vandals and animals had done their bit as well, so nothing was salvageable save for some brick.

“So what we evolved, collectively, was the idea of a new building emerging out of the façade of the old … so you kept the gable in the front, and a flat roof back there.”

When it came time to restore the heritage façades, which had been “painted and glued together” over the decades, a treat awaited the team, Mr. Lobko says. “Edwin Rouse from ERA [Architects], who also worked with us, called me and said: ‘There’s a whole thing here, there’s a whole storefront left,’ which he then helped us figure out how to restore.”

Once partly filled in with brick, big windows trimmed by wooden cornices and pilasters now announce the new “Little Trinity Annex” to the neighbourhood. “This was a lovely storefront in its day,” Mr. Lobko says, “and they did a nice job way back, because a lot of the Georgian townhouses were pretty straightforward.”

It’s a nice fit for the church, too, Mr. van Gent adds. “With the community changing the way it was, we wanted a storefront to show what the church is doing.”

Open the door, however, and there’s much more than a friendly greeting and information about outreach programs: With Little Trinity’s renewed commitment to Corktown history, there’s the warm feeling that this crossroads will remain forever quirky despite the arrival of condo towers and a good cup of coffee.