Blame it on the belvedere.

That architectural feature, says conservator Alan Stacey, is what hooked him into taking on the task of restoring some of the bits and bobs of Alderlea, an 1865 Italianate mansion in Brampton, Ont.

"I borrowed a stepladder off somebody, hoisted myself up to the roof rafters, and got up to the belvedere," remembers the affable Englishman.

There, despite "treading on an inch of pigeon poo," the beautiful view of Gage Park spread out below was no match to the "virgin room" – complete with "original graffiti" by children who grew up in the home – that caused his heart to beat faster.

He knew then that his firm, Heritage Mill, based in Dundas, Ont., had to get involved.

"You just don't get that type of history," he says, beaming. "That room up there has never been touched, it's never been repainted."

Unfortunately, much of the 7000-square-foot house below the tiny rooftop structure had been touched … a great deal.

Built for Kenneth Chisholm, son-in-law of one of Brampton's founders, John Elliott (who changed the name from Buffy's Corners), and then owned by the Salvation Army's first official Canadian leader, Thomas Bales Coombs, Alderlea (or Alder Lea) eventually became the headquarters of the Royal Canadian Legion.

At some point between 1946 and 1948 (accounts vary), the Legion attached a large, boxy, two-storey addition to the south façade, which resulted in the loss of many decorative features, including dozens of ornate roof brackets.

It's these brackets, plus windows, wood mouldings, and "wavy board" below the fascia that have consumed Mr. Stacey since he and his half-dozen employees started work here in August, 2011.

The mansion had been a hive of activity long before that. Purchased by the city in late 2002, consultants, masonry contractors, plasterers, electricians and plumbers have been swarming over every detail, all under the queen-bee leadership of heritage specialists Taylor Hazell Architects.

A walk around the home's exterior with Mr. Stacey is a dizzying affair. Pointing to original soffit and fascia boards of unequal widths, he explains that his crew, upon reproducing the dozens that needed to be replaced due to age and rot, followed a similar haphazard model; since their work is kiln-dried and won't shift, they've also added gaps between the new boards to mimic the originals.

In recreating the wavy board – which was hand-drawn and therefore also imperfect – sheets of Plexiglas were brought up to existing examples, traced, and then templates were made.

He remembers how cool it looked when the new roof brackets were "lined up like soldiers" on the ground waiting to be hoisted up, and that so many of the windows were "out of square" before they got their hands and tools on them.

Inside, doors have been recreated, including the home's impressive front door, which was removed by the Legion, as well as lengths and lengths of wall trim, which had been hacked off willy-nilly to add partition walls, shelves and other assorted "modernizations" (of course it should be noted that without service clubs, religious orders or universities, most of these grand mansions wouldn't have survived into the 21st century at all).

To recreate these trim items, new "cutters" had to be made to match the old profiles: "For this building we ground 31 or 32 cutters," he says. "The longest [piece of trim made] was maybe 60 or 70 linear feet, the shortest run was about three [feet]," he laughs.

"Hands-and-knees" jobs were tackled also. In the home's more opulent 1879 addition are beautiful plaster moldings on ceilings and columns (much uncovered under drywall and a drop ceiling) and, on the base of those columns, intricate wood turnings that cap each corner. However, since these weren't made by machine, each one is slightly different, meaning all restoration/replacement was done the old-fashioned way: by hand, crouching down.

So many details, and a story behind each one! "Tell me if I'm boring you," says Mr. Stacey, "because I do lose people sometimes."

It's anything but boring peeking into this specialized world of "Dutchman" (the repair, not the people), waterproof epoxies, reclaimed windowpanes, first-growth wood and ogee curves. It's a place where glass has a "hierarchy" because of cost: The ground floor would get the "status" pieces of clean glass, but as one moved up the building, cheaper and cheaper stuff would be installed until, as is the case with Mr. Stacey's beloved belvedere, panes are pockmarked, bubbled and ridged … which contemporary eyes find quite lovely.

"We're immensely proud of the job," says Mr. Stacey, who began his journey over three decades ago in London, England, restoring everything from works of art and period furniture to model ships. "It's rare that you can be in a career that you can come back in 30 years time with the grandchildren and say, 'We worked on that, we did that bit, we had this problem here,' and so on."

Blame that breadth of view on Brampton.

Builder seeks an accommodation with an historic Toronto street
April 4, 2013 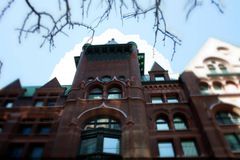 These Ottawa homeowners live the rewards of restoration
March 21, 2013 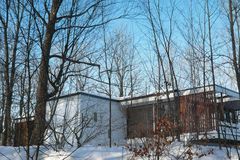 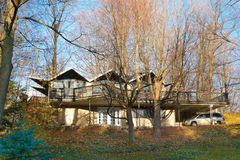