It has been four years since Toronto's Urban Capital Property Group rolled out the 950-unit residential complex known as River City. From that time to this, lead designers Gilles Saucier and André Perrotte, partners in the Montreal firm of Saucier + Perrotte, have been handing Hogtown one surprise after another.

The first was the 14-storey building that stands at the north end of the project's long rectangular site in once-desolate brownfields beside the Don River. Contradicting almost every expectation of what a Toronto condo ensemble should look like, River City 1 is dark, retiring, instead of shiny and glassy. It is laid out on an irregular pentagonal plan and is slope-sided, instead of being shaped like a cereal box or milk jug, or some variation thereon. Mr. Saucier calls it "a black art object, something with materiality that will look very strong and expressive on the site."

The second surprise was the office's proposal for the next phase. In contrast to the black structure it stands beside, this group of sculpted, linked blocks is white and gleaming. "We wanted to express the idea of light, reflection, living in the open landscape, without any skin covering it," Mr. Saucier told me. "Each apartment is the expression of individuality …. Each is a living element you pile up to create complexity."

But the story so far of River City – dark, reserved phase one followed by bright and punchy phase two – had not quite prepared us for the most vivid surprise of all: the 28-storey tower of phase three, which will go up immediately south of the elevated roadway that cuts across the site and flies over the Don River. If a rendering can be believed, Saucier + Perrotte's mid-sized building will be among the most artistically exciting high-rises constructed in Toronto since the onset of the condo boom.

Viewed from a point south of both flyover and tower, somewhere in the new adjacent park – the handiwork of Waterfront Toronto, the public agency developing this part of the West Don Lands – River City 3 will appear to be a black, heavily corroded oblong standing tall in the midst of lower housing round about. This side of the building will be dark and assertive, like the first phase of River City.

And its textured façade will reflect and freshly interpret the long-standing interest of Mr. Saucier and Mr. Perrotte in the effects of wind and water on stone, and in the natural forces that sculpt the earth, creating places and landscapes from the raw stuff of geology.

Moving around the structure to its north side, however, the observer will find that something bold and remarkable has happened to the black monolith. Light-framed residential units that seemed (from the other side) to be neatly stacked up, one atop the other in an orderly, conventional manner, come loose high up on the tower wall. They thrust out and pull in irregularly, as if they are small drawers opening and shutting in a tall bureau.

But toward the bottom of the façade, the drawers explode from the north side of the chest, pushing toward the highway and the earlier phases of River City, gouging into space far beyond the limits of the monolith's central shaft.

The result of all this visual commotion, with its eroding and pushing and pulling, should be a building with appealing vivacity. Like Beijing architect Yansong Ma's curvaceous Absolute towers in Mississauga, River City 3 expands the meaning of the apartment block as an urban architectural type, and encourages a fresh design direction for architects and developers working in the local real-estate market.

As should be clear from River City 3 and some other residential projects I've noticed around the city recently – including Saucier + Perrotte's Thompson Residences, nearing completion on King Street West – the leading-edge notion in residential block design at the moment is the breakup of the slab and box. Rather than merely piling up identical units neatly, one exactly on top of another, some architects are breaking out individual apartments from the sober-sided framework of the typical modern building. Each suite that gets this treatment stands out from all the others in the stack. It acquires its own visual identity, a unique address.

The idea is not new: Moshe Safdie led the way decades ago, by strongly articulating units of housing in Habitat, which he fashioned for Montreal's Expo 67. But, if all goes according to plan, River City 3 will mark a notable translation of the strategy from mid-rise to high-rise conditions. Like every other huge agglomeration of people that is officially trying not to sprawl, Toronto needs high-density residences to shelter its multitudes. The outstanding architecture of River City shows that even massive urban housing schemes can celebrate and express the individuality everyone needs in order to survive the big-city pressure to become bland, packaged, generic.

Architect offers a new take on preserving the old
May 1, 2014 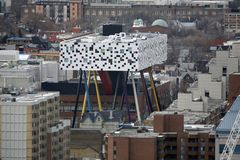 Country modern: Architectural poetry in the land of siding
April 24, 2014 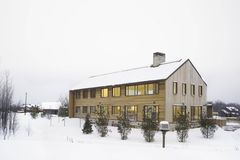