Alex BozikovicArchitecture Critic
Special to The Globe and Mail
Published September 12, 2013 Updated May 11, 2018

Modernist houses have always paid attention to the outdoors. It's a cliché for contemporary designers to talk about "bringing the outside in" with large windows and glass doors, an idea that would have been familiar to Le Corbusier in the 1920s. But what about the yard itself? In Toronto, it's unusual to see designers and homeowners pay as much attention to what's going on outside.

For one house in Rosedale, the young architect Michael Amantea turned his attention to the yard, to great effect. He rebuilt the house's garage and backyard landscape into a sophisticated composition in cedar, sandstone, ipe wood and black-stained wood fences, topped with a lush green roof.

"It's a small project, but I saw it as an opportunity," says Mr. Amantea. "It was a chance to do something small but very careful."

The opportunity and the challenge, back in 2011, came with the location: a grand Victorian house on a tight corner lot in south Rosedale. The owners, Mamta and Kishore Pranjivan, had two goals: to control views from the street into their yard, "while retaining views to the beautiful park-like quality of Rosedale," as Mr. Amantea puts it. "And of course they needed somewhere to park their car, without spoiling the quality of the place."

Given their contemporary tastes, the choice of Mr. Amantea made sense; he launched his own practice last year after a decade working for the architecture offices of Hariri Pontarini and Ian MacDonald. The Pranjivans had already done a contemporary interior renovation. (They still live there now, but are leasing the house as they prepare to move out of the country for three years.) They wanted a contemporary design for the garage and yard, and had to fight for it. Mr. Amantea delivered.

In the east-facing backyard, there was a pool and a large silver maple tree. Beyond them was an aging garage, with its driveway leading south to a side street. Mr. Amantea kept this arrangement, but he's refined it with an architect's sensibility. Now, a fence wraps the side of the yard with horizontal slats of wood, stained black. The slats continue right across the façade of the new garage, where a wall of glass panels sits tight behind them. A large overhang, with a bottom face of warm, honey-stained cedar, protrudes over the fence to shelter part of the backyard.

The outside detailing of the fence and garage were controversial with the neighbours and with Toronto's heritage department, who pushed for the garage to have a pitched roof in keeping with the Victorian design of the house. Mr. Amantea and his clients – rightly – argued that this made no sense; for one thing, there are flat-roofed 20th-century garages right across the street to the south, in plain sight. (The street has an unusual quality; it has both garages and houses fronting on it.) "To me, that argument didn't make sense," Mr. Amantea says. "The historic home is the object. The garage is a frame for views and experiences of the garden."

Mr. Amantea designed the garage as a flat-roofed structure, as low and compact as possible. The inside of the garage is detailed very elegantly in Douglas fir plywood, with storage cabinets hanging out to the sides and (just) room for two cars. Mr. Amantea argues that it's worth the trouble: This, after all, is where the owners come through most often, the real threshold of the house. He's right. But in any case, the outer walls and even the roof of the garage help to attractively define the outdoor space between the Pranjivans' house and the neighbours'.

On its west side, the garage does double duty as a visual extension of the yard. Its glass wall, covered by the fence slats, is lit from inside at night, producing a shimmering, mysterious half-image. This adds to the ambience of the yard, which also has strategically placed lights around the fence. In daylight, the yard reveals itself as fairly simple. Thick sandstone pavers line the poolside; the pool itself is lined with black porcelain tile, picking up on the hue of the fence; and around the pool are panels of plantings, with small trees, ipe decking, and rectangles of white gravel.

The fence itself – built like the rest of the project by Coivit Contracting – is considered and built to a high degree of detail. Its horizontal slats are staggered, so that you can't clearly see in from the outside; it has custom-made gate hardware; and it follows a complex course, concealing a storage shed for bins and two more sheds for pool equipment. It's rare to have a talented architect or landscape architect devote so much energy to designing such things, and it pays off. Some of the neighbours' yards feel cluttered and smaller than they are. Here, the valuable real estate is polished to its highest lustre.

All this reflects a certain specifically Torontonian tradition. Mr. Amantea's old employer, Ian MacDonald, shows his influence here in the taut but expressive quality of these outdoor spaces, and the many and subtle ways Mr. Amantea works his wood. (I count five different types and finishes of wood here.) But Mr. Amantea has also been working, on his own, on the design of an exquisitely detailed poolhouse north of Toronto. He is now at work on a number of larger projects, but the Pranjivans' yard shows his facility with fine details.

In the front yard of the house, Mr. Amantea also contributed to the landscape design. That corner yard is now wrapped by a tightly trimmed low hedge and a garden with rectangular plantings of a few grasses, ground covers and hydrangeas, plus some precisely cut slabs of concrete to form a walkway. It's a modernist garden which, because it is low and almost entirely green, rests quietly on the leafy Rosedale street. Before, the yard was a favourite of neighbourhood dogs; now, this design takes it back, while – as Mr. Amantea puts it – "offering something to the neighbourhood." And that offering comes straight from the present day, with great care and with no apologies. 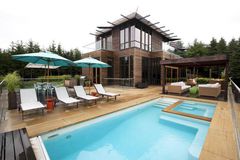 Toronto home displays the elements of interior style
May 11, 2018 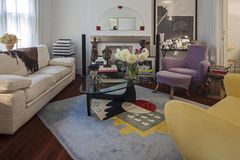 Renovation adds new vigour to a sagging Toronto home
May 11, 2018 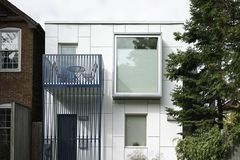