As you walk into the broad lobby of George Brown College’s Waterfront Campus in Toronto, squarely in front of you is a flight of stairs. It offers an enticing route upward along a wall of glass, overlooking a park and Lake Ontario. The message is clear: You can ascend under your own power, and it will be pleasant.

This vertical campus, designed by Stantec Architects and KPMB Architects, shows how the stair – a basic element of architectural grammar that had long been demoted to a secondary role – can again be of central importance. In public buildings and office buildings, architects are being asked to encourage social interaction, provide incentives to healthy behaviour, and form complex, beautiful space. Stairs are where these aspirations come together.

At the Waterfront Campus building, which houses four health-sciences programs, “the stairs are much more than stairs,” says Michael Moxam, vice-president of Stantec and one of the project’s lead designers. “They encourage a vertical flow from the city and the campus upward into the building, and they’re a visible, strong alternative to the elevator.” Thirty or even 10 years ago, the only stairs in a building like this would have been hidden away, windowless and designed as a fire escape.

The elevator would have been front and centre. It was more than 100 years ago that the invention of the elevator helped buildings to stretch vertically into skyscrapers; but in the second half of the 20th century, that useful innovation became a modern convenience that we couldn’t refuse.

Part of the shift was visual and spatial. The elevator took over the place of pride, at the centre of major public buildings, that the grand stair had once occupied. In pedestrian-friendly places, this can have a certain logic. Mies van der Rohe’s Seagram Building on New York’s Park Avenue combined the elevator lobby with an exterior piazza where people could be seen, if not linger. That model travelled to many buildings in business districts the world over.

But the elevator took over the suburbs, too, even in three- or four-storey office parks. By the 1970s, North Americans going to work became accustomed to a sequence of leaving their cars and rising – either from the parking garage or from the door to the parking lot – without ever climbing a step. (The grand staircase was now a symbolic device, as when the architect Morris Lapidus added a “stair to nowhere” in the lobby of the Fontainebleau Hotel in Miami Beach in 1954; visitors would ride an elevator up one level, check their coats, and then stride down the curving stair to make a grand entrance.) 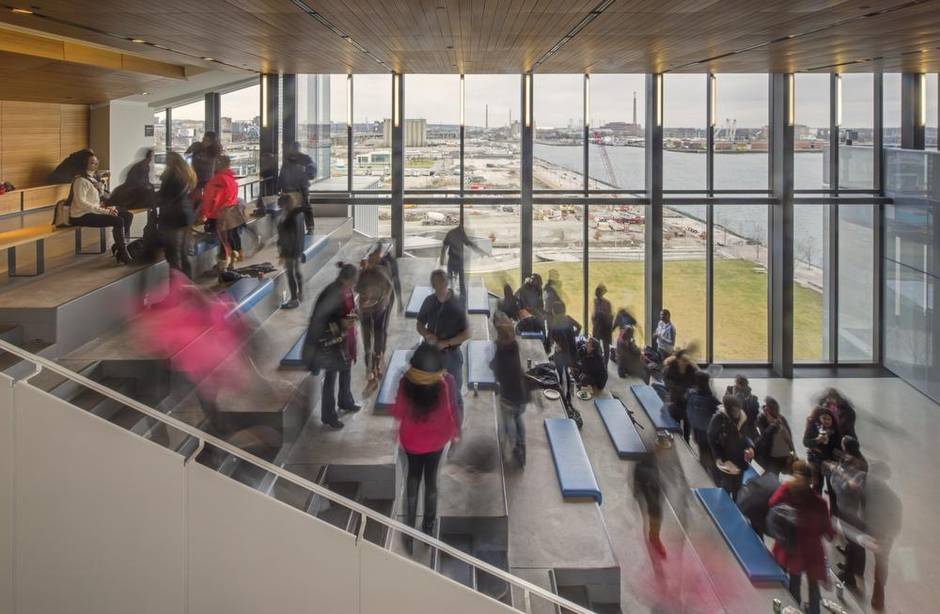 The rule of the elevator is now under threat. The growth of employment in inner cities has led to a crop of new office and institutional buildings, which reflect a renewed emphasis on pedestrian activity and street life.

The George Brown building is one of these; it was developed to help revitalize an area of Toronto’s waterfront that largely had been underused. Pedestrian activity is a sign of urban vitality, and tall buildings are required on central sites like this one. “This reflects the expansion of educational buildings from three- or four-storey buildings to a higher and denser scale,” partner Bruce Kuwabara of KPMB explains. “When you’re urbanizing, how do you do that at seven floors? Or 15 floors?”

The stairs snake upward through a series of open lobbies with seating, inviting students to linger. Interdisciplinary thinking is an explicit goal of the architecture. At the top is a pair of so-called “learning landscapes,” two-storey-high rooms that are part stair and part amphitheatre. In each, the walkable stairs run upward alongside wider, deeper steps suitable for sitting. These resemble the Spanish Steps in Rome; Kuwabara calls them “stadium seating.” On a recent visit, I saw students hanging out, studying in groups, and looking out at the fine views over the adjacent park and lakefront. 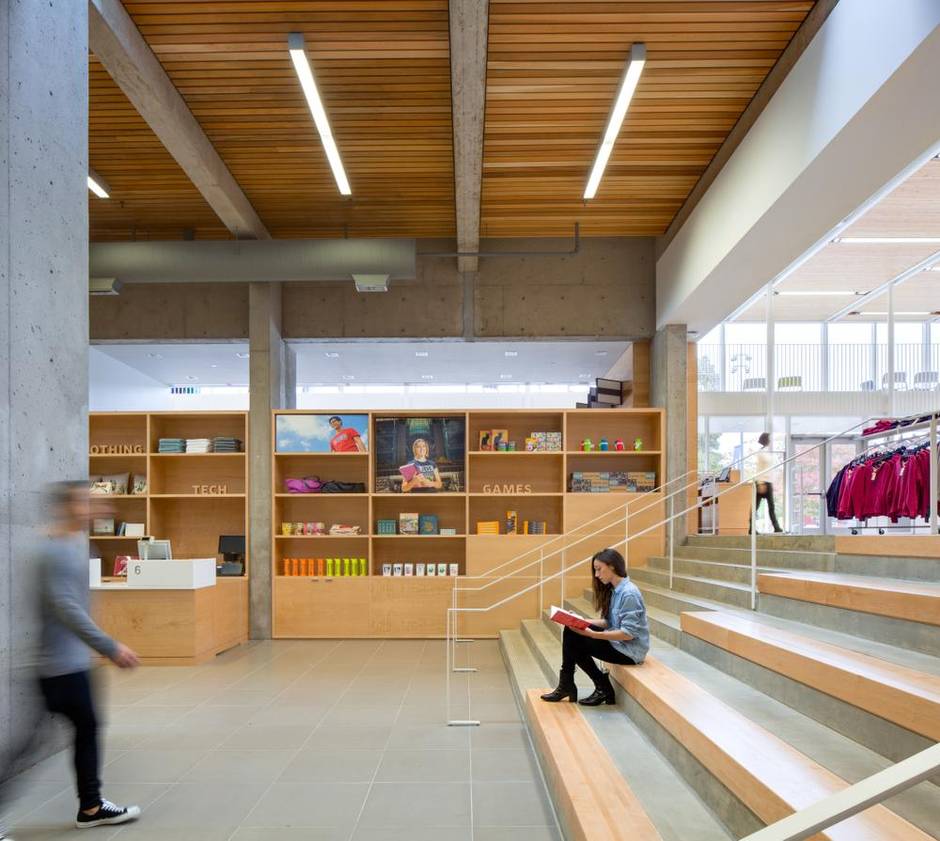 The bookstore at the University of British Columbia (Ema Peter)

When the main bookstore at the University of British Columbia in Vancouver was renovated, architect Office of McFarlane Biggar sought a similar quality. The bookstore sits slightly below ground, so the architects created a plaza outside to draw students – and then its own set of Spanish Steps just inside. “The steps provide a comfortable place for social interaction,” says architect Steve McFarlane. Together, the stair and plaza provide opportunities for programmed activities or for just hanging out – great places to exchange ideas or just for people-watching.

There is also a clear case that those students will enjoy their own gains in wellness. Studies have shown that awareness campaigns – such as stickers and posters coaxing people to use the stairs – can influence their behaviour, with modest but real payoffs in aerobic fitness. To be sure, elevators have an essential role for those with mobility issues, and accessibility regulations have become tighter in many jurisdictions. But for others, walking is simply healthier. With this objective in mind, the Center for Active Design, an American non-profit, encourages building designers to make stairs visible, prominent, attractive and available for use between adjacent floors of high-rise buildings. 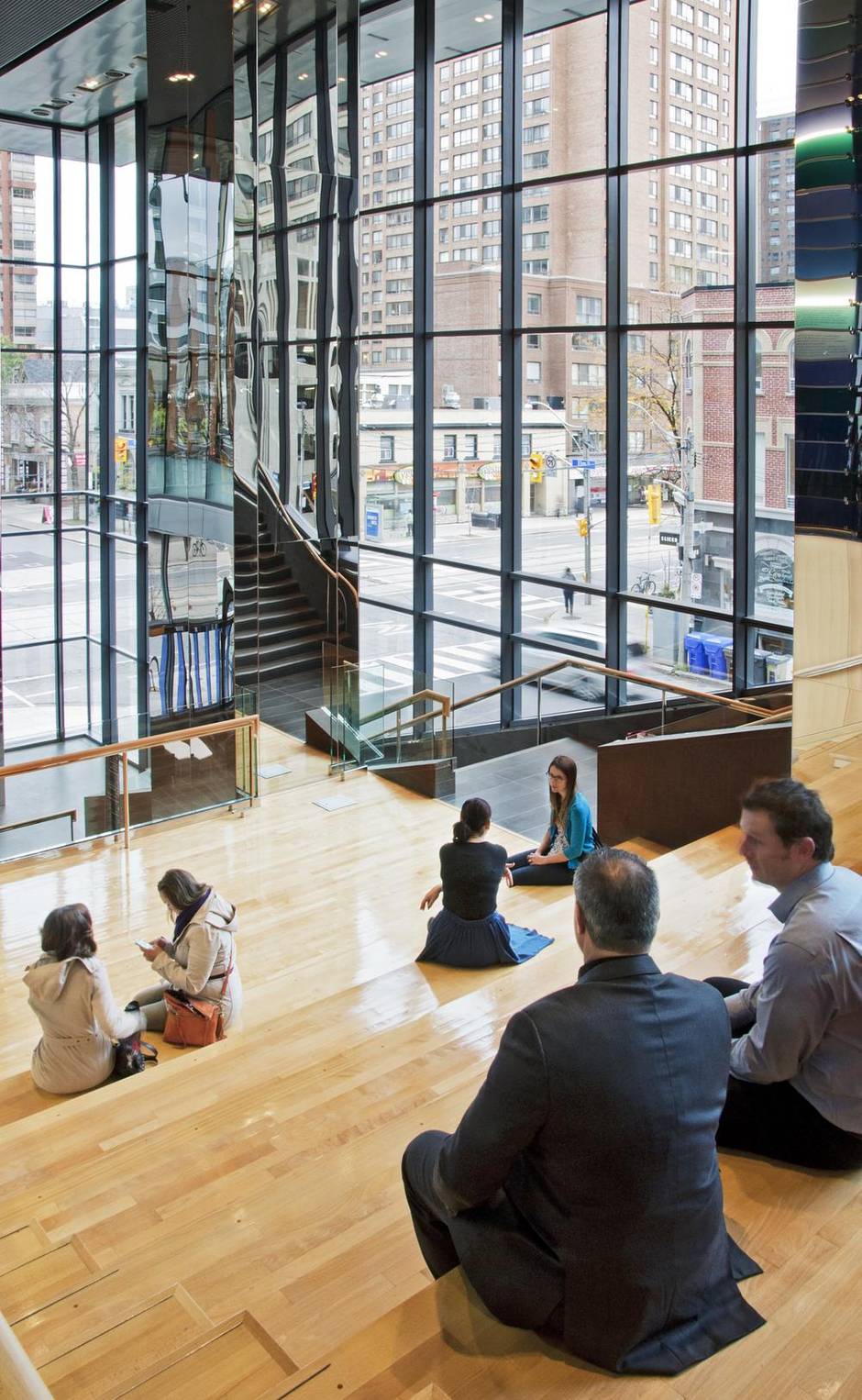 Gilgan Centre for Research at the Hospital for Sick Children. (Elizabeth Gyde)

In the recently completed Gilgan Centre for Research at the Hospital for Sick Children in Toronto, Diamond Schmitt Architects put all of those strategies to use. The building combines a four-storey public area, which houses conferences and meetings, topped by 17 floors of lab space.

The lobby’s main feature is a grand stair that sits at the corner of the building and ascends four storeys from street level. From outside, it is clearly visible from both adjacent streets through the building’s glass façade: It is a stair as showpiece. Its broad, shallow stone steps are comfortable underfoot. Visitors use them, too. In a few minutes, I saw scores of people climbing up while placing their hands on the solid oak railings, in full view of the street. Some lingered on an “amphitheatre,” the building’s own set of Spanish Steps.

Many of them, one morning, were headed for the third floor’s public-event space or the adjacent auditorium. But hospital staff also use the stairs, proceeding across a pedestrian bridge on the third level into the adjacent building and beyond. Diamond Schmitt’s Mike Szabo, the firm’s principal-in-charge on the project, calls it “the path of least resistance,” and that is by design. While elevators sit at the centre of the building, the stair “is the most efficient and effective way to get around,” he says. The route via elevator is deliberately more circuitous. 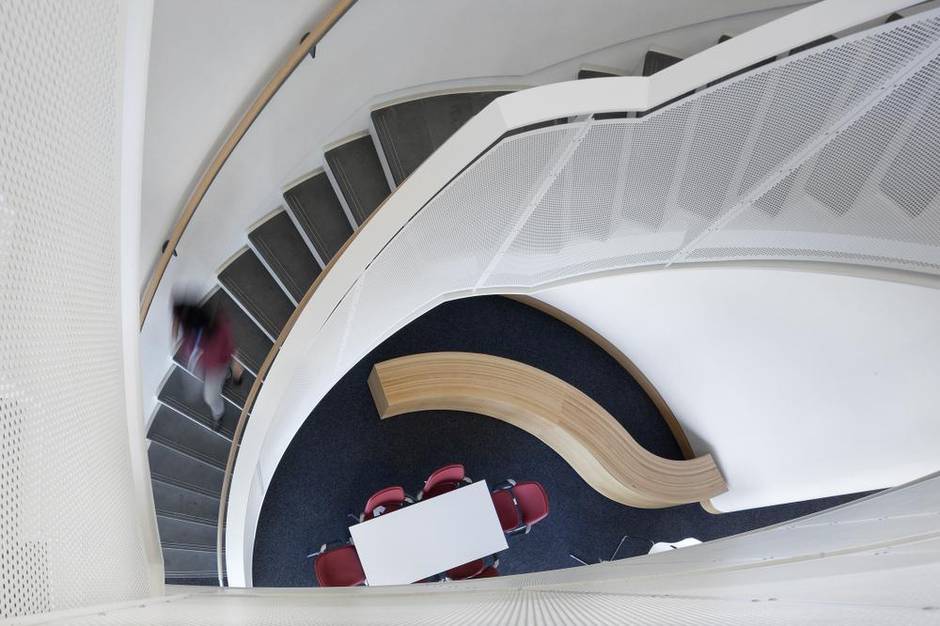 Upstairs, the laboratory spaces are divided into “neighbourhoods” of two or three levels each, each around an atrium that includes a broad, curving window that punctures the façade. These aimed to address the main architectural challenge, Szabo says, which was this: “When you put a facility of this size in high-rise format, how do you give it any kind of connectivity?” The answer, once again: stairs. The lab levels are connected by attractive, curving stairs, each of which is lined with a wall of glistening Venetian plaster. Moving from the 21st floor down to the lower lounge, it was hard not to savour the view over the city, the silky texture of the wall under my hands – or to imagine how much I would be missing by taking the elevator.