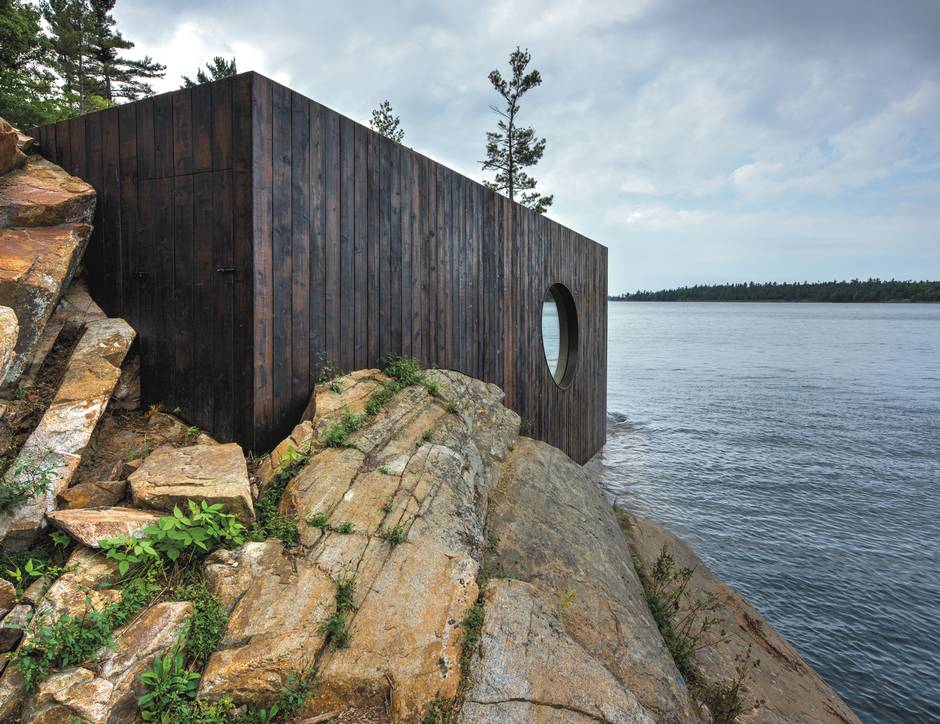 It started with a challenge: “Our client asked, ‘Can you build a grotto?’” recalls Alex Josephson of the Toronto architecture firm Partisans. The job, in more prosaic terms, was to design a sauna at a cottage on the shores of Ontario’s Georgian Bay. But that poetic idea of a waterside cave was just as important to Partisans and it led the firm on a journey from natural forms to computerized fabrication, the digital hewing of wood and harnessing social media to bring the final design to the world.

The sauna is a matte black box, about the size of a shipping container and clad in charred cedar. Its relatively straightforward shell conceals a phenomenal interior. “When you step inside,” says Josephson, “the first thing that hits you is the smell of cedar.”

That wood is what you’ll traditionally find in a Scandinavian spa, but there’s nothing expected about the way Partisans fashioned the material into a series of flowing curved forms. Pieces of solid timber, some eight inches thick, fit together into a 3-D puzzle, the turns of the wood sweeping into benches, up the walls and around three circular windows that look out on rock, sky and deep-blue water. 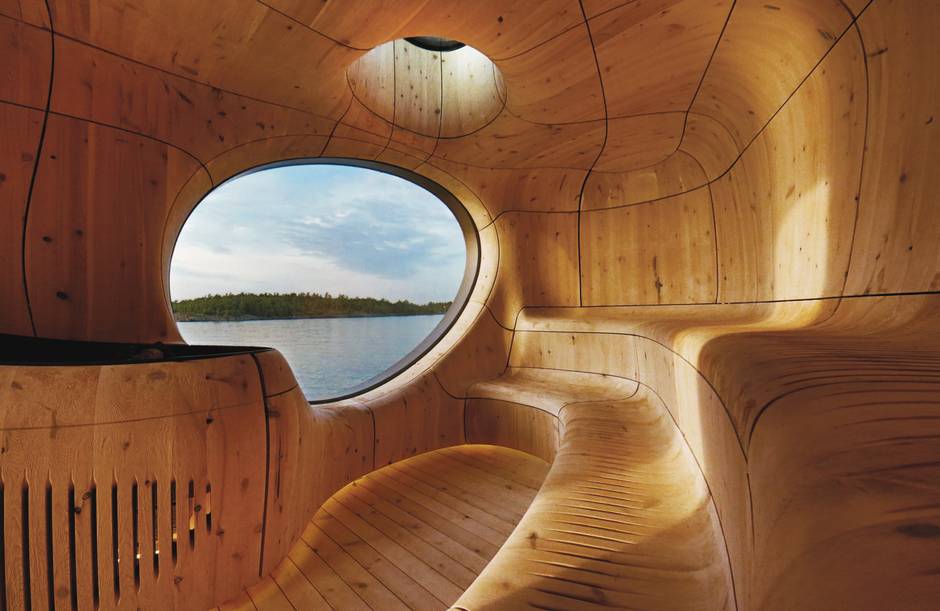 The forms do evoke a grotto and you can imagine them being sculpted by the slow erosion of water. In fact, they are the products of art and technology. Partisans, led by partners Pooya Baktash, Jonathan Friedman and Josephson, began their design process by producing a 3-D scan of the rock face where the sauna would sit. “We wanted to understand every millimetre of the rock,” Josephson says. On their computer screens, the undulations of the granite began to suggest shapes and drive the creative process. “This building,” Josephson says, “is about letting the rock draw a line.”

The architects began using 3-D printers to create a series of physical models. Then they worked directly with the woodworkers MCM to produce the wood panels, which were milled by computer-controlled tools that faithfully followed the digital model. This process allowed the architects to realize the sauna’s peculiar geometry with great precision. “We came back to thinking about the space in millimetres,” Josephson says. “There are no craftsmen who can make this by hand.”

Even the assembly of the building was specialized. The wedge-shaped structure was built in a workshop, carried through the narrow channels of Georgian Bay on a barge and lifted onto the remote rock by a crane on another vessel.

The architects captured this process in a video, which they posted online with the title “Grotto: A Canadian prefab construction.” Incorporating the “P” word links the project to a powerful architectural trend of the moment. Its use of CNC (computer-driven milling or fabrication) and the brief to create something that looks like it was produced by natural forces also make the project particularly contemporary. 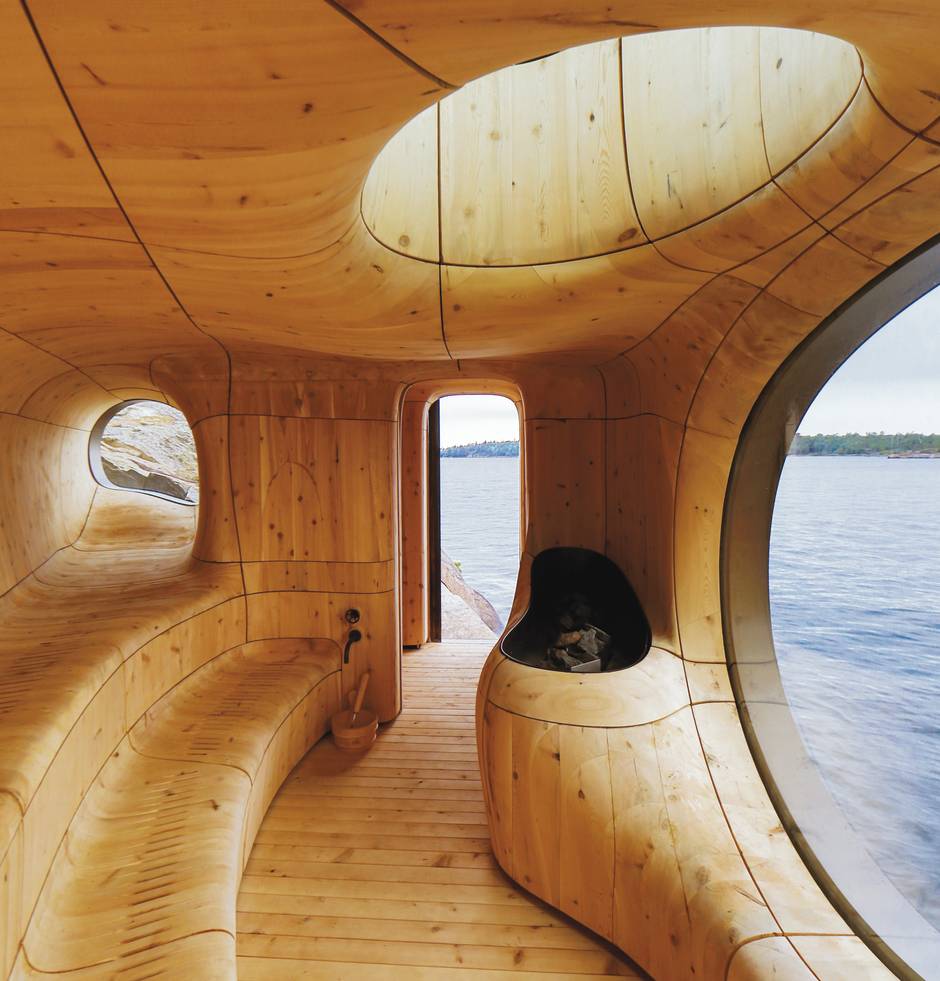 For all of these reasons, the Grotto has proved remarkably compelling to design media. It’s been published online by Wallpaper*, ArchDaily and Dezeen, as well as more than 50 other sites. It was also “project of the day” on the site Architizer and, in April, won one of that site’s A+ Awards, putting Partisans in the company of global design leaders like Skidmore, Owings & Merrill and Neri & Hu.

The irony about all this attention is that the sauna itself is deeply private. Because of its vague and remote location, few people will make pilgrimages to peek at it. (“You could get lost on the way,” Josephson laughs, “even if you know where you’re going.”) And yet hundreds of thousands of people have seen it online. The Grotto’s private/public nature makes it ideally suited to how people consume architecture today.

Marc Kushner, an architect and the CEO of Architizer, calls the project “a triumph,” and he attributes its online success to the power of its photographs. “This little sauna checks a few big boxes of arresting visual images,” he says. “The forms are curvy, they’re supple, the wood is warm, the setting is otherworldly. They’re lusty photographs. And that, more than anything, is a sure way to get a building noticed online.”

Remarkably, the photos were taken not by a professional with specialized equipment, but by Friedman. They are great images and, as Kushner suggests, sensual, the sun caressing the honeyed surfaces of the wood, the granite and the lake.

Josephson says that he and his colleagues are surprised that the project has been so enthusiastically – and widely – received. “I feel like we achieved an architecture that people have been wanting to achieve, in a material and at a level of quality that hasn’t been achieved yet,” he says.

It’s a fair assessment, and exposing such an achievement via social media can help architectural projects translate beyond the boundaries of the profession. Architects like to tell stories, and Partisans has a series of robust arguments to explain where the forms of the sauna come from.

But such narratives are often irrelevant to the general public.

“As architects, we’ve taken on this tradition of attaching big complicated words to make a project worthwhile,” says Kushner.

The Grotto transcends that. “I can talk about it with all of those big architecture words, but, in the end, you don’t have to talk about anything to appreciate it. The design they created stands on its own.”