In the late 1960s, downtown Toronto welcomed three buildings like nothing it had ever seen. They were black modernist monoliths: two skyscrapers and a one-storey pavilion, precisely designed by Mies van der Rohe. The Toronto-Dominion Centre gave the country a new set of architectural icons wrapped in glass and black steel.

The complex has been expanded, and now it has new features: green-and-white signs of the TD Bank stuck on to two of its dark, ribbed facades. These stick-ons are legal, historically defensible – and wrong. In this place, where corporate Canada once made the grandest possible statement with architecture, they signal an unfortunate smallness of vision.

TD Centre was the first of the modernist bank complexes in Toronto, and it was highly ambitious: spanning nearly an entire city block, capping a new underground mall with a granite plaza and verdant lawn, and wrapping the elevator cores of each building in sumptuous travertine. It was TD and Fairview Corp. (later Cadillac Fairview), then the development arm of the Bronfman family, which took the leap. They were driven largely by the industry of Phyllis Lambert, the Seagram heiress who had lobbied her father, Sam Bronfman, to build the Seagram Building. That iconic structure, today a New York landmark, was the model for the towers at TD.

And today, Lambert, who went on to found and run the Canadian Centre for Architecture, is disappointed that any of TD's facades should be disfigured by signage. "Mies said God is in the details, and he's right – not just for his buildings but all buildings," she says.

TD Centre's original three buildings, by Mies, are some of Canada's most important. In the 1960s, the German-American Mies was already a titan of 20th-century architecture, having spent 40 years developing "skin and bones architecture" – a radical, universal language that emphasized structure and made contemporary building materials into poetry. The goal was, as Mies wrote early in his career, to design "almost nothing." At TD, that meant a set of precisely modulated grids: rectangular windows separated by steel I-beams. On the banking pavilion, the windows and steel members are placed in a rhythm and formation that the ancient Greeks would have admired.

"They are the owners, and they have a responsibility," she says of Cadillac Fairview, which is now wholly owned by the Ontario Teachers' Pension Plan. "When you set a high standard, the building has a strong sense of place in the city."

Cadillac Fairview defends its stewardship of the complex, and there are reasonable historical arguments to support this move. The original three-building complex was expanded after Mies's death in 1969 with another three towers in 1974, 1985 and 1991. It is two of those later towers – not designated as historic by the city – that have now been lit up. "Those buildings were not part of the original design," Cadillac Fairview executive vice-president Wayne Barwise says. "The two buildings that were designated have not received any signage, nor will they be receiving any." That is why the city of Toronto did not, and could not, officially oppose the new signs.

But who knows the difference? For the average passerby, the three post-Mies towers read as part of the same ensemble. They have a powerful presence on the skyline: They are the Platonic ideal of the skyscraper, times five.

Up close, it's a different story: The 1991 Ernst & Young Tower, its design led by architect Scott Tan de Bibiana, makes a clear departure from Mies's design language. It straddles the 1937 Toronto Stock Exchange building, enclosing its art deco facade in a way that is very much un-Miesian. Yet its top carefully mimics the proportions and materials of the original towers. "It's got the same language," Lambert says. And having constructed buildings in that manner – mimicking Mies – the developers have a responsibility to preserve their presence on the skyline.

Cadillac Fairview is a sophisticated owner; it understands that it has a valuable asset to protect. In recent years it has overseen a $200-million restoration of the complex, including replacing its Saint-Jean granite pavers and plantings and repainting the towers' facades. But the signs are a very public gesture of disrespect that cuts against this good work.

And the details, the sort of things not officially overseen by architects, quietly come apart. The interior of the banking pavilion is designed, literally, to the inch, but last week there was a temporary banner for a charitable cause hanging on the oak panelling. It's not a big deal. Neither is the new decal applied to one of the glass panels on the building's facade, advertising wheelchair access with a typeface and awkward graphic design that would make Mies sigh. But once you start to add up details like this, as I did – bad furniture, fraying finishes, ugly signage – they begin to have an effect. And broader changes have also been made. The signage in the underground retail concourse was once uniform, its black aluminum signs cut with letters in a typeface designed by Mies. That consistency is gone now.

Today such a level of design ambition is lost to history – as you can see by looking at the sequence of towers that grew up in response to TD Centre and are now, in their own ways, aging. Across Bay Street to the east, CIBC's excellent skyscraper designed by I.M. Pei features big, bold decals along its ground-level facade. Across King Street to the north, the Bank of Montreal's main branch at First Canadian Place was once a louche but grand marble hall – designed in the early 1970s with input from architect Edward Durell Stone, then wildly famous and now nearly forgotten. Now the bank has replaced the tower's marble skin with glass, and has hired interior designers Figure3 to fill the branch with a series of "hives" and meeting areas. This project is very handsomely done, but its main feature is a cluster of cubicles.

Up against that, TD Centre still retains the purity of a temple. And you don't put billboards on a temple, unless you want to anger the gods.

"All five banks downtown have signage on their towers," Barwise says, "and it's not fair to say to TD that they can't have one. For commercial and branding reasons, it's important for TD to have some signage."

This view is understandable, and wrong. "I wonder why [TD] feel they need to identify it," Lambert muses. "It is such a great complex. It has such a powerful sense of place." Exactly. TD Centre may be the most distinguished set of buildings in Canada precisely because of what it holds back – because with its architecture it says almost nothing, and yet so much. 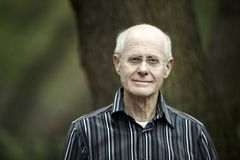 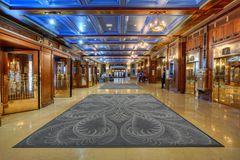