In buildings, green is fashionable. That is, the idea of green – of building and living in tune with the environment. “Sustainability” is a term that’s espoused by every self-respecting architect, repeated in every high-end shelter magazine.

At times, this can enter the realm of the silly – as in an “eco-conscious” family house that’s 14,000 square feet, such as Tom Brady and Gisele Bundchen’s. Feeding a bloated mansion with solar panels or geothermal energy, a practice that’s criticized as “greenwashing,” is increasingly common in luxury home building.

But in renovating and building homes, as individual homeowners we can do something meaningful for the planet – cutting energy use, saving water and also cutting waste. The tools include an array of technologies – and also employing traditional common sense. Back in the mid-1960s, the writer and architect Bernard Rudofsky collected examples of “vernacular architecture” – buildings from around the world that were shaped by traditional wisdom: “Untutored builders,” he said, “welcome the vagaries of climate and the challenge of topography.” Today, architects and sensible clients are doing the same thing. 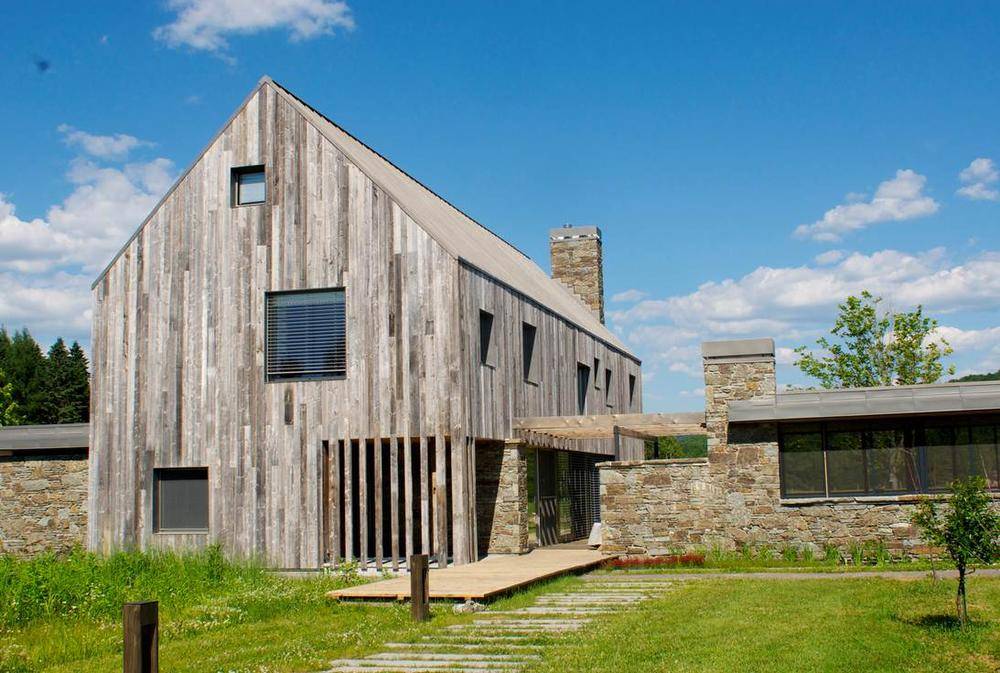 USING THE SUN AND THE WIND

‘It’s a fascinating time,” says Montreal architect Danny Pearl of the firm L’OEUF. “Some people are willing to live in harmony with the planet, and others are trying to use new technology so they can maintain the same lifestyle.” L’OEUF just completed a new home near Mont-Tremblant, Que., sited within a working organic farm. And while it is is built in a contemporary manner, its fundamental ingredients are traditional – its very form is designed to cut energy use.

Dubbed the “House in Four Fields,” it’s a second home for an affluent Montreal family, but is designed to fit the landscape: Its form mimics local barns, and local Mer de Champlain stone was used for its main ingredient, a long stone wall that extends past the edge of the house. The stone wall defines a courtyard – a sheltered outdoor space that remains comfortable on the hottest summer days.

The house’s walls are built to be nearly airtight and highly insulated, meeting the rigorous Passive House standard of energy-efficient construction. The house has carefully placed windows on the south side, so sunlight can enter and warm up the concrete floor – which heats up slowly, and retains that warmth in the cool of nighttime. This is what is called passive solar, and it is a basic tool of sustainable building. Passive ventilation cools the house during the months of fall and winter. Windows on the end gables open, as do skylights, creating a strong cross-breeze that moves along the length of the house and pushes warm air up and outward. This kind of air movement is called stack ventilation, “and it sounds a bit complicated, at least for anyone born after the 1970s,” Pearl says with a laugh. “If you’re older than that, or if you live in an old house, it makes sense.”

This house doesn’t escape the demand for technological solutions: the clients asked for a sophisticated home-automation system that will open the sunshades above the windows to allow distant views, and control those windows and skylights at night to ensure the house remains perfectly comfortable. But solid shading devices and a bit of effort twice a day would work just as well. 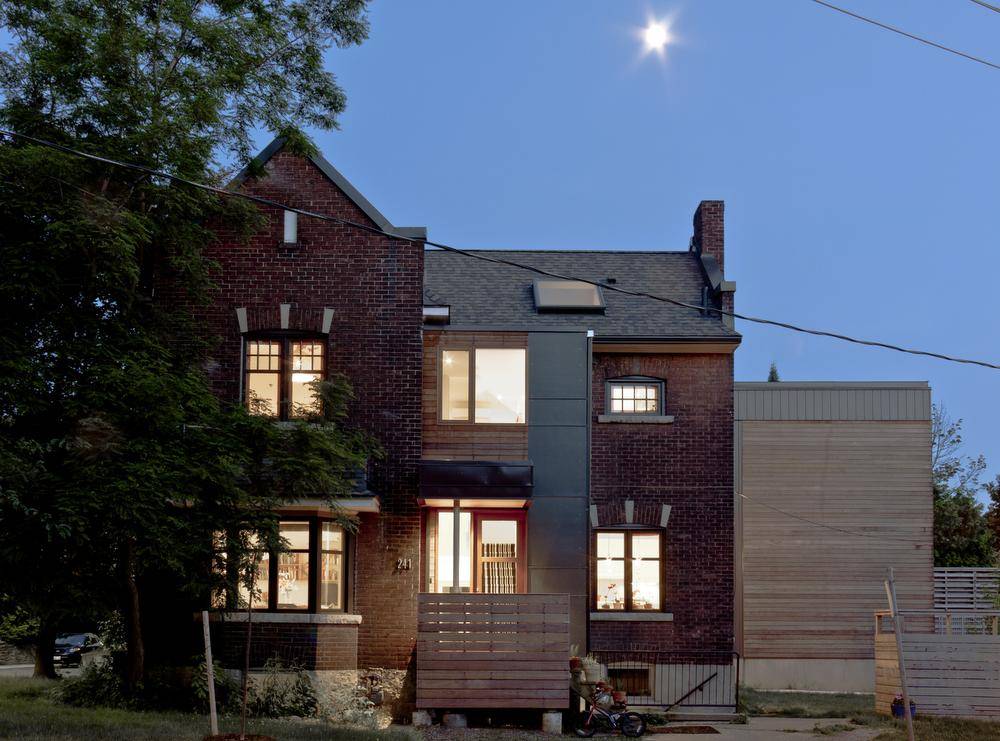 In North America, we live large, literally. According to research by Canadian Architect magazine, the average new dwelling built in Canada is about 1,950 square feet, a number that is about 40 per cent higher than it was in the 1950s. Understanding that number provides an easy path to a reduction in energy use, building materials and construction waste: Build efficient houses that are just as big as they need to be. An even greener strategy is to renovate an existing building rather than demolish it. Solares Architecture followed this model when they renovated a drafty 1,500-square-foot house near downtown Toronto to accommodate a young family and make it more efficient. Clients Nick and Julia Knezic had lived there for several years and found its layout unsuitable. “This was about modernizing the home – but doing it through clever design rather than throwing space at the problem,” says architect Christine Lolley.

Lolley and her partner, Tom Knezic (also Nick’s brother), kept the house’s attractive and solid brick shell. Within that they made some simple moves, stripping out a few walls on the main level and combining rooms while reshuffling the upstairs layout to actually add a bedroom and bathroom within the existing footprint. New doors and windows and spray-foam insulation created a much tighter envelope. (One small detail: The wood frame of the house is set off from the brick wall by an inch of insulation, so it can’t conduct heat.) The end result: The building uses 67 per cent less energy than it did before, which shows up in the bills and in the owners’ comfort level on the worst January days. “You don’t need to feel chilled through the winter,” Lolley says, “if you’re in a well-built house.” 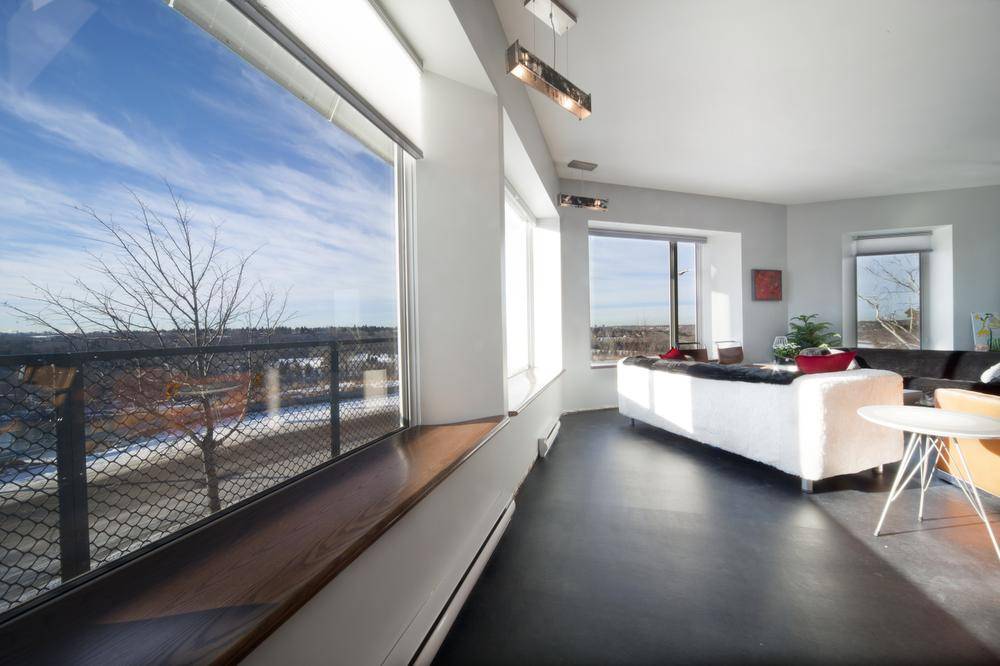 The architect Shafraaz Kaba built a new house for his family, and he left out a gas line. This might seem like a problem, since they live in Edmonton, and winters can be a bit brisk. But using no natural gas is only one of his ambitious goals; the house is also designed to shoot for “net zero,” to produce just as much electricity as it uses in an average year.

His design combines one significant piece of technology – photovoltaic (PV) panels to generate power – with no-tech strategies to reduce the family’s energy consumption. Overlooking the city on a rise, the two-storey house is “a skinny box,” says Kaba, a partner at Manasc Isaac Architects in Edmonton; it is insulated to an extremely high standard, and placed in the optimal position – with its long sides facing north and south. Along the south facade is an array of windows, through which the sun heats and illuminates the house for much of the day. And above the windows is a set of PV panels. “We ended up using them as an awning,” he says. “They create our power” – they have a 4.8-kw system that feeds back into the electrical grid – “but they also block the sun from coming into our house at just the right angle.” Natural ventilation (through operable windows at either end) allows breezes to pass the length of the house and air it out on a hot day.

In winter, the family fires up a wood stove and some electric baseboard heaters, but that’s not always necessary. When Kaba spent a year doing development work in Pakistan, he noticed that a traditional practice – hanging tapestries on exterior walls – added a few degrees’ worth of insulation to a house, which makes “the difference between cool and comfortable.” So, at his home, when somebody’s chilly, they first just put on a sweater. 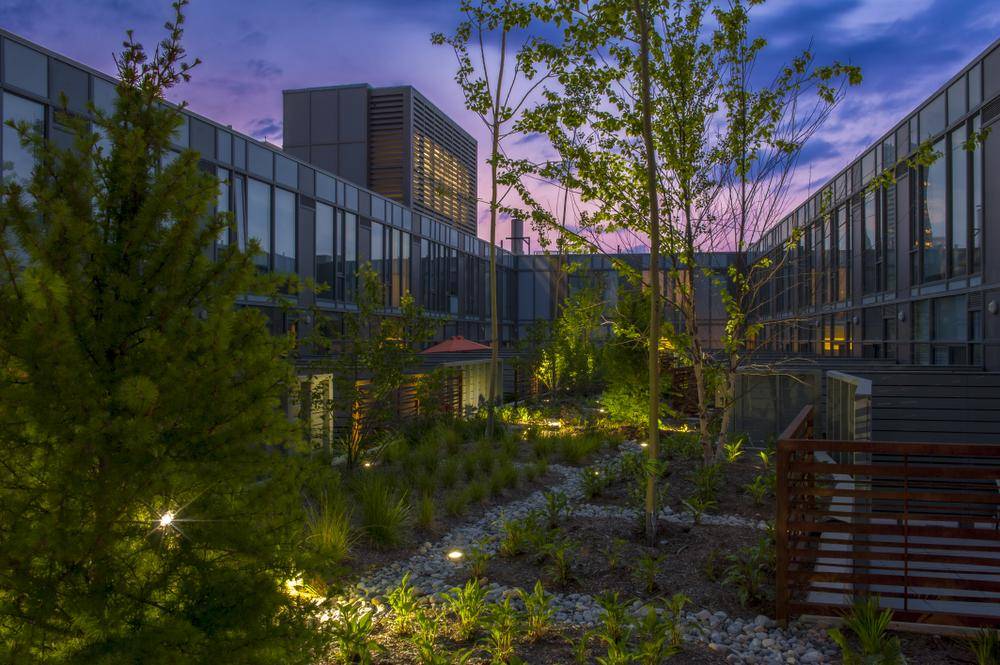 The environmental impact of gardens is tremendous: in North America, the preponderance of tightly manicured lawns (mostly made of one single species, Kentucky bluegrass) puts considerable demand on water sources while also restricting a healthy mix of plant species. A greener approach is to create a garden that, paradoxically, looks less green.

The landscape architect Scott Torrance and his office know how to create less thirsty gardens, and they applied that skill to an unusual project: a series of three rooftop gardens on a condo building, Market Wharf, in the centre of downtown Toronto. The project is a series of planted roofs, or “green roofs,” which sit on top of the building, providing a natural counterpoint to its concrete, glass and brick. They also reduce the building’s environmental impact. For one thing, the plants soak up rainwater, keeping it out of city storm sewers. The green roofs also serve as powerful insulators, and Torrance (who has also built green roofs on smaller projects) says their effect is noticeable. “There is a real energy savings, and the green roof also keeps the air cooler around the roof. In the summer you can feel it, for sure.”

But these specific green roofs demonstrate a selection of plantings that require relatively little water and little maintenance. The plants on Market Wharf are all native species, meaning they grow and therefore thrive in the specific climate of the region. These include the common shrub serviceberry and also tamarac and quaking aspen, which are rarer in urban contexts but do well. “And we wanted to connect people to their native environment,” Torrance says.

Torrance argues the best sustainability strategy, here or in a small back garden, is to plant carefully for specific water conditions as well as sun and shade – grasses and wildflowers in dry areas, and thirstier plants in areas that get runoff or water from downspouts. “As a homeowner, you can divide your yards into various zones,” he says. “I chose the right plants for the right location, and they’re getting huge. It’s like magic – but it’s actually pretty simple.”