Oh my, can it be true? The suburbs have sprawled in reverse, and hit Harbourfront centre, too!

They’re in the newly named “Artport Gallery” on the main floor, in the hallways behind glass, on the walls and – gasp! – in the importantly named “Architecture Gallery,” no less.

Surely there’s no ‘architecture’ in soulless suburbia to celebrate?

Curator Patrick Macaulay begs to differ: “When you first start thinking about doing something about the suburbs, it’s in terms of the negative, but this is not about being negative at all,” he says. “This is a celebration of the suburbs and bringing attention to the differences that are there, and also to say it’s a great place to live.”

He’s right. And as regular readers of this column know, I think suburbia – whether inner-Scarborough or outer-Vaughan – is so wonderful, I often break into rhyme. In fact, the more new Canadians populate Toronto’s outer limits, the more wonderful they get, as the dead zones between 1960s highrises spring to life with farmers and flea markets, and old strip malls transform into marketplaces selling spices and saris. 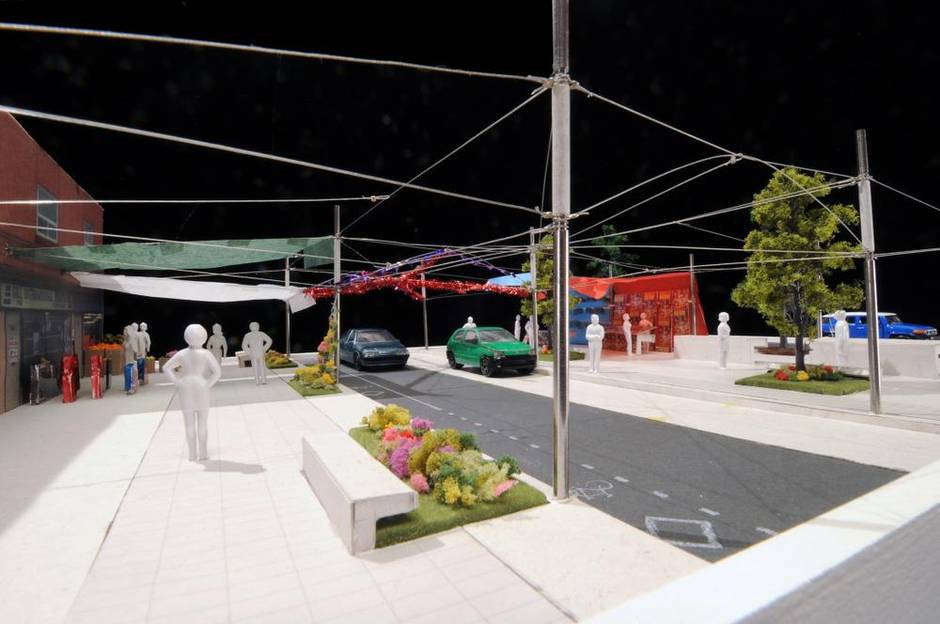 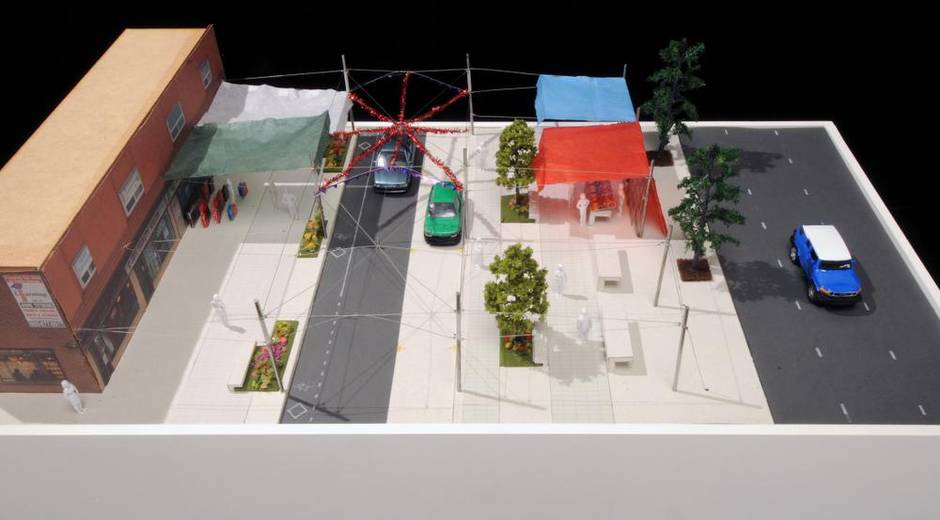 In fact, in the Architecture Gallery, Bindya Lad’s The Network, illustrates how easy it would be to take the annoying asphalt fronting the average strip mall and transform it into something more urban and vital. As she posits, nowadays, just as many people walk to the strip mall as drive (especially in the South Asian community), so why not reduce the amount of car-dedicated space in favour of places for people?

In Ms. Lad’s imaginary scheme, the enormous black sea would be reduced to a narrow two-lane strip of road that bisects two large pedestrian areas; cars would park on one side of the strip and use the other for entry and exit. And the whole thing would visually tie together with a “virtual canopy” of cables with hanging lamps, decorations, and extended awnings stretching from shop fronts. 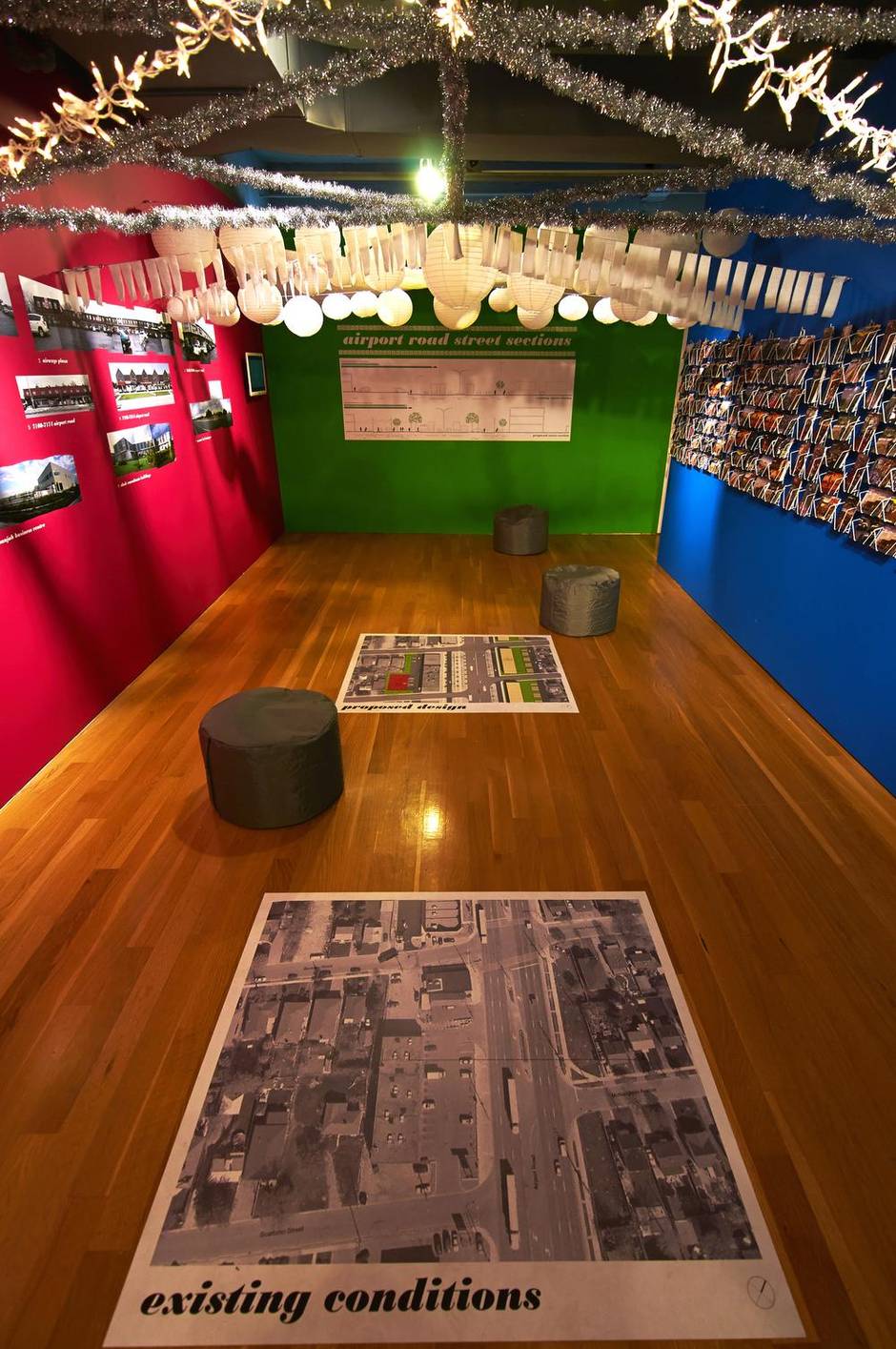 While simple, this unifying “network” would really make an impact, just as it has in the second-floor gallery itself, says Mr. Macaulay: “When she proposed this in the drawings, we said, ‘It’s just aircraft cable, what’s going to happen?’ and then all of the sudden, three days before the opening, we string it up and she comes with her brother and a friend and starts to install this and we said, ‘Oh my God, it’s changed so dramatically.’”

Also dramatic is the neighbouring exhibit by Buffalo-based architecture firm Davidson Rafailidis. In a fun, looping video, a derelict 1957 strip mall is broken down into its components, such as concrete blocks, metal sheets and steel I-beams, and then reconstructed into myriad new, usable buildings. 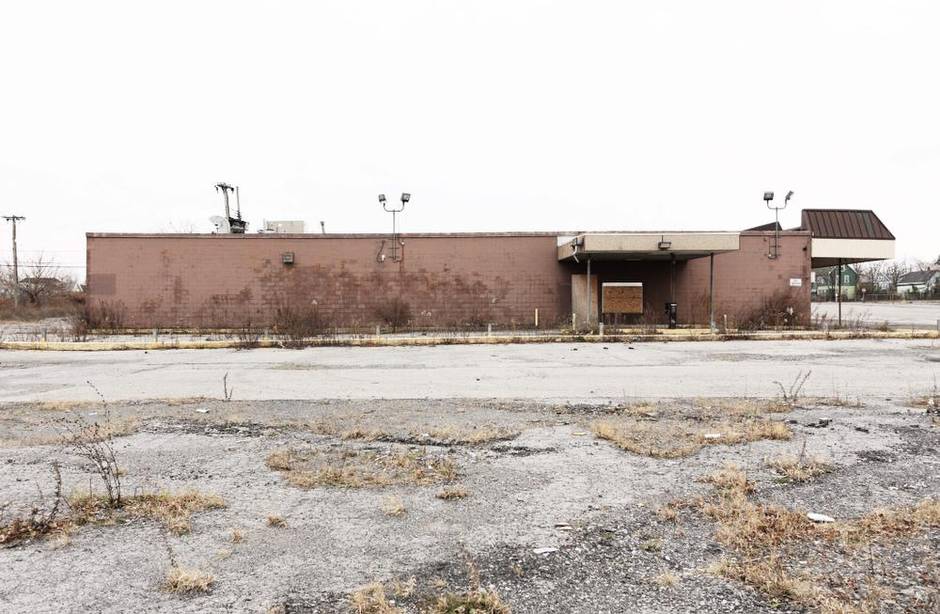 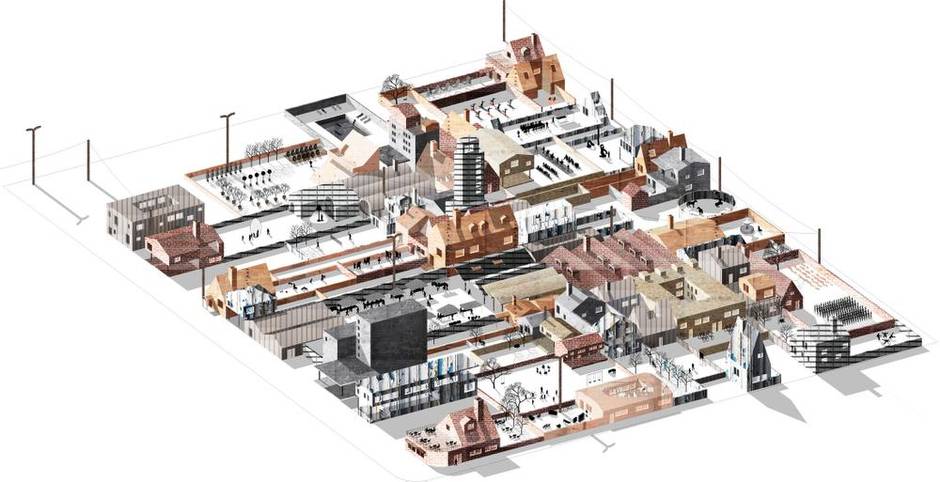 A third installation by furniture/lighting designers normal goods, The Garden Pod, suggests the simple arrival of a large storage pod – in this case containing gardening tools, soil, and planter-boxes – could change the use of the strip mall parking lot; when that use becomes stale or demographics change, a new pod containing playground or sporting equipment could take its place.

One gets the feeling that each of these schemes is possible with enough passion and perseverance.

Speaking of which, photographer Robert Burley’s passion for Toronto’s “outer fringe” is so large, it covers entire walls of Harbourfront centre. Gorgeous images of big box malls wearing South Asian frills and a thicket of boxy Markham homes speak to his love of these “hopeful places that appear to have little interest in the city proper.” Mr. Macaulay explains that the photographs have been super-sized onto vinyl and adhered to the walls in order to confront the very people who come from “the 905” to visit the gallery on weekends: “People see this and say, ‘I live down the street from there! This is my neighbourhood, what is it doing here?’”

While the love contained within is no less large, eight little vitrines on the main floor contain individual responses to the suburban experience in Suburbed. One contains Spacing magazine co-creator Matthew Blackett’s reimagined shopping-mall-only Toronto transit map, another showcases Taylor Bosada’s tiny oil paintings based on cell phone images taken while stuck in Oakville traffic, and another pinpoints the hundreds of cell phone towers outside Toronto’s borders. 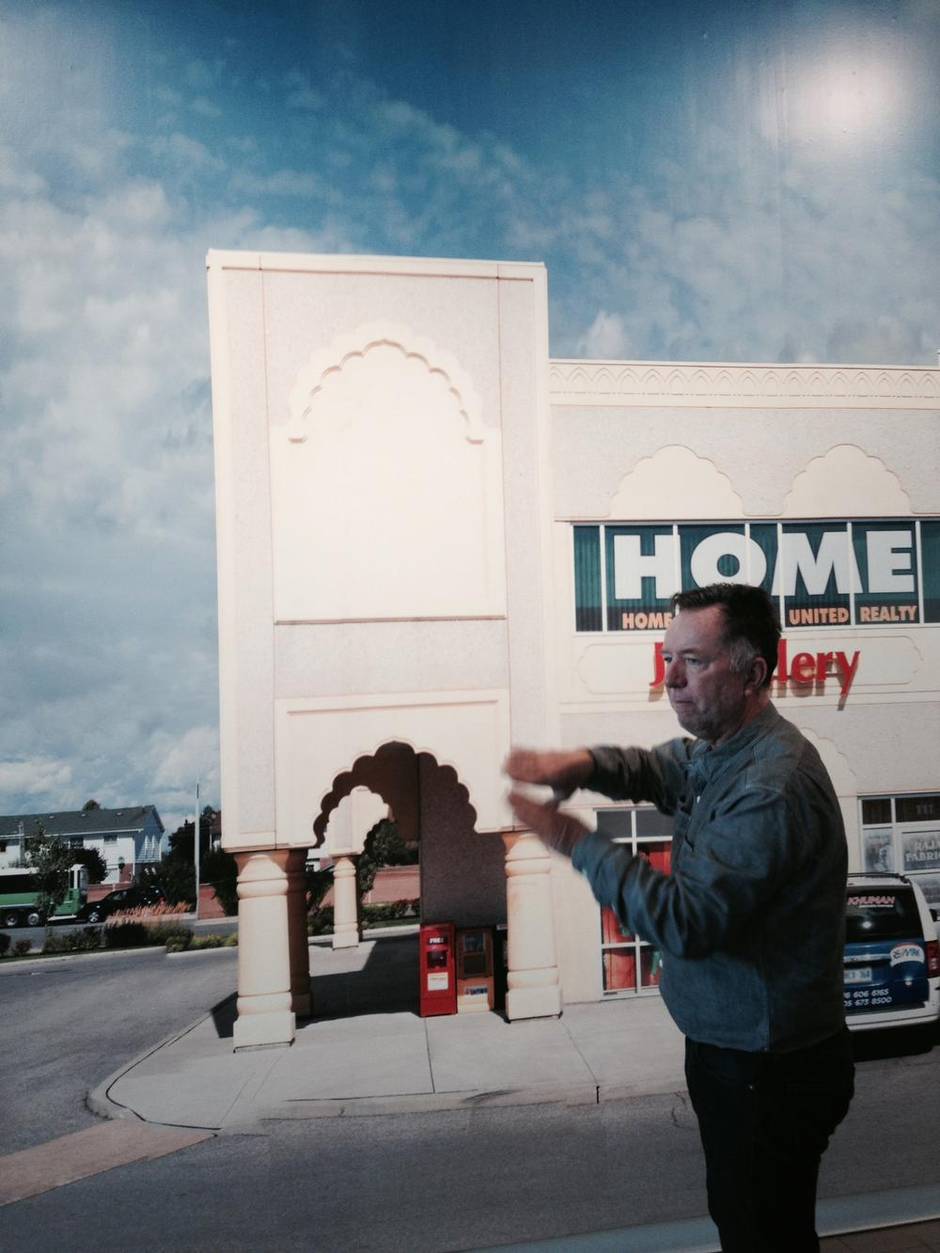 Curator Patrick Macaulay in front of a Robert Burley photo. Photo by Dave LeBlanc for The Globe and Mail

The pièce de résistance of this sprawling exhibit, perhaps, is found in the Artport Gallery. Here, a mountain of consumer goods such as radios, Christmas bric-a-brac, crock pots, garden gnomes, dollar-store picture frames and tacky fake floral arrangements remind us that, at one time or another, we’ve all had to choose between the car or ‘stuff’ for the garage.

Funnily enough, all of these items came from the garage (and basement and under the stairs) of the suburban home of Laura Mendes’ parents. One half of Labspace Studio (the other is John Loerchner), Ms. Mendes felt the need to “relieve” her empty-nesting parents of things they continued to collect “thinking that the kids would want it,” explains Mr. Macaulay. In true suburban fashion, there will be an off-site “yard sale” after the exhibition closes on Dec. 28, 2014 (see emptyingnest.com for a full list).

Yes, this exhibit has a sense of humour, but it treats the suburbs as worthy of serious consideration rather than as something to dismiss with a laugh. While it trots out a few clichés – a chunk of actual lawn or photos of identical gas stations – it more often than not twists our thinking on “accepted” uses of suburban architecture or the people who inhabit it.

And that’s worthy of a happy rhyme any time.

“Strip Mall: Architecture in New Suburbia” runs through to Dec. 28, 2014, at the Harbourfront Centre.