Have we finally found an escape from the flashy ‘starchitect’ era to a more pragmatic, quietly beautiful moment? Alex Bozikovic reports on the future of architecture 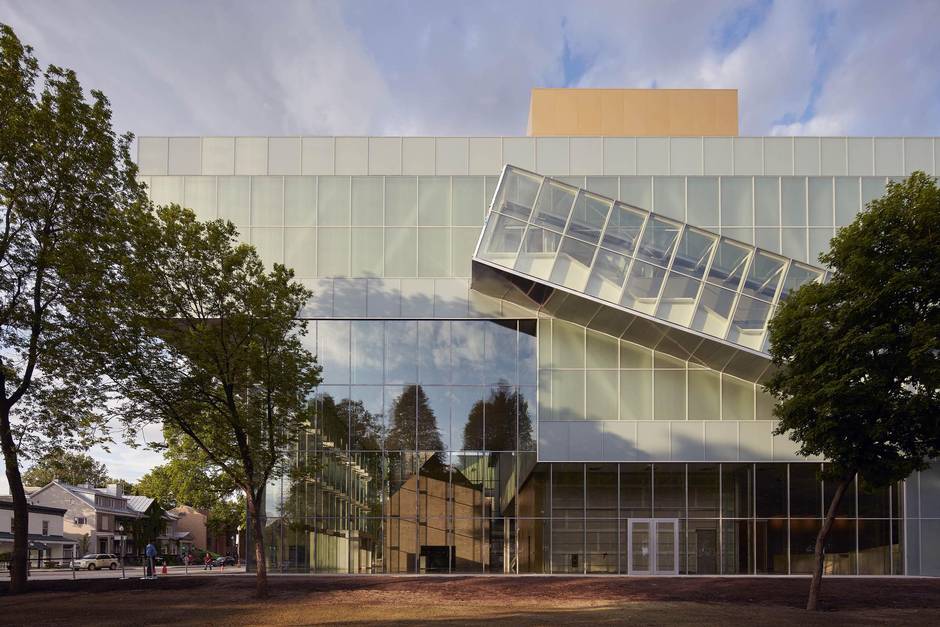 The Pierre Lassonde Pavilion does not want your attention. It is not an artichoke or a shard or a swoosh.

Rather, the new wing at the Musée national des beaux-arts du Québec is lucid and frank: a stack of white-box galleries wrapped in structural steel and veils of luminous, greenish glass. It embraces a nearby church. It gestures toward the city and reflects back the verdant National Battlefields Park next door. It stays quiet.

That was the intention: Its lead architect, Shohei Shigematsu of the firm OMA, says they strove to make the building defer to its context. “The most iconic move we made is to make it transparent,” argues Shigematsu. “This building is open, transparent and provides a gateway from the city to the park.”

It is that – and it’s also a gateway between eras, from the “starchitecture” era of the 2000s to the present moment. This $103.4-million, 14,900-square-metre wing, which came out of an international design competition in 2009, was born as a showpiece in the tradition of Frank Gehry’s Guggenheim Bilbao.

The pavilion is a very fine building, thoughtfully composed and artfully detailed. It doubles the exhibition space of the museum with well-built, versatile galleries. It raises questions, however, about the role of architecture in society: What is this sort of high design good for? Can a dose turn around the fortunes of a museum, or a city, by making it an international attraction?

Or should that even be the goal?

Before the June 24 opening, Pierre Lassonde, the mining magnate who was the lead donor for the project, talked about “architecture that makes you say wow” – and compared it to the titanium-clad, artichoke-shaped Bilbao, the sort of “museum that has changed its neighbourhoods, changed its city.” This idea has its own epithet: the Bilbao effect. 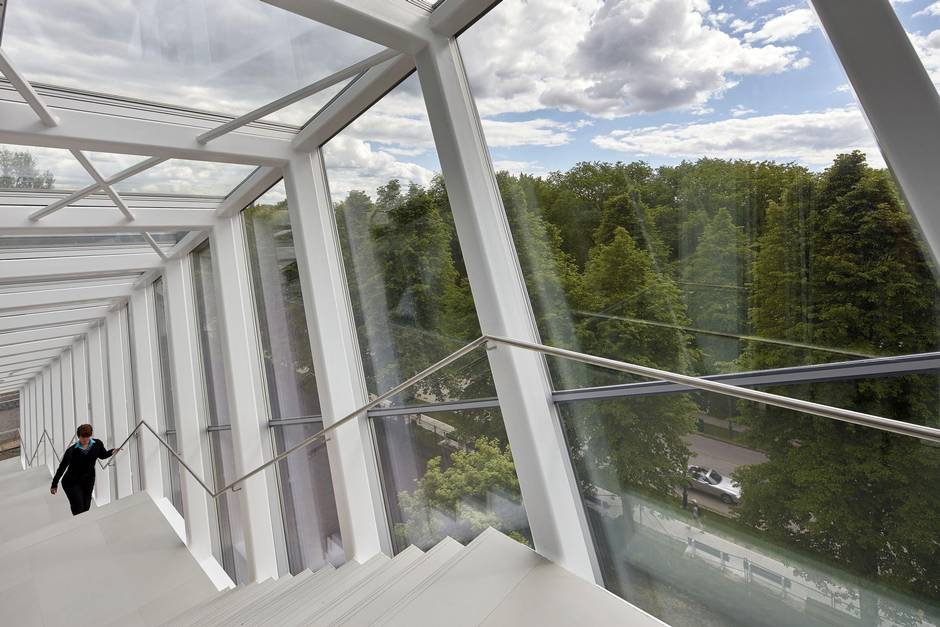 The building is a gateway from the 'starchitecture' era of the 2000s to the present, a shift from flashy design to a more subtle beauty. (Bruce Damonte)

Part of the Bilbao recipe is a world-famous architecture firm and OMA fits the bill: it is led, from Rotterdam, by Rem Koolhaas, a leader of the profession’s avant-garde for nearly 40 years. Koolhaas works with an odd combination of deadpan analysis and radical inventiveness. The office is best known in North America for the glass spiral of the Seattle Central Library, which opened in 2004.

They were in the rank of firms, including Gehry, Daniel Libeskind and Santiago Calatrava, who took part in competitions in the late 2000s all over the world.

Koolhaas himself presented the Quebec proposal in 2009. OMA’s global brand clearly helped them and Montreal firm Provencher Roy win the job; it was the first international design competition for a museum in Quebec’s history and the jury chose only foreigners in the final round. Other finalists included Bjarke Ingels Group, David Adjaye and Allied Works Architecture.

In most of the world, dreams of Bilbao died with the financial crisis of 2008. In a climate of austerity and suffering, dreams of flashy buildings became both unrealistic and unseemly. This affected OMA, too. “We contributed to making museums too iconic,” said Shigematsu, who runs OMA’s office in New York. “Now, that feels so passé.” The firm’s proposal to expand the Whitney Museum there, Shigematsu told me, was largely his own baby, “and I regret it now,” he said.

The MNBAQ building, by contrast, is “a product of the crash,” Shigematsu said, “which really put an end to iconic architecture.”

As such, it embodies the pragmatic architectural fashions of the present moment: it serves its specific context and its surrounding city. Like other new museum buildings from New York’s Whitney Museum to the San Francisco Museum of Modern Art, its design puts a strong emphasis on public space where people will want to gather. 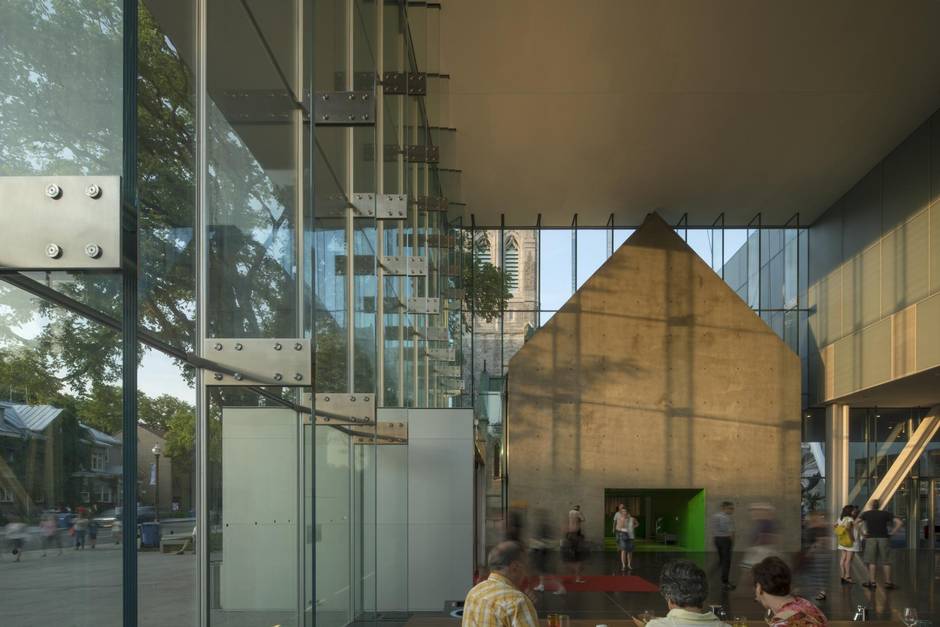 A grand, glassed-in lobby and restaurant provide a vestibule for the MNBAQ building. (Nic Lehoux)

The building’s main entrance faces north toward Grande Allée, linking the museum campus intimately with the street and the city for the first time. “It gives the museum a new front door to the city,” director Line Ouellet said.

Here, a grand, glassed-in lobby and restaurant provide a vestibule for the institution. The room opens through a 20-metre glass wall facing west to the park. Above, the mass of the new gallery spaces hover in the air, supported by bravura engineering. To the east lies a courtyard and the neo-Gothic Saint-Dominique Church; the church’s presbytery collides right into the glass lobby and Shigematsu has capped the gabled end of the building with a face of super-smooth concrete.

That’s one of the few showy moves here, along with the nearby central stair, which spirals dramatically from the top floor down into the basement, where a curving, rising 130-metre tunnel connects to the museum’s three existing wings deeper in the park. (The tunnel is itself a gallery, housing Jean-Paul Riopelle’s 40-metre-long triptych L’Hommage à Rosa Luxemburg.)

The stair expresses the central tension of the building. “There are moments when you can see the movement of people,” Shigematsu says, “and moments when you see the sculptural quality of the stair itself.”

This stair and another “window-stair” appended to the building’s west side, provide theatrical means for gallery-goers to move between the boxes of the pavilion. These boxes are wrapped in layers of glass, one printed with a ceramic fritting that modulates the sunlight; this allows the galleries, which are tall, L-shaped volumes straightforwardly divided into boxes, to gather some natural light. The collections on view here, focusing on Quebec modernism and contemporary art and design, look great; particularly the show of the Brousseau collection of Inuit Art, in a brightly sunlit gallery on the third floor. 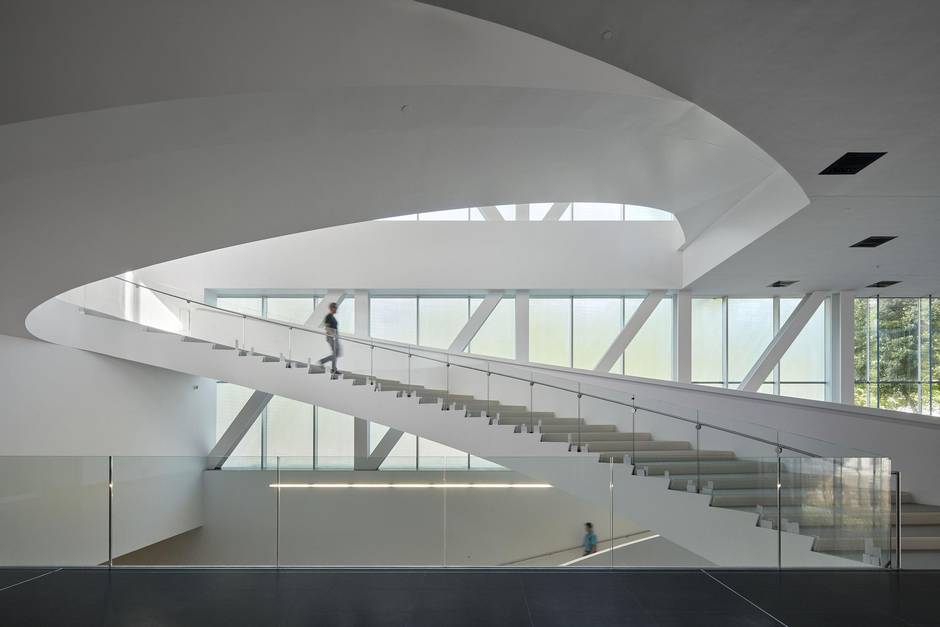 From the outside, these gallery boxes are clad in transparent and translucent glass panels in neat grids, revealing the diagonal grids of the steel trusses that support them. An elevator core skewers them through their centres. From the side, the structural drama of the building reveals itself – how are those boxes staying up in the air, anyway? – but you have to peek through the trees and look carefully, to see it.

Put simply: This is not the sort of building people will fly across the world to visit. But if you go, it will reward your attention with subtlety, beauty and rich experience.

What’s remarkable is the very smoothness of the building: Its exterior is seamlessly detailed, hardly a latch or duct to be seen. (Provencher Roy deserves credit for the quality execution of this complex and inexpensive building.) The outer surfaces catch the shadows of the nearby hardwood boughs; from the splash pad or playgrounds a few steps away, the building almost disappears.

But it is strongest in speaking to the street. Grande Allée, Quebec’s major avenue, is now lined here with residential buildings; but Ouellet imagines this as one day creating “an arts quartier,” fed by the museum’s prominent displays of contemporary art. 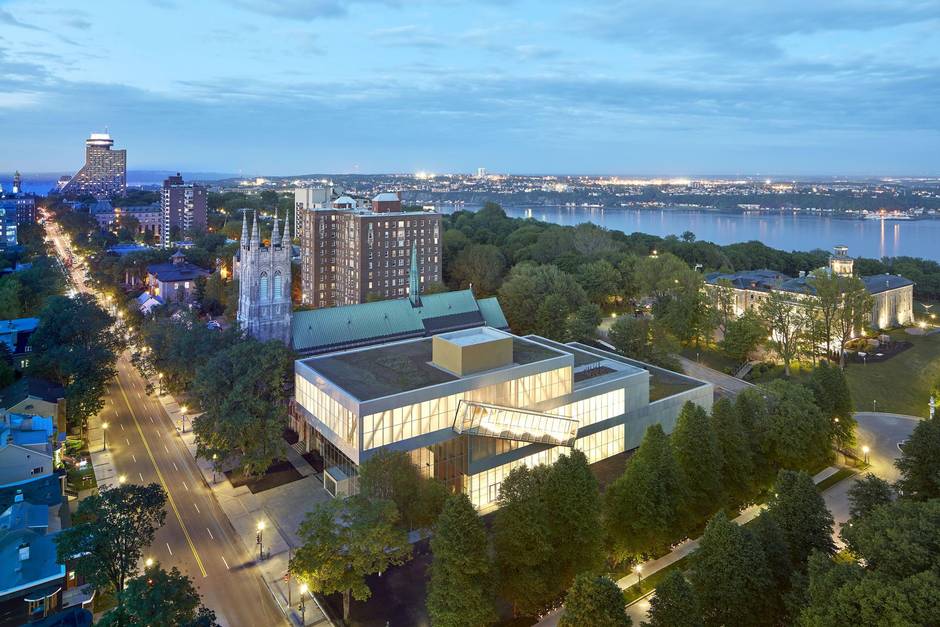 The building's exterior is notably smooth, hardly a latch or dutch to be seen. (Bruce Damonte)

This is the sort of ambition that the building is more likely to resolve than the other goal, hinted at by Ouellet and provincial officials, of increasing tourism to the city. There is a tension here: the museum’s mission is proudly provincial. “At a time when museums are being globalized, we appreciate the local specificity of the collection,” Shigematsu argued.

Ironic praise from the Japanese-American partner in a Dutch-based, globe-spanning architecture firm. But it may be that, in trying to engage with a global conversation about museums, MNBAQ has built itself a very fine building to serve its local community and those tourists who make their way here. On the museum’s official opening, Quebec’s Fête Nationale June 24, crowds lined up for hours to visit. Pierre Lassonde himself was in the crowd, largely unnoticed and looking anxiously pleased as excited museumgoers – young, old, the ones I spoke to all locals – engaged with the new treasure that the global discourse of architecture and aspiration had dropped in their city. It glittered.

Major Toronto project in the works for OMA

The Lassonde Pavilion is OMA’s first work in Canada, but another major project is in progress: Shigematsu and OMA New York are leading the master plan for the former Unilever site on the eastern fringe of downtown Toronto. Developers First Gulf are proposing 12 million square feet of mostly office and retail space for the site, which is nearly 60 acres and could be served by a proposed new subway line, regional express rail.

The proposal tracks quite closely with a study by OMA back in 2013, for Waterfront Toronto, which imagines the site as a “Transferium,” a multi-modal transit hub and dense employment centre. This proposal is still far from being realized, but the vision is shaping up along the lines of OMA’s scheme – including a mid-June announcement that GO Transit is proposing a regional-express rail station on the site.