Ziggy Wisniewski’s earliest memory is of a sunny morning in 1958, when he was four. Light was pouring in the door of the beloved barn on his family farm in Jerseyville, Ont., as his father hooked up a pair of workhorses. The farmer effortlessly hoisted his son up onto one of them and led the team out to the fields: Little Ziggy’s legs stuck straight out across the horse’s broad back as he held tight to her mane, excitement and pride pushing fear from his mind.

“The barn will always stand in my memory,” Wisniewski says. “You go in the barn and all your problems go away. Time stands still.”

Built around 1850, the barn was used by three generations of Wisniewskis and figures largely in family lore. Ziggy reminisces about goofing around with his little brother Ron as kids, daring each other to climb up the ladder to the top of the haymow and walk across a beam nine metres above the pigs and cows. Ziggy’s sister-in-law, Marti, recalls plunking her two young sons in a pen to play with a baby cow while she and Ron, her late husband, did chores. 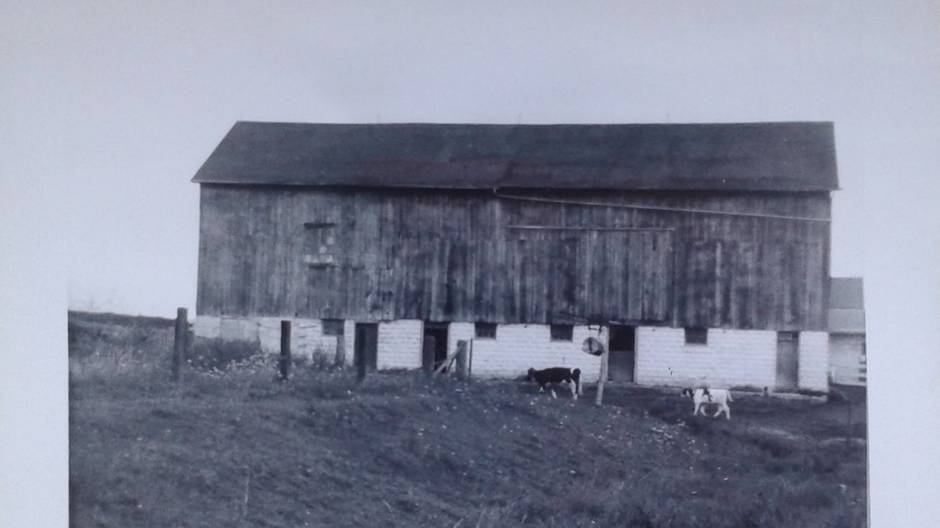 In 2011, the Wisniewskis sold their family barn, which was built around 1850 and no longer in use, to April and Andy Hershberger of western Pennsylvania.

“I had so many good times in the barn with my husband, the kids and the animals,” says Marti. “There’s something very special about that barn. It’s where life was.”

Today, 600 kilometres away, another pair of brothers is climbing up the ladder. But the boys aren’t teetering on a beam – they’re chasing each other across a newly constructed catwalk. In 2011, the Wisniewskis sold the barn, which was no longer in use, to April and Andy Hershberger of western Pennsylvania; last year, the Hershbergers finally moved it to their 300-acre tract and transformed it into a beautiful family home. The couple and their sons, ages 2 and 5, moved in this summer.

“You can’t touch the kind of character and authenticity that comes with a barn,” says April Hershberger, a homemaker and Etsy dealer. The couple are fans of all things retro (they collect and restore vintage Airstreams), and were thinking of integrating antique timber into a more traditional house before deciding to purchase an intact barn frame. 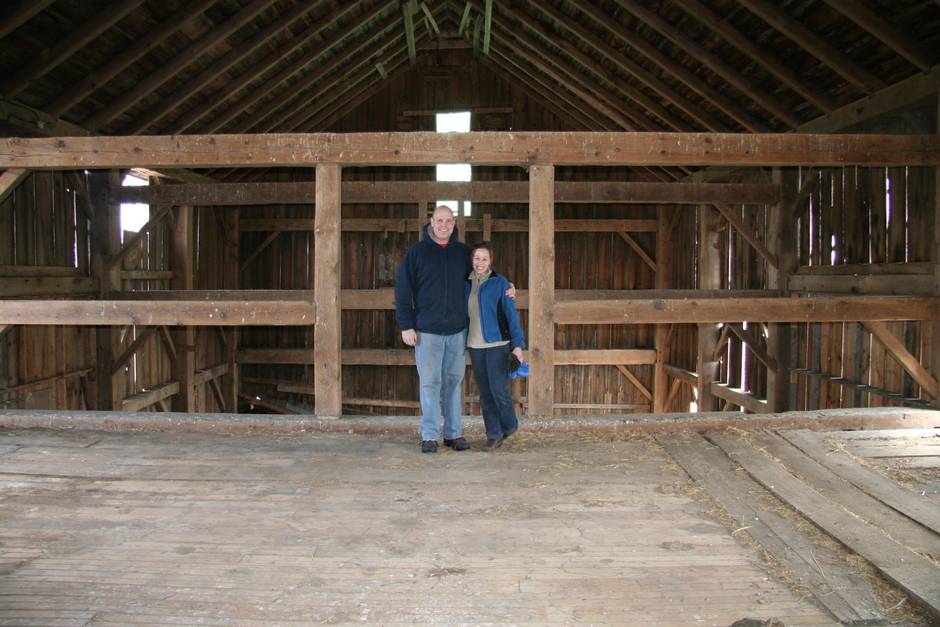 To find one they turned to Dale Lehmer of Antique Woods and Colonial Restorations. The 71-year-old has been deconstructing and reusing old barns since the 1970s, when putting up weathered barn siding in family rooms was all the rage. “There’s a lot of romance and nostalgia involved with barns,” says Lehmer, who lives in St. Lawrence County, N.Y., in a barn with soaring cathedral ceilings sourced from Guelph, Ont. “They’re like living art.”

Lehmer estimates he has taken down well over 1,500 barns across North America, some 200 years old. About a third of the frames go back up, while wood from structures that can’t be saved because of rot or damage is used for parts and furniture. For every barn from the U.S., he gets eight to 10 from Canada. The cost of purchasing a frame from Lehmer ranges from $25 to $40 (U.S.) a square foot; the cost of putting it up is between $30 and $40 a square foot.

The Jerseyville barn, on the outskirts of Hamilton, is one of about 50 from Canada that Lehmer has transformed into houses in America. “The barns in Canada tend to be really spectacular compared to the barns in the United States,” he says. “By spectacular, what I’m talking about is larger timbers. You walk in and see these huge beams – it’s a much more powerful statement.” 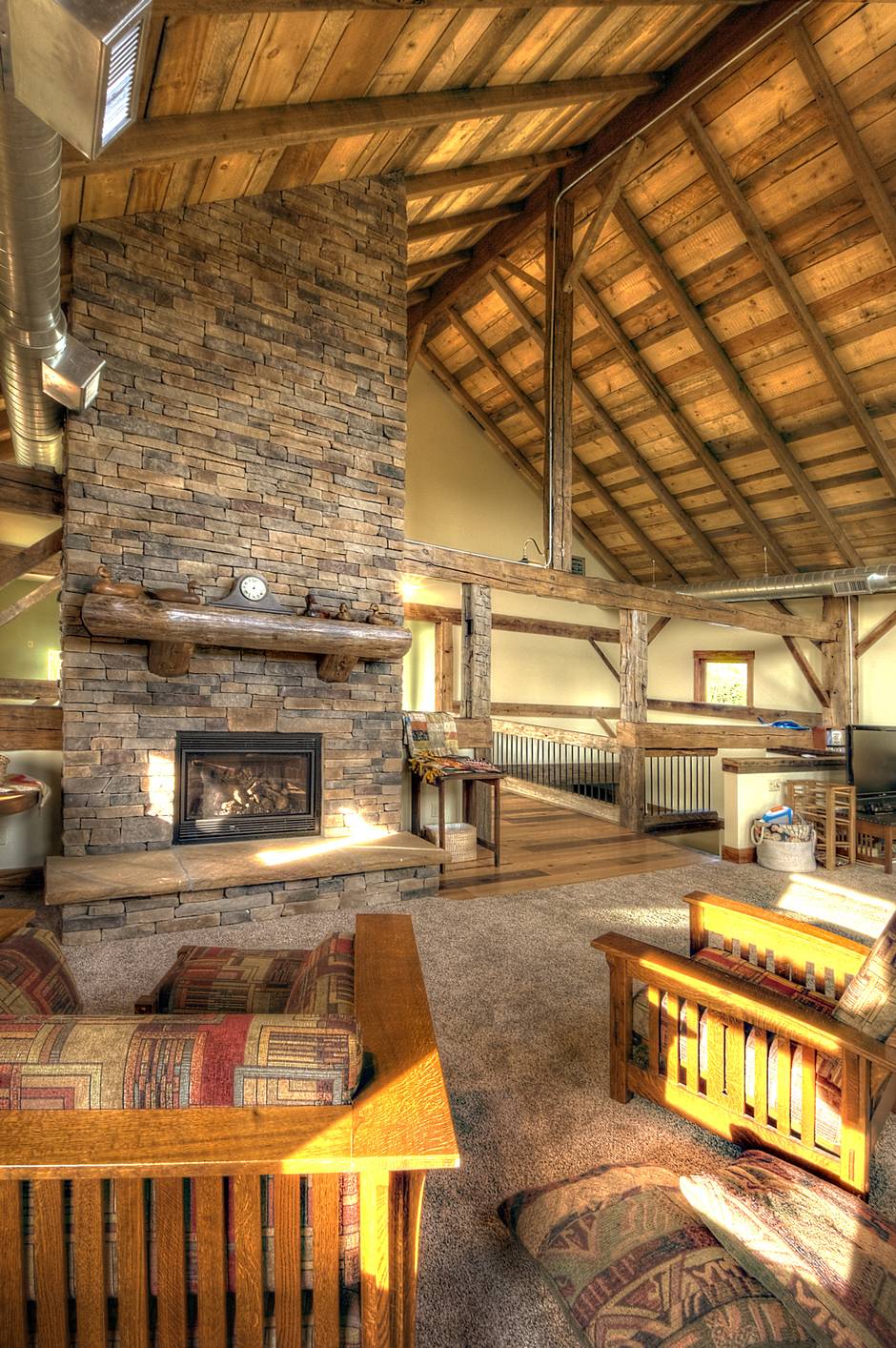 For 165 years, the barn sheltered livestock in Jerseyville, Ont - now it's home to April and Andy Hershberger western Pennsylvania. (Courtesy of April Hershberger)

A combination of aesthetic and engineering factors make a barn a good candidate for conversion. The Jerseyville barn, for example, features 60-foot rafter plates and 12-by-12-inch posts made primarily of hand-hewn white pine, Lehmer’s favourite type of wood. Side walls of 16 feet or higher allow for tall ceilings, as well as second- and third-floor loft options. “The old-timers came up with such great timber-framing skills, it’s just amazing,” he says. “They worked with love and that’s what you see. That’s what gives these structures soul.”

In the four decades Lehmer has been in the barn business, he has seen the taste for weathered wood expand beyond country homes to celebrity estates and stylish eateries. He has supplied wood for Robert DeNiro since the 1990s, when he scoured New York state for barns using the actor’s private plane. He’s put up a collection of barns on the Oscar winner’s property, and some of his finds have been used in DeNiro’s New York City restaurants.

The tall timber aesthetic is timeless and transcends trends, Lehmer says. Those who live in full barns make them modern through decorating with metals and other contrasting materials, while squeaky clean new houses can add character and charm by using patinated wood for furniture, staircases and flooring. 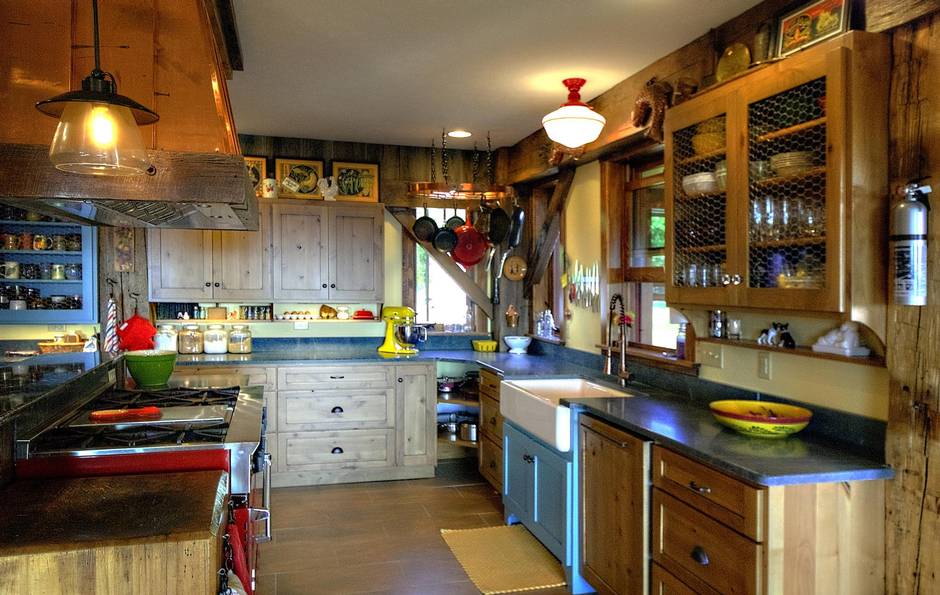 April Hershberger designed a floor plan so that the frame wouldn’t have to be modified.

To secure superior Canadian frames, Lehmer works with Gary Edwards of Uxbridge, Ont., who scouts barns around the province and takes them down.

“After finding a barn, I spend hours in there examining it, in awe of the craftsmen and their abilities,” says Edwards, who also rebuilds barns for Canadian clients. “The old patina, the worn boards – there are textures that have built up over 100 years.”

The duo’s most impressive collaboration can be seen at Big Cedar Lodge, a luxury wilderness resort in Missouri, where a series of Ontario barns have been transformed into a shooting range, clubhouse, golf pro shop and welcome centre. Lehmer is currently preparing two more barns to go up at the resort.

It took Edwards and his crew two weeks to dismantle the Jerseyville barn. He carefully labelled each piece with an engraved aluminum tag indicating its place and purpose. A diagram and several photos helped complete the puzzle. The wood was then loaded onto one flatbed tractor-trailer and moved to Lehmer’s shop for cleaning and repairs. The actual barn raising took a week, including resurrecting a second one from Prince Edward County, Ont. to be used as the Hershbergers’ garage. 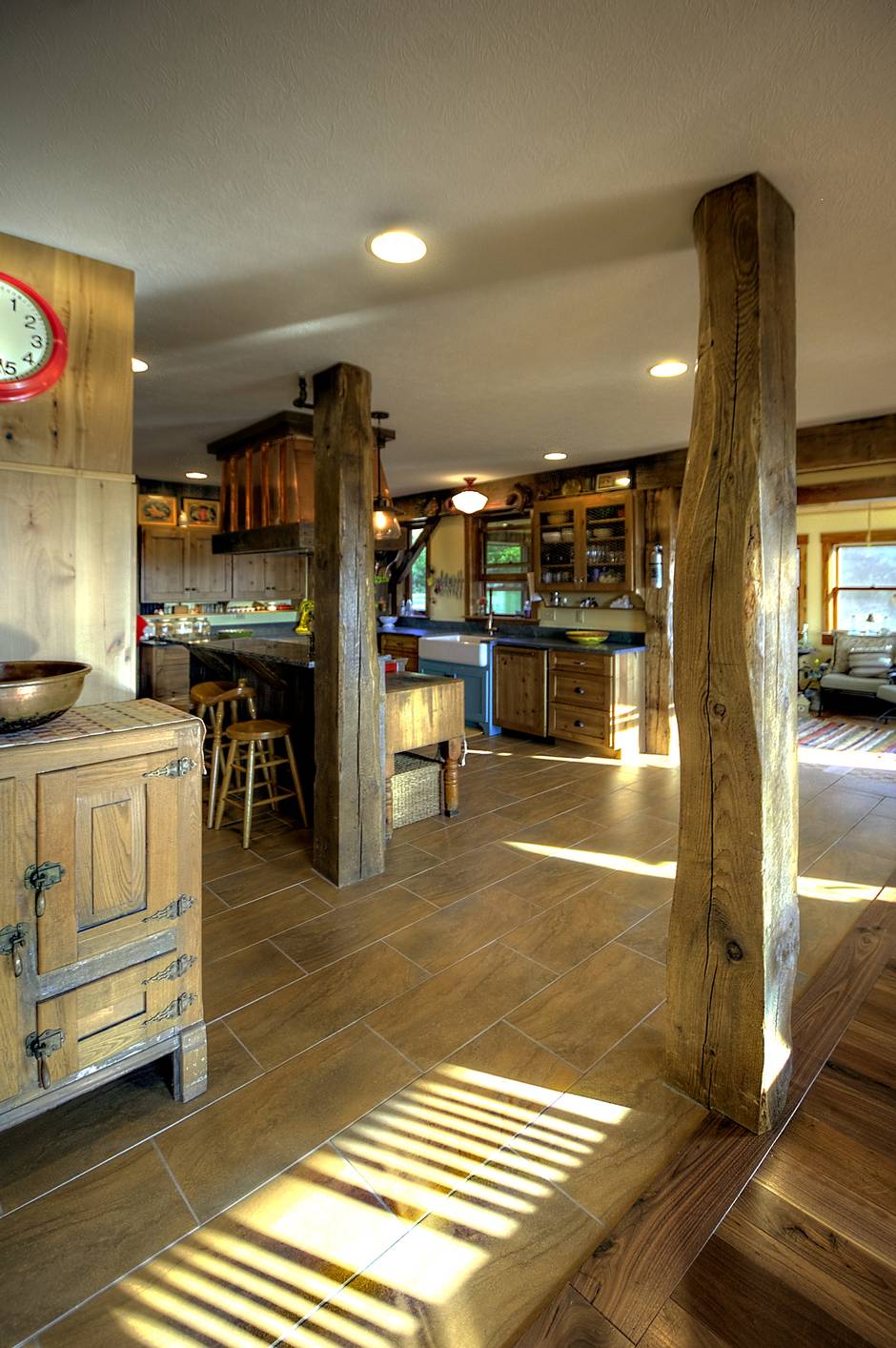 'The history is what makes this place so special,' says April Hershberger.

April Hershberger designed a floor plan so that the frame wouldn’t have to be modified. The result is a stunning open-concept house on top of a ridge in the Appalachian Mountains, with a seven-foot-by-seven-foot window that looks out on Mount Davis, the highest peak in Pennsylvania.

The house features an impressive great room with a 30-foot fireplace and a third-floor loft that offers an up-close look of the rafters. A vintage Crown Mason jar that Hershberger found in the barn when she visited Jerseyville is on display, filled with original square-head nails pulled from beams. “The history is what makes this place so special,” says Hershberger, adding that pitchfork marks and engraved initials can be seen on some beams. “We love anything with a story.” Bathroom tiles with a maple-leaf motif pay tribute to the barn’s Canadian roots.

Marti Wisniewski hopes to visit at some point. “It is spectacular what they’ve done,” she says, having followed the barn’s progress on Facebook, where Hershberger posted more than 500 photos. Marti has hung on to a few keepsakes, turning some of the old wood into flooring and a mantelpiece in the farmhouse, where she still lives. “When you’re the third generation on a farm, you want to hold on to every bit of history that’s there. I’m so happy the barn lives on.” 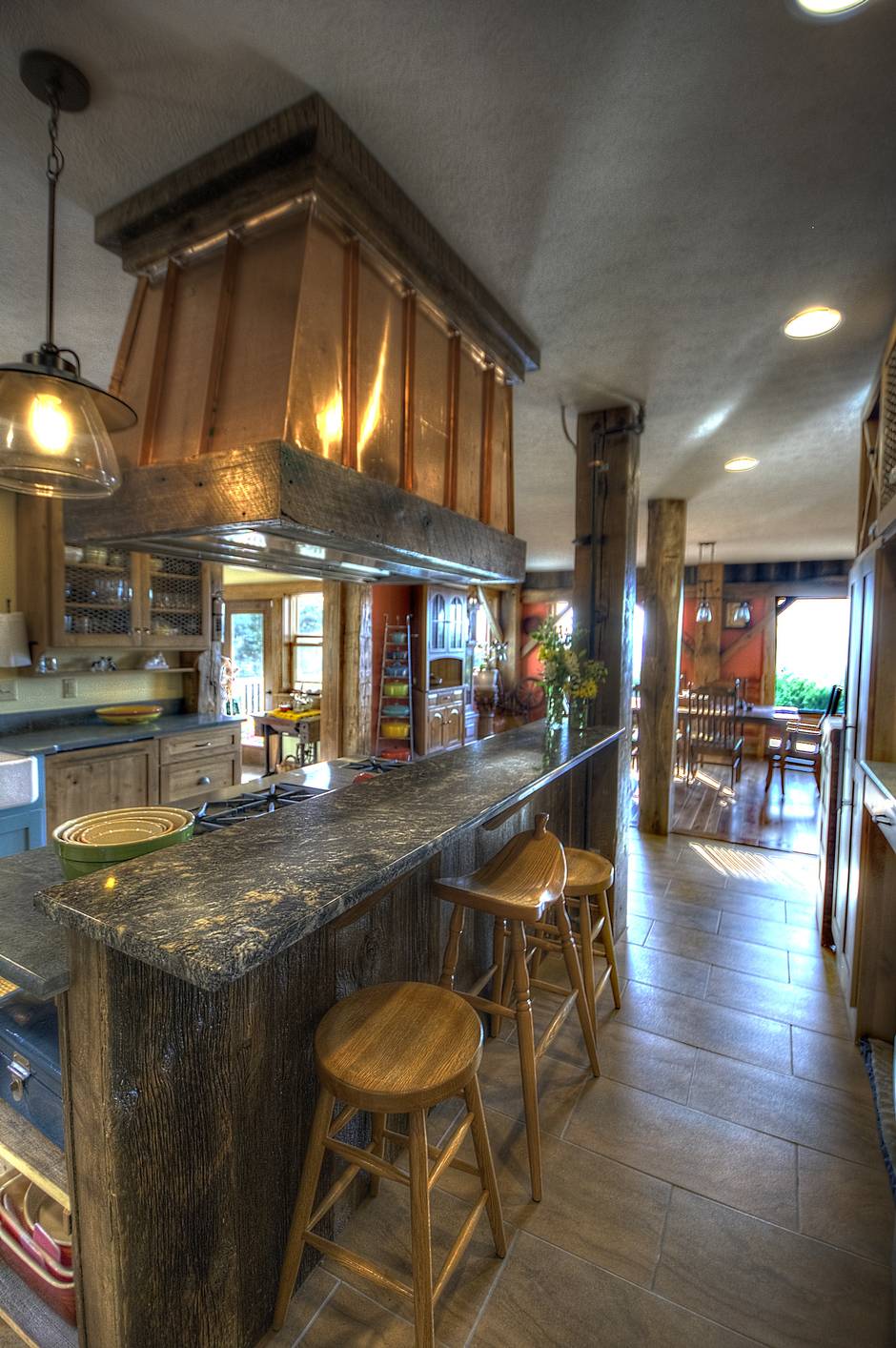 To find the barn that would become their home, the Hershberger turned to Dale Lehmer of Antique Woods and Colonial Restorations. The 71-year-old has been deconstructing and reusing old barns since the 1970s,

Born of the barn

Not everyone has the space or inclination to resurrect an entire barn. For just a touch of the farm aesthetic, consider an accent made of antique wood. These pieces are by Toronto-based Rebarn, which ships across the country. 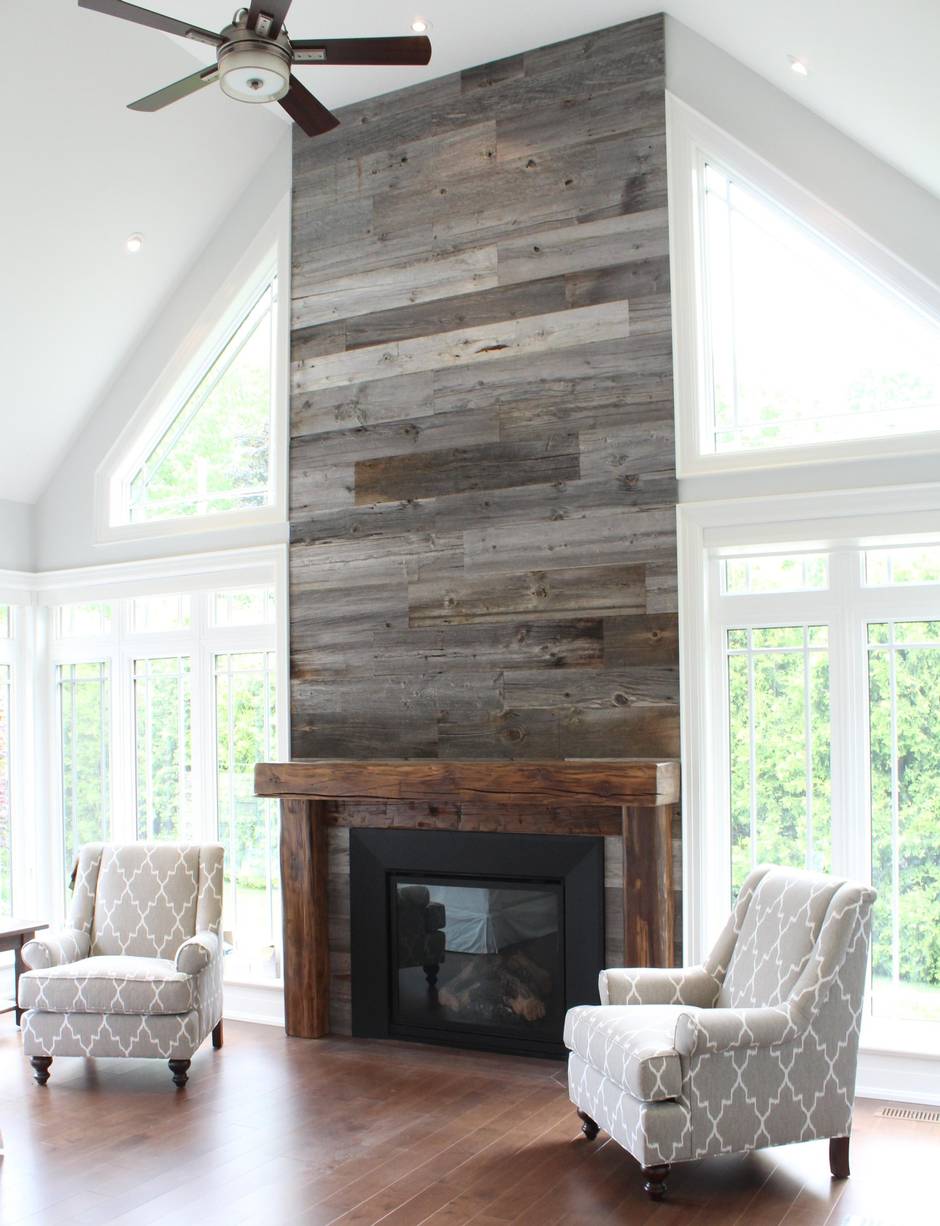 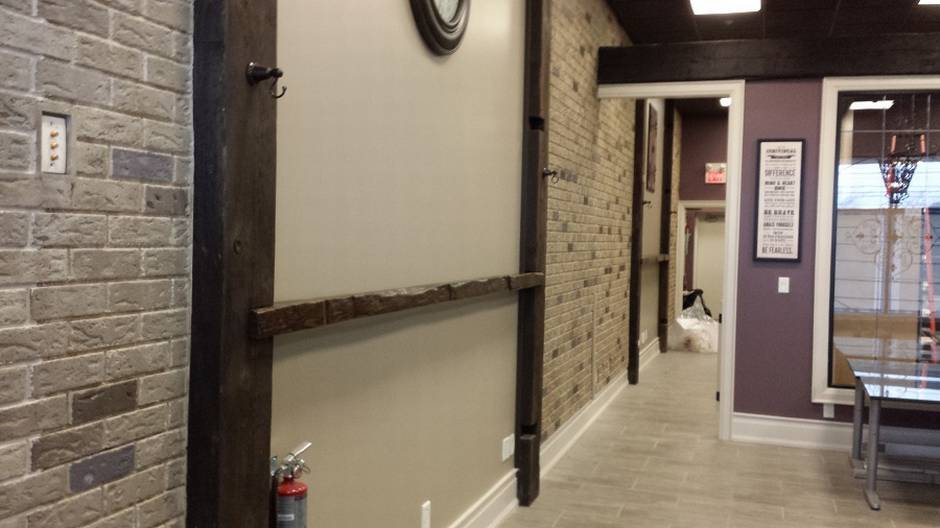 Old barn flooring made of hemlock and pine can be revamped nicely, while ash or oak beams resawn into lumber produce extra-wide floor panels. Grey barn siding is also popular and makes for panelled ceilings and accent walls. 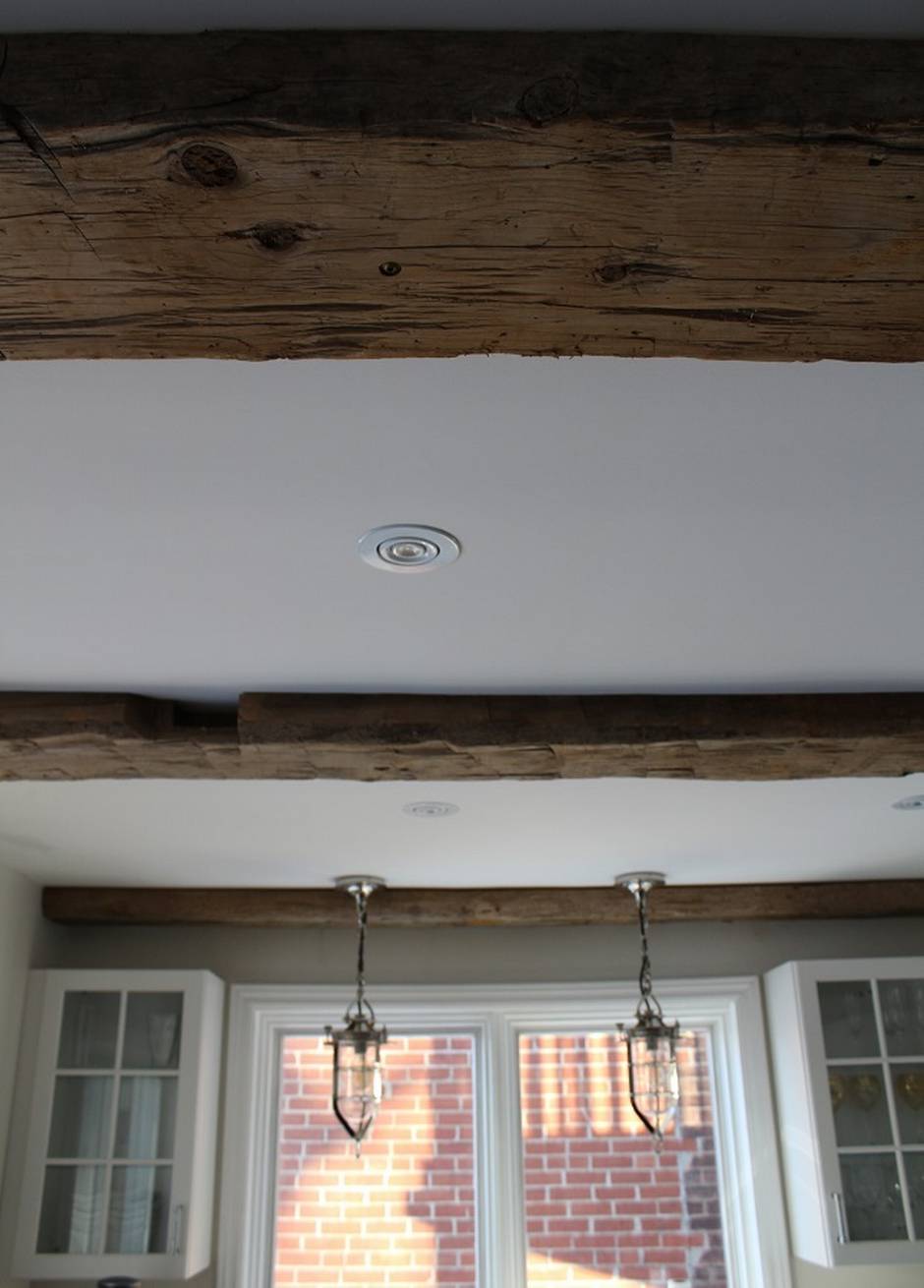 They don’t offer support, but they make a statement. Rustic posts and beams can be used to finish a room; antique wood can be added to the ceiling to recreate rafters. 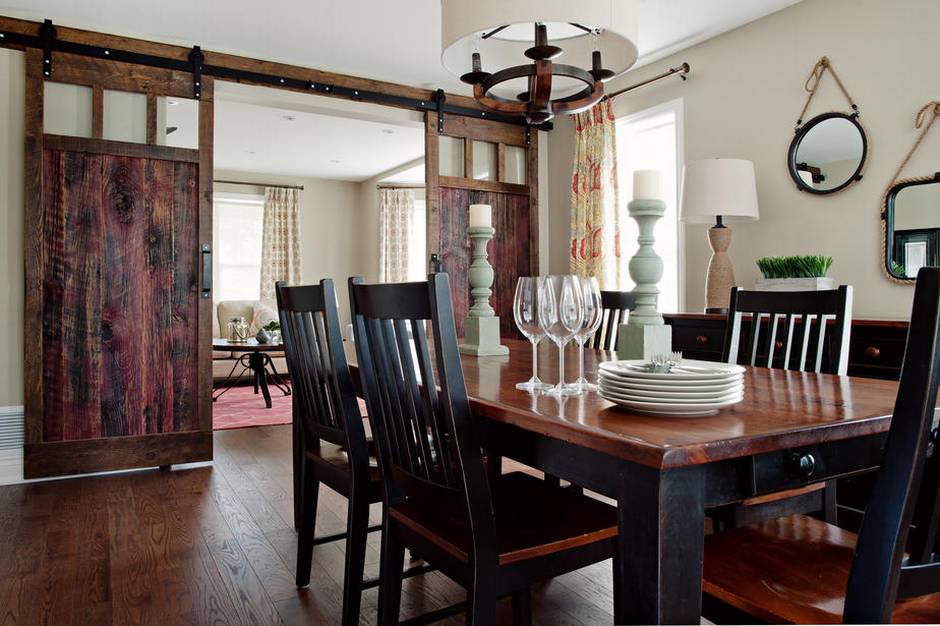 Sliding barn doors are ideal where swinging doors run the risk of interfering with furniture and feng shui. Refurbished originals or new creations using antique boards are both options.