The world-wide vogue for architectural preservation has never stopped changing at any point in its long and fascinating history. Within the living memory of today’s pensioners, for example, only the mansions of our betters and the most august public monuments were popularly deemed worthy of salvation from modernity’s wrecking ball. Now, after just a few generations of consciousness-raising by heritage activists, every old warehouse, cottage, Victorian brick and Edwardian plank, and even some relics of modernism, can find numerous vocal defenders among citizens at large and in the bureaucracies of municipal and other governments.

But the usual concern of preservationists, whether old-fashioned savers of palaces or newer-fangled guardians of factories and vernacular dwellings, has always been the material fabric of the antique building in question, not the program that originally shaped it. Architectural conservationists have traditionally counted it a victory, for example, when the concrete bones and workaday stylelessness of an old warehouse survive its conversion into a stack of condominiums. Unless a local historian takes an interest, however, the overhaul will likely erase all traces of the warehouse’s life in its industrial heyday –

the story, in other words, of the technical processes and the human sociabilities for which it was once the setting.

But is there a visually evocative way to preserve the story, as well as the stuff, of a building that has outlived its program? Can contemporary architecture incorporate a recycled structure in a way that allows it to say something about its history – not merely in words on a commemorative plaque, but in the language of three dimensions? 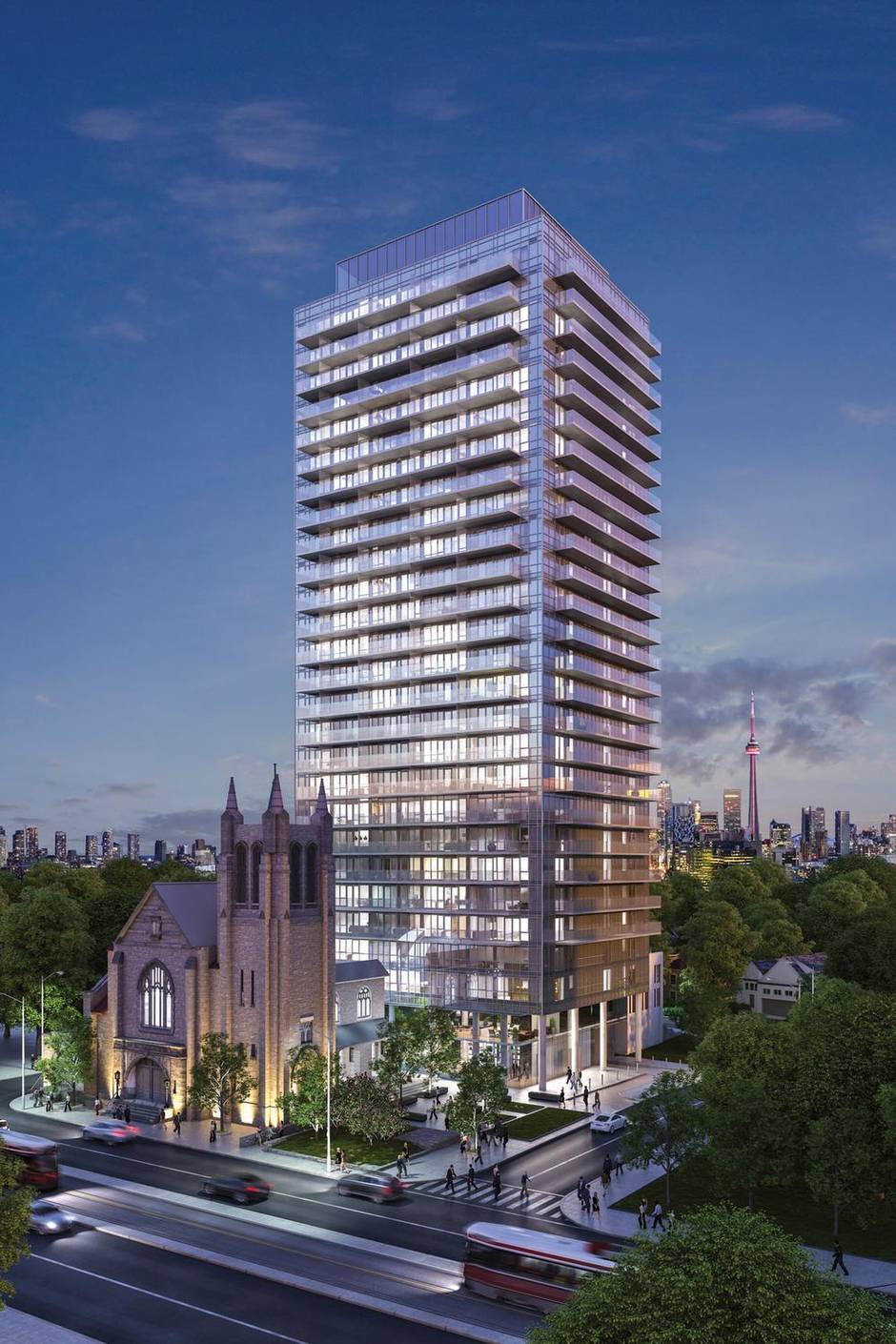 Toronto architect Don Schmitt, co-founder of the well-known firm Diamond Schmitt Architects, believes he has come up with some answers to these questions in his scheme for Blue Diamond, a new residential project by Camrost-Felcorp on St. Clair Avenue West, a few steps east of Avenue Road.

The challenge for Mr. Schmitt was the disposition of a cherished, picturesque Gothic-revival building, the former home of Deer Park United Church, that occupied much of the site designated for high-density development. Given the architectural protectiveness that informs much of Toronto’s official and popular thinking about the past, wholesale demolition of the structure was probably never considered seriously by anyone. Which it shouldn’t have been, since neo-Gothic styling of houses and churches is as much a part of Hogtown’s visual identity as the CN Tower. 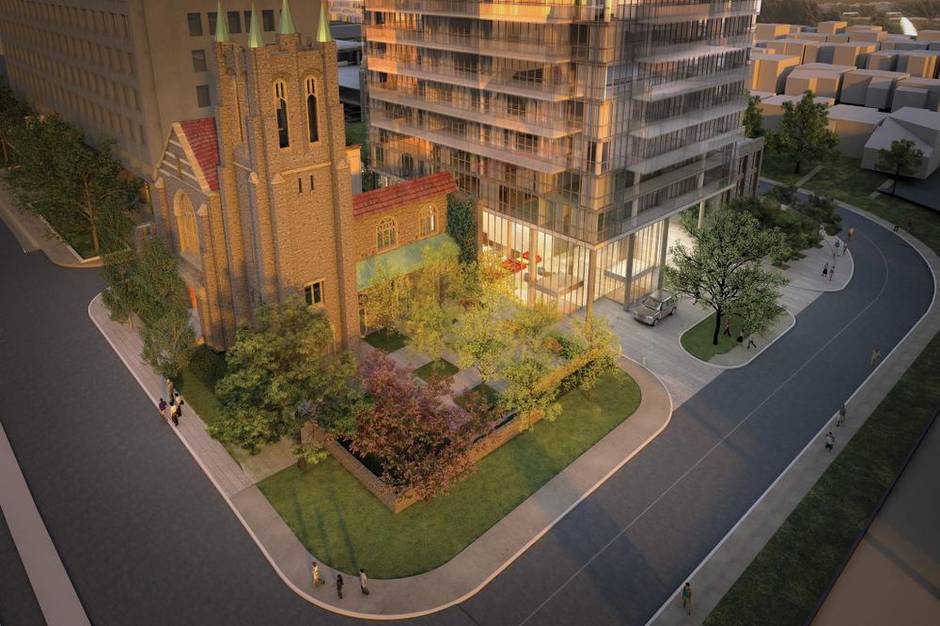 But room had to be made on the small plot of ground for a condo tower, and also for a half-dozen townhouses on little Foxbar Road, which is lined by low-rise residences. Mr. Schmitt’s design aims to satisfy the various parties with interests in the site, including the owners, neighbours apprehensive about losing a local landmark and Toronto’s other heritage-minded citizens.

If everything unfolds according to plan, the developer and home-hunters will get a glassy 28-storey tower Mr. Schmitt described to me as “discreet, quiet and simple.” Its south-facing units will enjoy wonderful views over the downtown core. Amenities at Blue Diamond will be minimal, but residents will have access, via a tunnel, to the spacious fitness and recreational facilities at Imperial Plaza, the condo block next door.

For their part, neighbours, passersby and aficionados of Hogtown neo-Gothic will have the tall belfry and steeply pitched streetside entrance of the church, which will be left standing where they have been since the building went up in 1913. 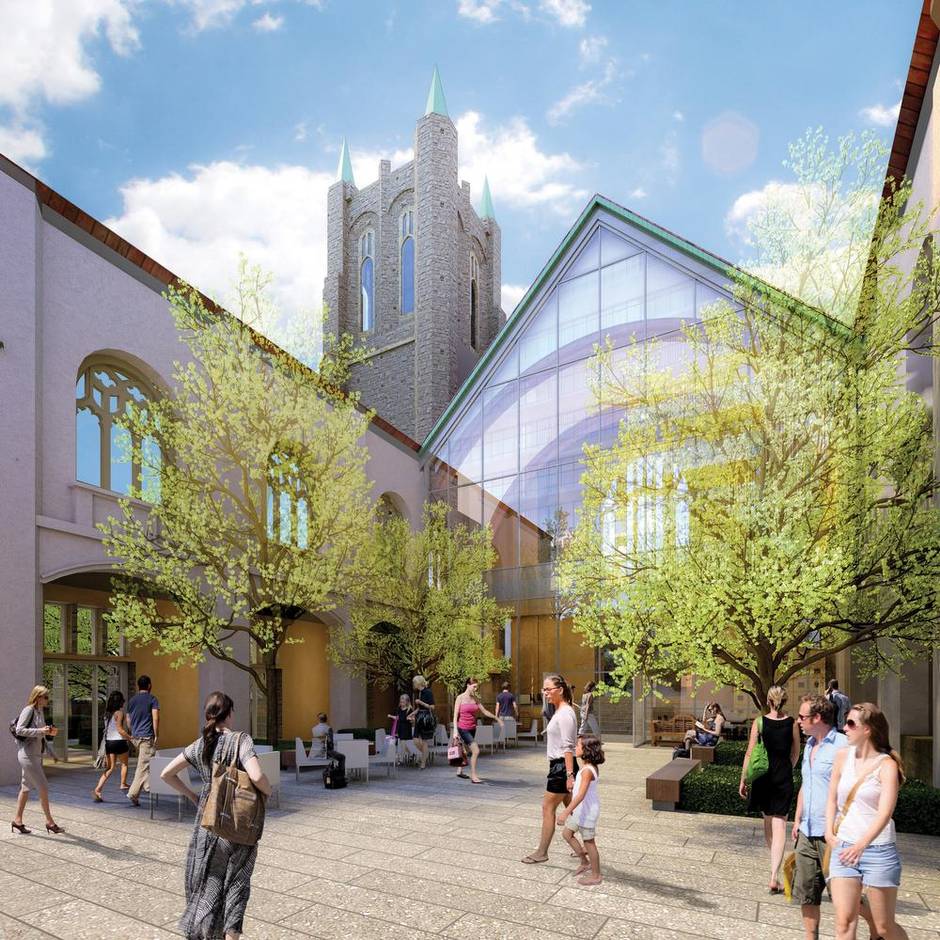 Given only a glance, this move could be dismissed as merely another instance of the cheapskate, pseudo-preservationist tactic sometimes called “façadism.” But what Mr. Schmitt proposes to do is more interesting than that. The interior behind the façade, the architect told me, will be deep enough to accommodate a café, and the structure will offer a suitably impressive entry to an open-air public courtyard. This little garden, to be landscaped by Janet Rosenberg, will be created by removing the roof from the nave, while leaving the church’s exterior walls, east and west, to enclose and frame the space, which will open south toward the large ground floor of the tower. 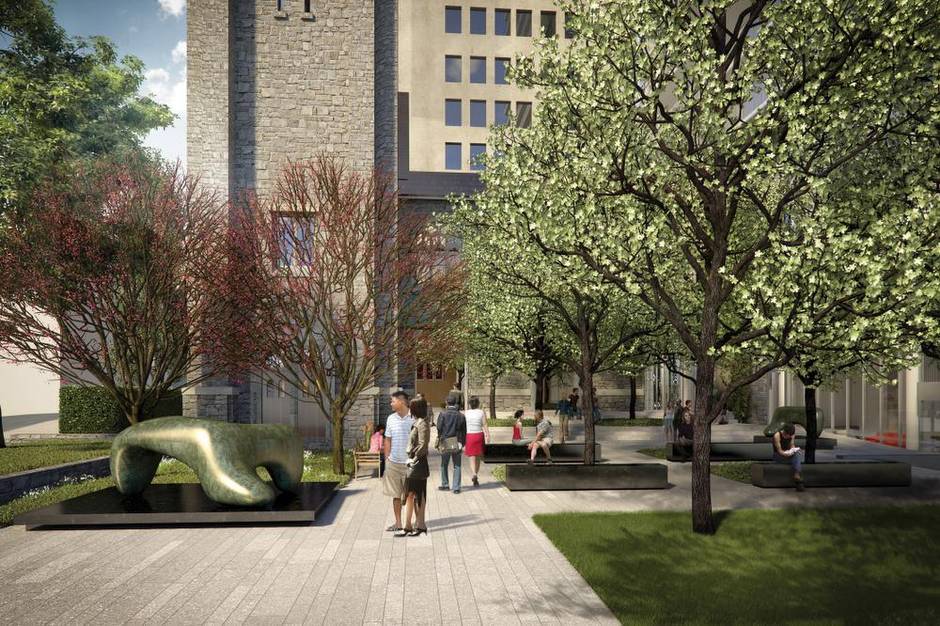 But Mr. Schmitt intends this place to be something more than a gracious gesture to people who appreciate Toronto’s treasury of revival architecture. Properly seen and understood by the public, he told me, it will become a site of meditation, exchange and communal gathering – a contemporary expression, in other words, of the community-building done by the people who worshipped on this spot for almost a hundred years.

If the architect’s objectives are met, we may discover that preservation, at its best, can indeed be about more than saving old buildings from bulldozers. It can also recall the spirit of a place, something of the spiritual and creative energy that originally raised the structure’s rafters and walls.