In Toronto's moneyed suburbs, most new houses are big, stone-faced and imposing. But a recently built home in Wanless Park makes a different sort of statement. It is a bungalow, like its 1950s neighbours, but it has a face of clean concrete, black aluminum-framed windows and a dash of white oak.

The owners, a husband and wife with two children, lived in the original house for years, and when they commissioned a contemporary home by Vancouver designer D'Arcy Jones, they ignored the conventions of high-end real estate in the city, including the tendency to go big. "The neighbours ask, why did you tear your house down to build the same house?" one of them says with a laugh.

On the inside, no one would make that mistake. The house holds surprises. You step up onto a covered porch, then turn left into a foyer lined with rich grey basalt tile, artfully framed windows and a wall of white oak. Turn right, through a narrow passageway, and the house's interior balloons – the ceiling soaring up to a tent-like form with skylights at the top, a glassy wall beyond, angular hunks of wall and woodwork billowing upward and outward. Despite its outward modesty, this is a thoughtful work of architecture, conceived in three dimensions and fitted into a tight package.

Mr. Jones says he simply wanted the house to serve its owners, and to respect their desire for a contemporary building that suited their specific needs. The point was "the elegant lining of the bungalow, where this family will spend so much time," Mr. Jones says; this trumped any desire for him to put a bold face on it. "In the end, we didn't raise the house's roofline one inch. But the interior is extremely expansive and airy."

That's because the hipped roof of the building, which looks "banal" on the outside, also shapes the ceiling inside. The inside of the roof is clearly expressed, and Mr. Jones has juxtaposed it against some simple rectangular rooms below. "The core of the house has this free-flowing, what-the-hell complexity," he says. "It might be Gehry-like at first glance, but it came from very prosaic motivations."

Prosaic? The clients and Mr. Jones speak about the house in down-to-earth terms. "I wanted a house that works for what we need," the wife says; she lists well-configured linen closets and a master bath that has just one sink. (Who needs a second sink? Good question.) "Everything here," she says, "is about what we want and how we live."

The 2,500-square-foot building seems very liveable. The living room and kitchen (not too large, with room for a piano) are at the rear, accented by anodized bronze windows and doors that offer views of the backyard landscape. A home office sits in the middle; and three modest bedrooms are tucked down a secondary hallway, along with lots of storage, the stairs to the basement and a dog shower. According to the client, the layout works perfectly for their family.

All this reflects the combination of service and art that goes into any house commissioned from an architect. It's clear that Mr. Jones took small requests from his clients seriously. Yet the design ideas speak more powerfully. The house's interior is dominated by three materials: drywall, basalt tile and rift-cut white oak. "D'Arcy said: One tile. One faucet. One kind of wood," the client recalls. "And it works. It's as simple, as minimal, as we could get."

The oak flooring matches the panels on the walls, which cover zones of the ceiling and fold down onto the walls. And wherever these materials meet, there are narrow, sharp cutouts – "reveals," in the jargon of architecture. These are clean lines between different zones of the walls, enhancing the geometry of the space in a composition that's beautiful, complex, but also subtle. The details, finely built by Derek Nicholson Inc., all speak clearly and harmoniously.

Mr. Jones calls this Abenbare House, borrowing the Danish word for "gap" or "reveal." In his view, the house's small "reveals" speak loudly – the small ones that make art out of a simple wall slab, and larger gaps that circle the foundation of the house, bringing light into the below-ground areas. All these help reveal the design potential of a familiar house form.

There's a lesson in that. Mr. Jones lives and works in B.C., and the clients hired him after reading about some of his work there – which builds on the unbroken, 60-year tradition of modernist houses in that province.

In Toronto, where modernism landed later and more modestly, there is a different historical context. The great 20th-century innovations in housing – open floor plans, strong connections to the outdoors, and forms and details that are cleanly geometric – came to Toronto in the 1950s, in the toolboxes of ordinary builders. The family's old bungalow was a product of this diluted, mainstream modernism. Their new house shows how much life is left in the old modernist ideal, and how interesting it can be to make it new.

Editor's note: D'Arcy Jones is an Intern Architect with the Architectural Institute of British Columbia. An incorrect designation appeared in the original print and online versions of this story. 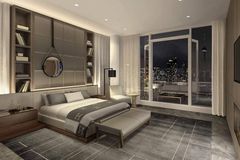 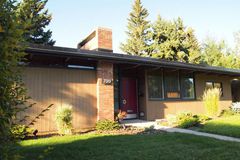 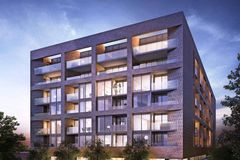