When Toronto's JCI Architects Inc. was invited by a private Bangladeshi developer to design a middle-income condominium community in a northern suburb of Dhaka, the young firm was faced with a problem that is all too familiar to planners and other citizens who want to see greater density in the Greater Toronto Area.

It's this: How do you bring residential concentration to a site (such as this one near Dhaka) that lies directly underneath the approach path of an important international airport? (We've got Pearson; Dhaka has Hazrat Shahjalal, Bangladesh's largest and busiest air hub.)

Are the areas around these facilities condemned to be forever carpeted by sprawl?

Of course, an ordinary skyscraper – the most obvious solution – is out of the question in such places.

But there's another way to tackle the issue.

Instead of pushing the tall buildings upright, you can tip the towers onto their sides, as JCI has decided to do in Bangladesh. This move lets skyscrapers do what they do best – provide dwellings that are safe and private, but compactly stacked in the landscape – while making them reach into the air no more than a few storeys.

The horizontal configuration of multiple living spaces is not new. Le Corbusier pioneered the form of the prone tall building when he did his hugely influential Unité d'Habitation residential block in Marseilles (1947-1952). And the designers of dwellings in Toronto's celebrated St. Lawrence Market neighbourhood put it to excellent use some 40 years ago. But JCI's Shobuj Pata complex (Bengali for "Green Leaf"), if built out according to the plans, could add an interesting page or two to the postwar history of this controversial housing type.

JCI's intriguing proposal has been devised by Jaegap Chung (principal in charge), project architect Derek McCallum and their colleague Sudipto Sengupta. The scheme's first phase features seven long, narrow, slightly curved structures, each 10 storeys tall and set down parallel to all the others. These buildings are meant to be differentiated by subtle variations of plantings on some facades and by the various kinds of trees placed in the park they stand in.

In terms of form, however, each block is very much like the ones beside it. The standard module contains four generously proportioned apartments per floor, each between 1,800 square feet and 2,000 square feet in area. Every suite is far longer than it is wide, a gesture intended to maximize the light coming in through the tall glass walls on the long sides. There are elevators for each 10-story stack of four-apartment clusters. Each of the seven long blocks comprises three of these modular stacks.

Put more simply: The total development is big – Mr. Chung estimates the population of the first phase alone could top 2,700 souls – but the architectural mass has been broken down into fine-grained, manageable bits with intimate entrances. Wholly absent, mercifully, are the long, impersonal double-loaded hallways we often find in condo slabs.

These suites are meant to be lived in by large families with servants, and, as far as I can tell, JCI's planning has been notably sensitive to the cultural needs and desires of white-collar Bangladeshis.

Though the divvying up of space in each apartment generally follows modernist open-plan precedents, for instance, the kitchen, in a nod to local tradition, is wholly enclosed. The climate is hot, people expect central air conditioning, so the architects have included it. (After an ecologically-minded fashion, that is: Mechanical cooling equipment is available for the warmest seasons, but it is supplemented by a simple system that pumps air deep into the earth, where the heat is taken out of it, then pumps it back to the surface and into the units.)

The designers have also made a point of encouraging more natural temperature management by leaving open a light and air shaft, about 15 feet wide and running the length of each block. This interval between the two wings of each building enables cross ventilation during the months when the mercury is not off the charts.

The setting of the blocks is park-like, though these are hardly "towers in the park." (The lawns and gardens are actually parts of the green roof of the vast one-level parking garage, situated below grade.) A long allée, cutting right through the buildings at grade and lined with shops, daycare centres, an elementary school, a fitness studio and other community facilities, bisects the site of Shobuj Pata's first phase, helping make it a livable, walkable place.

Even if this very large undertaking is not completed in Bangladesh – it may not be moving forward – JCI Architects has produced a thoughtful and imaginative package of plans that are applicable anywhere height is not desirable or not possible, and where density of human fabric is called for.

Ontario’s architects gather in praise of good design
May 23, 2013 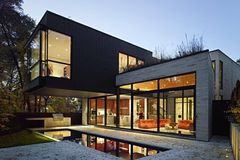 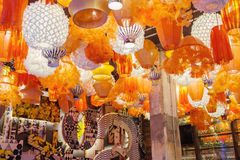 Boosters of tall buildings set sights on Toronto
May 9, 2013 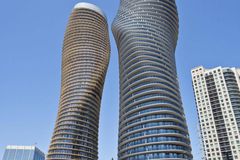