The house on Robinson Street is a black box. A finely crafted one, with wood-framed windows set off by dark-stained pine siding. Every detail has been considered, from the building’s unusual sideways orientation to its doorbell, which is slotted precisely into a slab of Douglas fir.

Located near Queen and Bathurst, the home is exactly what many affluent Torontonians want today: well thought-out in its plan and construction, unapologetically contemporary in its design language. Yet new houses like this are so rare as to be almost non-existent in the Toronto market.

That is where the company Modernest, who developed and built the Robinson project, comes in. Led by the local architects Kyra Clarkson and Christopher Glaisek, Modernest has completed four high-quality new houses, and are ready to deliver more as finished products. All featuring the same modernist vocabulary, they also share what Clarkson calls “a common language” of design details that are thoughtful but relatively affordable. 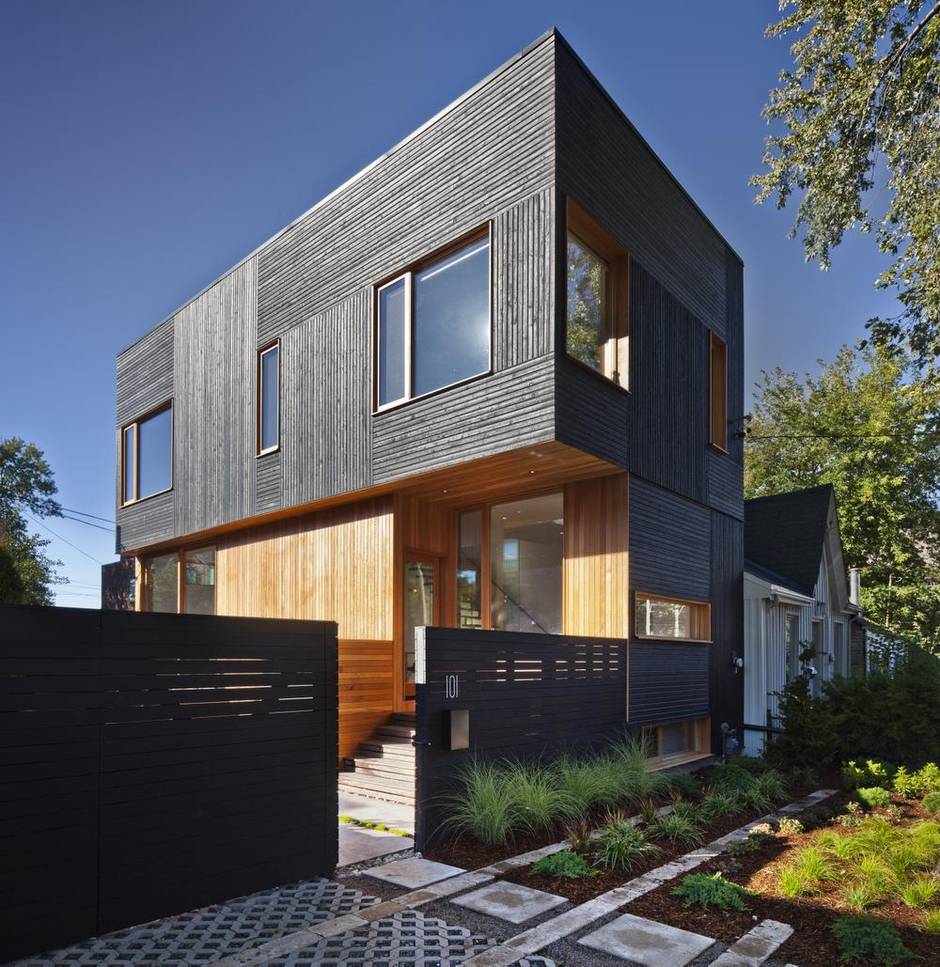 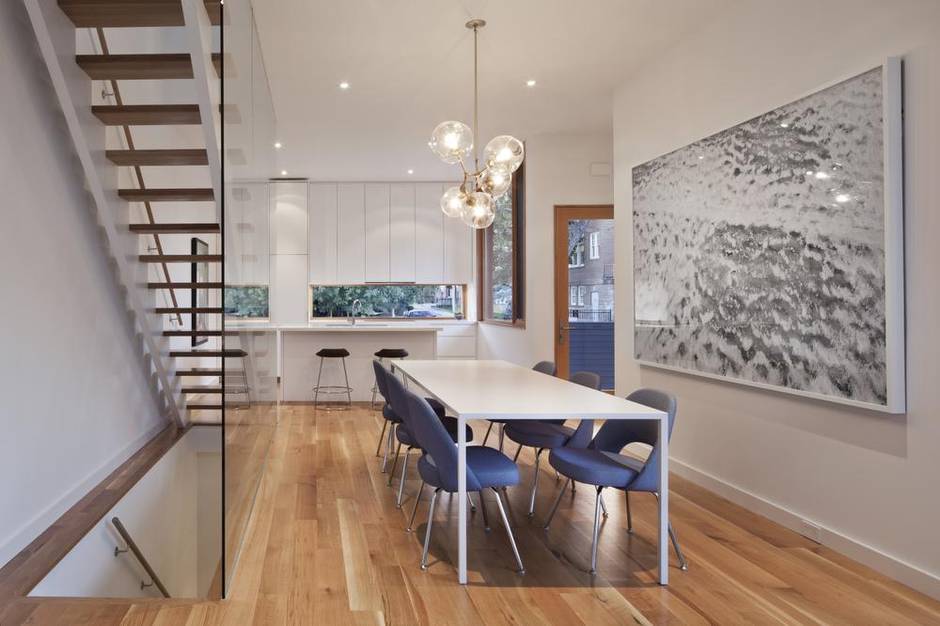 They are operating in a novel way, trying to bridge the divide between serious architecture and profitable development. “Our idea in forming Modernest,” Clarkson explains, “was to use our knowledge about the zoning process, our knowledge about construction, and our care for detailing, and pull it all together. And we’d take the financial risk as well,” she says with a small laugh. “It’s a big commitment.”

Their business model has shifted along the way – including one final surprise – but the Modernest project has led them to create some excellent houses, designed by Clarkson, that could set examples for other people’s projects. This includes the one on Robinson. To build it, they bought a semi-detached one-storey cottage. They tore it down and wound up with an oddly shaped lot – shallow, wide and wedge-shaped, with a fire station right behind it. Their design savvy transformed the situation. Clarkson designed the house to run down one side of the lot, creating an expansive side courtyard. The main door and a patio entrance (all fitted with custom doors) face this way. A row of cedars obscures the messy yards next door, and a fence with horizontal slats, stained black like the house, separates the courtyard from the street. A few small, high windows bring in light from the south while keeping the fire station hidden. 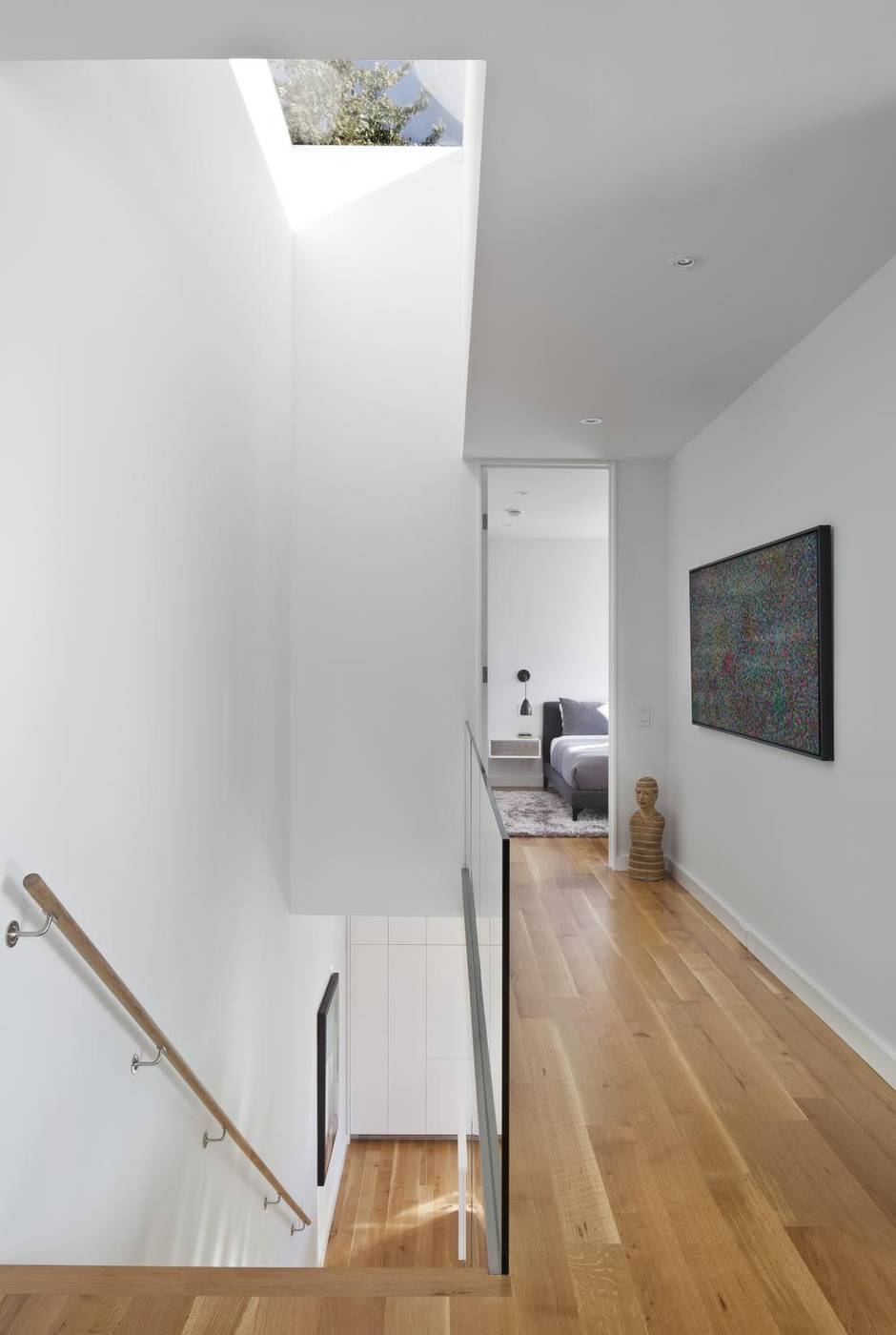 Inside, the 1,500-square-foot building is compact and crisply detailed, reflecting Clarkson’s experience designing under her own name and earlier for the highly esteemed New York firm of Tod Williams Billie Tsien Architects. (Glaisek has an influential day job as vice-president for planning and design at Waterfront Toronto.) The walls are drywall, the floor a relatively ordinary white oak hardwood, yet a few details elevate it above the ordinary. In the kitchen, which faces the street, there is a long narrow window in place of a kitchen backsplash. “This way, you can watch what’s happening,” Clarkson says. “It’s interesting to see what’s going on but to be a bit removed.” The stair is elegantly wrapped by a wall of glass that runs floor to ceiling, a minimal touch that looks simple, but is not. After you rise to the second level, it is capped by a large skylight that perfectly matches the size of the stairwell, opening the small house up to the sky and the sunlight.

As I looked closer I saw subtler details, the kind that require some care in the design and are usually seen only in multimillion-dollar, custom houses. There are no bulkheads, for instance. The ceilings are high and flat, while ducts are concealed in the walls and ceilings. Electrical outlets are placed horizontally, slotted sideways into the baseboards so as not to interrupt the clear planes of the walls. You might not notice these at first, but they contribute to a sense of refinement in the spaces, which are also well-proportioned and planned for flexible use.

Clarkson argues that such refinement will serve well over time. “A house is not a disposable product,” she argues. This is why the construction quality is also relatively high; they work with the builders Collaborative Ventures Inc., who deliver an exceptional level of detail, and the houses include such behind-the-walls features as insulated concrete forms for the foundation and in-floor radiant heating. 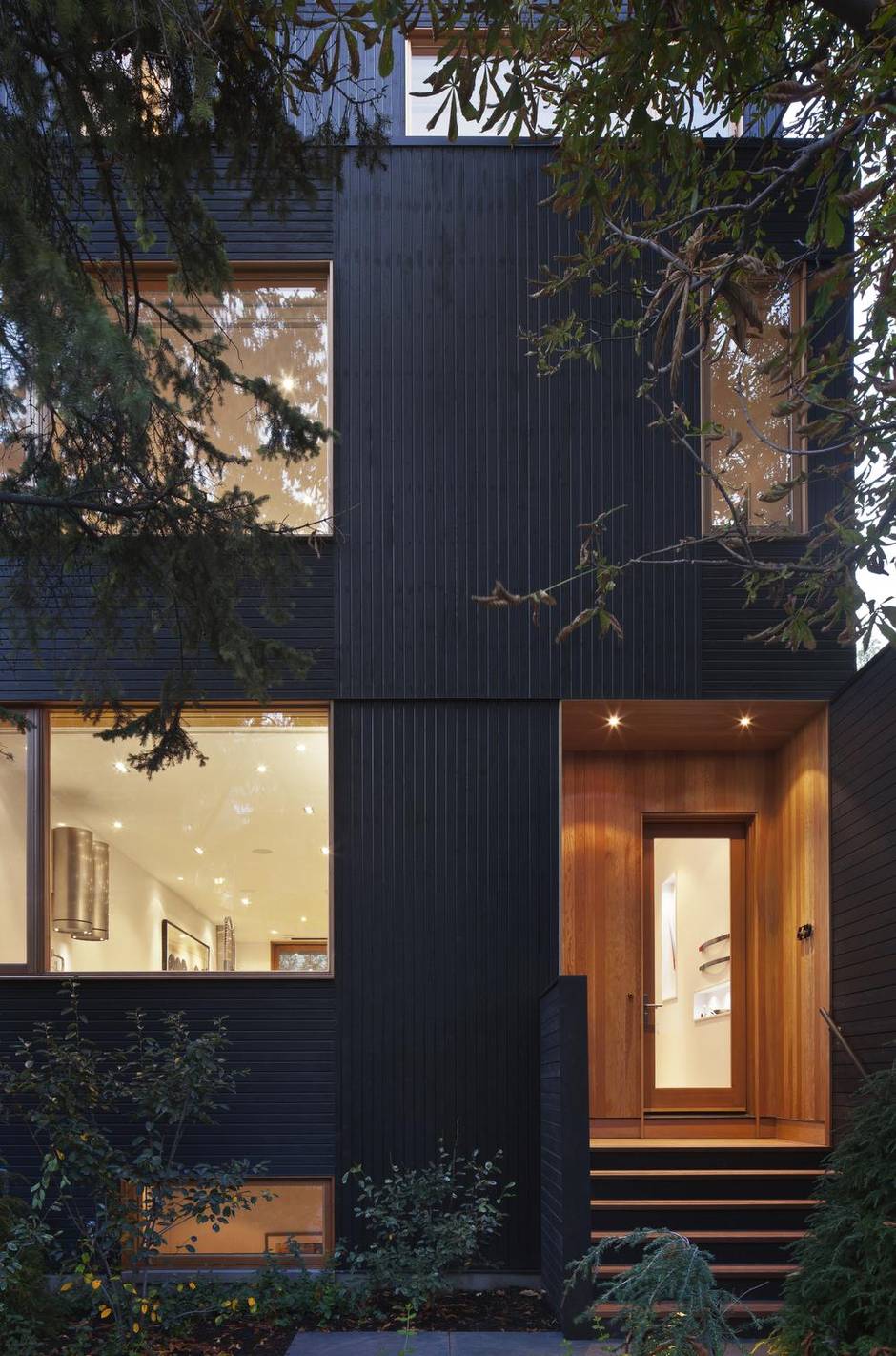 Modernest's House 2, located near King and Bathurst Streets in Toronto, occupies an unusual lot and has entrances on two streets.

This is consistent with their other houses so far, which are built for construction budgets of between $250 and $300 per square foot. Their first gambit was a project near Leslieville: a three-bedroom, 1,250-square-foot house that they sold in early 2012 for $800,000. It was a modern refinement of a standard long-and-narrow Toronto house, and it set much of the design language for the next houses, including Robinson. “I think it’s important to choose a few elements that are going to be unique, and everything else needs to be well-thought-through, but it can be really simple,” Clarkson says. She cites the use of tall custom doors that reach all the way to the ceiling, surrounded by deep casings. These cost a slight premium, but the spatial effect is tremendous. It’s a trick that good architects often use on high-end projects.

Do such hems and tucks pay a financial dividend? Certainly, there are easier ways to make a profit in housing. Clarkson says they just broke even on their first house; many potential buyers balked at its slightly out-of-the-way location. However, they heard from many people who were interested in a Modernest house. And for their second project (near King and Bathurst) and the third on Robinson, they matched sites they’d found with clients who bought in before construction was finished. At Robinson, the buyers, a childless couple, asked for the house to be finished with two bedrooms upstairs rather than three. 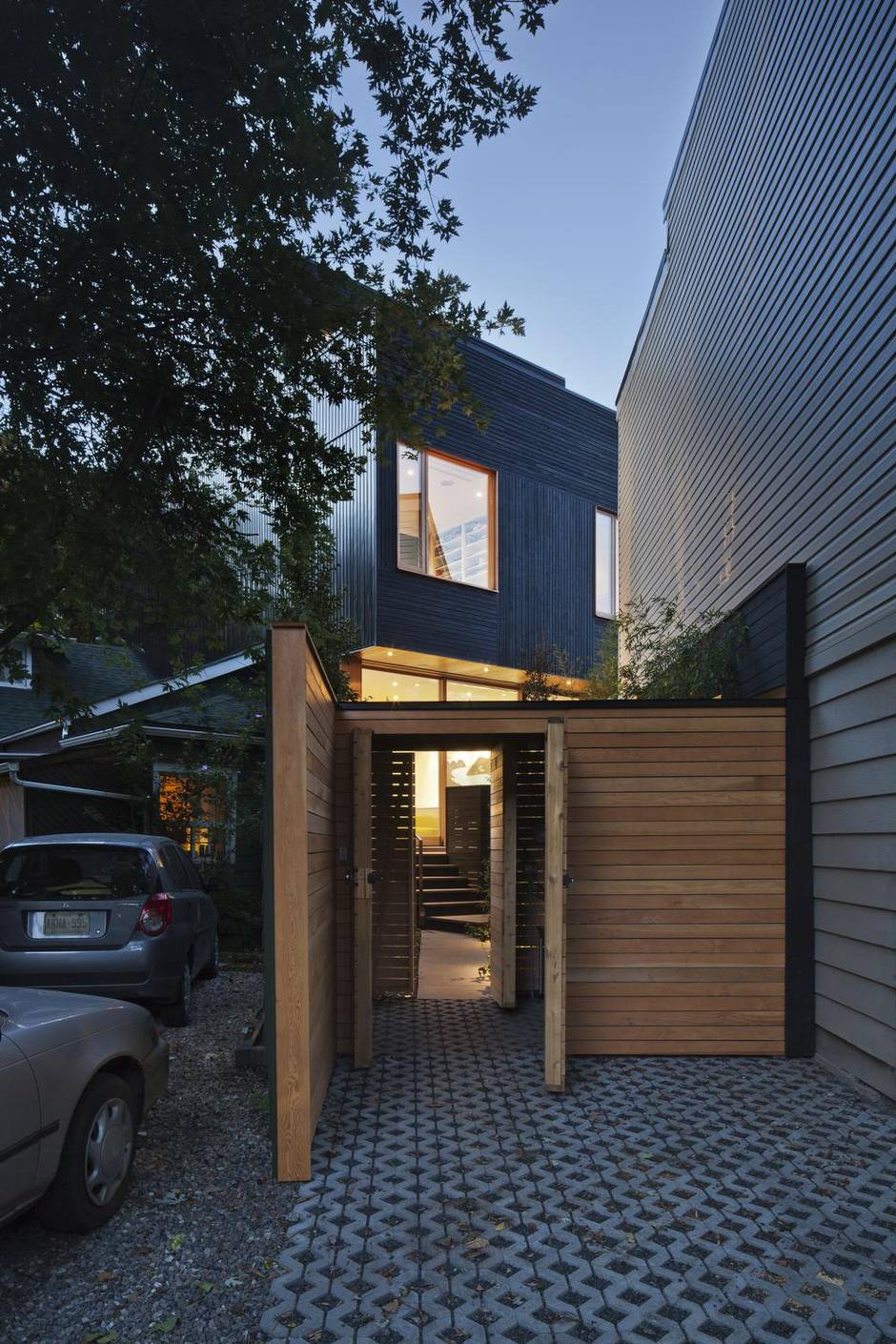 In these cases, they are not exactly developers or architects working for clients in a traditional manner, but were filling a hybrid role. This, Clarkson suggests, may be their niche. “We see ourselves as providing a product that can be purchased with some input,” she says, “like buying a car, where you can choose heated seats or a sunroof.” On the other hand, Clarkson says, each house is “clearly site-specific, and rooted in a place.”

It’s exciting to see talented designers wading into the waters of building and development, and trying to take on a larger role in homebuilding. Too often Canadian architects are reluctant to think of themselves as businesspeople. They seem to feel that if you worry too much about turning a profit or seeking clients, you must not be much of a designer. But that attitude shuts down potential opportunities and shortchanges the city, and potential clients. Most small infill housing projects in Toronto are still woefully bad; renovating an old house in a contemporary manner is nearly as expensive as building new. There are people who would and could buy a good contemporary house if they could find it. 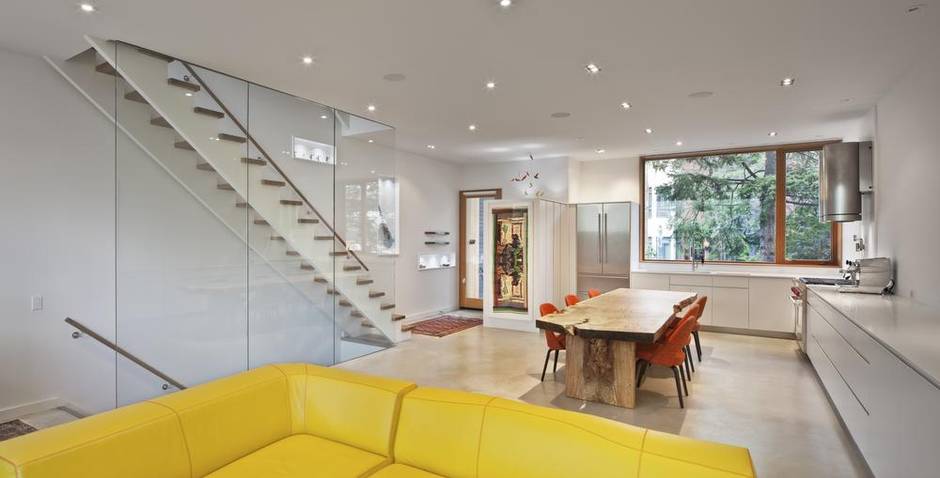 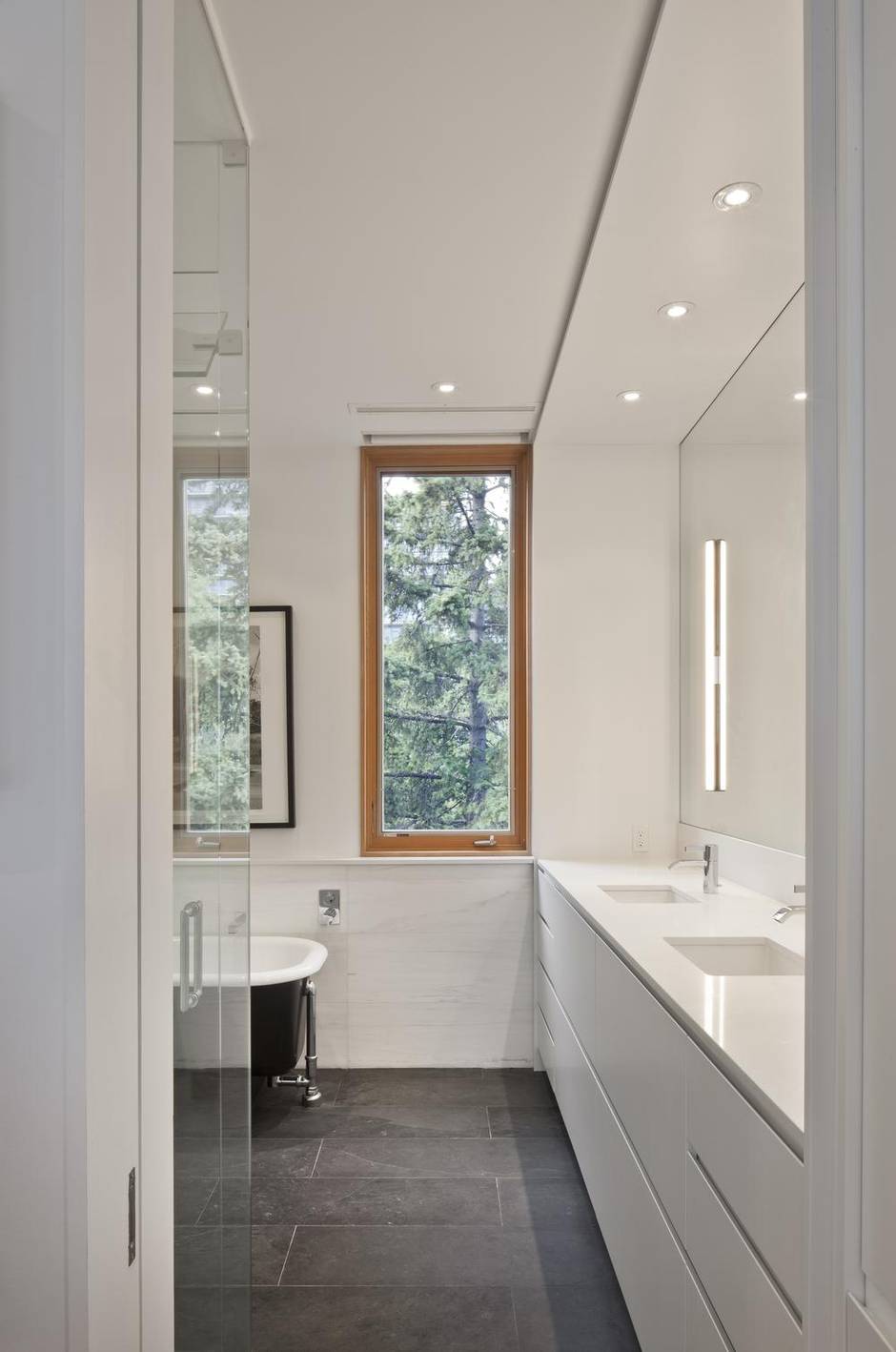 That includes, apparently, Glaisek and Clarkson’s own family. This month they are completing their fourth house, located just south of Bloor Street near Bathurst; it’s the biggest Modernest so far: a very well-planned, 2,500 square feet, and they had intended to put it on the market. Instead, they decided over the holidays to move in with their children, and sell their current home on the Danforth. It will become a sort of showcase for Clarkson’s practice and Modernest. “I really want to use this as an opportunity to be critical about our assumptions and about our design instincts,” Clarkson said.

It’s another black box. It may hold some answers – if not the definitive solution – to delivering first-rate housing to a broader swath of Torontonians.