Though it's been interesting and sometimes exciting, the ongoing pop-up of new residential towers across Toronto has not been accompanied by a parallel deepening of social conscience. I see little indication, for instance, that the citizenry's concern about the disadvantaged among us, the underhoused and homeless, has increased to keep pace with the building boom.

A local publically funded agency that does embody what concern there is, however, and that's doing something practical about it, is the Toronto Community Housing Corp.

This organization, as every Torontonian knows, has come under fire from pundits and politicians during the past few years for alleged offences ranging from bad eviction policy to wasting taxpayers' money.

But whatever TCHC may be doing wrong – I'll let the experts decide the merits of the case – the agency has accomplished one thing that deserves celebration. It has abandoned, in at least some of its new construction projects, traditional social housing's warehouse-like aesthetic in favour of architectural styling that is fresh and contemporary, and as urbane as that of any market-rate condominium stack.

Designed by a team led by Shirley Blumberg, partner in the well-known firm KPMB Architects, in collaboration with

Page + Steele/IBI Group Architects, the 428-unit project is as artistically well-considered and svelte as anything at CityPlace, if not more so. The handsomely tailored 35-storey tower rises gracefully from a boxy, but elegant, eight-level podium.

Block 32's composition is completed by an array of mid-rise structures that frame the spacious landscaped courtyard just west of the podium.

Interior spaces set aside for the residents' pleasure and convenience – a laundry, a games room, meeting places, a community kitchen, and so on – add up to about 7,300 square feet, while an outside area of nearly 22,000 square feet is available for good-weather recreation, barbequing, gardening and other sociable activities. If more amenity is wanted, artist and author Douglas Coupland's smart, imaginative Canoe Landing Park is right across the street.

But there's that name. Though I'm sure TCHC didn't intend it to have this effect, Block 32 sounds like something on the campus of a penitentiary – exactly what you don't want a public-housing project to be. The agency can certainly come up with a more attractive handle, and I hope they do so.

At a glance, in fact, the name is the only thing that makes this complex seem different from any luxury condo high-rise KPMB might do in Toronto.

The significant differences between this building and a normal market-rate Toronto condo arrangement become more obvious, however, when you look inside.

Instead of little units chiefly suitable for single people and childless couples – the usual inhabitants of nearby CityPlace – about half the apartments in Block 32 feature three, four or five bedrooms. Private developers occasionally say that families don't want to live in apartments downtown, so there's no market for ample suites. The fact that every unit in Block 32, including the big ones, is taken seems to argue the opposite.

Price, however, not urbanity, is the main reason people want to live at this address. Even if inner-city condominiums with more than three bedrooms were available, which they aren't, they would carry price-tags in the millions. The average rent for a four-bedroom suite measuring 1,552 square feet in Block 32, on the other hand, is $1,550 per month. A one-bedroom apartment rents for just under $1,000. Families who qualify for rental plans geared to income can pay as little as $85 a month, and do not pay more than $1,167.

Meeting TCHC's criteria for participation in its affordable-rent program is, as you can imagine, hard to do. Even so, tens of thousands of people have made their way onto the organization's waiting list for shelter.

Only about 1,500 men, women and children could be accommodated at Block 32. There is clearly still a great need for homes for the multitude of citizens whom Toronto's hot real-estate market has left out in the cold.

But while it doesn't solve the housing problem all in one go, Block 32 is a solid contribution to the city's affordable rental stock, and that's a step in the right direction. And by making spirited, convincing modern design a priority, TCHC also sets a good creative precedent for whatever the agency does next, and for the dwellings built by other Canadian public-sector providers. Social housing does not have to be artistically pedestrian, as it has been for too long. Block 32 shows how much better it can be. 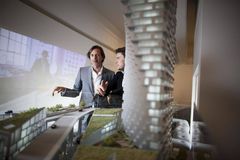 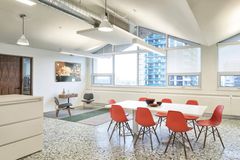 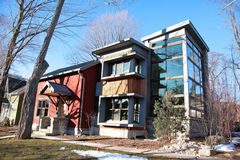