During Toronto’s recent scuffling about what’s to become of the aging Gardiner Expressway’s east end, advocates of a tear-down have argued that their plan would free up sizable tracts of land, currently occupied by ramps and other infrastructure, for high-density residential development.

It’s reasoning that makes sense to citizens (including me) who welcome the intensification of the downtown core south of Union Station. Thousands of new housing units would be available to the many people who want to live within steps of the financial district and the revitalized shoreline of the inner harbour. The city’s coffers would benefit from new sources of property tax revenue and developers would get to put up new towers. On the face of it, the demolition option sounds like a win all round. 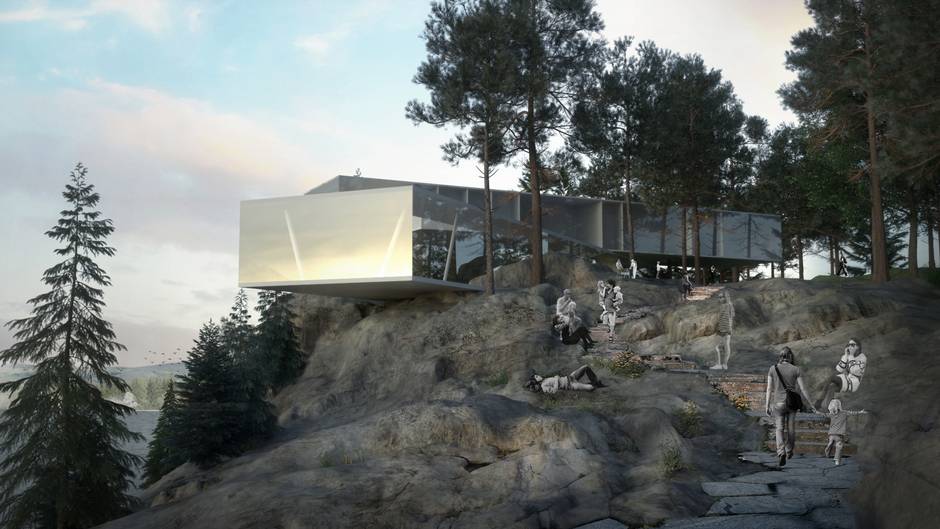 Bar House by Partisans is a 4,000-square-foot residence to be built on the peak of a promontory in the outer islands of the Georgian Bay archipelago. All photos courtesy Partisans. 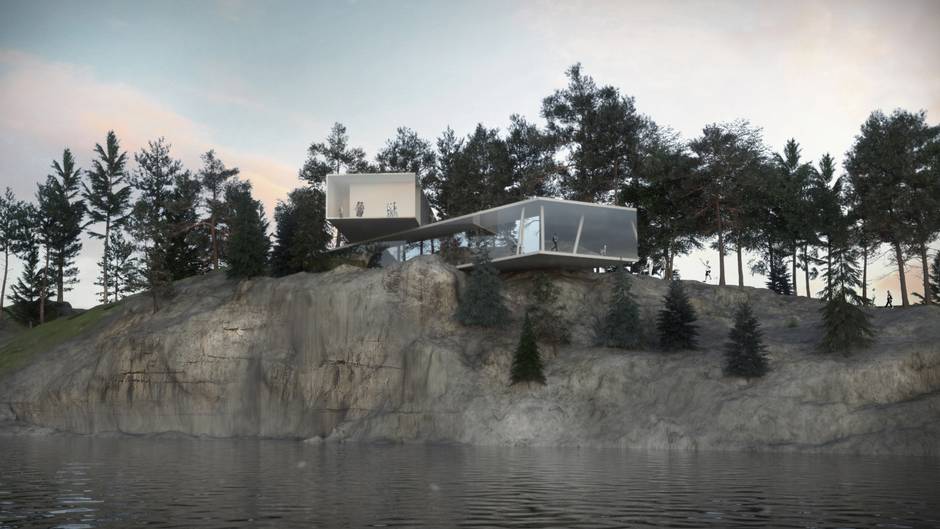 But if and when they get busy with the post-expressway harbourfront, will designers and developers merely produce new incarnations of the same old skyscraper formulas that have prevailed since Hogtown’s condo boom began? Is Toronto’s art of building tall in a rut?

Probably, thinks the design collective known as Partisans, which has won the Ontario Association of Architects’ 2015 prize for best emerging practice.

Or at least that’s what I gathered they think after listening to several members of the group talk about their work last week. Partisans is a small, young, high-energy office founded just three years ago by University of Waterloo graduates Alexander Josephson and Pooya Baktash. To help keep discourse going, Partisans has a full-time “director of content and culture,” a post currently filled by Nicola Spunt, who has a PhD in literature.

Which suggests to me that, while they have completed some projects – an award-winning sauna, a dramatically sinuous bar interior – and proposed several, Partisans, at this stage in its career, is mostly about the conversation.

“Buildings should misbehave,” Mr. Josephson, 32, said. “Developers are doing a lot of buildings of varying architectural ambitions, but there seems to be a constant threat of similar typologies and technologies. They have a similar flavour, regardless of the architectural firm that’s doing them.” 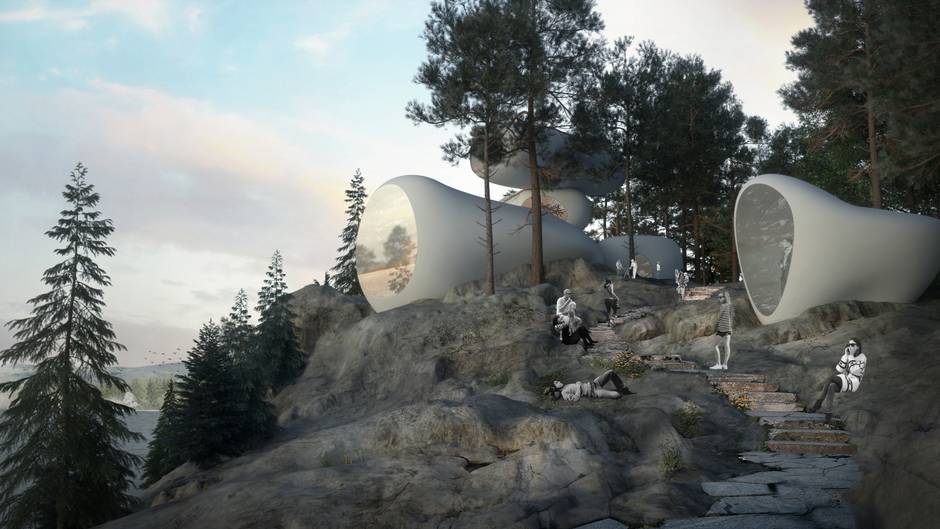 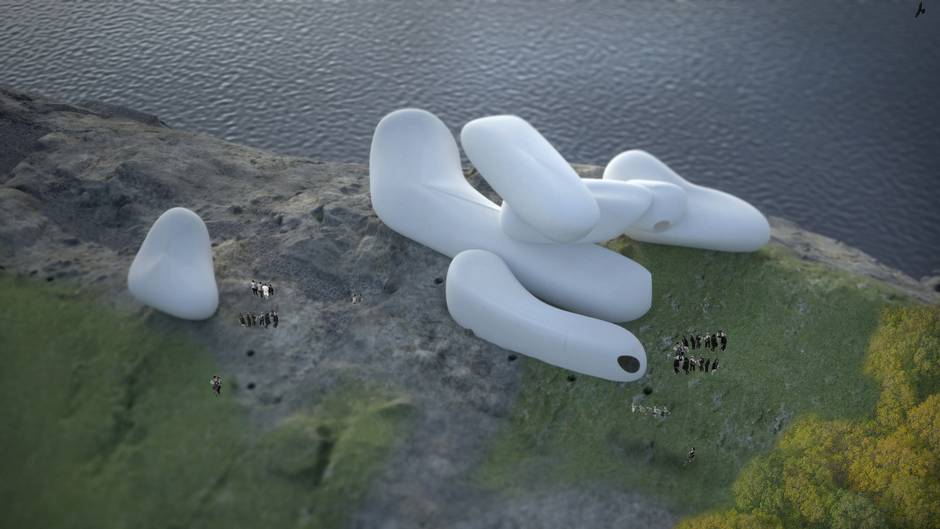 To kick-start a discussion intended to remedy this sameness, Partisans is proposing what Ms. Spunt called “an art and architecture residency for Toronto, an international competition [that] would leverage the boom that has been happening and partner with developers and major cultural institutions and artists.”

If I understand this notion correctly, the percentage of costs that high-rise developers are now expected to set aside for public art would support the winning artists’ participation at the front end of the design process. “It would make the architecture respond to the possibilities of art,” Mr. Josephson said, “rather [than having] the art sit like a corpse in front of the building.”

Somewhat surprisingly, Partisans has little to say about the contemporary tall building’s shaft. Stacking up identical elements in the air, as required by skyscraper economics, is hardly open to much creativity, in their view. The firm’s attention is directed elsewhere: the bottom.

“The public realm,” Mr. Josephson said, “is when you start to design experiences for people who do and don’t live in the building to experience the street. That evolved into this funny project. Everybody in the office designed a podium – forget the towers – 365 podiums. People are going to see these towers from a distance, which is awesome and fine, and perhaps the odd building will become an iconic piece of Toronto’s history. But every one of these buildings has an address … at the ground plane. We thought, let’s forget about the ego that has to do with tower building and think about the 99.999 per cent of the population who live with the podium. How about trying to provide some kind of dream or surrealism at the base?” 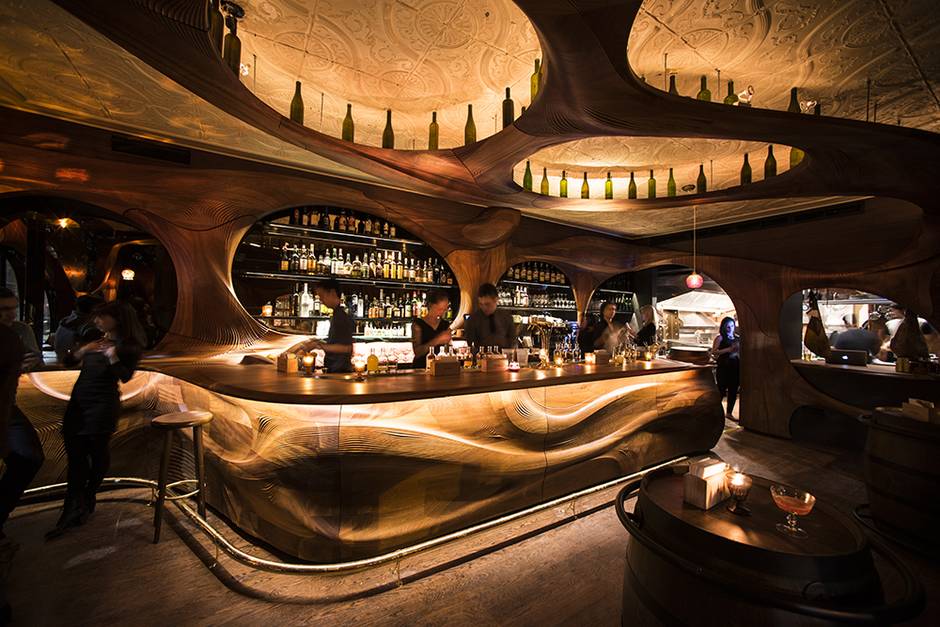 The interior of Bar Raval in Toronto was designed by Partisans. 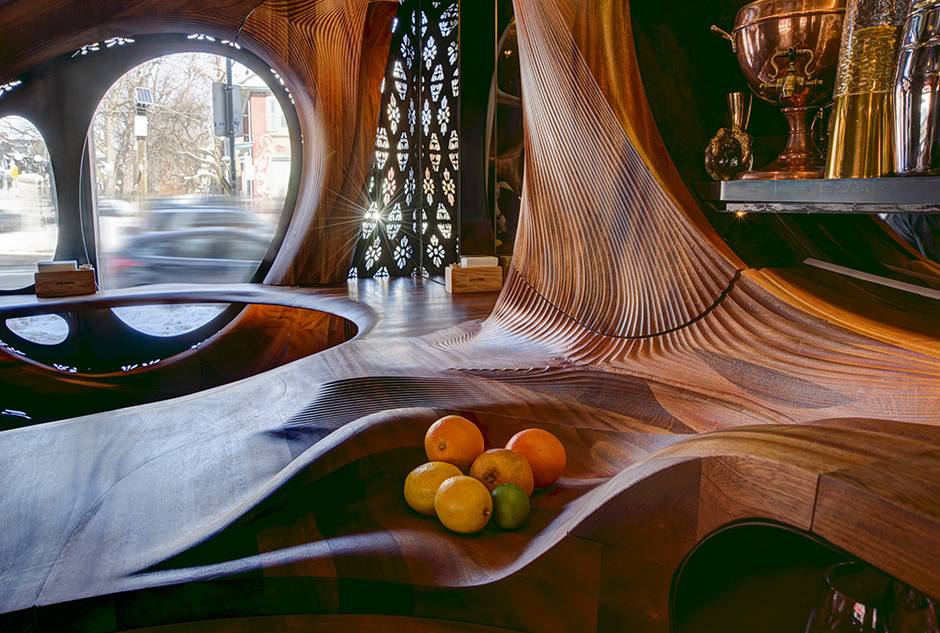 Partisans’ podiums draw on sources of inspiration ranging from the abstract sculpture of Sol Lewitt to Rome’s Coliseum and the rowdy American theme park, from culture popular and high.

Speaking of podiums, Mr. Josephson thinks the city made a big mistake when it recently decided to trim away the exuberant base of Frank Gehry’s tower scheme for King Street West, and reduce the number of spires from three to two. “The three towers – terra cotta, steel, glass – were theoretically cool. It was an intellectual romp through the entire history of tower building … What [Mr. Gehry] was proposing was the remodelling of the economics of how you build condos here.”

“When we built the TD towers, the whole city was an array of Beaux-Arts towers that were under 20 storeys, and then you had these metaphysical black cubes. It was like a Kubrick film” – presumably 2001, not A Clockwork Orange – “on the skyline of Toronto.”