Skyscraper. There’s a reason we use that word. Tall buildings are shaped by economic incentives, but there’s also a poetic motive at work, a drive to find the longest view, a higher office than your competitors, a perch up above it all.

But when that drive to the top goes unchecked, tall buildings can be arrogant trophies, strutting and cluttering up the skyline with swoops and bulges.

A new pair of towers in the works for downtown Toronto shows how capital can stand tall and maintain its dignity. The Bay Park Centre combines elegant architecture with innovative urbanism and place-making that will serve the city around it. 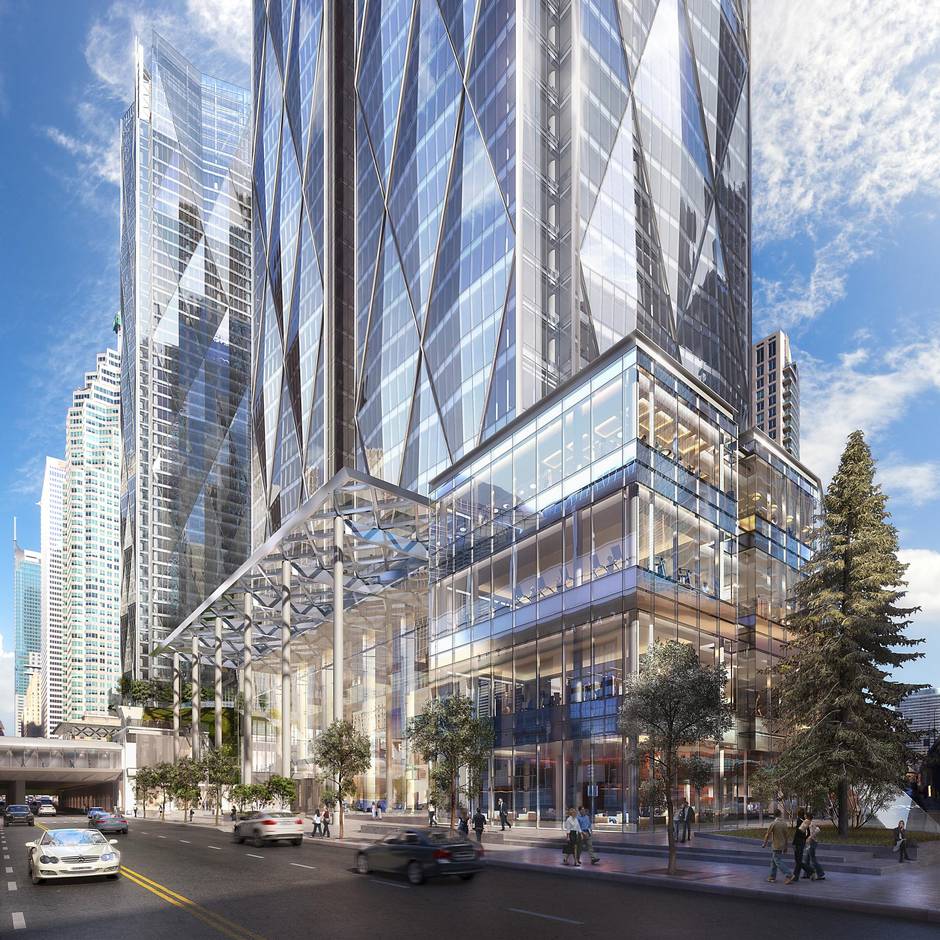 Toronto’s forthcoming Bay Park Centre complex won’t break any height records, but it will be feature a refined design. Its outer façades of glass are lined by a diagonal structural grid, with steel diamonds 10 storeys tall. Behind this, the glass façade itself dips in and out, producing peaks and valleys up to 75 centimetres deep.

The $2-billion, three-million-square-foot complex will sit atop a new commuter bus station and adjacent to Union Station, the busiest transit hub in the country. The first phase, already approved, will be a 54-storey, 1.3-million-square-foot tower and include the GO Transit station.

“The two towers that form the Bay Park Centre are quite a significant addition to the Toronto skyline – we think in a positive way – and adds some architectural character,” says Dominic Bettison, a director at the London architecture firm WilkinsonEyre. His firm, along with Toronto-based Adamson Associates, won the job through an invited competition.

The developer, Ivanhoé Cambridge and Hines, had serious design ambitions. WilkinsonEyre has won the Stirling Prize, the most prestigious award in British architecture, twice, and Bettison led its design of the Guangzhou International Finance Centre, one of the 20 tallest buildings in the world and yet, unlike many of its supertall brethren, remarkably unflashy and elegant in its design.

The Toronto complex is less enormous, but also refined. Its outer façades of glass are lined by a diagonal structural grid, with steel diamonds 10 storeys tall and behind this, the glass façade itself dips in and out, producing peaks and valleys up to 75 centimetres deep. “It’s very subtle,” Bettison says, “but is hopefully going to have a character of being very playful and changeable, and the light should do interesting things across it through the day.” 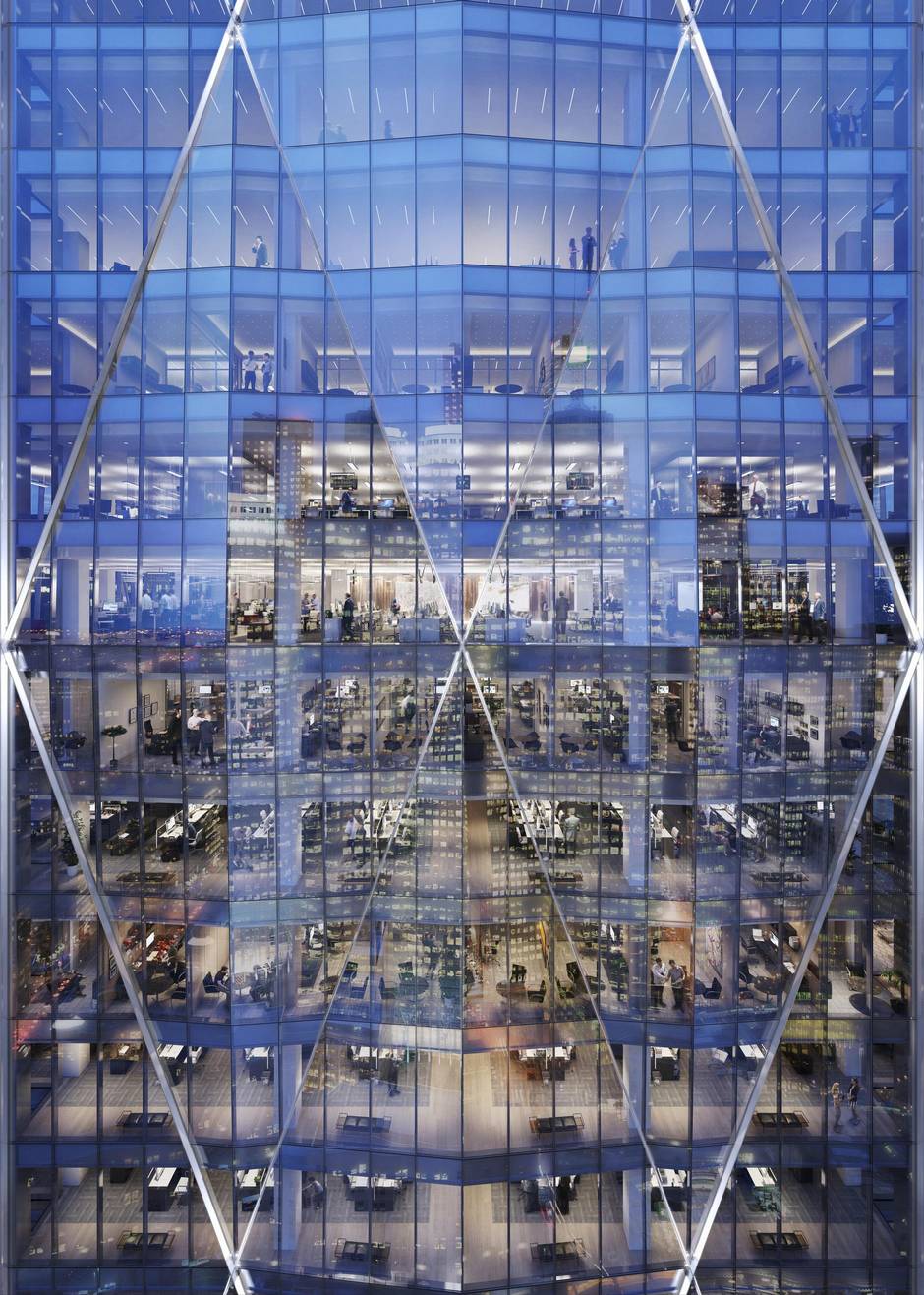 Drawings of the office floors show the results. Where the walls lean outward to form bays, lounge areas – intended for enjoying the view, relaxing, innovating and ideating – fill the small bulges. In drawings, there is a pleasing tension between the perfect grids of the desks and lighting and the billowing, playful geometry of the curtain walls. As much as any corporate workspace, this place will feed the soul.

But here’s the thing: For millions of locals and visitors, that doesn’t matter much. A building like this makes its contributions to the city as an object on the skyline, and, more importantly, with how it connects to the public realm of the city street. In that respect, this complex is remarkably innovative. It will house a badly needed new bus terminal and more. “We’ve tried to connect the development into the urban fabric in numerous ways,” Bettison says.

That’s difficult here. The site sits on the south edge of the city’s downtown, in a corridor now changing rapidly from parking lots to high-rises. The Phase 1 site is hard up against an elevated rail corridor; the Phase 2 site is just on the other side of the tracks, next to Union Station, and it consists of the current bus terminal (which will be closed by its operator, Metrolinx, once the new terminal opens). 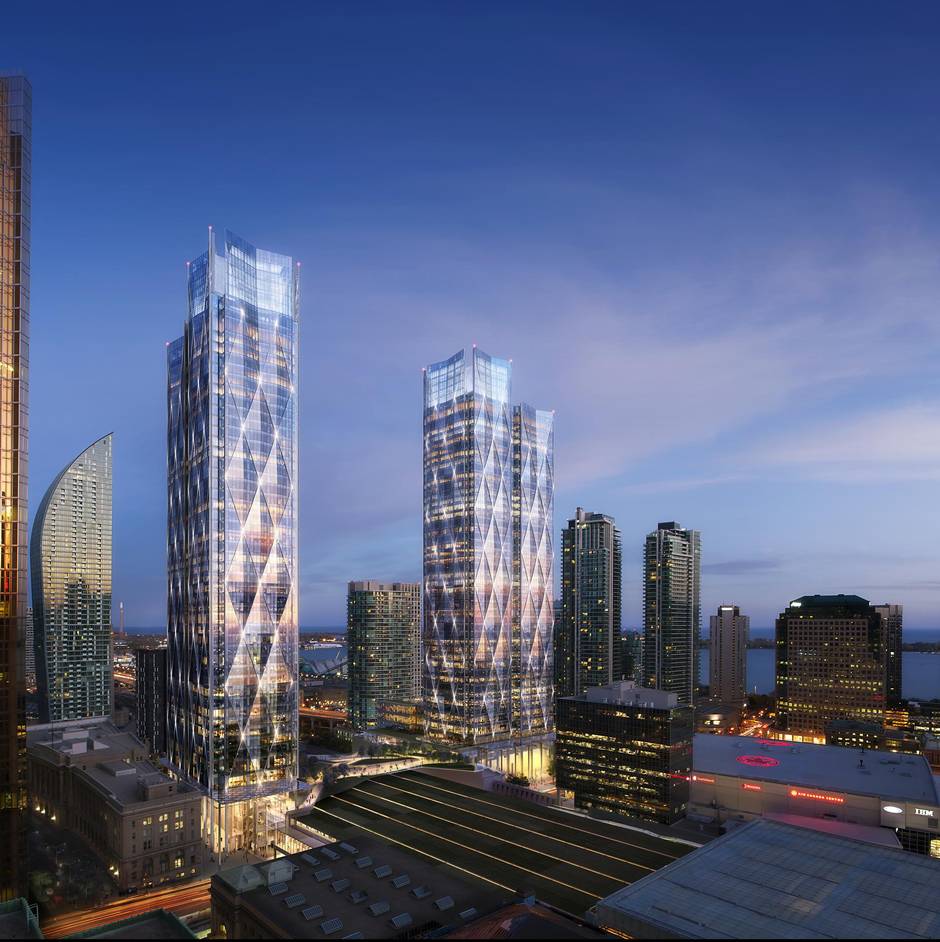 The architects proposed a radical move: to connect the two towers with a bridge over the tracks. This would become a new quasi-park, an elevated green space. Four storeys off the ground, it will link up with shops and restaurants in the towers, and overlook a massive new green roof on the adjacent Union Station train shed. For the office tenants, “it gives the feeling of a campus,” Bettison argues.

It will be like no place else in Canada: an urban square in the sky, a green oasis in a high-rise canyon. The landscape architects, Toronto’s Public Work, imagine it as a mix of plaza and green space, with elegant, grassy berms and an outdoor amphitheatre for performances. And killer views.

“It’s an amazing point of orientation within the city,” says Marc Ryan, a partner at Public Work. “It’s the complement to the CN Tower, a place that you can go to absorb the skyline around you; you are surrounded by the frame of the city.” 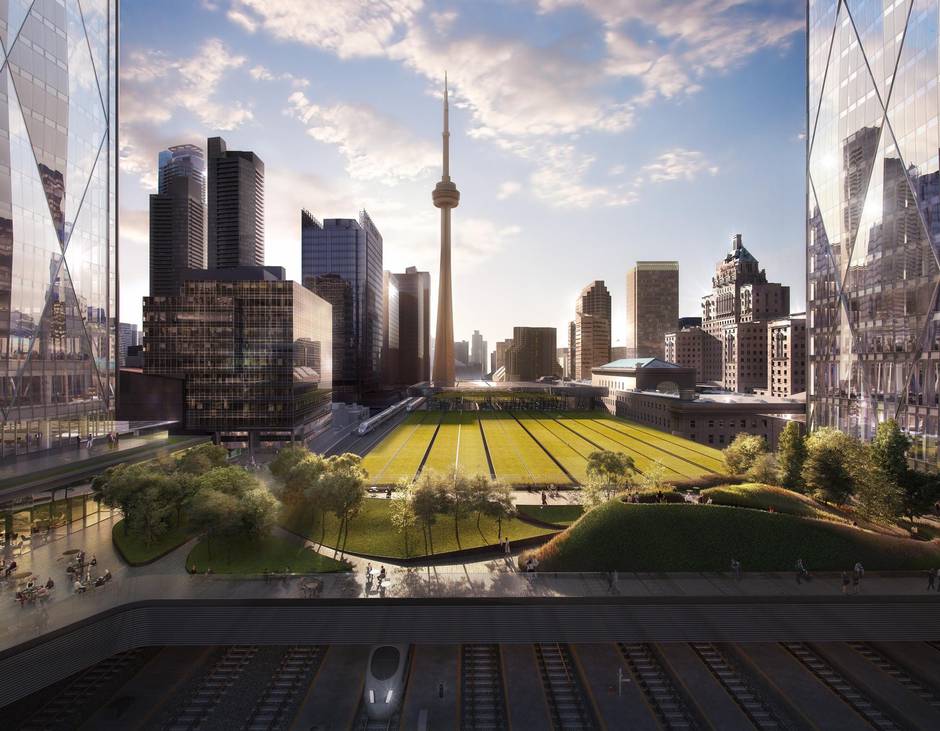 The Public Work landscape architects, who are both young and ambitious (they are also working on The Bentway, the new park under the Gardiner Expressway), will deliver a high-quality design backed by the developer’s money. They are working with consultants BRV on plans to activate the space with markets and cultural activities.

There are caveats. The space will be privately owned – not a park – accessible through elevators and stairs from the street, as well as from the buildings themselves. Such “privately owned public spaces” are a too-common device for Toronto, in particular — a substitute for genuine parkland that the city can’t afford to buy. 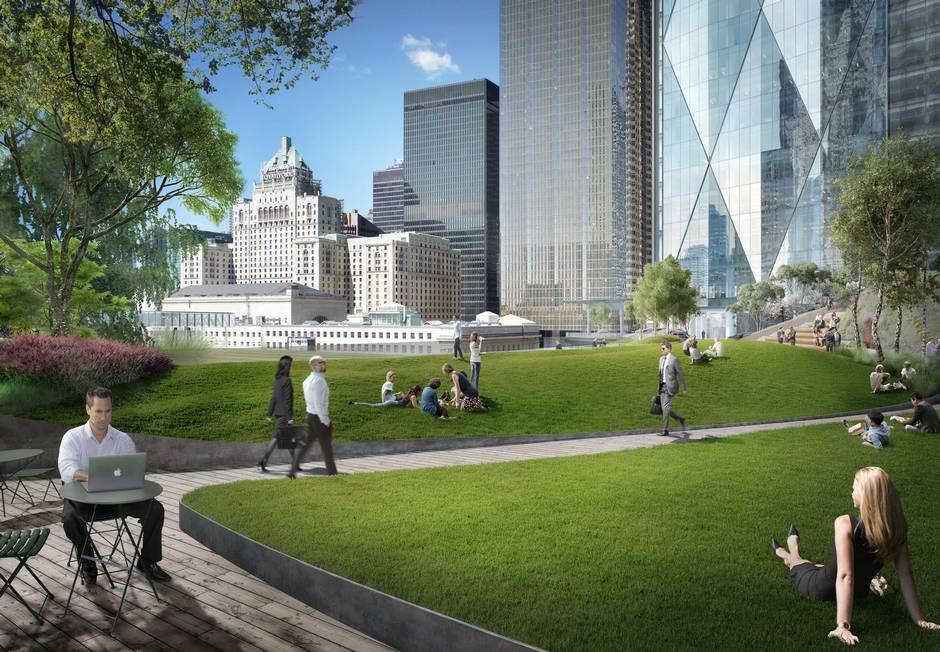 The landscape architects are sensitive to this concern (their name gives you a hint of their politics), but Ryan argues that this space reflects “a confluence of public and private agendas.” The land bridge would never get built on the public dime, so it’s effectively a bonus. This is true.

And the developers and office tenants win too. “It also reflects a more nuanced understanding of corporate culture,” Ryan says, “in that a connection to the city around us is what’s being valued. It’s a more diverse experience, and a more nuanced one that tenants want.”

When the workers come out of their glassy, faceted tower, and out onto the new terrace, what will they see? The train station and towers, tourists and passersby all sharing the spectacle of the metropolis. Not the highest perch in the city, but a place for us all to scrape a bit of the sky.