Under Pearson International Airport’s flight path, buildings must lie low lest they become obstacles, and the network of highways and off-ramps near Canada’s largest transportation hub means that streets – with names such as Galaxy Boulevard, Meteor Drive and Skyway Avenue – are often stubs.

On one such stub called Stoffel Drive., which ends with a go-kart track and a paintball operation, a squat two-storey building at No. 12 is a typical example; the stacks of shipping containers pressing into the mud outside suggests the usual trucking business takes place here.

Until the eye picks up on two things: the company name, “Giant,” is rendered in a hip, New York Yankees/David Letterman kind of way, and one of the containers is covered in professional graffiti. 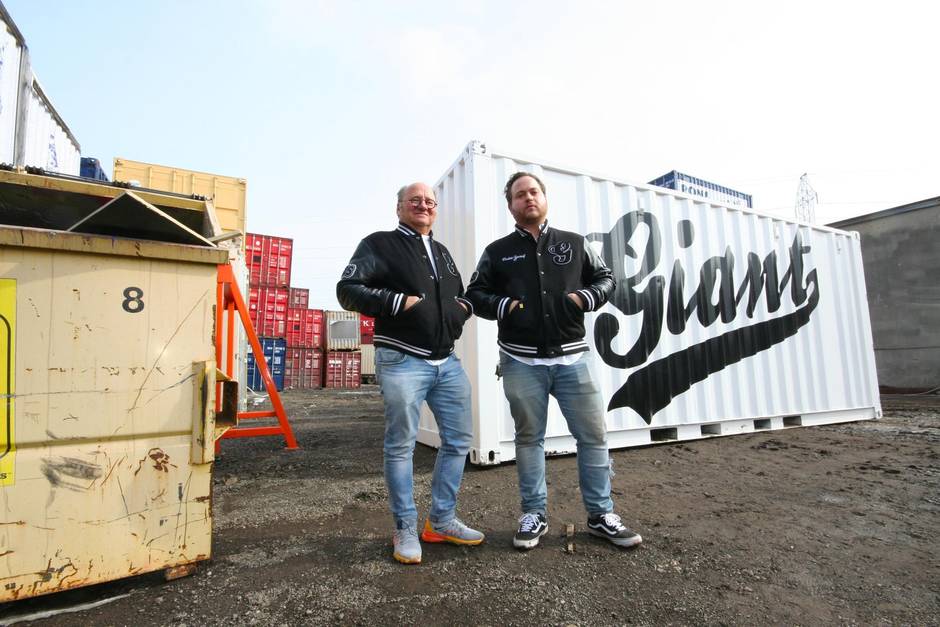 “Anything to do with containers, we’re the one-stop shop,” says Daniel Kroft inside Giant Container Services, his hands spread over a boardroom table made from a chunk of shipping container while framed Andy Warhol soup cans decorate the smooth drywall behind his head. “We’re a culturally relevant brand; we call ourselves ‘unconventionally awesome’ [because] we’re taking these units and we’re doing something different with them.”

They sure are. Looking to add an awesome freestanding garage to your property? They can make it happen. Want a backyard yoga studio? No problem. How about an entire vacation property? Sure. What about a retail pop-up store? Yup. Or perhaps you need an Arctic research station, a climate-controlled greenhouse, temporary disaster victim housing, or even a home for Darwin the Ikea Monkey? Giant has built all of those too, and all using those ubiquitous, corrugated metal shipping containers. 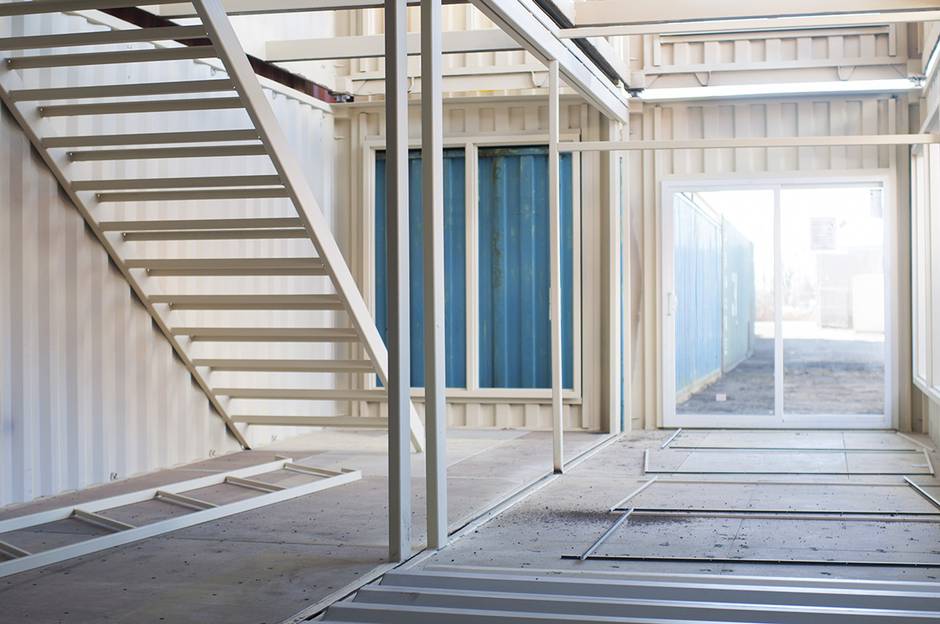 “You want something high-end, we’ll build you something high-end,” Mr. Kroft says. “We work with incredible designers, architects [and] engineers that assist us – right now, we’re doing a glass container studio on the rooftop of a loft. Something like that can still be somewhat affordable, it’s just a matter of what materials you use.” 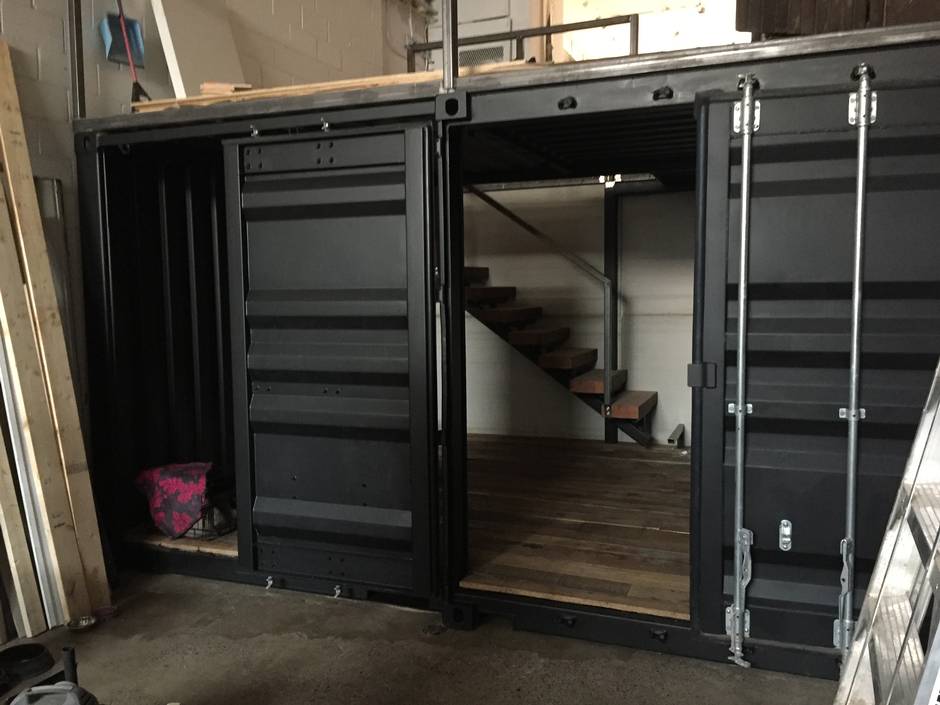 In fact, it’s possible to get an uninsulated container (with a door and a window cut into it) plopped onto your property for “less than five grand.” Use it all summer and then winterize it yourself in the fall.

It all seems too good to be true.

Maybe it is: Since shipping-containers-as-architecture became the biggest thing since bricks-and-mortar in the mid-2000s, critics have come out of the woodwork. In 2011, Toronto architect Lloyd Alter wrote on Treehugger.com that, while he “played with them in architecture school,” he found them to be “too small, too expensive, and too toxic” in the “real world.” 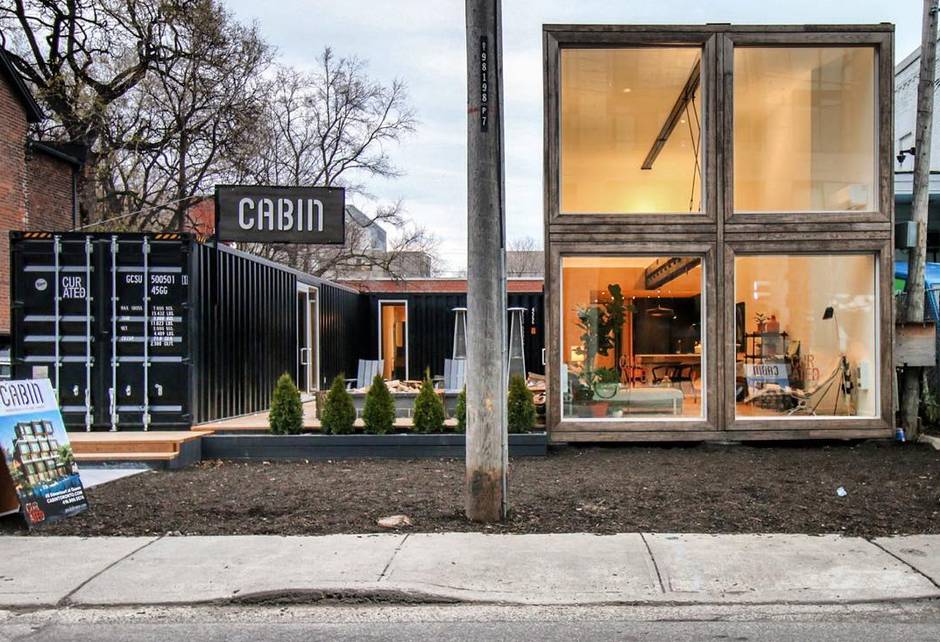 The sales centre for the Cabin condo project, by Giant Container.

While containers are no longer expensive as a result of a global surplus and aren’t always covered with toxic insecticide-paint, Mr. Alter continued to rail against them (with architect Mark Hogan) last September. He argued that they require too much reinforcement once holes are cut in them, that the installation of HVAC systems is difficult, and, philosophically, that the use of an 8,000-pound chunk of metal (the weight of one 40-foot long container) as a home is wasteful. About their continued popularity, Mr. Alter concludes: “Perhaps after all these years I am still missing something.” 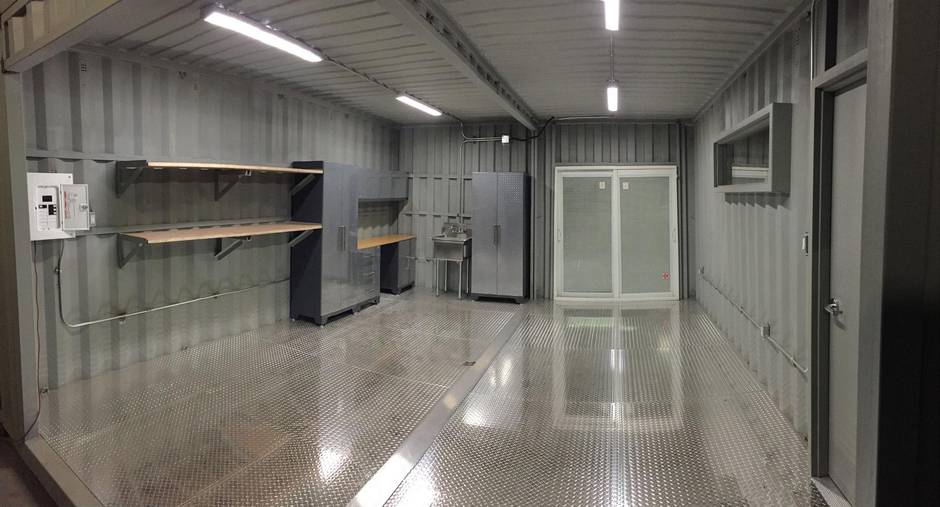 What Mr. Alter is missing is a tour of Giant, where Gordon Kroft and his son, Daniel, have ironed out the corrugated kinks, so to speak. “We really complement each other well because of my logistics background,” says the elder Mr. Kroft, who purchased his first truck from his uncle at the age of 16. “And my zero knowledge of social media, which he has.”

After the early-1990s recession, from which the trucking industry “never recovered” Mr. Kroft says, he got into portable storage using shipping containers. By the early-2000s, son Daniel came on board to help market the shift in focus. 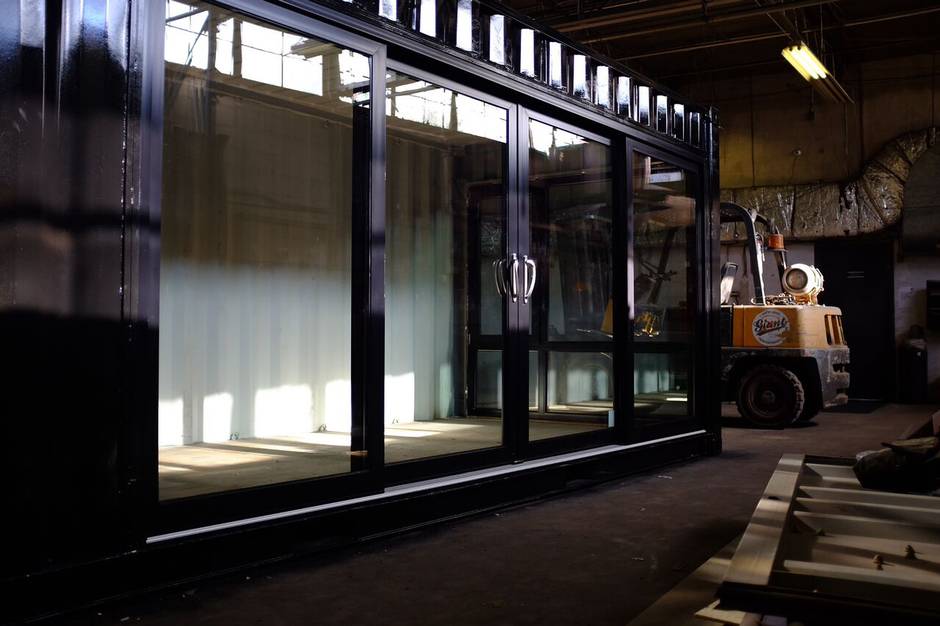 By 2007, Giant started to get inquiries from individuals looking to purchase used shipping containers:

“Not something we ever thought about,” Daniel says. “So we kind of rolled with the punches and I started selling containers here and there, no modifications, just, you know, a guy has a building and he wants file storage, or a guy wants to park his ATVs in them.”

“And with our expertise in trucking,” his father adds, “we were able to pick them up at the ship lines, deliver them, move them.” 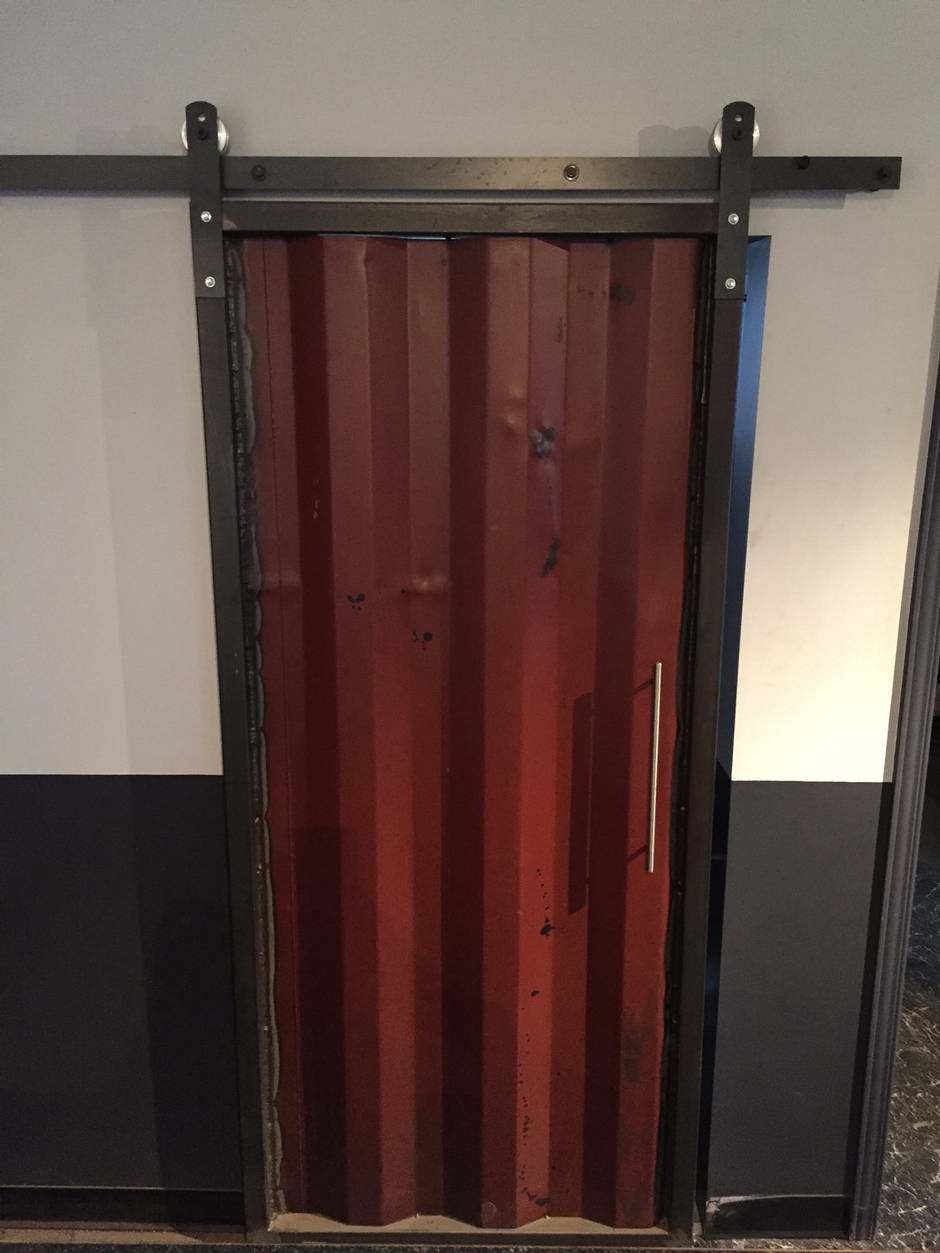 A sliding door built from a shipping container. (Eric Zaworski)

A tour of the 10,000 sq. ft. shop floor dismisses many of the popular criticisms. Here, containers in all sizes – but mostly the standard 20- and 40-foot long versions with roof heights of 8 1/2 or 9 1/2 feet – are undergoing breathtaking transformations into residences, tiny restaurants and man-caves. With so many pieces of structural steel lying around and so many talented welders on staff, reinforcing window-spans isn’t a problem. Ductless heating and cooling units, such as the popular “Mr. Slim” by Mitsubishi, work like a charm, and spray-foam insulation keeps everything airtight. 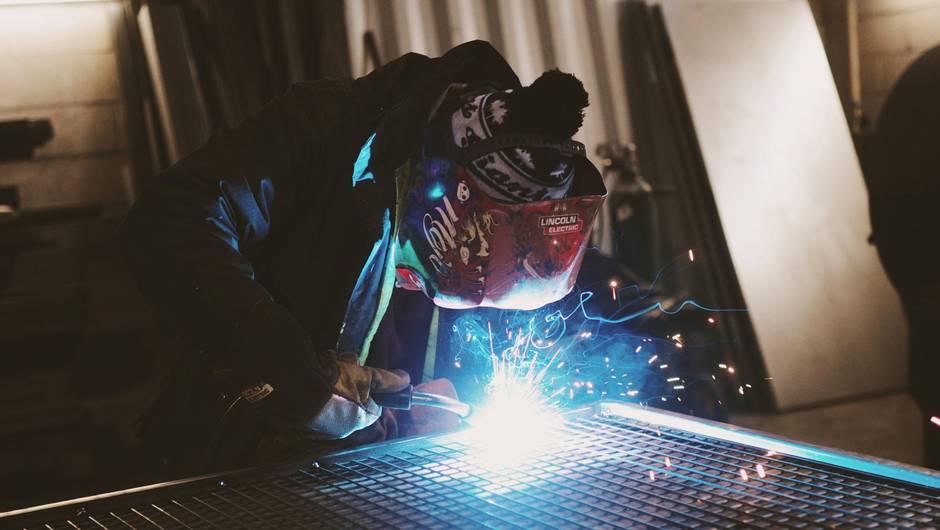 A worker at Giant Container makes a cut. (Eric Zaworski)

And while shipping containers will always be heavy, they sit lightly on the land: concrete tubes at each corner with an embedded steel plate, and the container is locked down in the same way it’s secured aboard a ship. “So you can drive your car into that thing, and the container may bow, but it ain’t going anywhere,” Daniel says. 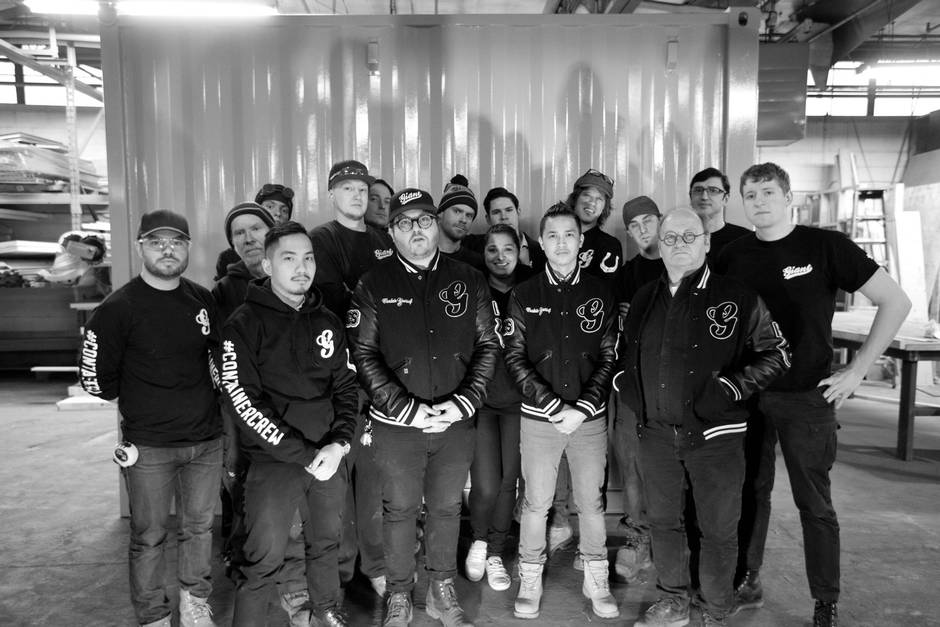 The staff of Giant Container Services in their Toronto workshop.

And with new uses, such as swimming pools, a line of furniture, sliding barn doors, and a subdivision of Modernist homes on the drawing board, this is a sub-genre of architecture that’s on equally firm footing for the foreseeable future.

Because despite being squeezed under Pearson’s flight path, dreams cannot be contained at Giant.