You've heard of Pyramid Power, that 1960s-70s belief that placing things or people under tiny pyramids would heal, preserve or enlighten?

Well, it's time to conjure up a little Cosmic Cube Energy for Martin Trainor, the lone resident of Toronto's Cube City.

Cheek-by-jowl with the Adelaide Street East overpass, that crazy cluster of cubedom has been with us since 1996 and, somewhat fittingly, shrouded in mystery for almost as long. While many know that Ottawa architect Ben Kutner and partner Jeff Brown were inspired by Dutch architect Piet Blom (1934-1999) and his famous 1984 Kubuswoningen (Cubic Houses) in Rotterdam and, further, that they had ambitious plans to develop forests of this licensed and slightly modified Canadian version on otherwise unusable patches of land, not much is known about what happened since.

When the cubes have been mentioned at all, it's been about the legal battle between Mr. Kutner –who did not own the land upon which his cubes sat – and the original landowner. Mr. Kutner claimed the cubes were chattel and therefore removable, while the landowner claimed they were part of the site. About a decade ago, Coffee Time founder Tom Michalopoulos's Stathmar Realty Corp. purchased the site and quietly renovated the cubes for occupancy; more recently, Mr. Kutner lost his legal battle, meaning that their future is solidly in the hands of Stathmar.

Because of this, emerging from the cubes' shadow to advocate for their preservation is Mr. Trainor, a nine-year tenant of two of the three cubes.

"I have to give them a purpose for being here," says the Belfast-born CBC cameraman and part-time St. Lawrence Market sausage vendor. Mr. Trainor, who photographed the "blood and guts" caused by IRA bombs for the Toronto Star in the 1970s, is today on a one-man mission to make the cubes "a hub, a destination" to rival their Rotterdam cousins. To that end, this past June he travelled to The Netherlands and met Ed de Graaf, owner of a "show cube" that's visited annually by 35,000 cube-curious who fork over €2.50 to ascend the stairs and view his interior design work and an architectural model of the cubes.

"If I can do something similar here, we can hopefully preserve these as a city landmark," says Mr. Trainor. He points to the construction of the clever Underpass Park just across the street from his home, and, just beyond that, the 2015 Pan Am Games Athlete's Village. If he could, say, open an outdoor cinema or erect a beer tent and a pavilion that educates Toronto's cube-curious, he thinks he could achieve this. He's already got a commitment from Mr. de Graaf to "twin" the Toronto and Rotterdam cubes by installing a video link between them.

While perhaps pie-in-the-sky, Mr. Trainor is also ready to "nuture" a connection with Piet Blom's son, owner of the design, to get even more cubes built. It's not that far-fetched, he says, since the original plan for the Eastern Avenue and Sumach Street site was to have a cluster of seven rather than three.

The second snag is that, while fascinating to see in any condition, the interiors need much love before they equal Mr. de Graaf's much-visited place, since there are no built-in couches, groovy light fixtures or architectural models on offer in Mr. Trainor's cubes. Despite this, it's still fun to spy too-close cars whizzing by the pointy windows on the 350-square-foot lower level (his home office), or feel the pyramid-like volume of air above the 600-square-foot main floor (which holds the living/dining/kitchen) while listening to his ambitious plans over micro-brews, as I did on a pleasant Sunday afternoon.

To that first snag, Steve Michalopoulos, the son of the Coffee Time founder, suggests that "at some point in time" the bottoms may be spruced up "depending on what the plans are for the cubes in the long term." Unfortunately, he's not saying what those plans are – which is understandable given that this area could explode with development in the next few years – except to say that it's doubtful they'd build more cubes since "we're not by any means a residential developer." He does add, however, that the cubes are "very interesting.

"One of the reasons that Tom's holding company bought them was because he was fascinated by them and he likes interesting things," says Mr. Michalopoulos.

As for the second snag, Mr. Trainor suggests that "cube-domiums" would be a wonderful solution, and he's presented the idea to the senior Mr. Michalopoulos on several occasions. If that were to happen, he could fix up his interior and get on with the business of charging admission, which would generate enough Cosmic Cube Energy to find a piece of land where more could be built.

"Let's say they could be self-sustainable," finishes Mr. Trainor. "Would somebody spend a million bucks on one?"

Former Four Seasons ready for its next close-up
September 15, 2011 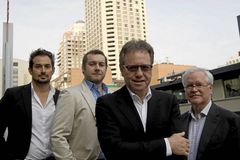 Taking in the view from a rejigged Toronto Special
September 8, 2011 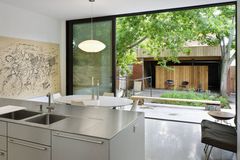 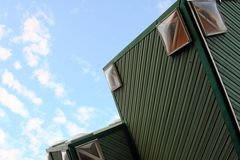