It was when I paused on that wide corner stair that it really hit me.

Oh, sure, we architecture aficionados know that Ronald J. Thom is a legend. An artist-turned-architect who felled majestic western red cedars with his bare fists and then karate-chopped them into Modernist, post-and-beam homes and new attitudes about living, he brushed the British Columbia sawdust off his plaid shirt and donned a tuxedo to conquer too-soft Toronto with Massey College in the early 1960s.

We know, too, how he then lovingly tucked building after building into Ontario's shady glens and concrete cityscapes until his untimely death in 1986, creating a forest of architecture that, viewed in a book or online, easily reads as genius.

But try to see individual trees and, well, that's harder. For instance, Mr. Thom's beautiful forest of buildings at Peterborough's Trent University is so striking a composition, little moments can be almost invisible. 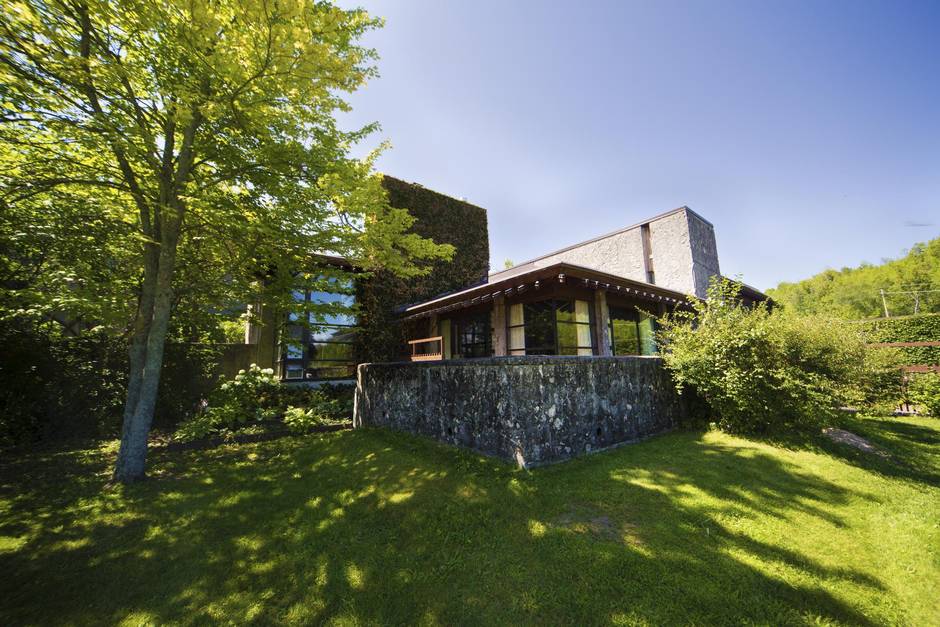 Until I climbed those three wide steps inside Alumni House.

After opening the former private residence’s front door and stepping into a dark, low-ceilinged foyer, Mr. Thom’s manipulation of natural light drew me, magnetically, down a long, sunlit corridor boasting two-storey windows looking onto a lush courtyard. Then, I was offered several choices: up a set of narrow stairs to the second floor; a hairpin turn into the dining room; or, take Mr. Thom up on his offer of those three steps – set en pointe so they read more like chevrons than stairs – up to the living room. 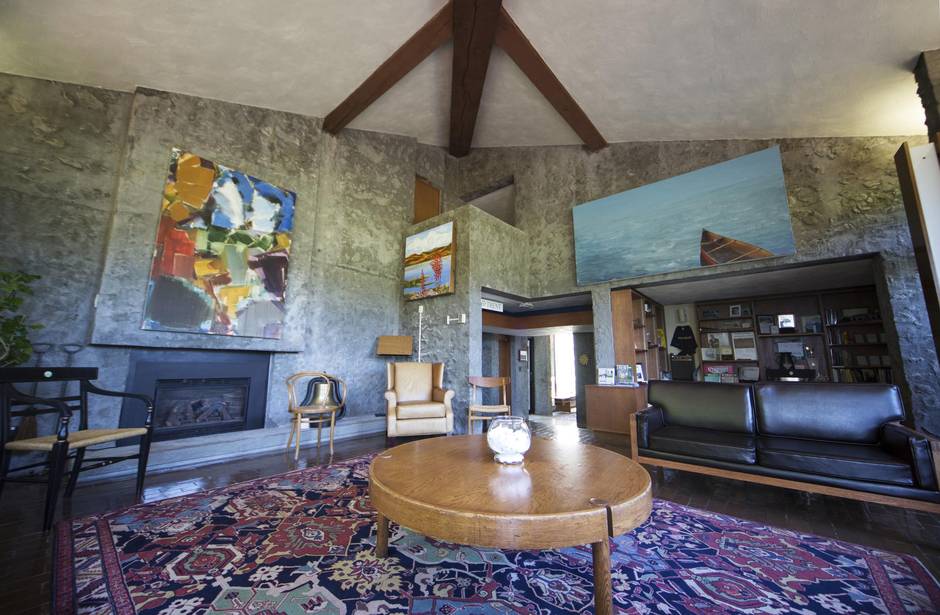 Inside a Ronald J. Thom build

Of course, I chose the three steps. And it was exciting enough ogling the big fireplace, massive ceiling beams and (more) big windows that I paid little attention to them. I also marvelled at the long wall sconces of cedar and Plexiglas – no doubt a Thom design – and the little attached den with a built-in couch.

I even explored the dining room and kitchen, and climbed the narrow staircase to the second floor to deposit my luggage in the cozy guest room. The second time I hit those stairs, however, I paused. Why? Because each point of each step aligned perfectly with a level change in the ceiling directly above it, as if the home were bending to allow just enough room for a body to move through it.

In a word, it was poetry. 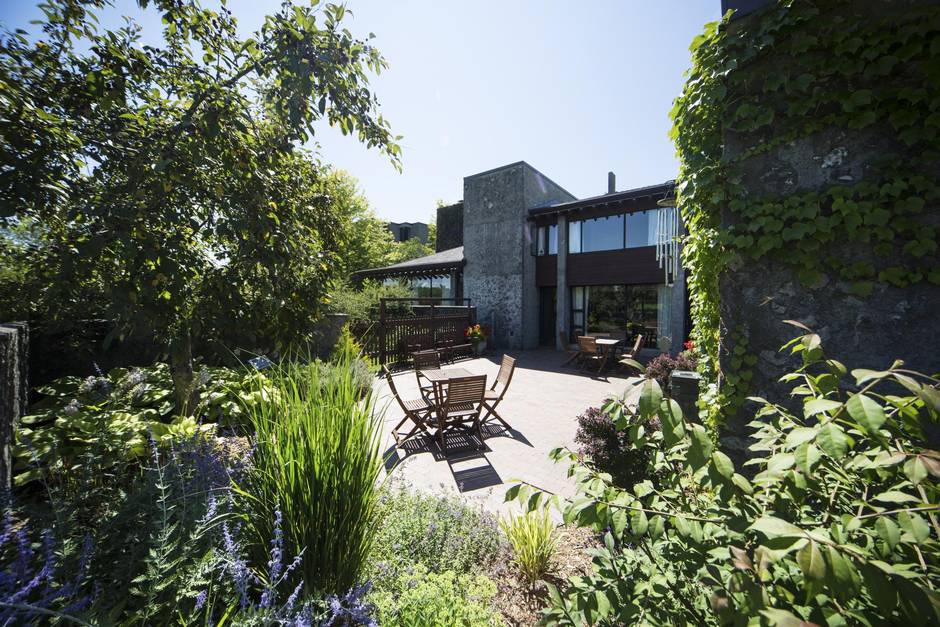 The planning of Trent University began in the late 1950s, and Mr. Thom (then with Thompson, Berwick & Pratt) was selected through a national competition in 1963. Witnessing the “academic elephantitis” of larger universities, founding president Tom Symons entrusted Mr. Thom with his vision of an intimate, cozy, pedestrian campus where students would mingle with faculty; he also wanted a residential college system similar to the one he’d been part of at Oxford. After the pair went on a fact-finding trip there (as well as Cambridge), and another to Yale to tour the newly minted and very modern Morse and Stiles colleges by Eero Saarinen – where it’s been suggested Mr. Thom got the idea to use the distinctive “rubble aggregate” for the walls – the master planning architect put pencil to drafting paper.

Sod was turned for the men-only Champlain College in 1965 (the women’s college, Lady Eaton, followed a few years later) and, to further enhance intimacy and interaction, an attached-yet-secluded private residence was provided for the college master. Up until August, 2006, when it was reassigned and restored, it was a place for “lots of drinking sherry [and] lots of students getting to know their professors in a nice, casual setting,” Alumni House director Lee Hays says. The four-bedroom home was also a place where families celebrated and children were raised.

Today, it’s a tiny Thom treasure at the edge of the campus that welcomes alums when they visit, plus offers them overnight accommodation at reasonable rates. It also hosts events throughout the year.

And, like the rest of the Thom-designed portion of Trent, all materials – glazed brick floors, cedar, rubble aggregate, concrete – as well as architectural motifs, such as narrow doorways, juxtaposed ceiling heights and light-versus-shadow, are all here in microcosm. It’s a space that, despite being designed as a private residence, encourages serendipitous interaction, as in Trent’s public areas. 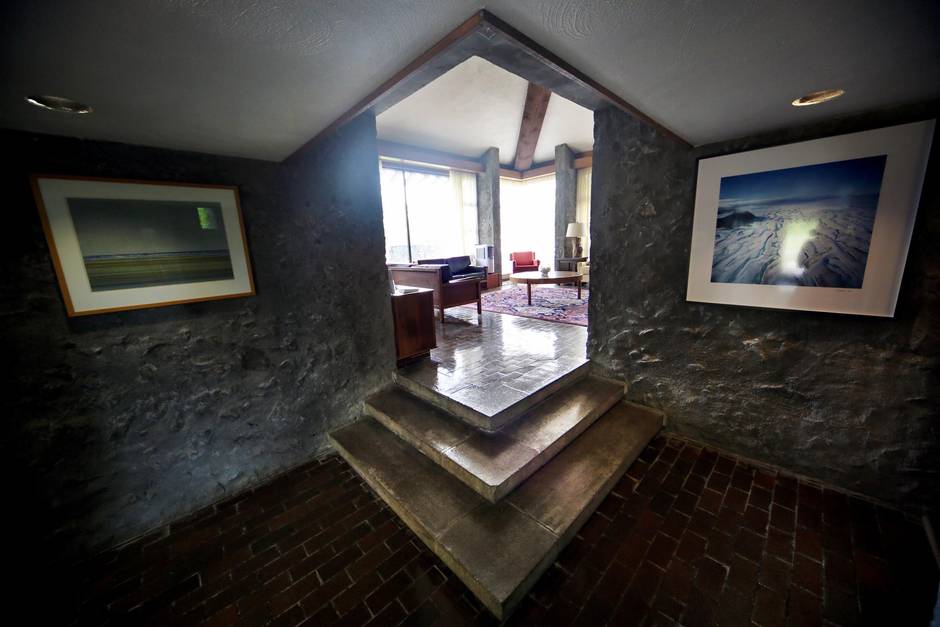 “As a student you don’t appreciate it … you’re getting to classes and you’ve got a million things going on in your head,” says Ms. Hays, who attended the university in the 1990s. “But when I came back and started working here I saw things absolutely differently.

“You also understand, oh, so that’s why my experience here felt special and I had great conversations: It’s because of the way things were built – it was specifically designed that way.”

Peppered throughout the home are examples of Thom-designed or Thom-approved furniture; for example, Ms. Hays’s office (a former bedroom) boasts a pair of Arne Jacobsen swan chairs and a Thom-designed dining table repurposed as a desk. Eagle-eyed visitors will note that small labels have been placed on original furniture all over campus to ensure no more is lost, as occurred in the 1980s and nineties. The project was headed by Dr. Michael Eamon, then principal of Lady Eaton College, and a group of students in 2013.

It’s rare for a Modernist complex only a half-century old – Trent celebrated its 50th birthday in 2014 – to be embraced by its caretakers; it’s rarer still for the name of the architect to be on the lips of so many, yet “Thom” is spoken here regularly – surely a result of his genius.

“It’s wonderful to come to work every day,” Ms. Hays says. “I feel privileged to come and work in the space that I work in.”