Of all the angles, the 90-degree one has been the favourite of builders since the invention of post-and-lintel construction thousands of years ago. It will likely remain the best-liked angle forever, or at least until people start building in places where gravity doesn’t matter.

Meanwhile, back on Earth, some architects of public structures (museums, galleries, even churches) have been playing the other angles, from acute to obtuse. As everyone knows, their formal experiments – Daniel Libeskind’s jagged, thrusting extension of the Royal Ontario Museum in downtown Toronto, for example – have enjoyed a decidedly mixed critical reception.

But judge them as you will, large buildings that contest the authority of the straight-up box and the rectilinear grid have inspired numerous contemporary architects to introduce unusual angles into their schemes. Among these designers: Torontonians Saied Mahboubi and Titka Safarzadeh, partners in life and in the firm they call Green Dot Architects. Last week, I visited a new, modestly scaled and very lovely house by this couple in Toronto’s East York neighbourhood. 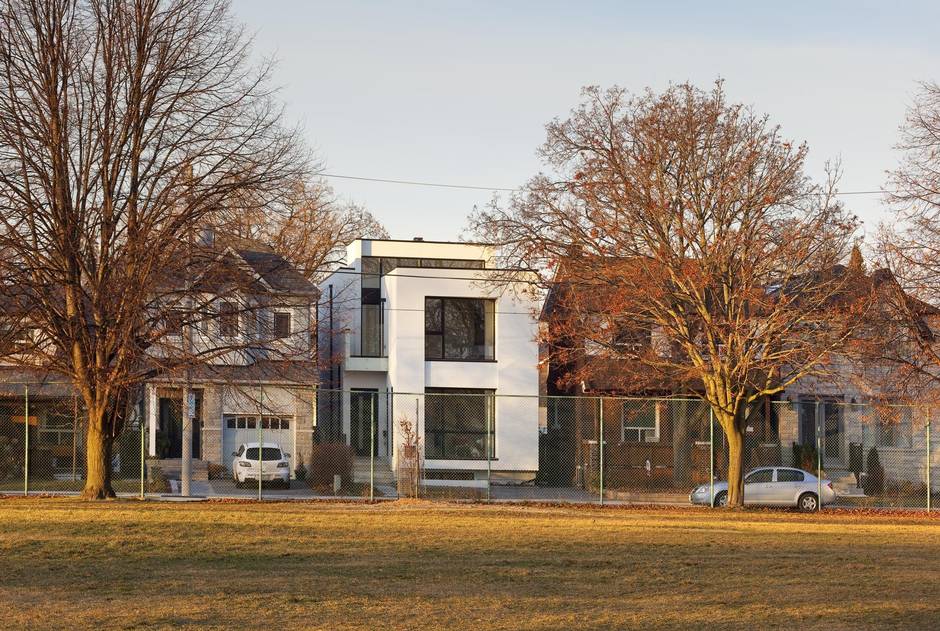 The streetside façade of the flat-topped 2,073-square-foot dwelling, at first glance, appears to be a sternly modernist composition of white stucco surfaces punctuated by black-framed windows.

Taking a second look from the sidewalk, however, one sees the subtleties of the building’s public face. For instance, instead of being squarely installed flush with the plane of the exterior wall, as ordinary windows always are, the glazing turns inward, away from the street, inviting the eye inside. 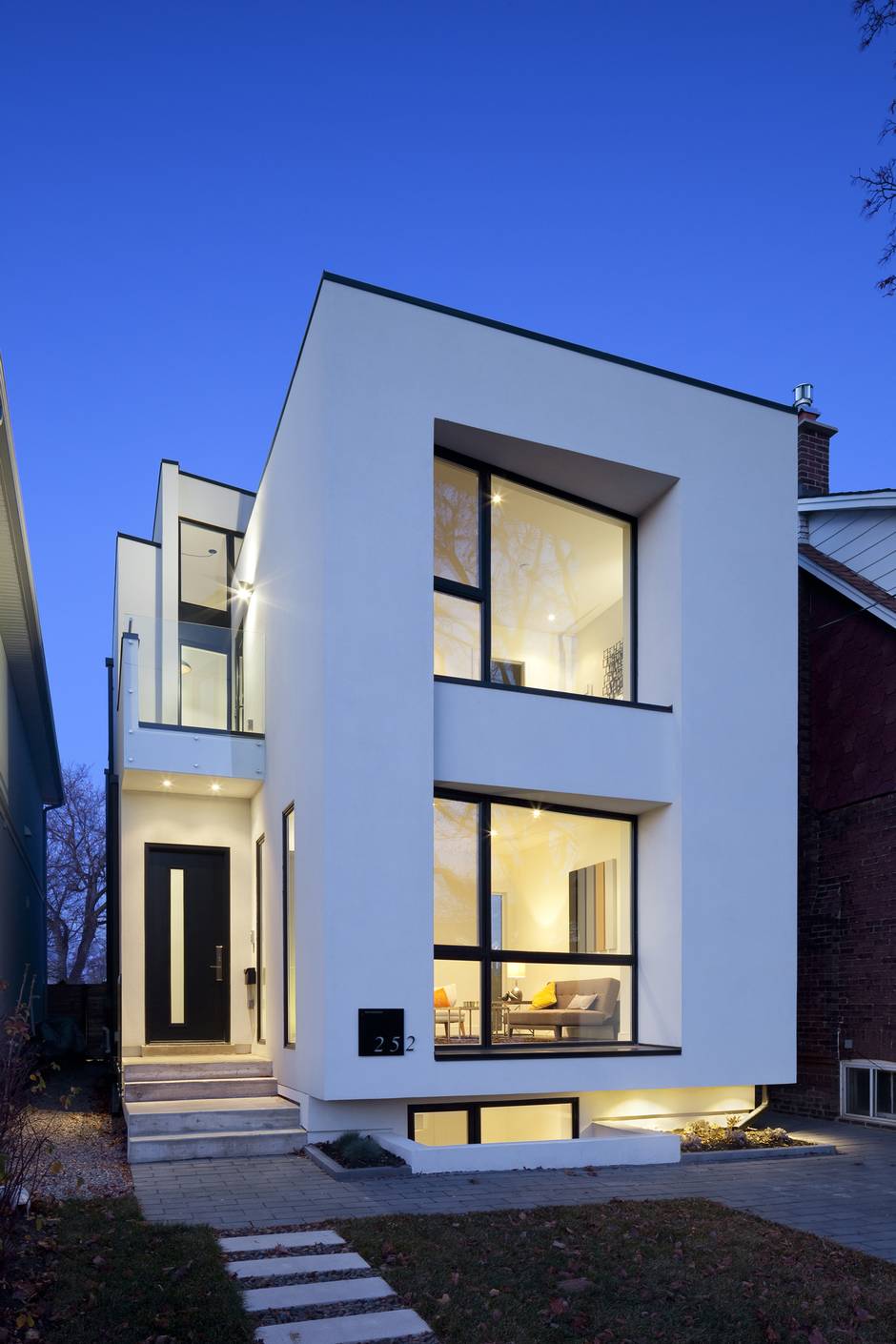 The glazing of the front windows turns inward, away from the street, inviting the eye inside. (Tom Arban)

The quietly dramatic effect of the façade’s main extent contrasts with the intimacy of the small entrance pavilion, off to one side.

From the street, the house seems to have been constructed of two volumes: one sizable and bold, and another that is more complex, private, even slightly secretive. Inside, unity and simplicity prevail, and certain basic structural themes hold the interior design together. 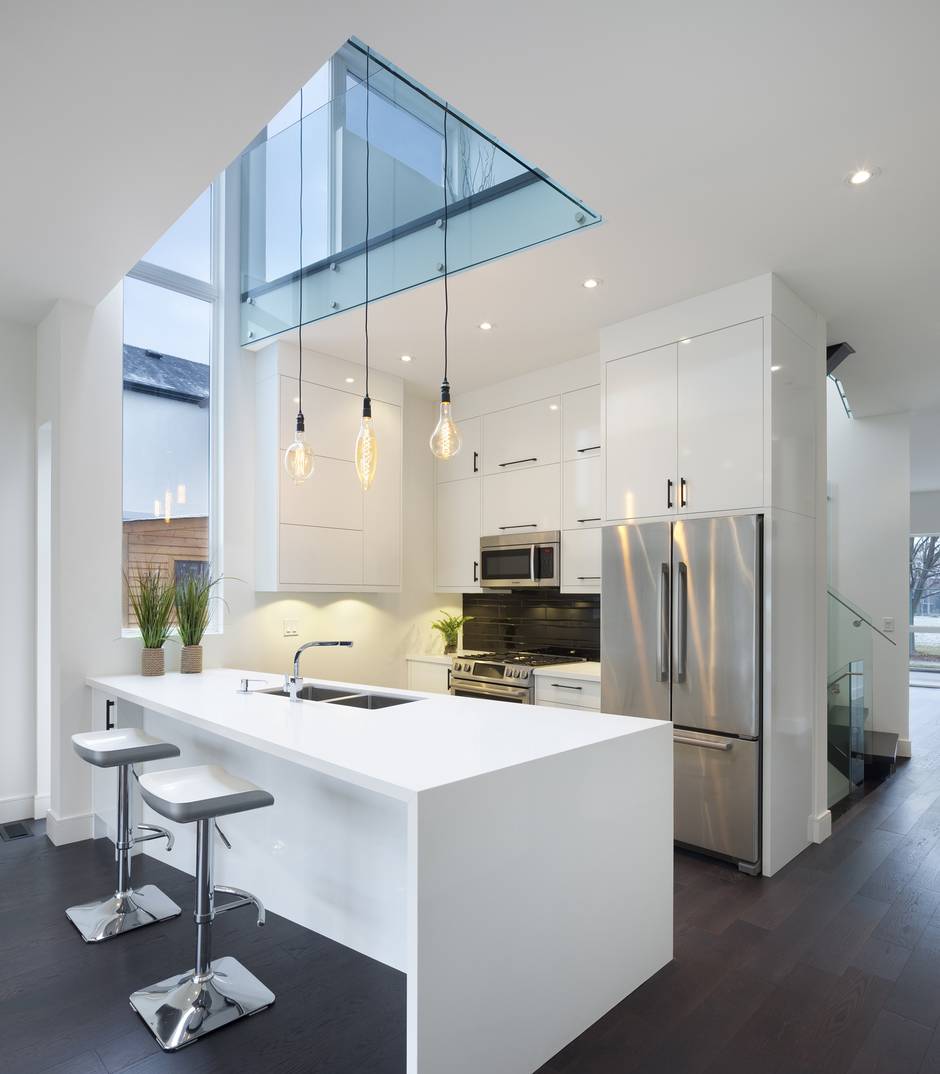 The design of the interior shows a clear openness to light. (Tom Arban)

One theme is openness to light. I’ve recently seen few houses that more resolutely go about capturing whatever sunlight is available. The squarish windows in the bedrooms are large, and clerestory windows crown walls in several spots. There are very tall windows in the glass-framed stairwell, and a two-storey array of them in the kitchen area, which is also illuminated by a skylight high above. More tall windows allow light to filter from the stairwell into the living room. 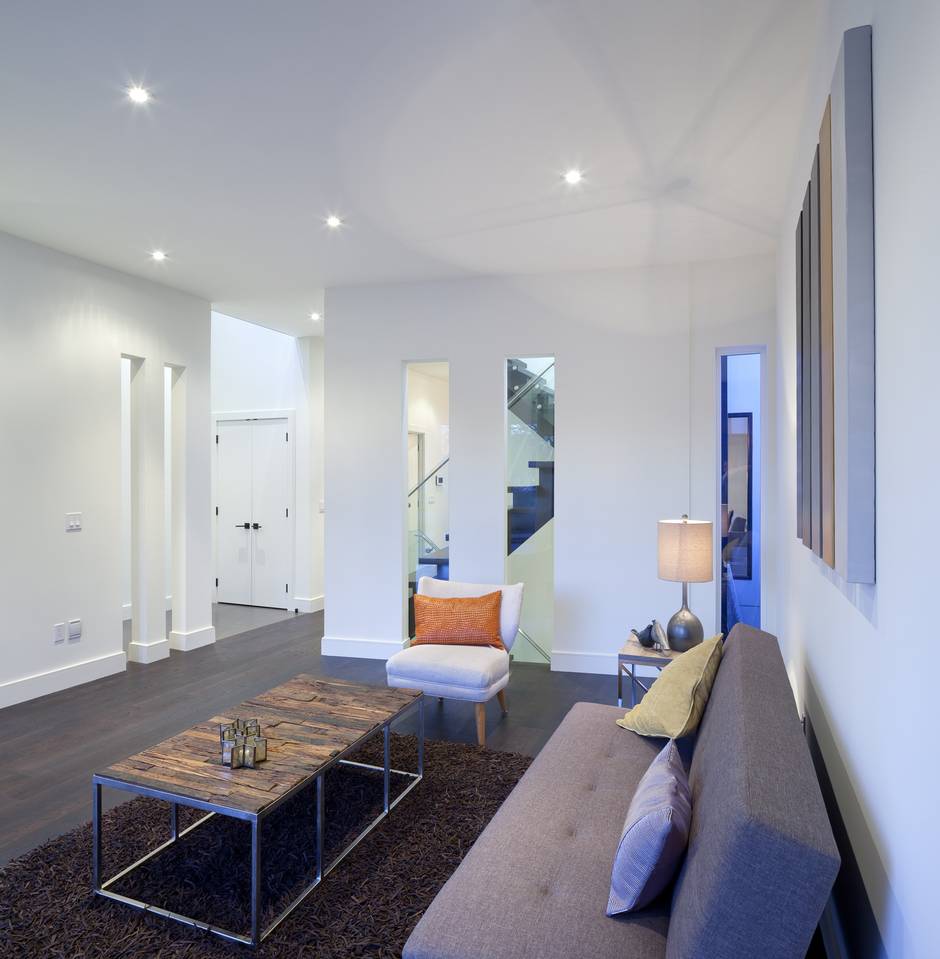 At least it could be a living room. Whether it is one will be up to the couple who have paid just under $1.3-million for these digs and who move in this April. They have a choice of using the room for entertaining, dining, office work or chilling, or something else, because the architects have not prescribed a rigid program for it. Ditto for the space off the kitchen. It has a small firebox encased in a melamine-coated wooden surround, which seems to say “living room” – but doesn’t do so very emphatically. Flexibility on the ground floor is one of the attractive features of the house.

Upstairs, the layout of two bedrooms and the master bedroom suite (which is furnished with a tiny terrace) is, on the face of it, more conventional. In fact, only a bald realtor’s description of this dwelling – two storeys, three bedrooms, three bathrooms, another bedroom and bath in the basement, and so on – makes it sound conventional. 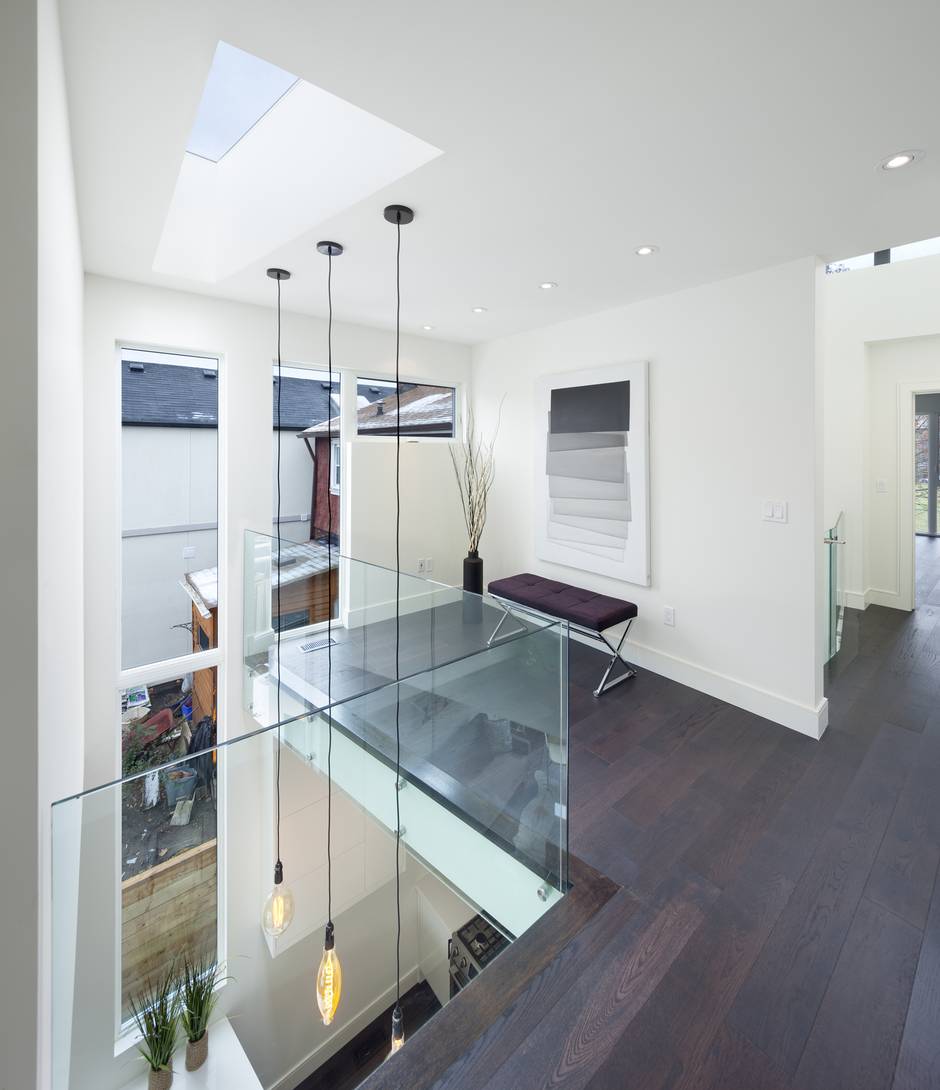 A little, amply sky-lit peninsula of flooring in the middle of the second level, which overlooks the kitchen, extends from the bridge that forms the second level’s axis. (Tom Arban)

To see it, to move through its deftly sculpted spaces and among its angled volumes and voids, on the other hand, is to be continually surprised and delighted. Where less thoughtful architects might have been content to distribute the bedrooms on the second level along a simple, shadowy corridor and call it a day, for instance, Mr. Mahboubi and Ms. Safarzadeh have created a sunny bridge defined by irregularly shaped openings to the floor below. A little, amply sky-lit peninsula of flooring in the middle of the second level, which overlooks the kitchen, extends from the bridge that forms the level’s axis. This place could be used as a home office or playroom or hobby nook – or anything.

A couple paid just under $1.3-million for the house and move in this April. (Tom Arban)

In mentioning some of the elements (especially the angles) that make the house special, I hope I am not also making it seem peculiar or eccentric or uncomfortably irregular. Mr. Libeskind’s Crystal at the Royal Ontario Museum, in other words, this isn’t. The architects have brought to their small project a refined contemporary design sensibility, as well as much common sense. The result is lyrical, restrained where it should be, and fresh throughout.