From development to site selection, the Memorial to the Victims of Communism has been a contentious process from the very beginning. Alex Bozikovic reports. 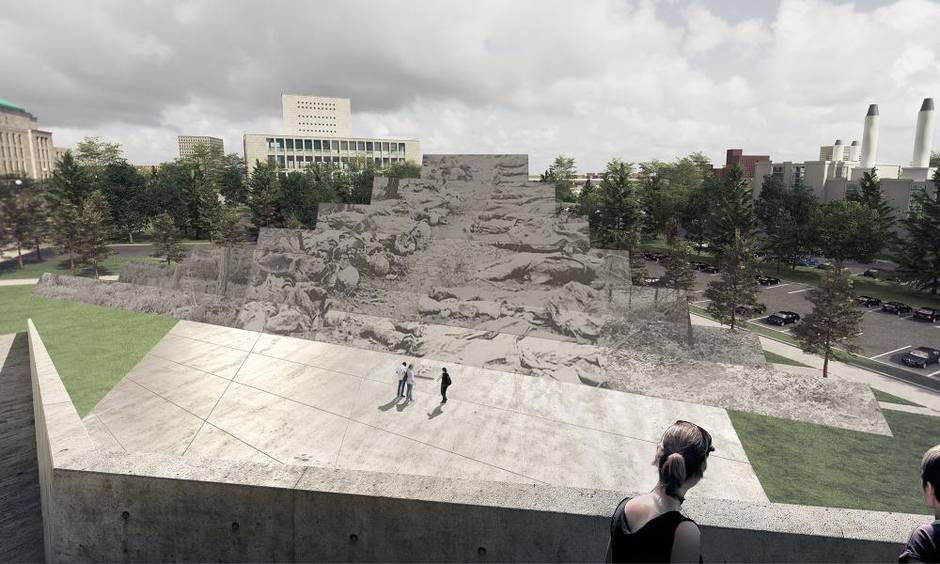 Parliament Hill, the Supreme Court of Canada … and the Memorial to the Victims of Communism. Strange as it sounds, that will be the sequence along Confederation Boulevard in Ottawa if the capital’s newest memorial goes into the ground this year as planned.

The monument could be the second largest in Ottawa, almost matching the National War Memorial in scale, and its planned site lies adjacent to the Supreme Court. It has raised a vigorous debate in the capital and in design circles because of its location, its design and even the process that is bringing it into existence.

The memorial is imagined as a tribute to tens of millions of people, including those who fled communist countries for Canada. It’s proponent is a non-profit group called Tribute to Liberty.


Members of the Harper government have publicly supported the memorial project since 2010. In the past two years, the government has also moved responsibility for selecting the sites and designing commemorative projects away from the National Capital Commission and into the hands of two federal ministries. Critics say these actions opened the door for the nation’s capital to be altered by political whim.

The logic of location

The winning design for the Monument to the Victims of Communism, which is by the Toronto architect Voytek Gorczynski and ABSTRAKT Studio, has two building-sized pieces: an elevated viewing platform and a jagged, sculptural form that bears a large-scale photograph. The image in the first version would have reproduced a photograph of corpses in a Polish forest – victims, bloodied and lifeless, of Stalin’s secret police.

The memorial has stirred opposition from the likes of Supreme Court Chief Justice Beverley McLachlin, Ottawa Mayor Jim Watson and a broad group of architects and urban designers. The arguments against it include criticisms of the design, its site in Ottawa’s ceremonial heart and – ironically, for a project that honours Canadian democracy and the rule of law – an impression that the memorial’s way has been paved more by politics than a long-term vision for the capital city.

An expression of anger over historical wrongs that occurred outside of Canada seems especially out of place on the chosen site. The land allocated to the memorial is 5,000 square metres, big enough for a public building. Decades of urban design plans, as late as 2007, have imagined a courthouse on the lot and the logic seems clear: A new court building would complete a three-part composition (with the Supreme Court and the adjacent Justice Building) that matches the “parliamentary triad” just to the east.

Tribute to Liberty represents a bloc of ardently anti-communist Canadians with roots abroad. Its board largely has personal connections to eastern Europe and its literature is focused on the repressive regimes of the Soviet Union and its puppet states.

Prominent Toronto architect Shirley Blumberg served on the jury that selected the memorial’s design; she agreed to take part, she says, without realizing where the memorial would be, and sees the location as deeply problematic.

“That area is the core of Canada’s democracy, historically and today,” says Ms. Blumberg, who emigrated from South Africa to Canada.

She reads the memorial’s placement as an implied distortion of Canadian history. “If you come from another country and look around, you might think that we’d thrown off the yoke of communism,” she says. “And that’s not our history.”

Given the size and prominence of the proposed memorial, the Royal Architectural Institute of Canada and the Ontario Association of Architects have called for it to be put in the Garden of the Provinces and Territories two blocks away, the original site.

“The siting for this memorial does not make sense,” says Toon Dreessen, Ottawa-based chair of the Ontario Association of Architects. “We’re cutting off our nose to spite our face, making it impossible to use that site as it should be.”

The memorial enjoyed support from the Harper government in early discussions. Jason Kenney, who was minister of citizenship and immigration from 2008 to 2013, attended meetings with potential proponents of the idea, and his office advised backers of the project on how to pitch it to the National Capital Commission, according to reports in The Ottawa Citizen.

As the proposal worked its way forward, the Harper government was making profound changes to the procedures by which commemorative projects in Ottawa are considered and approved.

Until 2013, such decisions were made by the National Capital Commission, which maintains a list of potential sites. But in October of 2013, the Harper government moved commemorations to the Ministry of Canadian Heritage.

In late 2013, Canadian Heritage asked the NCC – in its role as an approval body – to approve the proposed memorial near the Supreme Court, which was not on the commission’s list of sites.

Canadian Heritage even ran the design competition, with a jury that included Ms. Blumberg and the Canadian-American conservative columnist David Frum.

The NCC, which the federal cabinet can overrule, agreed to the site over the objections of its own design committee.

“We were all unanimous in expressing our opposition,” says Paul Bedford, the former chief planner of Toronto, who sits on that committee. “The Wellington Street site is clearly a prime building site and should be reserved for a prestigious building that is part of the capital precinct.”

The proposed Memorial to the Victims of Communism has two parts. A Bridge of Hope (designed to be 14 metres tall, now reduced to 12 metres) would span one corner of the site. Visitors could climb onto it to view the other feature, a broad, ridged concrete form coated with 100 million squares – one for each of the victims of Communist regimes, architect Voytek Gorczynski of ABSTRAKT Studio explains.

The folded-plate form produces dark cavities between the memorial and the ground, which would be covered with gravel. These would have to be fenced off for security and safety reasons. Mr. Gorczynski suggests a steel mesh would cover the ends. The likely result – which is imagined in three-dimensional renderings of the space – would be several glum, prison-like caverns. Coloured LEDs would illuminate them at night or on special occasions. On the memorial day for the Ukrainian Holodomor, he suggests, they might be yellow and blue, the colours of the flag of Ukraine. 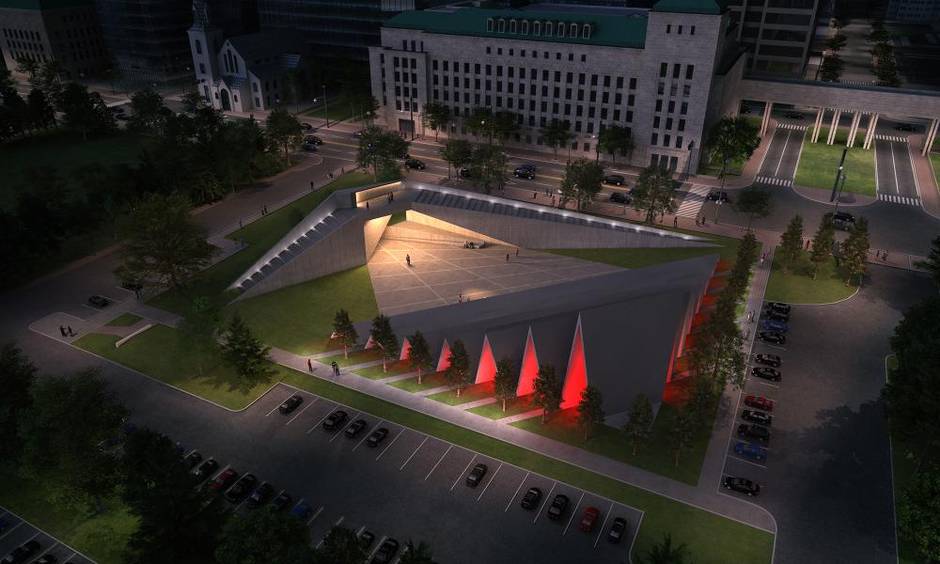 Viewed from the bridge, the surface of the concrete folds would resolve into a pixelated image. What it would be remains in question.

The competition entry featured a depiction victims of the Katyn massacre, in which the Soviet Union killed tens of thousands of Polish officers and civilians during the Second World War. The design is evolving; Mr. Gorczynski said he is under pressure from staff at the Department of Canadian Heritage to use one that is less brutal and presents a positive image of Canada. (An early document for the design competition gave the project the subtitle “Canada, a Land of Refuge.”)

Such a change could make the monument incoherent. Its form and materials speak very deliberately of rupture and suffering.

The design was chosen from only 20 submissions. The government’s request for proposals had strict limits on the nationality and the expertise of the people involved, which helped narrow the field. (When Maya Lin won the competition for the Vietnam Veterans Memorial in Washington in 1980, she was a student, and her anonymous entry was one of 1,421.)

A donor wall managed by Tribute to Liberty, with plaques carrying the names of anyone who contributes more than $1,000, could cheapen the design. Such a private intervention would have been against the National Capital Commission’s rules, but Tribute to Liberty lobbied for those to be changed in 2012.

Ottawa residents and all Canadians should hope for a move that puts the memorial into a different context. The government might even look to Washington for guidance. Under the George W. Bush administration, the District of Columbia acquired its own memorial to the victims of communism – inspired by the Goddess of Democracy statue student protesters built in Tiananmen Square in 1989.

It is a statue on a street corner. It would fit very comfortably on Confederation Boulevard.