The gentrification craze that began sweeping through Toronto's inner-city Victorian neighbourhoods 40 years ago was kind, generally speaking, to old streetscapes and house fronts, but much less gentle to what lay behind those façades.

If not forgivable, however, the stripping of interiors back to the bare bones in the name of "renovation" was understandable. Our bewhiskered great-grandfathers liked their living area diced up into clearly defined rooms, each with its distinct wallpaper, trim and decor. Modern taste circa 1970, in contrast, decreed that a house's space should flow freely from stem to stern, and that structurally necessary walls – the others were demolished – should be sandblasted down to the raw brick or painted stark white.

In their modernizing zeal, the pioneering fixer-uppers who took over Cabbagetown and other derelict 19th-century districts often renovated the character right out of their elderly properties.

The gutted interior, however, appears to have become less fashionable among homeowners than it was before the turn of this century. Younger fans of Victorian façades want their houses to be fresh, open and efficient : Nobody longs for the cramped kitchens and ill-lit bedrooms and washrooms of old times.

But it may be that some would-be dwellers in Hogtown`s antique housing are looking for more than standard modernity . They want interiors with something of the historic distinctiveness that one readily finds in the exteriors that have been better preserved.

One man who believes that such discriminating home hunters do exist in the marketplace is Mac Champsee, president of Toronto-based Rainbow Realty Ltd. and the developer (along with Sonal Champsee, his daughter) of an especially lovely, thoughtful condominium conversion at 103 Pembroke Street, west of Cabbagetown and just south of Allan Gardens.

The building at this address is a large, dignified Gothic revival home put up for a well-off local tea broker and his family in 1879 – and launched in that year on a career that has seen the sturdy old mansion plunge from the heights to the depths and, now, come back up again. After the prestige of the district collapsed early in the past century, the structure became a rooming house.

The basic shapes of the three units now for sale (plus one more, currently occupied) were carved from the yellow brick building in the 1980s and rented out. The roof was shot, the foundations were creaky, and the interior was a mess when Mr. Champsee's group bought the place five years ago, and began undoing decades of neglect and transforming the apartments from dumps into the spacious, comfortably conservative condos they are today.

The three available suites have much in common. Each is 1,400 square feet in area, and each has a ground-level entrance. Crafted by interior designer Linda Boorman, each apartment is clean-lined and open enough for any contemporary city dweller, but the elegant crown mouldings, baseboards and generous Victorian windows gracefully connect the unit's modern present to its architectural past. Each suite contains two bedrooms, two and a half bathrooms, a gas fireplace framed by marble-textured ceramic tiles, and maple floors. Every unit comes with a parking space in the garage at the rear, and there are other shared features.

That said, no two units here are exactly alike, and the differences are significant. One of the suites, for example, opens into a perky new gazebo (which has replaced an older, ill-fitted one) perched on the sunny southwest corner of the house, overlooking the front garden and the street – an ideal inner-city spot, I imagine, for lingering in the long twilights of Toronto's summer days. An attractive element in the walk-up apartment (entered from the paved yard at the back of the house) is a small deck off the kitchen, an intimate place above and apart from the city, but still nestled (as balconies in high-rises are not) in the dense weave of the urban fabric.

In Mr. and Ms. Champsee's interesting project, potential home buyers are being offered large, svelte but lightly old-fashioned downtown condominiums at prices – in the $600,000 to $700,000 range – that would get them considerably less elbow-room in a typical new tower. Of course, anyone moving to Pembroke Street should be thoroughly city-proofed: The once-posh residential neighbourhood has long been a rough part of Toronto's inner east side. But downtown veterans unfazed by the district's reputation for rowdiness will probably be delighted by these tall-ceilinged flats, which have been designed with urbane flair and with attention to architectural heritage that was too often missing in Victorian overhauls of the 1970s. 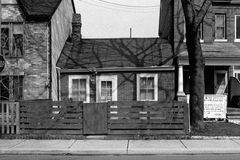 In Toronto, a modest Modernism wins out over faux Victorian
February 9, 2012 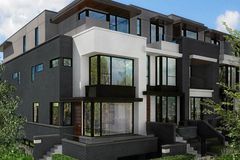 Manly Modernism meets hard-hat heritage in a penthouse loft
May 3, 2012 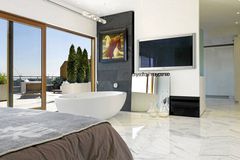