Imagine hunks of Montreal greystone, fractured, scattered and then lifted into the air. Now imagine this mineral mass held up by a lattice of textured wooden trusses: a piece of the earth, resting on brawny woodwork, defining a grand shelter for the community.

That is the scene at the new soccer stadium in the city’s St-Michel district: an amateur sports facility that is one of the most ambitious and beautiful new public buildings in Canada. Designed by architects Saucier + Perrotte along with Vancouver’s HCMA, it shows Montreal’s and Quebec’s culture of design at its most ambitious and successful. 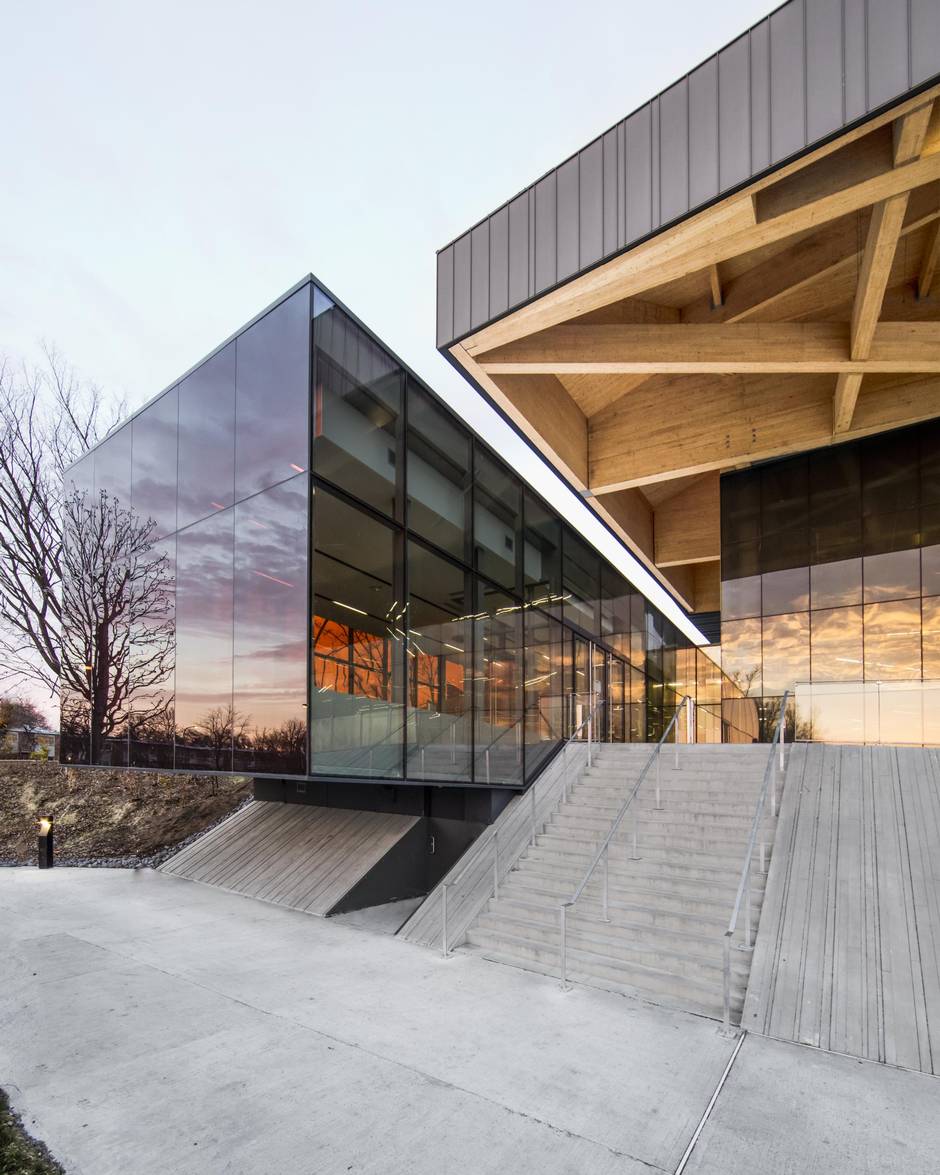 (All photos by Olivier Blouin)

The project came out of high civic ambitions. In 2011, it was the winning design in a city competition aiming for design excellence, sustainability and a new anchor for a massive new public park. “The purpose is an interior soccer field but also a pavilion for people to gather,” Gilles Saucier, the project’s lead architect, explained during a tour a few weeks ago. “And that’s interesting, I think. You can do a sports facility with just one way of thinking, or you can consider what a building brings to the community. This is a way of doing a sports facility that is very much something else.”

This building is something else.

It is about 118,000 square feet, housing a full-size soccer field that can be divided for use by local youth players. But it’s also a profound piece of architecture. Saucier – unquestionably one of the country’s best form-makers – placed the building on a green berm along Papineau Boulevard, where it faces off boldly against the suburban street of houses and walk-up apartments. Two glassy lobbies tie the building to the road, and the roof’s complex geometry of folded triangles also reaches out to define covered public plazas, before touching the ground and continuing as bleachers for the adjacent outdoor fields. You can clearly see both the zinc surface and the wood structure – these sober, elegant materials garnished with some neon orange glass in the main lobby. 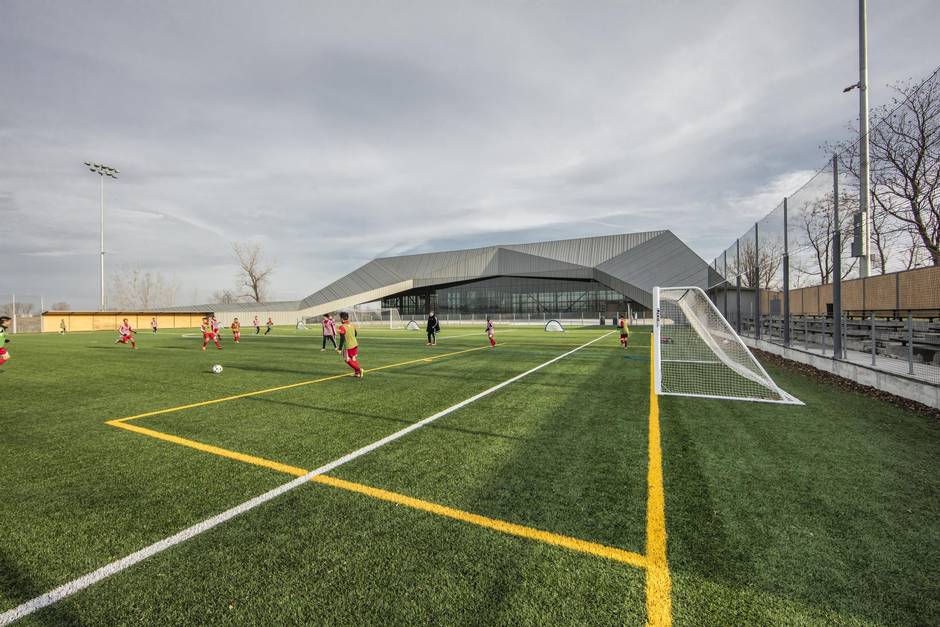 As Saucier walked me inside, the building revealed itself as a grand open expanse, lined by glass walls on three sides. The roof above is a dramatic composition in itself, held up by a lattice of wood box beams that crossed at random-seeming angles and stretch as long as 69 metres. This is the work of Quebec fabricators Nordic Structures, a uniquely large-scale and sculptural use of engineered wood. This genre of structure combines pieces of cheap softwood into a large, strong and lightweight structure that has a vastly lower carbon footprint than steel. This could and should be an important new line of business for Canada’s forest industry.

That roof extends out beyond the edge of the building to provide overhangs that block direct southern and western sun. The building has no air-conditioning system and yet, thanks to this use of architectural common sense, was comfortably lukewarm on this blast-furnace summer day. This is one of the sustainability features that earned the building a LEED Gold certification. 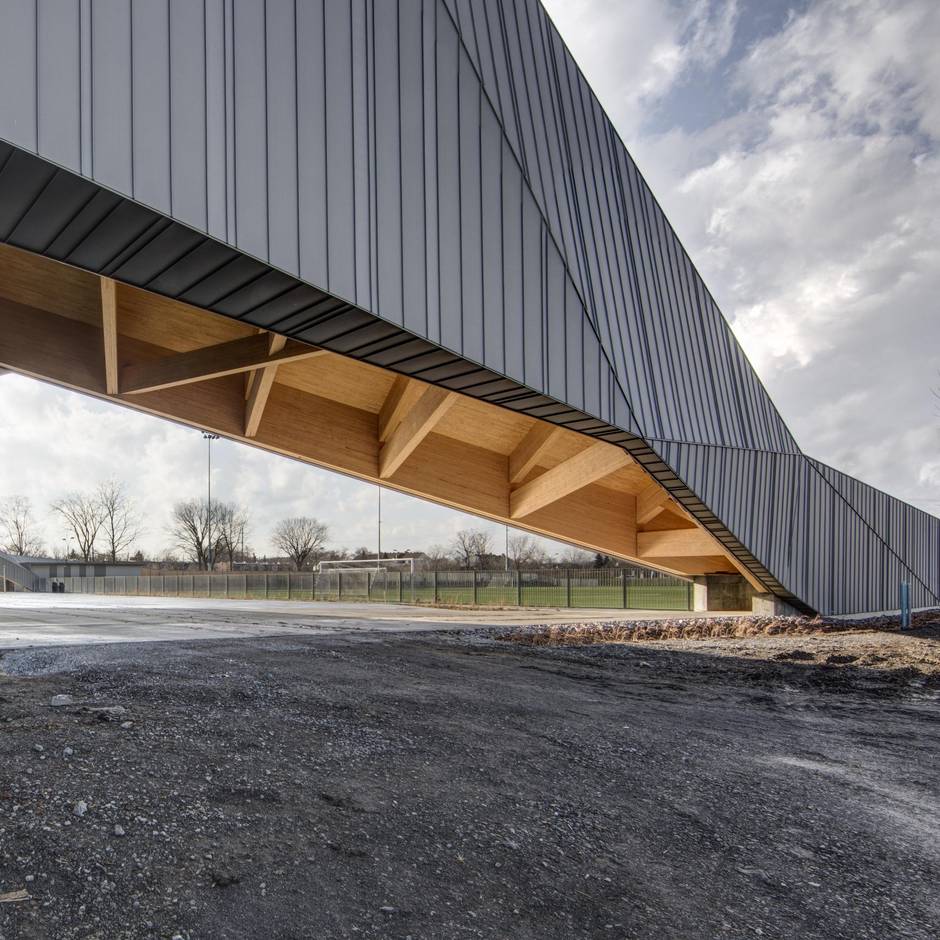 Looking through the windows, I could see how the building connected to a big hole behind it: the former Miron quarry, which for half a century supplied much of Montreal’s trademark greystone. It also became, from 1968, a large and increasingly unwelcome waste dump. This, as Saucier reflects, was not much of a deal: “You take stone to build, and you send back garbage,” he says with a laugh. “But the situation is changing now – it is coming back to something natural.”

That’s because the site is being transformed, slowly, as the Complexe environnemental de Saint-Michel. By 2023, 153 hectares of the 192-hectare site will be a park, and the city’s second-largest after Mont-Royal. This represents the current generation of large urban parks, which often occupy “brownfield” industrial or infrastructural sites. For now, it’s already home to a building housing TOHU, a circus arts organization, and a new indoor skatepark designed by Atelier Pierre Thibault. The latter, next door to the stadium, is essentially a metal shed. The soccer stadium could have been much the same: forgettable. Instead, it is a showpiece. 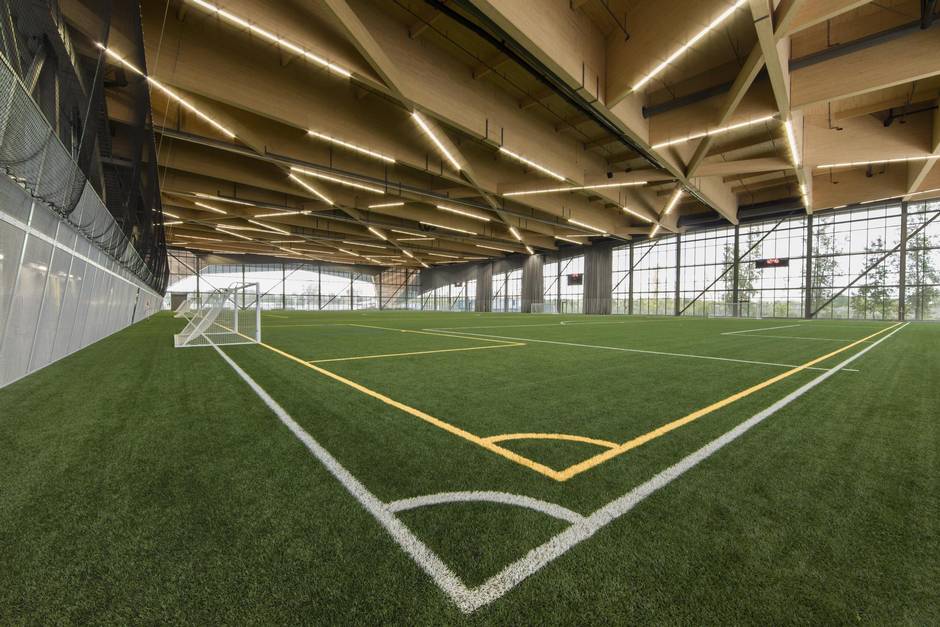 The stadium, conceived under the administration of mayor Gerard Tremblay, has been harshly criticized for its cost. After the design competition, the (very low) planned construction budget of $28-million grew to $32-million; in the end, while the stadium is a larger project than was originally planned, the construction costs rose to, according to the architects, approximately $38-million.

Yet while the architects, engineers and contractors worked together to reduce costs, the city remained committed to the integrity of competition process. The scheme that won the competition is, largely, what got built. “They did the right thing,” Saucier says of the city, “and that isn’t always the case.” 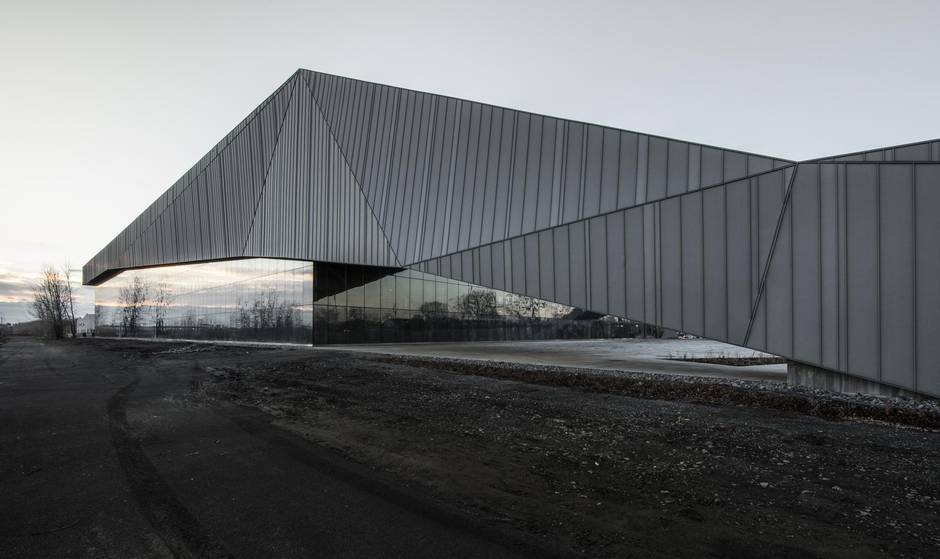 Are there cheaper ways to do a building such as this? Absolutely. It’s also possible for a government to hire skilled designers through a different process, as does the City of Edmonton, and get excellent results. (Saucier and Perrotte is now building a major civic project there.)

But the City of Montreal didn’t ask for cheap; it specifically asked for great, and followed through. And the result is architecture for the ages, a strong statement in itself and a poetic complement to a major park. “It captures the one side, park, natural life,” Saucier muses, “and this other side, which is memory, history, a man-made creation.”

The zinc panels are scored with vertical lines; these rhyme with the scoring marks on the adjacent limestone cliff, and even the crystalline paths of the wood beams above. It all feels faintly random, almost like the work of nature, but it is absolutely art.