The “official” Toronto double-decker sightseeing bus trundles up Yonge Street and sprouts a dozen camera-clutching limbs as it squeaks to a semi-halt near the Toronto Reference Library. A tinny voice announces, in rote fashion, the building’s function and architect, then perks up as it tells tour-goers about the quality of the Balzac’s coffee inside.

As it belches a grey cloud and turns left into tony Yorkville, a much more interesting tour – a private one given by Michael McClelland to this writer – continues on the sidewalk. 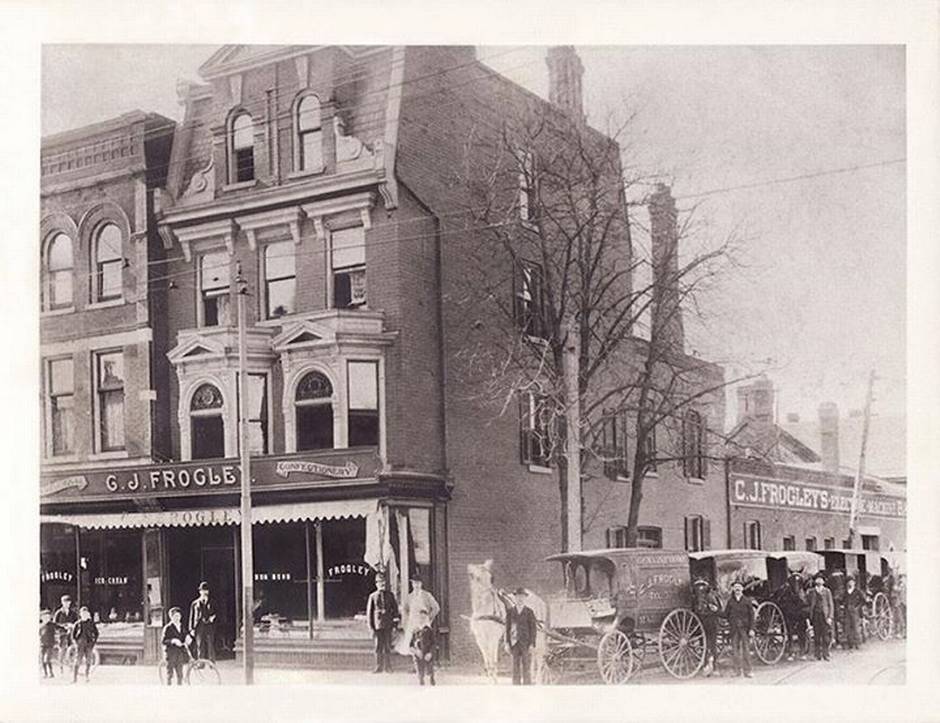 C.J. Frogley Bakery, 850 Yonge St., c.1880. It was under Frogley's tutelage that George Weston apprenticed in the bakery business. Until recently, the building was home to The Cookbook Store. It stands directly across Yonge from the Toronto Reference Library. ERA Architects is using this as the key image in its restoration work for the Yonge and Yorkville project. 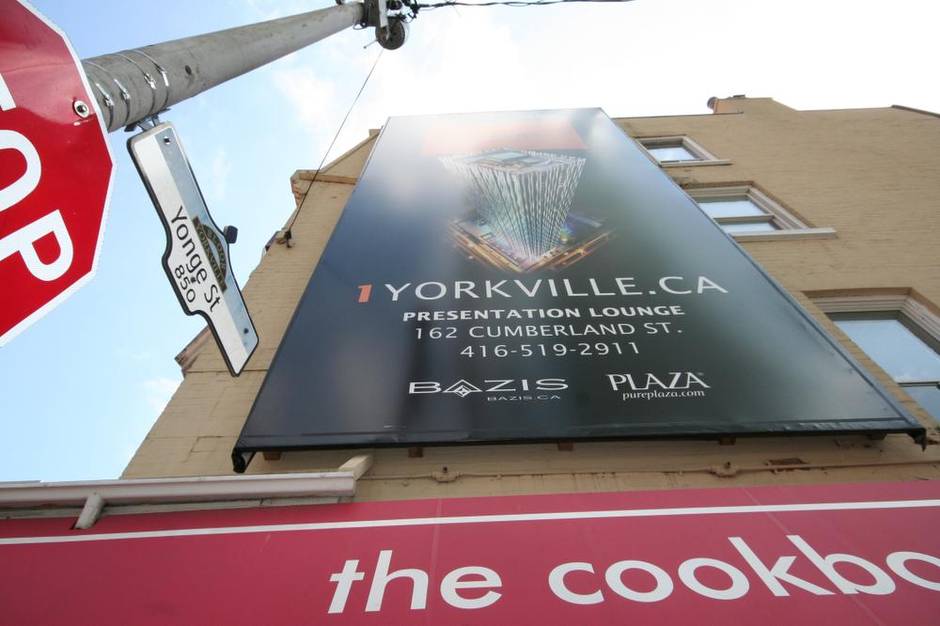 All photos by Dave LeBlanc for the Globe and Mail

The affable sixty-something architect points to the entire block of three-storey, mid-19th-century buildings across from the library. All will soon be absorbed into a condominium development, No. 1 Yorkville by Bazis and Plaza, and Mr. McClelland’s firm, ERA Architects, is responsible for restoration of the heritage component. It’s a position they often find themselves in a city waking up to the economic benefits of historic architecture.

“It’s just part of doing business now,” Mr. McClelland states. “Heritage is regarded as a major player … it’s not like ‘What percentage [of the total] cost is it?’ any more; we’re not building something cheap and dumb, we have to build in a quality environment, so I don’t think [developers] pull heritage out as a line item.”

Other cities either do straight-up demolition, or they can say ‘No, we’re not doing anything’ because they have the ‘luxury’ of not having any development. In Toronto, if you said, ‘Hey, let’s not have any development,’ who actually pays to keep [these buildings] going?
Michael McClelland, ERA Architects

The interesting thing here, however, is that the shiny new tower will play second fiddle to the elderly storefronts by tucking to the rear of the site. More interesting, this model is becoming a uniquely “Toronto” one: “We’re doing this more than anybody else,” Mr. McClelland confirms. “There’re some examples of it in New York, but not a whole street. “Where it’s possible to happen, it’s going to happen on Yonge Street.”

He’s not kidding. As we walk south, Mr. McClelland points to just about every corner between Bloor and College and informs me that there’s an application “in process” for yet another condo tower – and all will shoehorn in behind the historic streetwall. 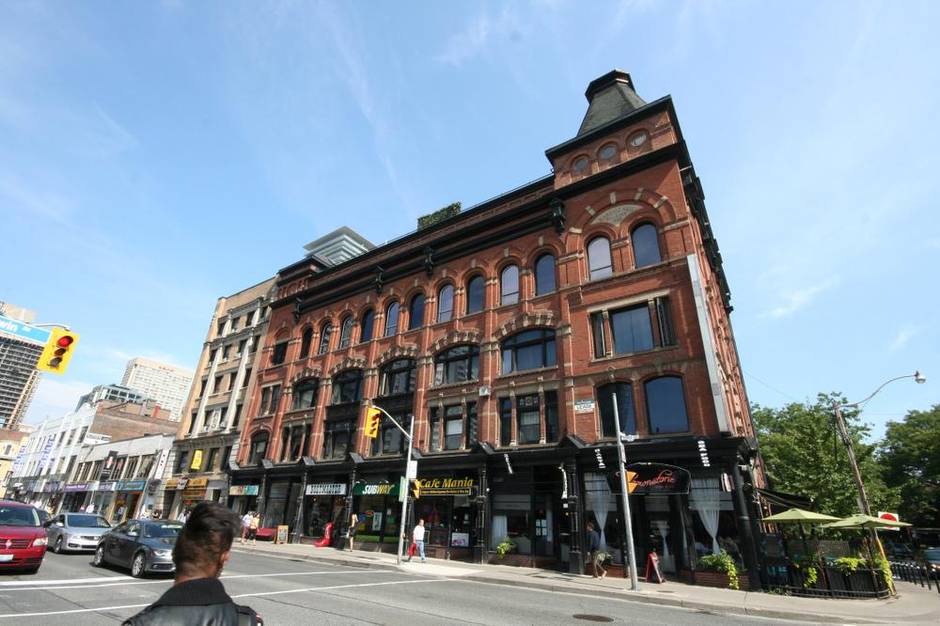 One in particular, at the northeast corner of Yonge and Gloucester, will see the 1888 Masonic Hall (Gloucester Mews) preserved in order to make possible a tall Hariri Pontarini residential building facing onto Gloucester Street. Among other things, the old building will receive new, patterned slate shingles on its tapered octagonal roof, and the cast-iron retail façade will be lovingly restored. Fans of modernist heritage should note that Adamson Associates renovated the handsome five-storey building in 1972, and it was then that a link to the Bay-and-gable homes at Nos. 8 and 12 Gloucester St. was created. According to a City of Toronto report from March, 2013, the 1868 Charles Levey homes will be “rehabilitated for commercial uses through a strategy of partial retention and reconstruction” and moved forward by four metres.

And since obliterating their original footprints will surely anger some (the same can be said of the retail shops at No. 1 Yorkville), Mr. McClelland counters: “People criticize Toronto and say, you know, you’re doing all these weird things with buildings, but the truth of it is we’re trying to make a balance happen.

“Other cities either do straight-up demolition, or they can say ‘No, we’re not doing anything’ because they have the ‘luxury’ of not having any development. In Toronto, if you said, ‘Hey, let’s not have any development,’ who actually pays to keep [these buildings] going?” 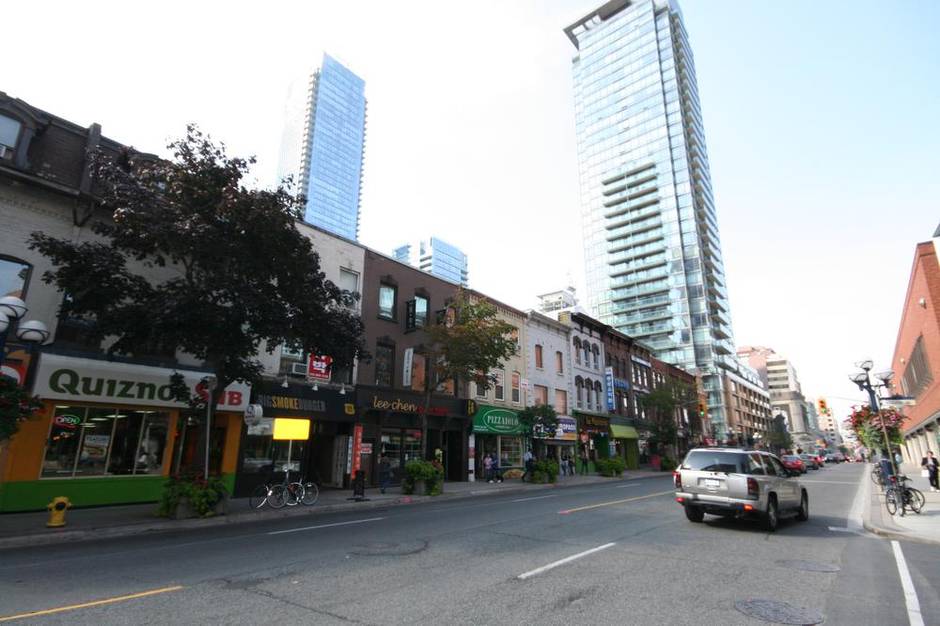 It’s a well-publicized fact, of course, that Toronto leads North America in construction of high-rise towers. A report from January this year placed the number at 130, compared with New York’s 91 and Montreal’s 25. In August, 2014, city council approved an additional 755 storeys of new construction (not all residential) as developers rushed to get applications in before the election break.

But why did it take so long for builders to “discover” Yonge Street? This is our city’s spine, its nervous system. In the 1940s and 50s, it was a confident neon jungle filled with the beating drums of jazz music. In the nervous and unstable 1970s, it reflected the mood of the time with seedy head shops jostling for space with holdovers from the optimistic 1960s. By 1977, it was the logical place to erect Eaton’s shopping palace, but it took two more decades until we noticed it again, when Brown & Storey’s Dundas Square was announced. As for residential development, another decade would pass until the project at Yonge and St. Joseph Street by Graywood and MOD Developments, FIVE, was announced (currently under construction, heritage heavyweights ERA consulted on the small retail shops from 606 to 618 Yonge). 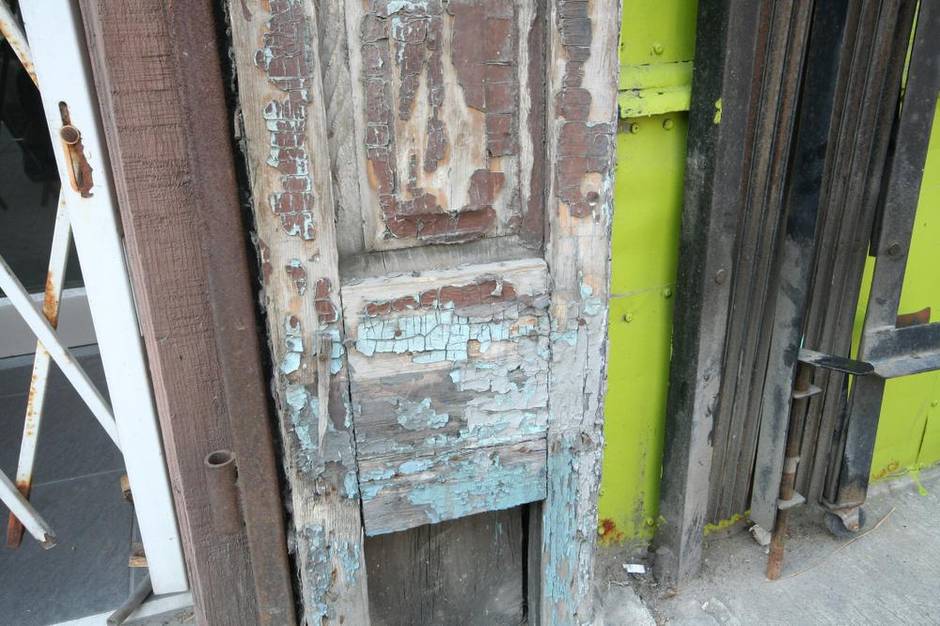 The original woodwork on many of the Yonge Street heritage storefronts is badly deteriorated. 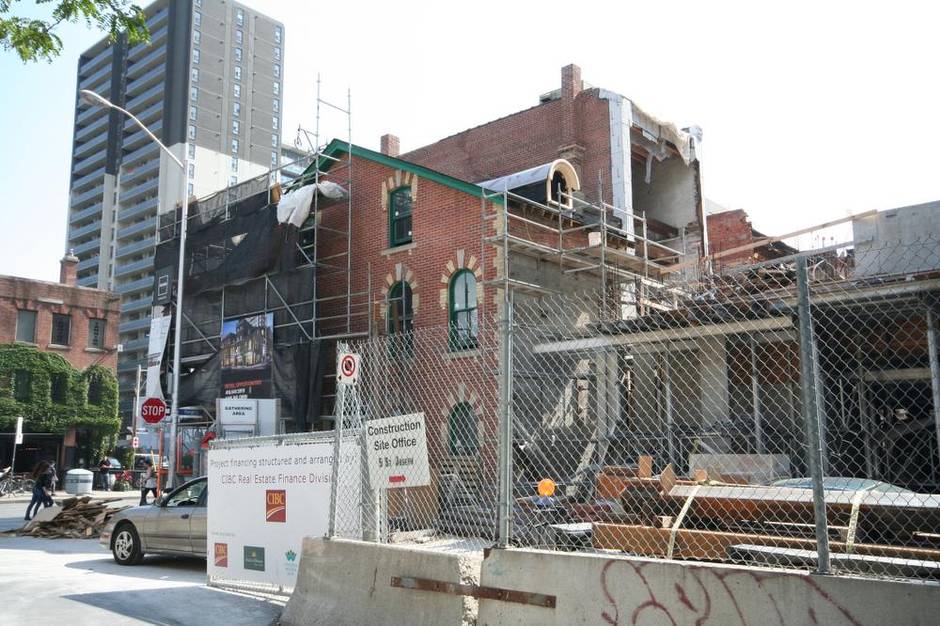 Rear of retail restoration at FIVE, a residential development currently under construction at Yonge and St. Joseph Street by Graywood and MOD Developments, with input from ERA on the heritage preservation of retail shops from 606 to 618 Yonge.

The reason, Mr. McClelland explains, is that the “small, divided ownership” of properties had, historically, made it too difficult to assemble land for redevelopment. He adds that Yonge’s “tawdry” past might have taken it off the radar as well; as proof, he notes that a large stretch of Yonge didn’t even have a business improvement area because “you couldn’t get everyone together on stuff.” 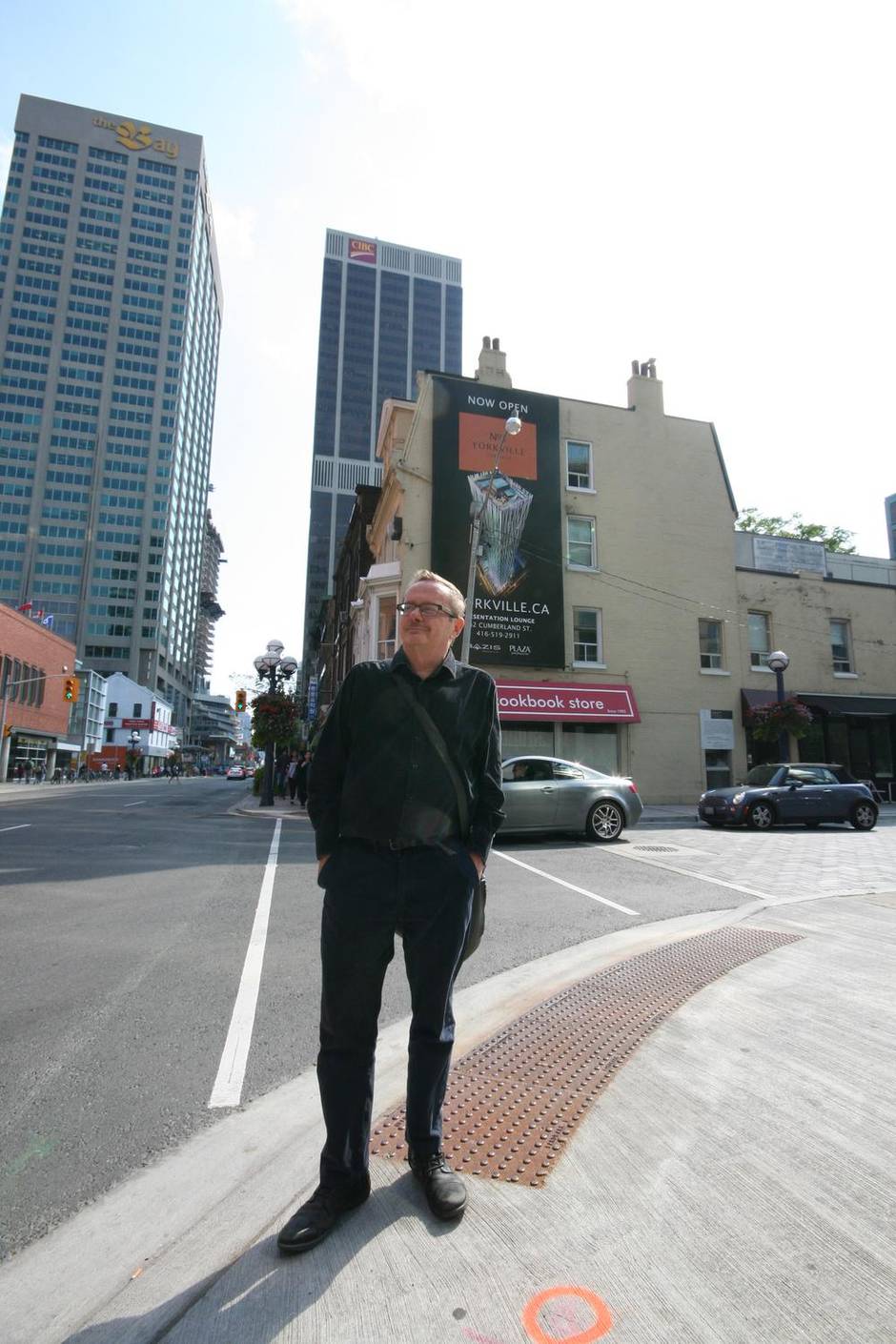 While the view from the tops of double-decker tour buses will certainly be more impressive, Mr. McClelland suggests that we need to think of the city as more than just the downtown core: “I think the strategy is to make more of this city accessible for people, so that artists can be living in cool parts of Scarborough, and cool parts of Etobicoke,” he finishes. “We have a whole bunch of under-serviced parts of the city.”