Zaha Hadid, a singular figure and the most prominent woman in the world of architecture, has died. She was 65.

According to a statement from her office, Hadid died in a Miami hospital Thursday morning, having suffered a heart attack while being treated for bronchitis.

Hadid was brilliant, often impolitic and radical. Winner of the Pritzker Architecture Prize in 2004, she was a leader in many respects: Her language of flowing, complex forms and her innovative use of computers in the design and building process made her a pioneer, and – for better and for worse – she has been widely imitated for two decades.

In recent years, her designs for the London Aquatics Centre for the 2012 Olympic Games, the MAXXI museum in Rome and the Heydar Aliyev Center in Baku, Azerbaijan, were all hailed as formal masterpieces: expensive and sometimes impractical, but unquestionably advancing the art of architecture.

Hadid, born to an affluent family in Baghdad in 1950, was educated at European boarding schools and then the American University of Beirut before attending London’s prestigious Architectural Association School of Architecture. Hadid established her own office in London in 1979, a moment when an economic downturn and an intellectual malaise were plaguing architecture. She became a prominent avant-garde figure during this era of so-called “paper architecture,” alongside figures such as Daniel Libeskind. 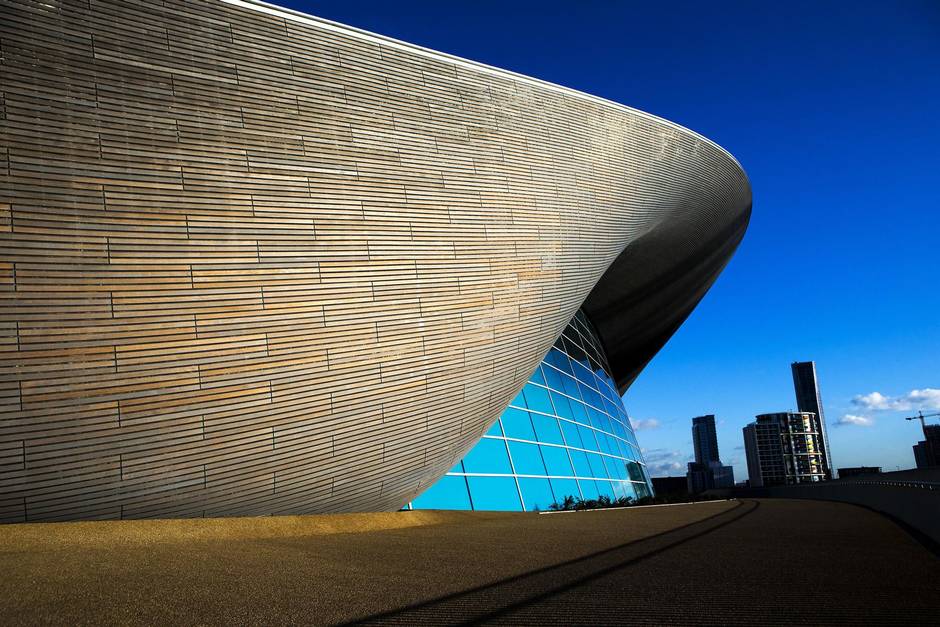 Her 1983 drawings for The Peak, a private club in Hong Kong, which broke down a building’s form into a “man-made polished granite mountain,” were seminal: They set out an ideal of complex beauty, and an architecture of abstract forms, at a time when corporate glass boxes ruled the landscape. (Those drawings are in the collection of the Museum of Modern Art in New York.)

“Her drawings and paintings were just gorgeous,” says Betsy Williamson, a partner at Williamson Chong Architects in Toronto. “For students in the early 1990s, that work was inescapable.

“Her influence for my generation was pivotal, even before she began to build.”

Hadid spent the 1980s largely in academia and continued to teach at architecture schools including those at Harvard, Columbia University and the University of Applied Arts in Vienna – and, briefly, at Carleton University in Ottawa.

Hadid’s first built work was a fire station at the campus of furniture company Vitra in Weil Am Rhein, Germany, in 1993, part of a collection of bespoke buildings that would include colleagues such as Frank Gehry. The fire hall was a collection of concrete triangles that form a dramatic abstract composition, playing games with perspective and scale.

Here she began to realize the design language that she, and her pugnacious office partner Patrik Schumacher, called “parametricism.” This continued at scale in the late 1990s and early 2000s, when advances in software made it more practical to design and build those forms. 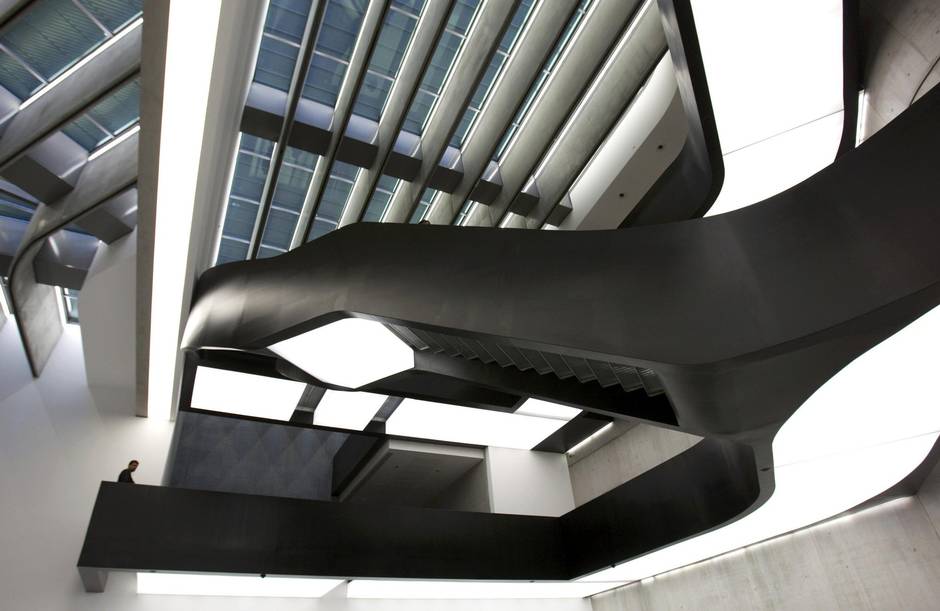 Inside the MAXXI museum in Rome. (Max Rossi/Reuters)

Such work was inevitably complex: Her studio produced buildings that relied on customized components and unique details, and this constant innovation demanded commensurate workmanship and expense. But the effect could be startling. The critic Herbert Muschamp called her Rosenthal Center, a 1997 museum building in Cincinnati, Ohio, “the most important American building to be completed since the end of the Cold War.” Inside, he wrote, “you gain the dream sensation of breaking through a solid membrane into an alternative world.”

Larger projects were sometimes troubled by their pursuit of innovation. Last year, her firm lost the commission to design Tokyo’s main stadium for the 2020 Olympics after the design, following two years of work, was judged too expensive to be realized.

But Hadid was not one to allow her aesthetic vision to be diluted. “I don’t like the word compromise,” she said at a public forum in Oxford this month. This was a trait for which she was harshly judged as a rare female leader in the world of architecture.

In a book to be published in April, Where Are the Women Architects?, the architect and scholar Despina Stratigakos asks why women are so poorly represented in a profession they have been able to enter for 140 years. 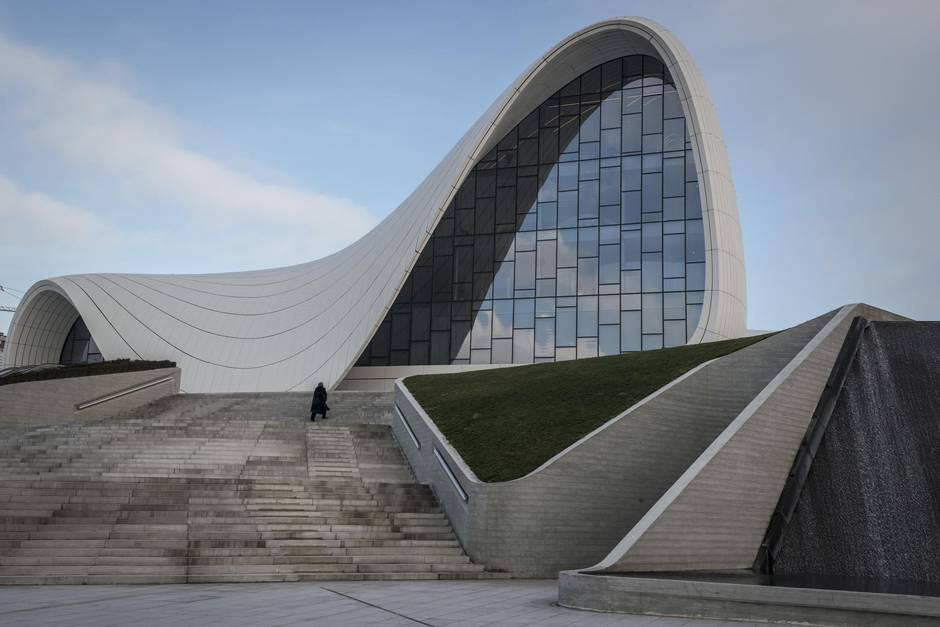 When Hadid won the Pritzker in 2004, Stratigakos writes, “not a single journalist failed to mention her gender.” She cites a contemporary feature by the Guardian writer Stuart Jeffries: “Where is the vibrant monster I’d been promised.… Where’s the ball-breaking harridan barking abuse in Arabic into her mobile as she wafts into her North London studio in vertiginous heels?” She would wind up, Jeffries wrote, “workaholic and single … destined to have only one long-time companion – galloping influenza.” Such an account, Stratigakos writes, “reveals an uncomfortable effort to position her in relation to the masculine mould of the star architect.”

This is certainly true: Hadid became the lone woman among the so-called “starchitects” of her generation, including Jean Nouvel and Gehry, while they often escaped censure for their ambition and temperamental behaviour. But Williamson – herself a finalist for the Architects’ Journal 2015 Emerging Woman Architect of the Year Award – says it would be wrong to cast her primarily in those terms. “She was simply one of the greatest living architects that we had.”

“There was a disjunction between her imagining of great things, and the realization and building of it,” says Larry Richards, the former dean of architecture at the University of Toronto. “I think there are strong questions about that, in her case. But it depends on what you choose to emphasize.

“She was bold as a person and bold as an architect: She was a force, in the best sense, in architecture and she’ll be missed enormously.”