Ten years ago, Edmonton designer Matt Heide had a vision for the future, and it was one word: concrete.

His dream was not only to prove the viability of concrete as a material for homewares, but also to demonstrate its beauty. With concrete waste left over from a side job in construction, he began moulding tableware, candleholders and sculptures, mixing up high-performance concrete with mineral pigments to give it a watercolour finish.

Eventually, he left construction and formed an atelier with his wife, Shawna, buying bagged mix from Home Depot. They called the business Concrete Cat, and by Heide's estimation, it was, for a while, the only company experimenting with concrete on a small scale.

It's hard to imagine the idea of concrete china landing without a big thud. It's in the name. But that, Heide says, is just semantics.

"Concrete is infinitely pliable and malleable when wet but once it cures, it's incredibly strong, durable and incredibly light," he says. "We use it to create a lot of things people don't expect. The world has already decided what concrete should look like, so when we do something new with it, most find it so unbelievable that they just decide it's not concrete."

Regardless, people are buying in, and buying it. Concrete Cat products are sold at Barneys New York and Urban Outfitters, featured in magazines from Wallpaper to Women's Health. It might be considered the new plastic, if not for one hitch: It's nearly impossible for designers to source.

The concrete industry is not built for studios making homewares. Suppliers are virtually all multinationals, selling quantities in tons. By contrast, some of Heide's designs weigh less than a pound.

"All these civil-engineering projects use hundreds of tons of concrete at a time," he says. "We use between 10 and 15 tons a year and we're the biggest studio of our kind. That's very little incentive for a supplies company."

Slowly, though, a micro-industry has begun to form around the micro-users.

A few years ago, Heide discovered Concrete Concrete, the side project of a large Edmonton concrete purveyor that deals in ultralight, high-performance, museum-grade mixes for, its founder says, "a love of concrete and wanting to see what artists would do with a high-grade concrete mix if it was available to them." Recently, the founder – who prefers to remain anonymous – began packaging the mix in quantities as small as 2.5 kilograms for the creative market, incorporating eco-friendly materials such as agriculture byproduct.

"An important part of our mix is the speed at which it sets up and the ease at which it finishes," he says. "This makes projects wrap up quicker and keeps facilities cleaner … factors for a home user who might be working in their kitchen."

The 12-hour turnaround has made all the difference for Heide. "That alone has made our business viable, being able to run product on 24-hour cycles. With the Home Depot concrete, we needed to let things cure in moulds for seven to 12 days."

Other conglomerates are less clandestine. Lafarge, one of the world's largest aggregate suppliers, first developed Ductal, its ultrahigh-performance concrete (UHPC), 25 years ago for the engineering and architecture markets. Whereas traditional concrete incorporates stones of half-inch thickness, Ductal's largest elements are the size of a grain of sand, picked specially for their roundness. The mix requires less water, improving the flow of concrete and increasing the strength. Super-strength means it can be used in fine applications without rebar (the steel bar or mesh of steel wires used as a tension device in reinforced concrete), making it a decent alternative to wood.

Ductal would never sell by the kilo. But recently, some of its smaller precasters – the customers that precast the raw material to sell onward – began dealing in the stuff for designers using it in thinner, more delicate moulds.

And so Ductal finds itself, by proxy, in a market without any significant rivals. "For furniture, our only competitors are stone, steel and wood," says Kelly Henry, a Calgary-based business development manager for Lafarge.

"It's not something we would focus on, but that doesn't supplant our ability to supply [small precasters]. If one of our licensees requests a small quantity, we're not going to not sell it to them. It's not killing us to supply them an extra bag every month to do a side project while we supply others with tons."

What's in it for the precasters? UHPC costs more than regular concrete, but its strength in thin applications means designers are using less of it. Besides which, the soaring prices for some high-spec concrete design make them "a very nice margin," Henry says.

Italians, no stranger to high-margin design, have dabbled in architectural concrete for decades, although homewares are still a relative novelty. Italcementi launched its design-grade concrete, Effix, nearly 20 years ago, but only recently opened a research and innovation centre in Bergamo, where companies such as housewares and kitchen-utensil company Alessi come to collaborate on new applications. Small companies, too, are beginning to capitalize on concrete's diversification.

Crea, a family-run construction-grade concrete facility in the mountains north of Brescia, was close to bankruptcy before designers Paolo Lucidi and Luca Pevere looked them up in the Yellow Pages in 2007. The duo, who call themselves Lucidi Pevere, needed help casting a delicate concrete lamp shade for the manufacturer Foscarini.

"We were the first designers ever to approach them," Pevere says, "and they were not interested in it. They didn't know they could make an income from that."

Giampietro Piccinelli, Crea's 80-year-old founder and master, said a one-kilogram shade with a short, thin neck would be impossible. But the designers, suspecting he simply hadn't done anything like it before, persisted.

"The big research was on the kind of concrete," Lucidi says. "This concrete was too liquid, so when we extracted the piece from the mould, it broke the neck."

Crea's bespoke mix purged all the larger stones and added short fibres to give it the perfect fluidity without the large bubbles that often appear on industrial surfaces. Getting the light to work took two-and-a-half years of trial and error. They launched it as the Aplomb in 2010.

Lucidi Pevere launched a thinner, broader update of the Aplomb last month, by which time Crea had recast itself as an artisan concrete studio and picked up high-end clients such as FontanaArte and Flos. "They only work with designers now," Lucidi says.

But not these two designers. Just when it seems all their peers are getting into concrete, Lucidi and Pevere are getting out.

"Now too many companies call us to do concrete pieces," Lucidi says, "so we decided to stop. Otherwise we are 'the concrete duo.' "

Guillermo del Toro’s The Shape of Water illustrates how wallpaper can create an entire world
November 30, 2017 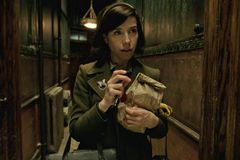 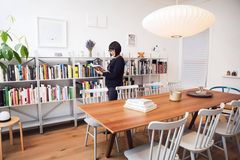 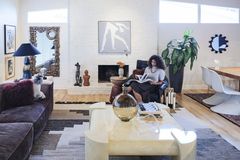