My dining room ceiling is pink.

Please don’t try to picture it. I need to clarify something first, because I know what you’re thinking. This is a respectable pink, a serious pink. It’s a shade that says, “Gee, your complexion looks luminous,” without calling to mind wads of bubblegum or wisps of ballet tulle.

The hue in question is a Farrow & Ball confection called Calamine (No. 230). According to its English creators, the pigmenteurs célèbres of the paint world: “Colours like this one appeared regularly in country house anterooms and boudoirs from the 1870s on into Edwardian times.”

What’s not to love about something that sounds like The Best Little Whorehouse in Downton Abbey? Calamine, you say? I was in with both brushes.

“Hey, it’s better than I thought,” said Derek, the painter, as he rolled the first coat. This was no insignificant triumph. I owned a house I loved, and I had a pink ceiling. Things were looking rosy.

I live alone, and I’m in good company. According to the last census, there are 3.6 million of us – that’s 27 per cent more single-person households in Canada than 10 years before. And I’ll bet my calamine-coloured ceiling that the number continues to rise after the next count in 2016.

Then, there was release in April of Spinster: Making a Life of One’s Own, author Kate Bolick’s paean to perpetual singlehood that made headlines and bestseller lists across the continent – a testament to our collective interest in solitary life.

The living room in Beth Hitchcock’s suburban Toronto home suggests she is mixing and matching to her heart’s content. (Photo by Kevin Van Paassen for The Globe and Mail)

Although it’s not known how many Canadian solo dwellers are women, it’s worth noting that 54 per cent of the 31 million Americans living alone are female.

Not only are women living on their own, they’re buying on their own, snapping up properties at almost twice the rate of single men since the mid-nineties, according to a 2013 study from the U.S. National Association of Realtors.

In explaining the discrepancy, Walter Molony, the association spokesman, told The New York Times: “It may be as simple as most guys don’t get serious about housing until they meet the right woman.”

North American women, on the other hand, get serious about housing as soon as they meet the right house. Aesthetically speaking, that coupling has given birth to a new boldness.

“I’ve absolutely noticed a change in the last few years,” says Brendan Kwinter-Schwartz, a Canadian designer who’s based in New York. “More single women are contacting me and they’re forging ahead with their plans. There’s no longer a feeling that they’re waiting around.”

Tiffany Pratt, a Toronto stylist and star of the HGTV show Buy It, Fix It, Sell It, says there’s more demand than ever for her one-of-a-kind art installations. “Women aren’t just asking for help with paint and fabric any more, they’re taking risks,” she says. “One client allowed me to spend $800 on ribbons and lace for a custom chandelier. Another let me do all the fixtures in her bathroom bright red, her favourite colour, from the faucets right down to the drain.”

Those, she says, are just two of 20 examples she could mention. For women, it turns out, the best part of the demographic shift toward living alone is that they – or should I say, we? – can create the homes they want, confidently and without compromise. 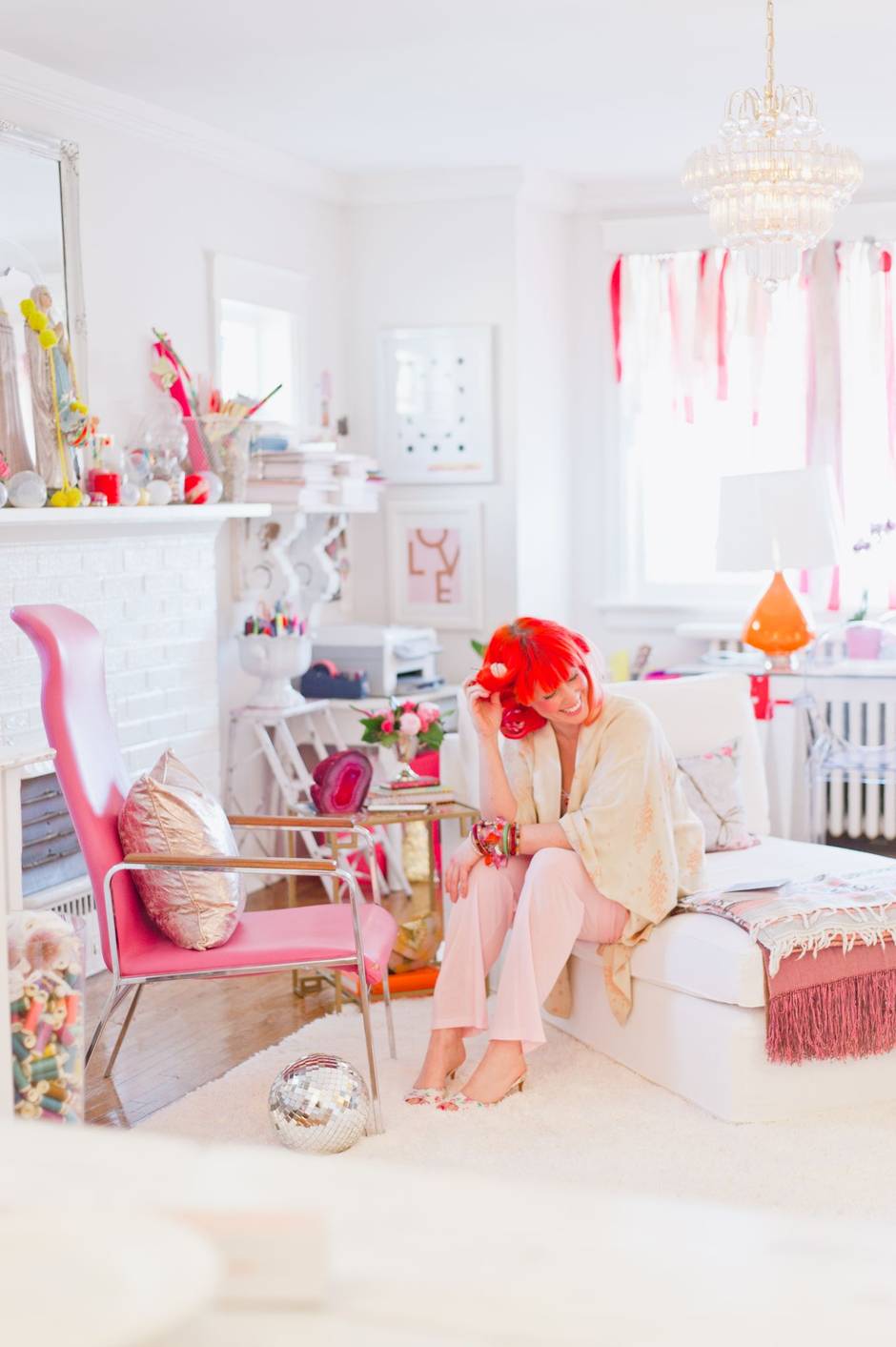 Tiffany Pratt goes wild with white and splashes of pink for her home decor. ‘To be in this space that I’ve spent so much time making special, it’s like ongoing therapy,’ she says.

“You’re so lucky,” say all the coupled-up women who’ve walked through my door since I bought my house four years ago.

One friend, admiring the crisp white baseboards, trim and mouldings, despaired that her husband wouldn’t paint the woodwork in their 60-year-old house. Judging by my extensive research (read: marathons of House Hunters), woodwork-protection is coded into straight men’s DNA. Another married friend longingly described a pair of vintage pink wall-mounted sinks she was dying to buy for an upcoming bathroom renovation. They continue to gather dust in the salvage store. Yet, another pal shared that the only bedding her husband would agree to was a steely shade she called “blay” – neither truly blue nor grey. She acknowledged with a sigh that it was just one letter away from “blah.”

Now in a three-year relationship, Bolick, who previously worked as an editor at the decorating magazine Domino, is considering co-habitation. “My boyfriend jokes that my place is full of curlicues,” she says, admitting it won’t be easy to merge their styles. “I definitely have an emotional attachment to my furniture.”

Most days, I feel lucky I don’t have to consult anyone about the front hall light fixtures (refurbished flea market Moroccan lanterns) or new headboard (upholstered in flax linen with nailhead trim). When I say to my friends that any man moving in with me would need to share my design opinions or have none at all, I’m joking, of course. But the truth is, decor-compromise makes me nervous.

Kwinter-Schwartz says that when she works with couples, it’s always the women who give up their voice – and their vote. “Women tend to defer to their partners and say: ‘Oh, I really love that but he won’t go for it.’ I never hear that from the men.”

“It’s hard to find the right balance,” Bolick agrees. “But when you live alone, I think it’s crucial and empowering to create a space you love while leaving room for the idea of someone else.” 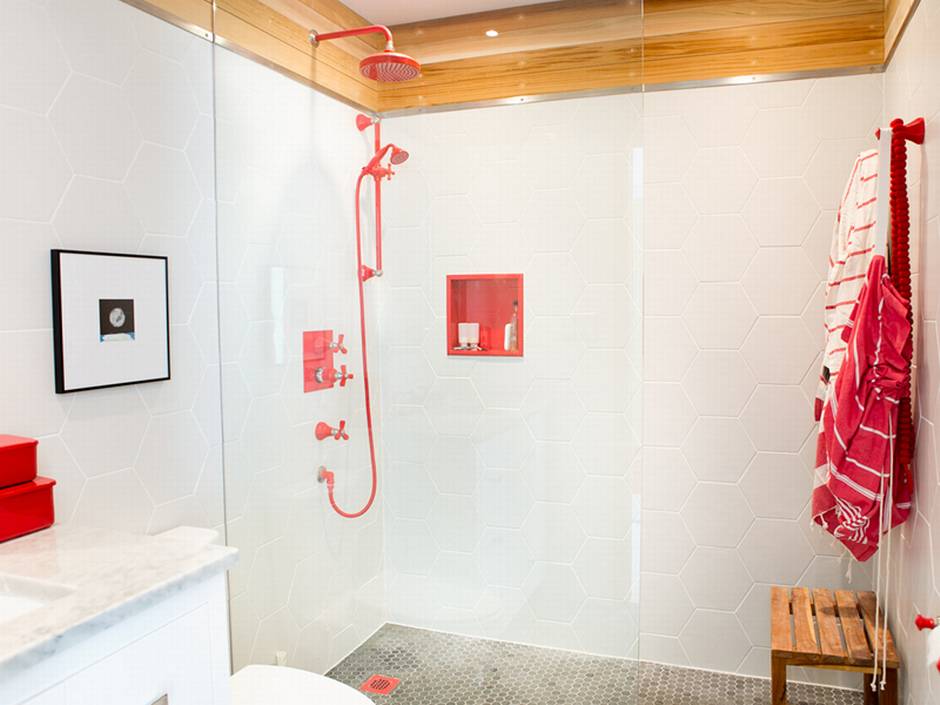 One of Tiffany Pratt's clients had her do all the fixtures in her bathroom in bright red, her favourite colour.

Do you want one sink or two?” the contractor asked when I was renovating my bathroom two years ago.

“Oh, just one,” I replied with an awkward laugh. “I mean, probably one. Why would I need two just for me?”

My hesitation was Meryl Streep’s fault.

To be fair, the voice of her character from the last Nancy Meyers movie was playing on a loop in my head. In a short but pivotal scene from It’s Complicated, Jane, the divorced protagonist, is poring over the blueprints for a long-desired renovation.

“I have one tiny note now,” she says to the architect, played by Steve Martin. “No His and Her sinks.”

When he gently inquires if she might some day want a “His,” she explains, flustered: “The truth is, in my current bathroom, I have two sinks and sometimes the other sink makes me feel bad.”

“Go for the other sink, Jane!” I wanted to yell at the screen. “It’s okay to want a second sink.”

Still, I understood her dilemma: Living alone can be lonely business. For every hour of empowerment, there’s a flash of emptiness and even, sometimes, neediness. You don’t get to yell, “Honey, I’m home!” or rouse someone from sleep when you hear a strange noise. To accomplish anything as a solo-female homeowner, you just have to grit your teeth and D.I.Y. That’s why any time I read or overhear things that attempt to trivialize decorating as a traditionally feminine – and therefore non-essential – pursuit, my blood boils. One headline in this very newspaper back in 2012 asserted, rather unpopularly, “Obsessed with home decor? You may have self-image problems.”

Bolick writes in Spinster that decorating has been denied the true respect it deserves. “There’s a long history of rigid gendering at play,” she explains. “Architecture was revered because it was a male sphere, but decorating became viewed as a ‘lady’s hobby,’ so it was denigrated. Even recently, home decorating wasn’t taken as seriously as fashion.”

But with the explosion of Instagram and Pinterest, a revitalized decor magazine category, and the surge of women buying and living alone, there’s never been a better time to celebrate the power of place.

“Living on my own the last six years has given me a chance to enjoy my own style, my own company and even my own silence,” says Pratt, the Buy It star, whose home is such a carnival of colour, pattern and sparkle that her friends and family affectionately dubbed it the Glitter Suite.

“To be in this space that I’ve spent so much time making special, it’s like ongoing therapy,” she says.

Pratt’s words echo what I’ve learned. When you’re a woman who lives alone, decorating isn’t just a hobby: it’s a statement, a rallying cry, a feminist act. It takes guts to find your style, make decisions and create a home, even when – especially when – your life may not have turned out as expected.

In the end, I decided on two sinks for my marble-topped bathroom vanity: Hers and Also Hers. I alternate between them, depending on the day, the light, and my mood. Sometimes, I start brushing my teeth on one side and finish up with a rinse and a spit in the other basin. Just because I can.

Beth Hitchcock is the former executive editor of Canadian House & Home magazine. She is working on her first book, a home-makeover memoir.